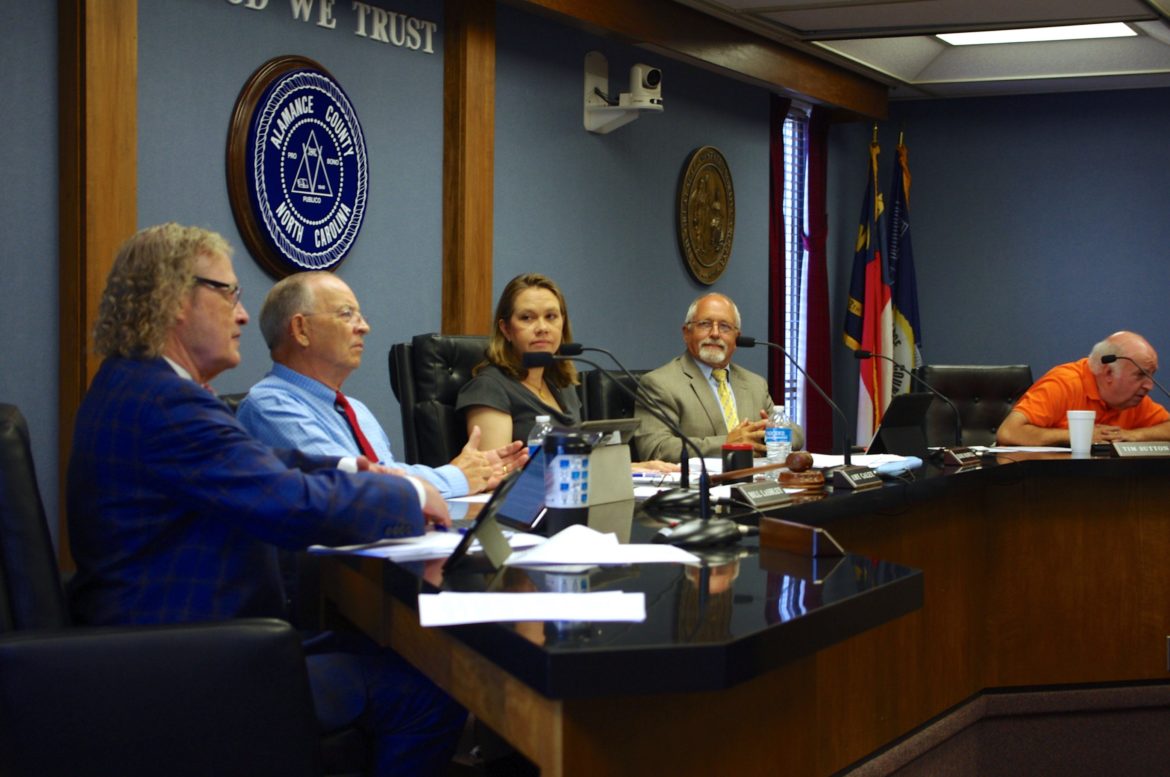 When Alamance County passed a resolution last week against a proposal to expand the Mountain Valley Pipeline into north central North Carolina, it became the first county in the state to formally voice opposition to an interstate gas pipeline.

“We’re plowing new ground,” said Commissioner Bob Byrd after the unanimous vote. “I’m generally considered the more progressive person on this board, but I was pleased that we all came together on this particular one.”

The declaration by the board of four Republicans and one Democrat was submitted to federal regulators before September 10th, the first public comment deadline for a pipeline that’s still in the early stages of development.

Though the conservative, rural county has no regulatory authority over the pipeline, its action could signal trouble ahead for the project.

“It’s important for our county board to stand with its constituents,” said Daniel Bollinger, a landowner in the Mountain Valley Pipeline extension’s path. “They don’t have any legal control over whether it’s permitted or not, but their voice will speak volumes.”

Alamance County’s action against the pipeline, called MVP Southgate, contrasts sharply with the warm reception the Atlantic Coast Pipeline has received from local governments 100 miles east. That’s in part because the projects have different histories, backers and justifications.

The Southgate project would extend the Mountain Valley Pipeline past its original terminus in Virginia into North Carolina, running through rural Rockingham and Alamance counties. The two-foot wide pipe will skirt the Haw River, cross the Dan River, and impact dozens of their tributaries. Backed largely by out-of-state gas companies, it will serve gas to residential and business customers of the local gas utility, PSNC Energy, via two planned connection points near the towns of Graham and Eden. About half of the 72-mile Southgate route is parallel to the state’s only existing interstate natural gas line, Transco.

The 600-mile Atlantic Coast Pipeline, a third of which is routed along the state’s I-95 corridor, would traverse eight counties and hundreds of waterways and forested wetlands. Its main purpose is to supply gas for the state’s dominant electric utility, Duke Energy, and it’s buoyed by a long-held belief in eastern North Carolina that an added supply of fossil gas will recruit new industry to the region.

Eager for economic development and generally trustful of Duke, many counties along the Atlantic Coast Pipeline’s route began endorsing it in 2015. Only Nash County remained neutral, while Wilson County issued expressed concern about how the pipeline would affect landowners without taking a position on the project itself.

Halifax, Northampton, Robeson, Sampson and Johnston counties are all part of the EnergySure Coalition, the group organized by pipeline investors in support of the project. Cumberland County also gave it an early blessing.

Support for the Atlantic Coast Pipeline hasn’t just been limited to county governments. From members of Congress to Republicans and Democrats in the state legislature, scores of other politicians backed the project, many during its initial planning phase, a period called ‘pre-filing.’

“I…urge the Commission to act swiftly to approve this project,” wrote GOP Congressman David Rouzer, who represents pieces of two counties along the pipeline’s route, in an April 2015 letter to the Federal Energy Regulatory Commission. “My citizens are waiting.”

‘The tide is turning’?

Southgate is now in pre-filing mode and its backers hope to begin operating in 2020. But it has yet to draw formal evidence of support from any North Carolina elected body or politician of either party.

Congressman Mark Walker, a Republican who represents both Rockingham and Alamance counties, took a different tone than Rouzer in his own letter to FERC from June of this year.

“It appears that Mountain Valley Pipeline wants to bring this pipeline…through what is primarily farmland and the opposition to that is very strong from the landowners,” Walker wrote. “If homeowners and the community are uniformly opposed to this coming through the area, please advise how their voices can be heard.”

Rockingham County is home to powerful state Senate leader Phil Berger, an outspoken supporter of the Atlantic Coast Pipeline. Federal regulators have no public statement from his office regarding Southgate. 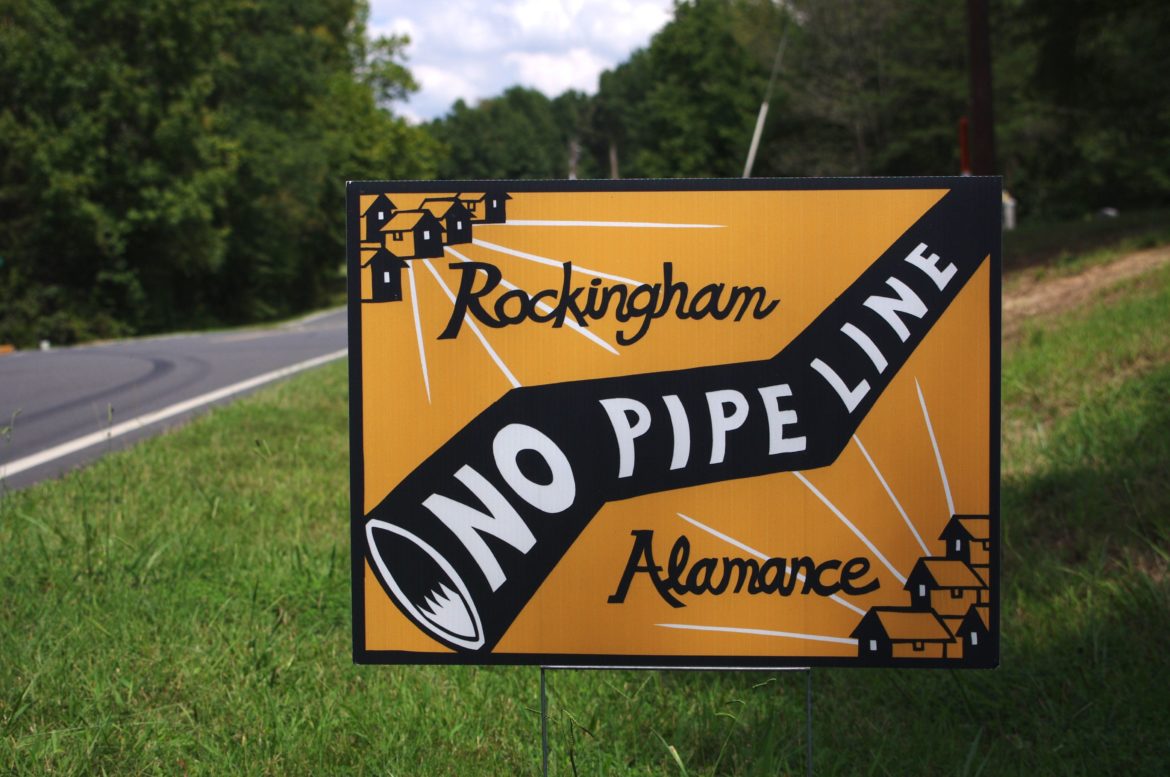 Most significantly, Alamance County commissioners denounced the pipeline in no uncertain terms, listing an array of threats to the area’s rivers, streams, and groundwater supplies, and noting that the project may be driven more by a profit motive than public necessity.

Commissioners were so intent on taking a stance against the pipeline that they had to overrule their full-time county attorney, Clyde Albright, who twice presented versions of the resolution they deemed too favorable to the project.

Commissioners tabled their August vote after Albright’s first draft fell short. When the document presented at their September 4th meeting was little improved, they rewrote it on the spot, debating each supporting clause.

They inserted a sentence referencing concerns they’d heard minutes before that the pipeline could threaten the cemetery and expansion plans for Arches Grove United Church of Christ, a small church in Burlington along the pipeline’s path. They added a conclusion voicing strong opposition to the pipeline. The final resolution drew applause from the crowd and immediate praise from environmental advocates.

“Alamance County’s unanimous stand against the proposed Mountain Valley Pipeline extension is the latest evidence that the tide is turning against these dirty, dangerous fracked gas pipelines,” Sierra Club’s Beyond Dirty Fuels campaign representative Joan Walker said in a statement.

Commissioners cited a tide of public opposition to the project as the primary reason for their action. In phone calls, emails, and testimony before the board, many citizens had pointed to the impact the pipeline could have on land they’d planned to pass down to their children and grandchildren.

“I’d like to take the opportunity to thank the public for its participation in this discussion,” board chair Amy Scott Galey said at the September meeting. “This has been real heartfelt for you all, and I hope that as things unfold from here that you get the results that are the best for your families and your future.”

Galey, a Republican, and Bryd, the board’s sole Democrat, are competing in a field of four for two commissioner seats this November.

Many affected landowners became aware of the pipeline’s potential dangers because of the attention garnered by the Atlantic Coast Pipeline. Southgate’s impact on the Haw River was also a motivating factor for commissioners, who detailed its importance in their resolution.

“We are thankful the Alamance County Commissioners understand how vital the river is to the community,” said Emily Sutton, riverkeeper at the Haw River Assembly.

Commissioners bristled at the notion that the for-profit pipeline company could eventually cross the property of uncooperative landowners using eminent domain, a procedure they felt should be reserved for more traditional public purposes.

“My personal opinion is that eminent domain is wrong [if it] doesn’t actually go to the public benefit,” Commissioner Eddie Boswell, a Republican, said after the vote. “I have a problem with that.”

Duke Energy’s lack of involvement in the pipeline also factored into another conservative commissioner’s decision, who objected to materials he’d seen from one of the pipeline’s investors that emphasized its money-making objective. Interstate gas projects earn a 14 percent rate of return.

“When it’s in the first sentence of their mantra that their main goal is profit, I come down on that,” said Commissioner Tim Sutton. “I’m sorry. I don’t believe Duke Power would have ever written that.”

The lack of a big corporate backer for Southgate like Duke may not matter for long: PSNC could soon be a subsidiary of Dominion Resources, the other utility behind the Atlantic Coast Pipeline. The gas company already has an ownership stake in Southgate, and is also seeking special permission from state regulators to become the pipeline’s main customer.

Previous studies targeting the Atlantic Coast Pipeline and Mountain Valley Pipeline have found them unnecessary, but anti-pipeline advocates haven’t conducted their own analysis to determine the need for the Southgate extension.

At the same time, the state’s utilities commission issued an order in 2013 suggesting that an additional interstate pipeline could benefit gas customers. The ruling appears to be a key talking point for pipeline investors.

“The regulatory body has said they’re going to need additional gas,” said Rob Shinn, a consultant working with Nextera Energy and other pipeline backers, “and that’s one of the real drivers for this.”

Alamance County commissioners weren’t persuaded by that argument, and neither are many pipeline opponents one county north in Rockingham. There, the community is still recovering from the impact of another fossil fuel project: the 2014 coal ash spill that coated 70 miles of the Dan River in toxic sludge.

“They’re not taking any consideration of the locals, the environment,” said David Wells of the volunteer-driven Good Stewards of Rockingham County. “How they’re going to get under the Dan River without messing something up is beyond me.”

That’s in part why Wells and others hope that Rockingham government officials will take a cue from Alamance. Next up is Stoneville, scheduled to debate an anti-pipeline resolution on October 2nd.

As for the big prize, the Rockingham County Board of Commissioners, Brooks Miller, another anti-pipeline activist, said simply, “hopefully they’ll follow suit.”