A new roadmap for the future of Ohio’s electric grid can benefit all types of interest groups, but the next few years will be critical for the plan to achieve its goals.

“I think there’s something in here for everyone,” said Asim Haque, chair of the Public Utilities Commission of Ohio. The PUCO released its PowerForward report on August 29 after hearing approximately 100 hours of testimony from 127 speakers over multiple days.

At issue is how the state’s utilities will provide a resilient distribution system in the years ahead as much of the current system ages and new technologies for control and data collection  advance.

Meanwhile, Ohio’s customers, advocates and companies have embraced market competition. And the country’s energy mix is changing, with the share of renewable generation rising as generation from fossil fuels declines.

In a way, Haque said, the state will be thoughtfully rebuilding each of its regulated distribution utilities’ grids “from the ground up.”

The grid as a platform 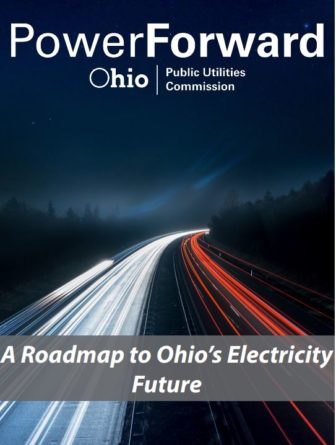 “The commission believes the grid should serve as an open, secure-access platform, firm in concept and uniform as much as possible across our utilities,” PUCO vice chair M. Beth Trombold said when the plan was released. “Platform” in this context means a stable set of hardware and software for multiple uses through accessible standard interfaces.

Think of the Uber or Lyft platform as a system for ride sharing. Or YouTube or Twitter for video or social media. Individual companies own the hardware servers, software and other equipment that make up those platforms. But drivers or content providers anywhere can offer services or publish material by accessing the platform. And individual users can customize the products they get on their computers or mobile phones, the roadmap explains.

In a similar way, utilities would continue to own the large networks of equipment and software that accept electricity and deliver it to customers in their service territories. But more companies could then use that platform to sell electricity, offer energy efficiency programs, provide electricity management or use analyses, or supply other services in a competitive marketplace.

A uniform open access system like that would be a shift from the current system where utilities are basically gatekeepers that decide what services besides electricity generation are offered.

“This open access platform really is the best possible way to move forward in the state,” said Trish Demeter, vice president of energy policy for the Ohio Environmental Council.

From her perspective, it would allow for more distributed energy generation on the grid, including wind, solar, and combined heat and power. That could enhance reliability by encouraging more microgrids and getting more energy suppliers on the grid at sources closer to where the electricity is used.

So far, however, Ohio has a variety of obstacles to the open platform, Demeter continued. Connection tariffs, standby charges for backup power, and other fees add to the costs and extend the payback period for investments in combined heat and power, for example. Limits on net metering do the same for solar or wind.

The PUCO heard oral argument last January on challenges to its November 2017 rules on net metering. The case remains open. The PowerForward roadmap does not address net metering or standby generation, except to say that state policy encourages implementation of distributed generation “through review and update of rules.”

Review of net metering issues was already proceeding in the pending case and will be decided there, Haque said. Likewise, review of other rules every five years will provide the framework for following the PowerForward roadmap.

“We actually don’t believe we need any new legislation or any new rulemaking” to put the PowerForward roadmap into action, Haque said. Ohio has little renewable energy on its grid, but planning committees will address how to add more, Haque added.

Demeter is hopeful as long as committees actually implement the plan in a way that removes barriers to access. “We have hope that they are really truly open collaborative processes,” she said.

“We are excited to see the PowerForward Roadmap focuses on the importance of building a smarter electric grid to meet the needs of our customers,” said American Electric Power spokesperson Scott Blake. AEP Ohio already has smart meters in some of its service area and is starting a pilot electric vehicle charging program under its latest rate plan.

On the other hand, FirstEnergy, Duke and Dayton “are literally at their origin” for getting smart grid technologies in their Ohio service areas, Haque noted.

“Ultimately, we believe an advanced energy infrastructure will be shaped by our customers’ core needs — reliability, affordability and safety,” said FirstEnergy spokesperson Doug Colafella. “We also recognize that smart grid modernization comes at a cost, and we’re committed to working with the PUCO and other key stakeholders toward an implementation plan that makes sense for customers.”

The PowerForward plan acknowledges these capital investments, but it also calls for cost caps to protect “gold plating.” That’s a practice where regulated monopolies choose more expensive options in order to earn a bigger return on investments.

“We will also ensure that we can do a backwards look” to review grid modernization charges, Haque said. Starting with recent settlements, the PUCO will require utilities to agree to refunds or adjustments in rate plans. That should address problems caused by the Ohio Supreme Court’s recent rulings allowing unlawful charges to stand because of an earlier case on “retroactive rulemaking,” Haque said.

The structure for future rates is also an open question. At the moment, “the ratemaking construct in Ohio sort of is what it is,” Haque said. Utilities can seek approval of a general distribution system rate case, an “electric security plan,” or individual riders.

Within the last decade, however, Ohio’s electric utilities have generally moved away from overall rate cases towards electric security plans. Critics say those plans have allowed some cross-subsidies for affiliated generation providers and insulated companies from competition.

In addition, the PowerForward plan talks about decoupling,  or separating a utility’s profits from its sales. The concept can encourage energy efficiency and other customer services that could reduce overall usage.

A straight fixed-variable rate is one way to do that, where part of the distribution charge would be a fixed cost and part would depend on usage, the report says. “True up” mechanisms are another possible way to adjust customer rates at the end of each year. Multiple approaches are feasible, Demeter noted.

Haque stressed that all grid upgrades should provide net value to customers. And as grid upgrades are made, data from smart meters or other equipment will belong to customers rather than utilities. Utilities will also need to provide timely access to that data at a “granular level” for customers or whomever they designate.

Those provisos address customer privacy concerns. They can also help customers make informed decisions about investments in solar power or other renewable energy, Demeter said. And detailed use information opens the door for a variety of technologies and services for energy efficiency and savings on customer bills.

Haque said feedback on the plan so far has been positive. Moving forward, “it behooves everyone to be as transparent as possible” and to express how each charge is going to provide value to customers, he said.