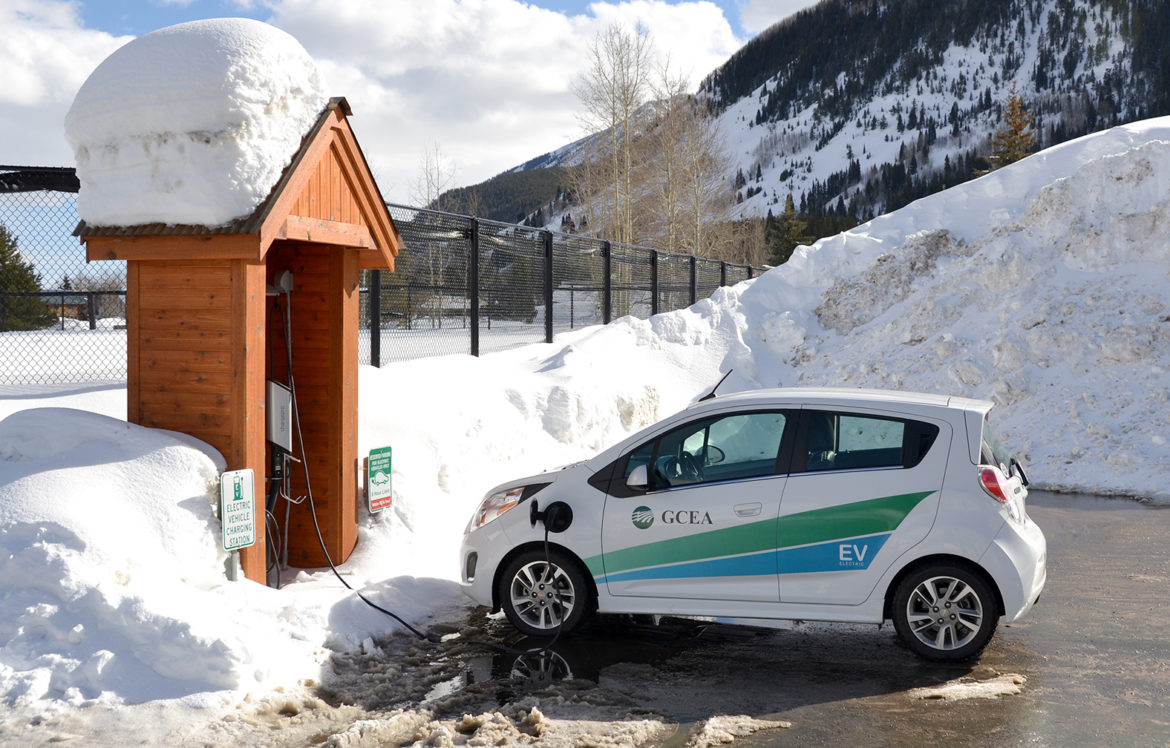 "Spark-e" is one of the Gunnison County Electric Association's electric cars available for members to test-drive.

As Colorado seeks to encourage adoption of electric vehicles, two rural cooperatives are charging ahead where other utilities have so far hung back.

The co-ops, both located in mountainous, resort-oriented areas, say transportation electrification benefits their members and hence lie within the traditional realm of co-op responsibilities. One has gone so far as to offer loaner cars for test drives.

But for co-ops, as well as for other utilities, EVs represent opportunity to grow demand and sales that has been flattened in recent years by advances in energy efficiency. This growth can then be used to justify additional investments in renewable energy.

“The whole objective of rural co-operatives is to serve the needs of its members. A lot of our members are very interested in using more clean energy, including clean electricity to power their vehicles,” says Bryan Hannegan, chief executive of Holy Cross Energy.

The nearby Gunnison County Electric Association makes a used Chevy Spark and a used Nissan Leaf available for week-long loans to its 10,800 members. The intent is to give the users “the real ownership experience,” says chief executive Mike McBride.

McBride says he believes Gunnison County was the first co-op in the country to adopt the loaner program.

Another incentive provided by the co-op is a 10 percent rebate, up to $350, for members who choose to install Level 2 chargers, which can recharge a car in 4 to 6 hours.

“The only catch is that they have to be on the time-and-use rates, which have strong incentives to charge during non-peak periods,” says McBride.

Across the Elk Range, but nearly four hours away by car, directors of Glenwood Springs-based Holy Cross Energy have allocated $700,000 to reduce “range anxiety” among its 43,000 members and spur installation of charging stations in homes and businesses in the Vail-Glenwood Springs-Aspen areas.

“We definitely believe in the electrification of transportation, because electric vehicles are much cleaner than gasoline or diesel vehicles, even after accounting for the emissions from coal and natural gas used to generate the electricity,” says Jenna Weatherred, spokeswoman for Holy Cross. “And we are working hard to provide a cleaner supply every day.”

Holy Cross has an 8 percent interest in the nation’s newest coal-fired power plant, Comanche III, which began operations in 2010. Altogether, 53 percent of Holy Cross’s energy comes from coal, 6 percent from gas, and 39 percent from renewables. The coal mix will decline significantly by 2025 as Xcel Energy, a major supplier to Holy Cross, closes the two older Comanche coal stations.

A study by the Southwest Energy Efficiency Project found that driving an EV using Xcel Energy’s power currently provides the equivalent of greenhouse gas emissions of a 55 mpg car. By 2026, when the two Comanche plants are closed, the equivalence will rise to 88 to 90 mpg cars.

The first program offered by Holy Cross seeks to push installation of Level 2 chargers in homes and businesses. Such chargers normally cost $300 to $650, plus installation costs. In September and October, Holy Cross members will be able to get up to $650 in rebates when they purchase the chargers. In November, the co-op will begin providing members with free chargers and on-bill financing of less than 3 percent for installation of that charger by one of Holy Cross’s chosen electricians. The Rural Electrification Services provided funding. Altogether $600,000 for this program has been allocated.

“I don’t know if any other co-ops that are being as aggressively financially,” she adds. “We really want to help our members make the switch.”

Despite the great wealth of Aspen, and Vail, too, the area served by Holy Cross is not uniformly wealthy. Many of Aspen’s workers, in particular, drive long distances, some 65 miles each way, often in aging cars or SUVs that get poor fuel economy.

“That is where we need to get EVs,” says Matthew Shmigelsky, an energy consultant to Clean Energy Economy for the Region, or CLEER, a community nonprofit.

To ramp up demand, CLEER has worked with auto dealers in the last two years to offer discounts for EVs. Last year, the effort fell 8 cars short of the goal of 50. This year, CLEER has six dealers participating. In its promotions, it stresses cost savings of fuel: $1.10 for electricity that provide the equivalent power to that of a gallon of gasoline.

Shmigelsky says that the foundational shift in transportation fuels will require a new level of interaction with consumers. “As much as Bloomberg can project a 25 percent increase in EVs by whatever date, it’s all pie-in-the-sky until people show up at the dealer to buy.” Initiatives such as that of Holy Cross and CLEER matter entirely, he adds.

Colorado ranks 22nd in population, eighth in geographic area, but fifth in EV sales as defined by percentage of new sales, according to the Alliance of Automobile Manufacturers. A recent study projected one million electric vehicles on its roads by 2020, but as of June only 14,907 EVs had been sold in the state. This is despite a $5,000 income tax deduction for purchase, $2,500 for lease. CleanFleet Report in 2017 said that these and other financial terms were the “best incentives in the country for electric vehicles owners.”

Charging infrastructure, though, has lagged that of some other states. In January, the Colorado Electric Vehicle Plan identified how Colorado will use $10.3 million available to the state through the Volkswagen settlement.

“By the end of 2019, there should be five major corridors across the state with fast chargers every 30 to 50 miles, and the work of Holy Cross very much complements that,” says Will Toor, transportation program director for the Southwest Energy Efficiency Project, an advocacy group. “A year from now we will basically have a fast-charging network to access every major destination in the state.”

Toor says the work by the two co-ops makes them exceptional in Colorado because of the lack of aggressive action by most utilities. That may change. The Colorado Public Utilities Commission in June appointed a large task force of diverse stakeholders with the task of delivering recommendations by late November. The core question is how Xcel Energy and other utilities can equitably assist the growth of the EV marketplace.

Holy Cross and other utilities remain largely outside the purview of the PUC, but they also have a vested interest in seeing more demand to supply EVs. The business model of distribution utilities has been fraying. It depends upon sales of electricity to pay for the rising costs of maintaining poles and wires. Sales, though, have flattened because of improved efficiency of new appliances, LED lighting, and other consumer goods has flattened energy demand. Like other utilities, Holy Cross has encouraged efficiency.

“Growth in demand from EVs may or may not be enough to offset the overall reduction in demand for electricity we are seeing as things get more efficient,” says Hannegan.