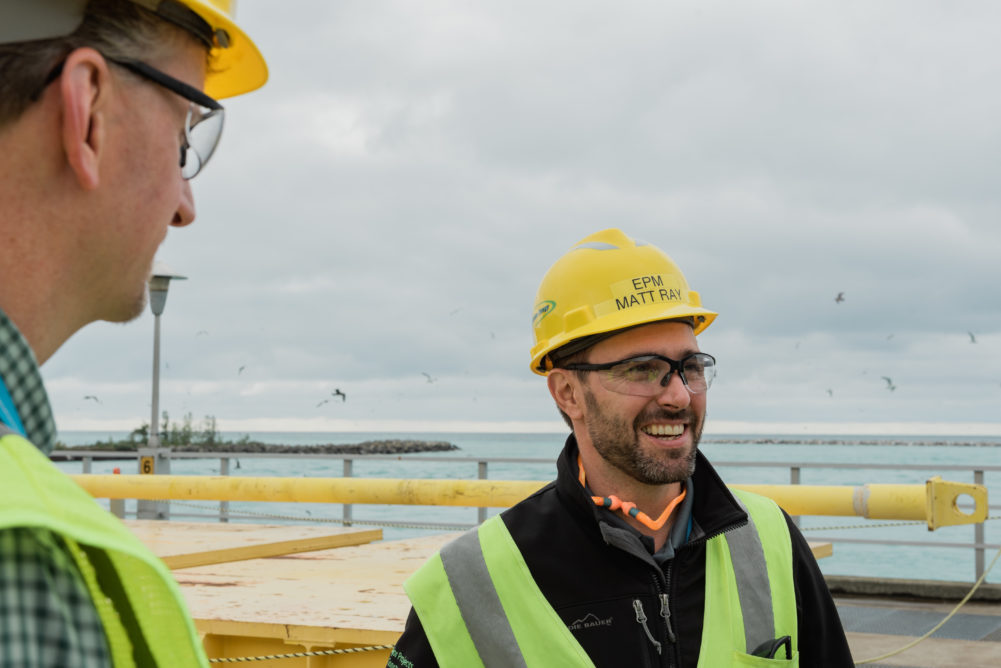 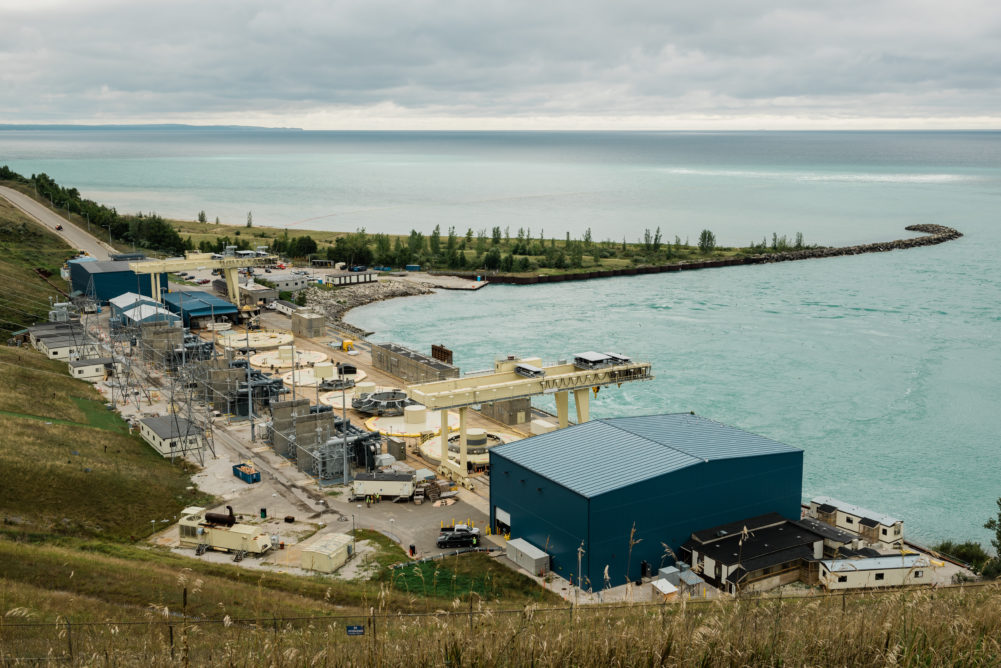 Consumers Energy and DTE Energy co-own the Ludington Pumped Storage plant along Lake Michigan. Next year, the completion of an $800 million overhaul of the plant's components will increase the plant's capacity to 2,100 MW. 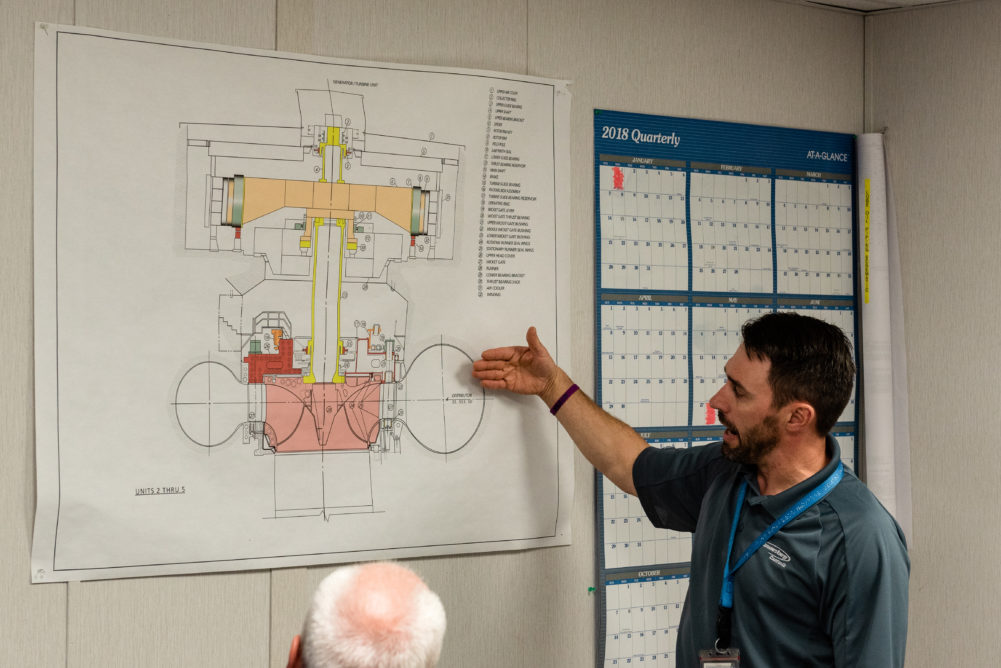 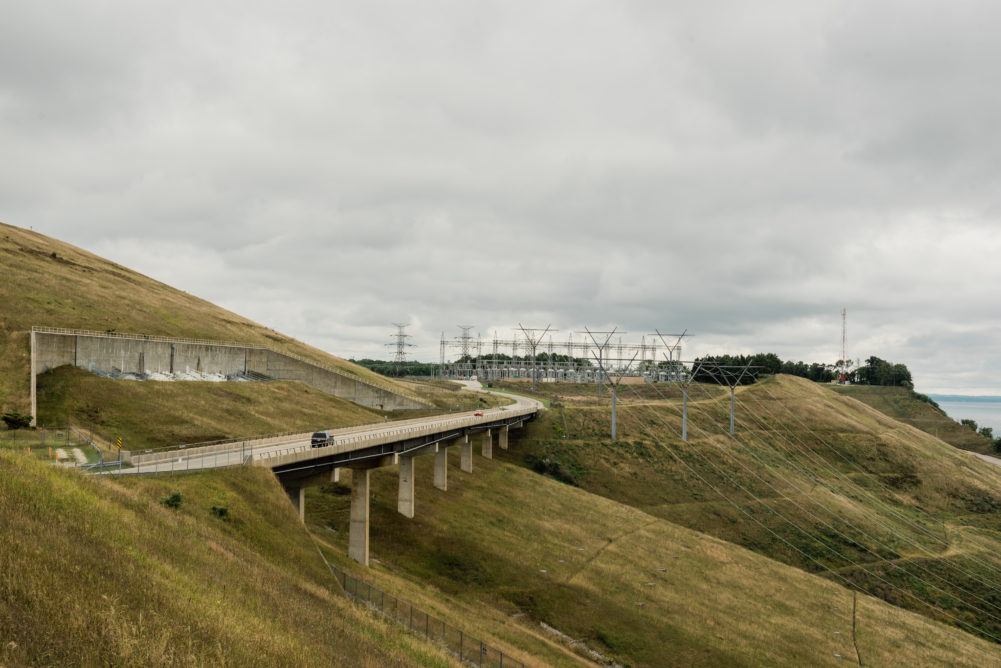 Cars pass over the Ludington Pumped Storage along Lake Michigan on Aug. 29. 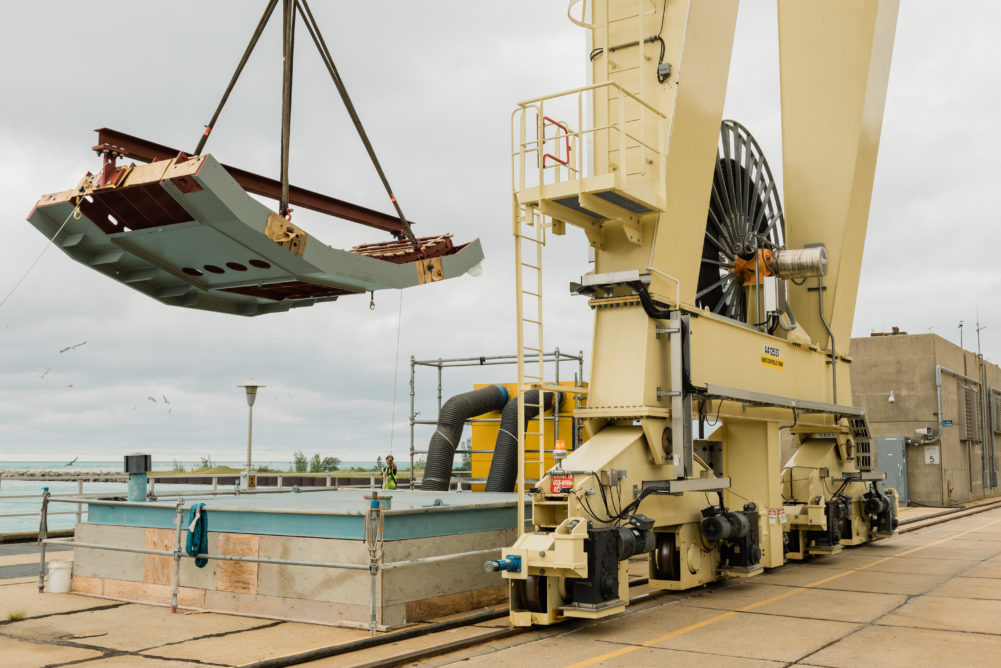 A worker moves equipment at the Ludington Pumped Storage plant on Aug. 29. 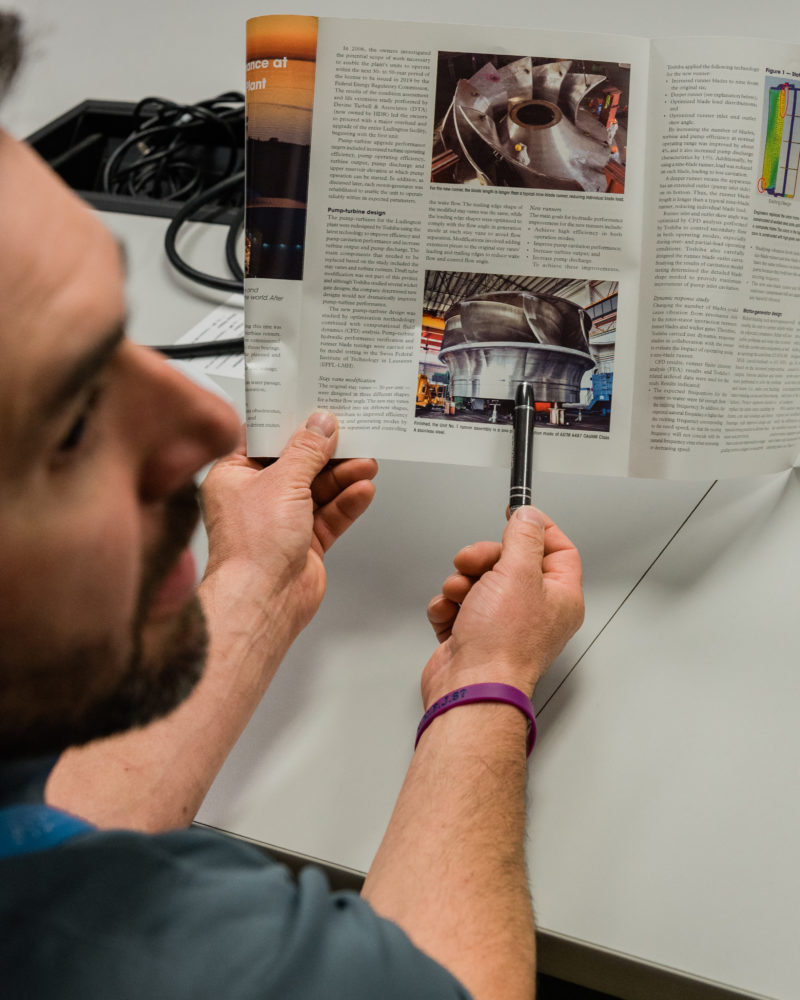 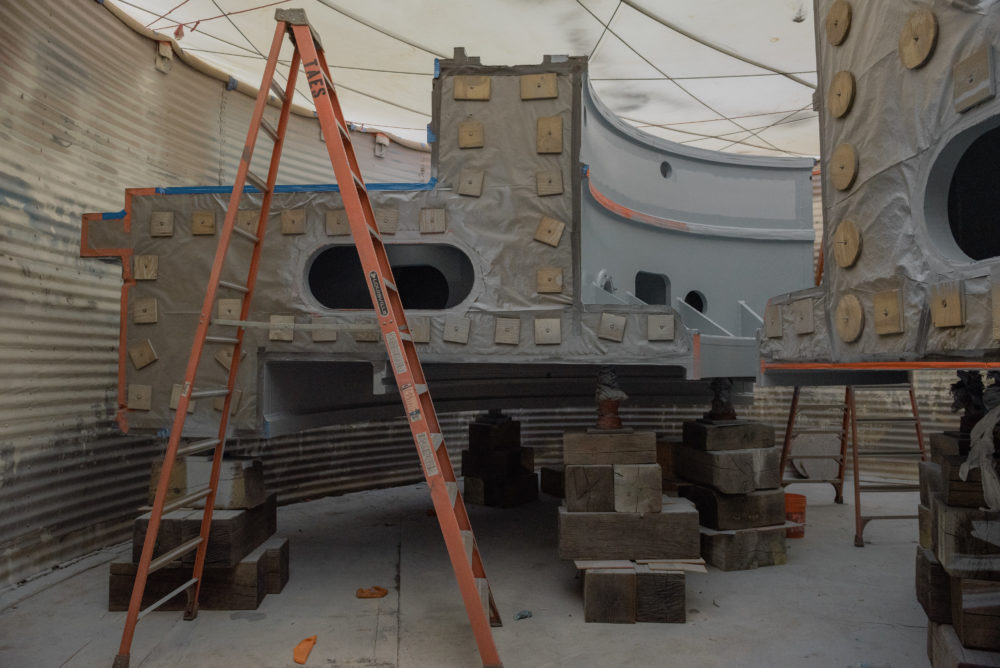 Turbine components sit inside the Ludington Pumped Storage plant on Aug. 29. The plant is undergoing an $800 million upgrade. 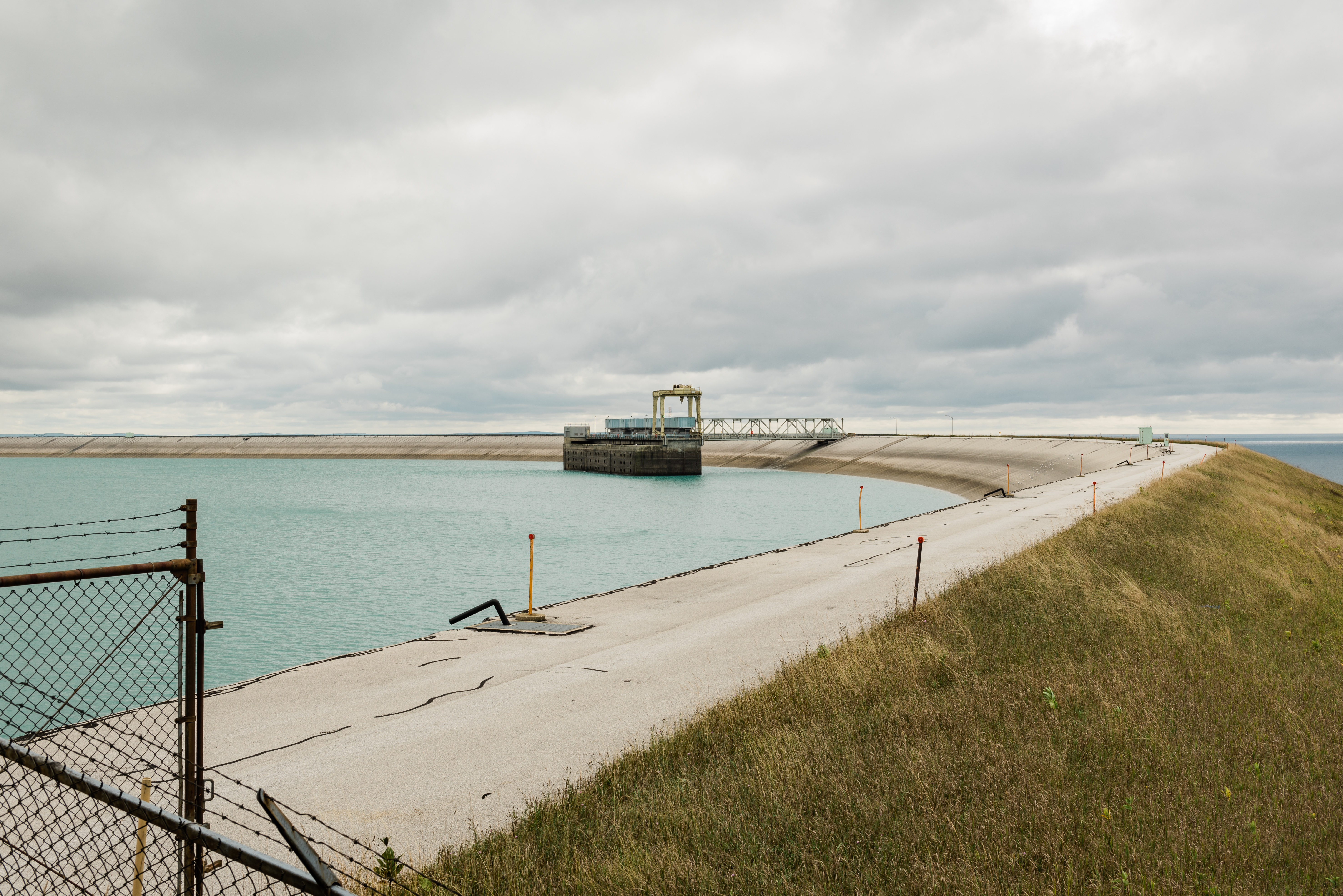 When electricity is cheap and plentiful, grid power is used to pump water from Lake Michigan into a reservoir at the Ludington Pumped Storage. 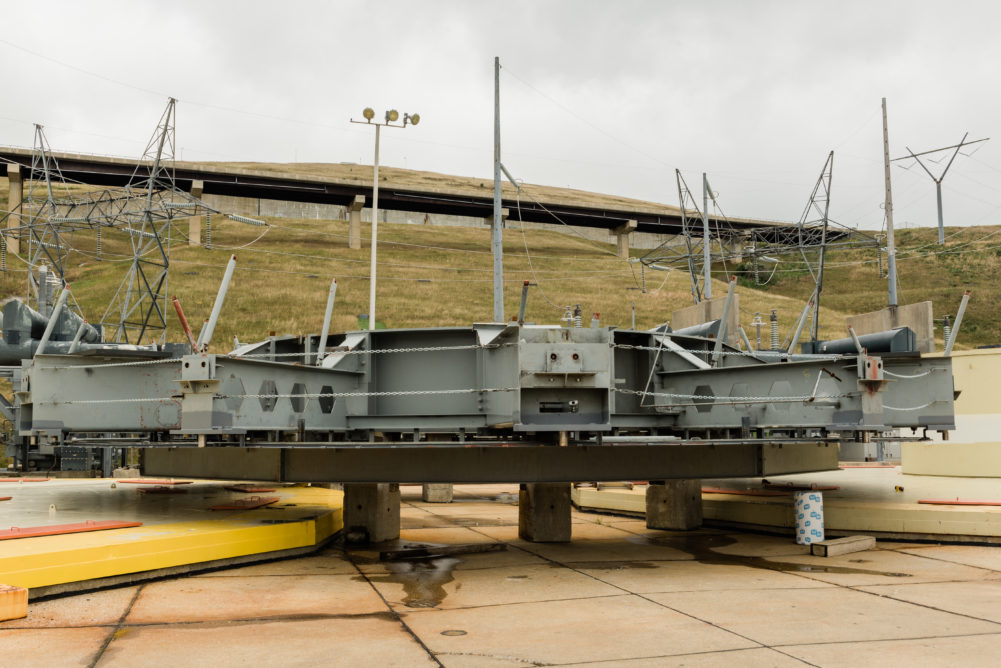 Turbine equipment at the Ludington Pumped Storage plant on Aug. 29. The plant is undergoing an $800 million upgrade.

The Ludington Pumped Storage Plant along Lake Michigan could play a bigger role on the grid as utilities use more variable renewables.

Concealed under a grassy slope, water pours through a set of massive chutes, pummeling a bank of underground turbines before spilling into Lake Michigan.

When electricity demand drops off, the turbines will reverse, pushing water back up the embankment into a massive reservoir overlooking the lake.

This is the never-ending cycle for the Ludington Pumped Storage Plant, which serves as a sort of giant battery for Michigan’s electric grid. When power is in demand, it can generate nearly 1,900 megawatts for the grid. When electricity is cheap, it uses grid power to refill its two-and-a-half-mile long reservoir.

The facility is among the oldest and largest of its kind in the U.S., and Michigan utilities are betting it will play an even bigger role as more variable renewables are added to the grid. The plant is in the midst of an $800 million upgrade that will boost capacity and extend its life another 40 years.

The Ludington overhaul was needed due to aging and faltering components at the 45-year-old plant, but it comes amid an industry’s shift toward more renewables and storage that could ultimately increase the value of the plant.

“It’s going to be a balancing resource when we have more renewables,” said Douglas Jester, a consultant with Lansing-based 5 Lakes Energy.

Consumers Energy plans to have a 40 percent renewable portfolio by 2040. In its first long-term integrated resource plan filed in June, Consumers said it expects to add 5,000 megawatts of solar to its portfolio in that time.

“If we as a society want to transition from fossil fuel to renewable energy, we need battery efficiency in pumped storage,” said Consumers’ project manager Matthew Ray. “As we go to more renewables, pumped hydro will be an even more critical asset.”

Time for an overhaul

Consumers first explored the need to upgrade Ludington around 2005 as components within the facility began to wither and buckle over time. Replacing each turbine takes a little over a year to complete. Consumers expects to complete work on the fifth turbine in early 2019.

“There’s a lot we learn with replacing each turbine,” Ray said. “We solve that problem and carry forward.”

The turbine components were delivered from China and welded at on-site machine shops. When completed, the upgraded turbines have more blades and operating efficiency that’s improved by about 5 percent.

“It’s performing close to or better than projected,” Ray said. “The ultimate capacity of the plant has met expectations.”

Ludington is already a key component of Michigan’s grid. Once the upgrades are complete, the plant will have enough capacity — 2,172 MW — to serve nearly 10 percent of the Lower Peninsula’s peak load. Its capacity will be 20 times the size of Consumers’ nearby Lake Winds wind project that came online in 2012.

“It’s a valuable resource for both capacity and for emergency power supply during the peak of the day if other plants go down,” Jester said. “And it can be turned on rather quickly.” It takes four minutes for water to run through the cycle and deliver power to the grid.

Rick Miller, senior vice president of renewable energy services for HDR, was an engineering consultant on the project more than 10 years ago, analyzing the potential for site upgrades. He calls pumped storage plants like Ludington a “shock absorber” in relation to renewables.

“Pumped storage allows greater buildout of wind and solar to make the grid work reliably. To the benefit of ratepayers, Ludington helps the entire portfolio operate more efficiently than without it,” Miller said.

While the plant acts as a giant battery by generating power during peak demand, it’s also reliant on the grid to pump the water up the hill when electricity prices are low. When lawmakers rewrote the state’s energy laws in 2016, some wanted to credit the facility as renewable, even though the pumping is powered by a mix of coal, natural gas, nuclear and renewable energy.

Ray said the ability to store coal on-site at plants for 30 to 60 days is an advantage to maintaining steady supply for a facility like Ludington. But he said coal retirements are not a concern, “It’s more planning and focusing on the pipeline components for gas. When we see a challenge, the industry reacts.”

Jester said the portfolio shift may also mean a shift in Ludington’s operations. In the next two decades, Consumers and DTE plan to close their remaining coal plants. Consumers in particular is calling for no new fossil few plants and an additional 5 gigawatts of solar.

“As the amount of renewables increases, the peak load net of solar is going to shift from the daytime to the evening,” Jester said.

While this transition may take a few decades, Jester said it’s possible that pumping times will shift to also include the daytime and discharge during the morning and evening.

“This would also complement wind, which tends to happen more in the morning and evening,” Jester said.

Jester says the plant adds flexibility to the grid, allowing base load plants like coal and gas to run more efficiently at night.

However, all generation is dispatched by the Midcontinent Independent System Operator, or MISO. Federal regulators issued an order in February directing grid operators to develop market rules for energy storage on wholesale markets.

MISO continues to collect stakeholder input, while some experts have said the federal order will “open the floodgates” for energy storage.

Once a market framework for storage is in place, Jester said the Ludington plant could save about $30 million a year by reducing power supply costs.

The Ludington site also benefits from having been in operation for 45 years, Jester said. Such a facility on the Great Lakes is unlikely to be built today, he said, and it provides value ahead of the fledgling battery storage market. In the future, though, Ludington may have to compete with more efficient batteries.

“The economics of Ludington in the future are dependent on the cost of batteries,” Jester said. “I’ve been stressing that Ludington succeeds economically because it’s already built. The flexibility to match generation to consumption is always going to be valuable, it’s just a question of whether newer technology outruns Ludington.”