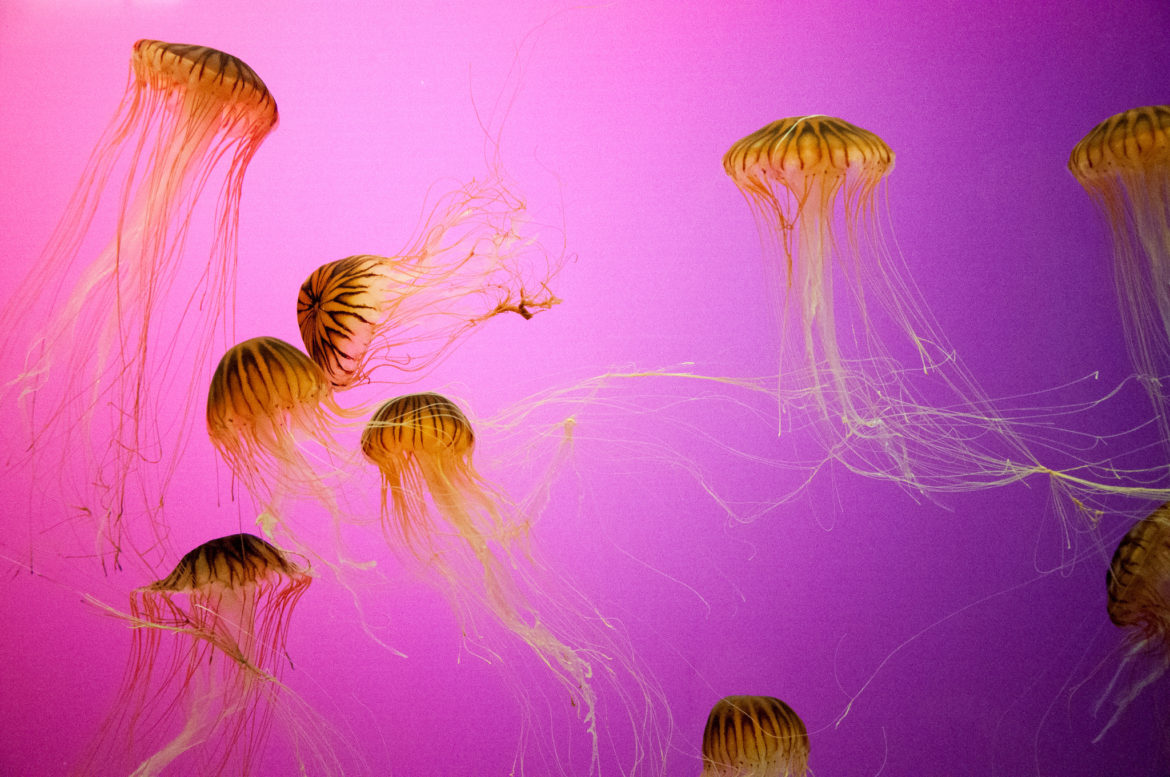 Jellyfish float in a display at Chicago's Shedd Aquarium in April 2013.

Microgrids have struggled to compete with cheap power in the region, but a fledgling movement is finding a foothold.

The Shedd Aquarium in Chicago’s glitzy downtown loop is home to thousands of creatures, from shrimp to beluga whales, each dependent on a habitat that precisely mimics their natural environment.

It takes a constant power source to keep the lighting and temperatures just so for the more than 100 environments, and for that, the aquarium counts on a microgrid.

“The diversity of life and the environment requires a pretty reliable, resilient power system to ensure the safety,” said Drew Gravitt, a sales manager with Schneider Electric, an energy management and automation system company that manages the aquarium’s power system.

The aquarium’s power system, which can operate as an energy island in the event of a grid power outage, is an example of a fledgling movement in the Midwest to invest in microgrids as a form of insurance for reliability and resiliency.

Microgrids have not found fast traction in the region, mostly because the cost of power is low and distributed resources have not been developed as aggressively here. But that is changing as schools, large companies, and other institutions invest in behind-the-meter microgrids, especially here in Illinois.

“Illinois is the bright spot in the Midwest,” said Peter Asmus, a principal research analyst with Navigant Research.

Navigant Research tracks the growth of microgrids internationally and publishes a microgrid tracker every two quarters.

Here is a snapshot of Navigant’s numbers for the Midwest:

“In terms of capacity, Illinois, Michigan, and Minnesota are the only three Midwestern states that are in the top 25 of U.S. states,” said Johnathon de Villier, a Navigant research analyst.

The number one barrier facing microgrids — especially utility-scale microgrids — in the region is the low cost of power.

“The Midwest is a real barren wasteland for microgrids,” David Chiesa, senior director global business development at S&C Electric, an electric power systems company based in Chicago. “If you look at the cost of power in the area — 8 or 9 cents per kilowatt hour is your residential average. If you are a large power user, they don’t even charge you as much as that.”

As a result, Chiesa said S&C is regularly pushed out of the microgrid sales in the Midwest.  S&C Electric only works with large-scale commercial and industrial users, and S&C doesn’t make low-voltage devices.

“I’ve gone down the road with several customers,” Chiesa said. “When they go to talk to the utility, the utility goes, ‘well, we don’t want to lose you as a customer, you know, we are charging you 6 cents a kilowatt hour right now, if we went down to 5.5 cents, would you forget this whole microgrid idea?’”

But Chiesa and Asmus agree that things are changing with the growth of distributed resources and utilities looking at non-wired alternatives. “That’s where the worm will turn,” Chiesa said.

In North America, most microgrids are in California, where there are high retail rates, and along the East Coast, where state programs for resiliency in the wake of storms have prompted development.

Asmus credits Illinois policy — like the state’s grid modernization law passed in 2011 — for spurring innovation, and the largest utilities, ComEd and Ameren, for being out front in discussing the potential of utility scale microgrids. “They’ve been talking about microgrids for quite some time.”

While utility-scale microgrids — like Ameren’s $5 million facility at the utility’s Technology Application Center in Champaign, Illinois — receive a lot of attention, most microgrids are actually built in the private sector. “The vast majority of microgrids are not utility microgrids,” Asmus said. “They serve college campuses, and more recently communities.”

“The segment that used to be lagging that is really picking up is the commercial and industrial,” he said. “The Midwest has a pretty healthy portion of its market based on that.”

Shedd Aquarium’s microgrid includes a 265-kilowatt solar system on its roof and a 1 megawatt battery storage system. The aquarium has set a goal to reduce its energy consumption by 50 percent by the year 2020.

It’s not just about keeping the lights on and the penguins comfortable, Gravitt notes. As a nonprofit aquarium that depends on visitors to help pay for operations, it’s also about keeping revenue flowing.

“There are 2 million people that go through there every year,” he said. “After power reliability are safety concerns, but their revenue relies on it being open.”