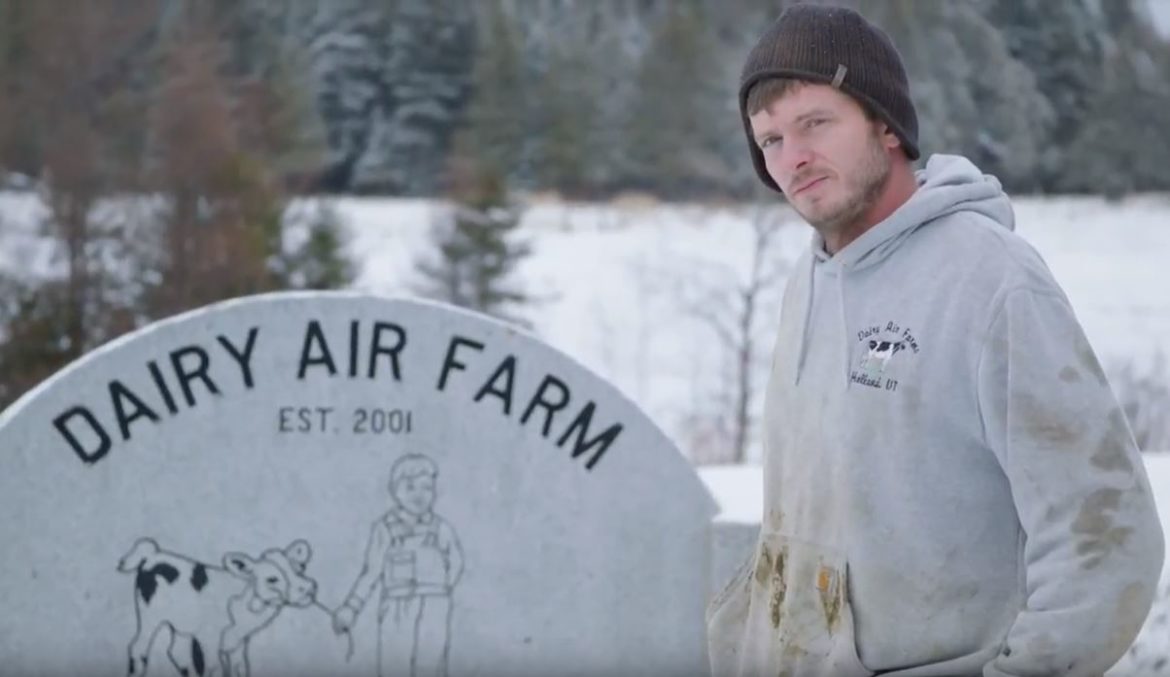 Brian Champney is seeking to install a 2.2 megawatt wind turbine on his dairy farm in northeast Vermont.

The Dairy Air Wind project is a 2.2 megawatt turbine that would be installed on a farm in the state’s far northeast corner.

Correction: The average land requirement for solar ranges from about 7.6 to 13 acres per megawatt, according to a 2013 National Renewable Energy Laboratory study. An earlier version of this story overstated the footprint.

Correction: The Vermont Public Utilities Commission adopted strict new noise standards for wind turbines in 2017, but it was instructed to do so by the state legislature, which passed a bill signed by former Gov. Peter Shumlin in 2016. A previous version of this story omitted the legislation.

A dramatic political shift against wind energy in Vermont threatens to derail the last remaining wind project under development in the state.

The Dairy Air Wind project, a single 2.2 megawatt turbine to be installed at a dairy farm in the state’s far northeast corner, won a state contract in July 2016 to supply renewable power to the New England power grid.

Since then, the landscape for wind development has shifted significantly, with a pro-wind governor retiring and being replaced by a candidate who partly ran on a campaign against large wind turbines.

Today, the project is caught in a quagmire of regulatory and procedural delays with a deadline to start generating power within three years of its contract looming in July 2019.

“They’re trying to run the clock out on us and I have a big problem with that,” said Brian Champney, who owns the 250-head Dairy Air Farm along with his wife Kim.

Since 2001, the Champneys have acquired three properties to create a 500-acre farm in Holland, in the Northeast Kingdom, a region of Vermont along the Canadian border. Their plan is to secure extra income with a wind project on the property.

“I was always fascinated by wind turbines and I said if I ever had a farm I’d want to put them on it,” said Champney, 40.

The turbine would be surrounded by flat cornfields, with the Champneys farmhouse the only residence near. Wind advocates fear that if a project of that type can’t get built, then no other wind turbines will be erected in the state for several years.

Champney has been frustrated by delays at the state Public Utility Commission and opposition from neighboring landowners. Hearings that were supposed to start in the spring have yet to be scheduled. And in May, the PUC added a second step to its review to separately deal with transmission congestion in the region before it considers the overall merits of the project.

“Agriculture is a very tough business and it’s not getting any easier,” he said, referring to low wholesale milk prices. “My wife and I are both native Vermonters. People who are against the project complain about the aesthetics. But if the state shuts me down, I may have to sell the development rights.

“I don’t want to do that, but the way the dairy industry is … this is a way to diversify the farm to make it a little more viable, and for my three sons to stay here.”

Solar power, which has surged in Vermont this decade under its net metering law, is not an option for Champney, he said. While the turbine footprint and access road would take up about 2 acres of his farm, equivalent energy production from a solar array could require 10 times that amount of land or more, a non-starter, he said.

Wind power has not always had a hostile reception in Vermont.

“It is interesting and also disturbing that Vermont has had this arc of success in developing wind and then having it come circling back to the difficulty it is having now, especially when you realize that America’s first large-scale grid connected wind turbine was installed here at Grandpa’s Knob, near Castleton,” said Olivia Campbell Andersen, executive director of Renewable Energy Vermont.

“I was always proud that Vermont was a leader in wind,” said David Blittersdorf, founder of AllEarth Renewables, which is developing Dairy Air Wind. “Now it’s really sad that we’ve gone from the first state with wind and now we’re ready to abandon wind when it’s one of the lowest-cost renewables.”

Blittersdorf grew up with the wind industry in the state and in some ways is responsible for its growth.

“I remember as a 12-year old in 1969 visiting the Grandpa’s Knob site and getting really excited,” he said. After earning his engineering degree, he co-founded NRG Systems in 1982, which was a pioneer in wind resource assessment equipment, which became a supplier to the global industry.

The wind industry took off in California at that time and eventually made its way to the Northeast, particularly Vermont, in the 1990s and afterward. According to the American Wind Energy Association, Vermont has 149 megawatts of wind power, accounting for 13.4 percent of in-state generation in the state. Vermont also has a clean energy goal of achieving 90 percent of its electricity from clean resources by 2050, a goal that wind advocates say cannot be met by eliminating that energy source.

In the late 1990s, Blittersdorf helped draft the state’s first Standard Offer law, which is the policy initiative that made Dairy Air possible. The state’s Standard Offer program, which has been revised in recent years, is a feed-in tariff for competitively selected renewable energy projects. Only one of 17 applications from 2015 – Dairy Air – was selected in the following year. It formally applied for its permit in December 2016.

But at the same time Dairy Air started moving through this process, three-term Democratic Gov.Peter Shumlin, a wind energy supporter, was stepping down. Vermont’s governors are elected to two-year terms and Republican Phil Scott, who won in 2016, partly ran on an anti-wind platform.

Scott said the potential visual impacts on tourism were not acceptable. He also advocated closer cooperation with Hydro Quebec, the provisional Canadian utility that already supplies a substantial amount of energy to the state.

Gov. Shumlin signed a bill in 2016 calling on state regulators to draft tougher noise standards for wind turbines. After a series of public hearings, the Vermont PUC, with a new chairman appointed by Gov. Scott, proposed the rules in early 2017. They are among the strictest sound standards in the country: 42 decibels in the daytime and 39 decibels at night, measured 100 feet from residences nearest to the turbines.

“Since these new rules were proposed we haven’t seen any projects come forward,” Andersen said. “We feel that the Public Utility Commission and the governor’s opposition has set out a marker, so that effectively discourages development.”

Dairy Air also has to contend with a regulatory hurdle that its advocates call unprecedented. The PUC in May issued a “bifurcation order” that split the farm’s application into two tracks.

The Vermont Department of Public Service maintains that transmission constraints that would be exacerbated by the addition of the Dairy Air Wind turbine require a separate proceeding before aesthetics or public safety objections are considered.

Likewise, the local distribution utility Vermont Electric Cooperative, says its system cannot absorb more distributed renewable energy due to an excess of clean energy generation. It says required payments made under existing contracts will cause financial harm to its members if Dairy Air is built.

The PUC ruled that transmission issues posed by the project in the northeast corner of Vermont have statewide implications and need to be addressed in separate hearings. Dairy Air agreed that the transmission issues could be addressed, but that splitting them from its original application would create a “procedural quagmire” that would add to the complexities of the case. The wind project advocates also pointed to the looming deadline of the Standard Offer contract.

Wind opponents contended that if the transmission constraint question could not be adequately resolved, time and money would be saved by eliminating review of siting and other contested “localized” issues. The Commission agreed.

“This is a defining moment for our state, to see which direction we are going to go,” Blittersdorf said. “I am not giving up. Vermont has been progressive on so many issues, I would hate to see it go backwards on this one.”

If Dairy Air loses, he raised the possibility of a lawsuit against the state.

“I figure I’ve got another 15 years in this business, and one thing we’ve seen, is governors change,” Blittersdorf said.