Minnesota utility regulators are expected to decide Thursday whether to offer a bonus payment to new residential community solar subscribers.

The residential “adder” would offer individual subscribers an extra 2.5 cents per kilowatt hour in the first year before decreasing and phasing out over the next two years.

For all of Minnesota’s success with community solar, homeowners and renters have largely been left out as developers have focused on larger customers. Only about 10 percent of the state’s 435 megawatts of community solar capacity is subscribed to by residential customers. The rest has been claimed by businesses, governments and nonprofits.

Solar companies say residential subscribers will continue to be a lower priority and could become uneconomical unless the adder incentive is approved.

Without it, “the rest of the gardens we build will be commercial” in Minnesota, said Melina Fleming, vice president of marketing and operations for SunShare, a Denver-based solar developer which will open two projects in the next few months filled entirely by residential subscribers. “It will be difficult because the economics will be so dramatically different.”

SunShare counts more than 3,500 residential customers in Minnesota, almost half of all residential subscribers in the program. If the state’s few resident-focused community garden developers decide their business model cannot survive the new payment scheme, based on the value of solar, Minnesota residents may see options for buying solar power dwindle.

Minnesota passed community solar legislation in 2013 and began accepting applications in 2014. Developers quickly submitted proposals for more than 400 megawatts within the first few days of the program’s start.

Devised by the Legislature and managed by Xcel Energy, community solar projects require a minimum of just five subscribers, with none taking more than 40 percent of the power. The legislation also has geographic constraints, with subscribers required to be in Xcel Energy’s service territory and located in the same or adjacent county as the project.

Even early supporters were surprised by the commercial interest. Solar policy expert John Farrell, who assisted in crafting the legislation, said the original idea was to allow more homeowners and renters a chance to access solar energy.

“It may have been shortsighted on our part, but we didn’t realize businesses had the same interest in solar (as residential customers) and had similar limitations,” said Farrell, director of the Institute for Local Self-Reliance’s Energy Democracy Initiative. “But it has been a good thing that the commercial sector has as much interest in solar as individuals do.” 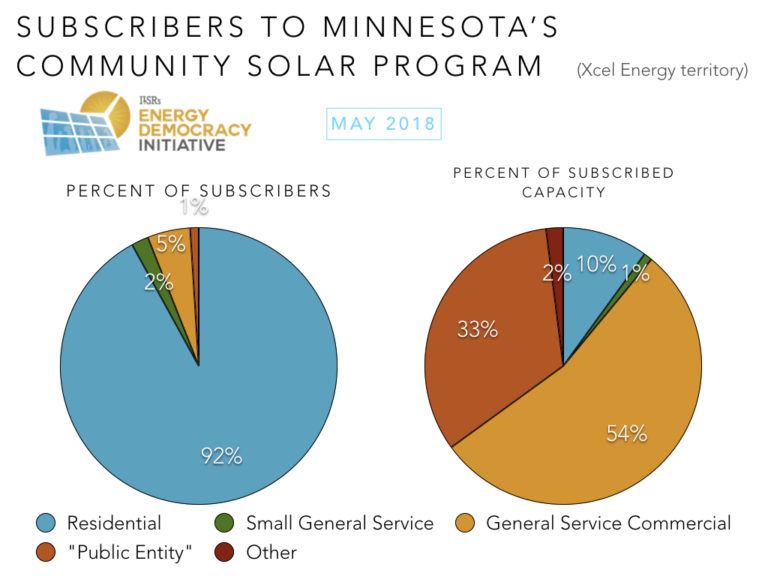 The natural inclination of any developer has been to attract two subscribers to fill 80 percent of the garden and then to find three or more to absorb the rest. Trying to attract dozens of small subscribers takes a lot more work than signing up organizations capable of buying larger blocks, Farrell said.

The handful of developers focused on the residential market agree with Farrell’s observation. They say landing one residential subscriber can take as much effort as recruiting one large one. Signing up residential customers requires direct mail, television, radio, web and social media marketing and even door-to-door campaigning, Fleming said.

SunShare’s founder David Amster-Olszewski was among the pioneering developers of solar gardens in Colorado, the first state to have them prior to Minnesota. His passion was for the gardens to reflect the idea of “community,” which meant residential customers.

“He saw residential as a differentiator of us, and we were groundbreaking in that way, but it was difficult,” Fleming said. Like many developers, SunShare has sold its community solar gardens and now manages and markets subscriptions on behalf of their new owners.

Signing up residents “is not as big a challenge as financing the gardens,” he said. “But it does take a lot of work, it’s very time intensive because we use a person-to-person process.”

Although the company does not have a residential-only garden, typically individuals represent at least three-quarters of the capacity of its seven projects. “Residents are our priority,” he said.

A newcomer to the Minnesota market, Washington, D.C.-based CleanChoice Energy, manages the marketing and sales of subscriptions to eight gardens owned by North Carolina-based Cypress Creek Renewables. The company recently announced it was marketing a 4-megawatt project in suburban Minneapolis that should have room for at least 600 subscribers.

In Minnesota it has found a significant appetite for solar among residential customers through aggressive marketing and a simple digital signup process, said Kate Colarulli, vice president of retention marketing and public relations.

The five-year-old company’s digital platform is designed to allow clients to sign up for clean energy programs in less than five minutes. A  $2.5 million U.S. Department of Energy grant was used to help create the digital registration platform, she said, which has been used by some weeks by dozens of clients looking to subscribe to Minnesota solar gardens.

In SunShare’s projects, for example, residential customers get bill credits of more than 15 cents kWh. Other developers with a high number of residential subscribers offer a similar payback.

A few years ago, clean energy advocates endorsed a new value of solar tariff methodology, and Minnesota is the first state in the country adopt it. The pricing incorporates external factors such as avoided transmission investments, the health and environmental effects of clean energy and the positive impact solar can have on the electric grid.

The problem for developers is value of solar is expected to decrease the bill credit residential subscribers receive to around 10 cents kWh. The PUC has been studying an option, called an “adder,” would provide a 2.5 cent kWh bonus for residential subscriptions under value-of-solar for one year. The payment would fall to 1.5 cents kWh the following year, and 0.5 cents kWh in the third year, before ending.

Xcel and the Department of Commerce say the bonus is either expensive or premature since no value of solar garden has even begun operation. Developers such as DenHerder-Thomas, SunShare, Minnesota Solar Energy Industries Association, religious and clean advocacy groups (among them Fresh Energy, publisher of the Energy News Network) support the adder, as well as the concept of a carve-out for residential subscriptions as potentially part of any solution.

At least one community solar developer serving commercial concerns pointed to a need for an adder for his company to begin marketing to consumers. Ralph Jacobson, founder and CEO of IPS Solar, said his company developed 75 MW of community solar gardens subscribed by commercial customers such as schools, governments and businesses. He’s spoken recently to his sales staff about considering a “pivot” toward the residential subscriptions, but only if regulators approve the bonus.

Farrell is also a fan of the adder, though he believes Minnesota has an advantage in how the community solar program is structured. Unlike some states, such as Colorado, Minnesota does not limit the number or total capacity of solar gardens.

“No one is losing out, it’s not like there would have been more residential subscribers if those commercial customers hadn’t signed up,” he said. “That would have been a problem only if we had artificially limited the program… It’s not a question of setting aside capacity, it’s a question of whether the compensation rules are fair and sufficient for everybody.”