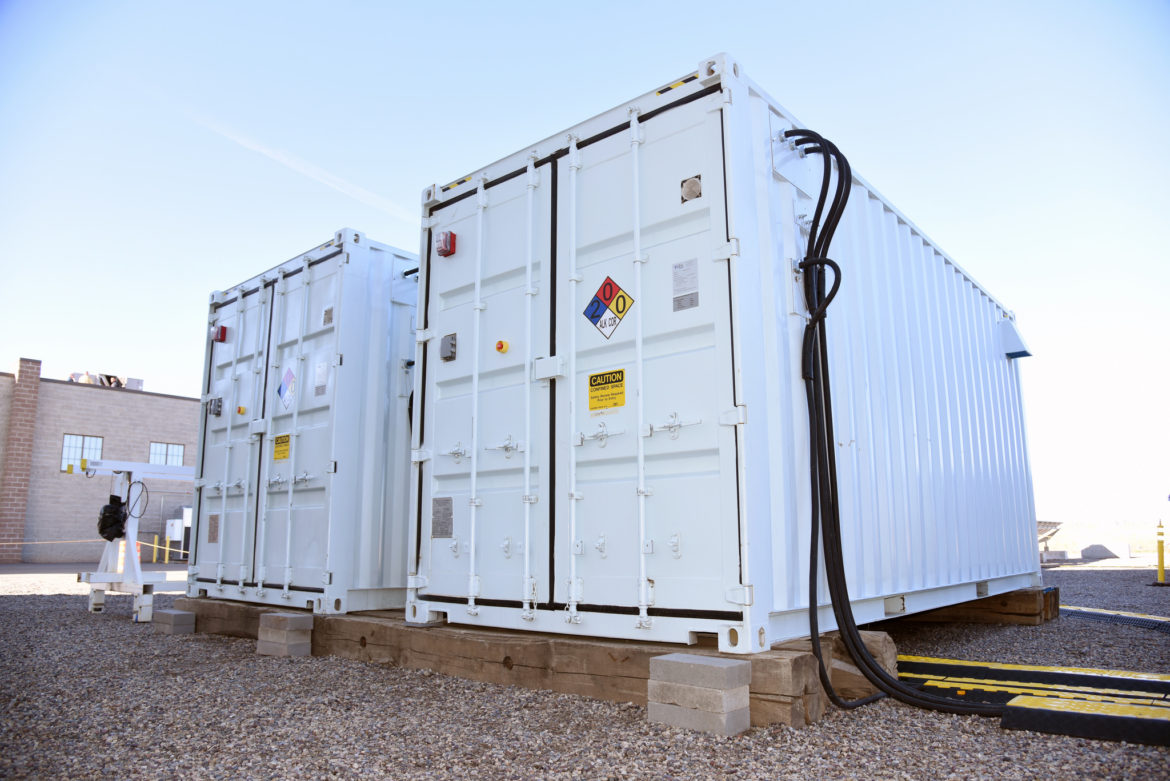 A flow battery at an Idaho National Laboratory test microgrid in September 2016.

A salesman with Schneider Electric says the benefits of microgrids are getting easier to see for certain customers.

Don Wingate was touring a Wisconsin nature center with a group of electrical inspectors when a thunderstorm knocked out power to thousands of customers in the area.

“Six thousand people lost power, but the nature center did not. Not a blink in the power,” Wingate said.

What kept the lights on? A microgrid that Wingate’s company helped install at the Gordon Bubolz Nature Preserve allowed it to power itself in island mode with a mix of five different types of distributed generation.

Wingate says it was another example of why he thinks microgrids are a good idea. Part of his job at Schneider Electric, where he’s the vice president of sales focusing on grid solutions, is to convince his clients, too.

These days, despite some headwinds, Wingate says the sales pitch is getting easier, especially in Illinois – a bright-spot for the microgrid market in the Midwest. “People aren’t building microgrids just for sustainability,” Wingate said. “They are not doing it just for resilience or reliability, and they are not doing it just for economic benefit. It’s a combination of all three of those things that link together.”

Want to learn more about the new microgrid that uses renewable energy to power our buildings? The Immersion Center will…

Wingate made the case in an interview with the Energy News Network. The following conversation has been lightly edited for clarity and length.

Q: How do you see the market for behind-the-meter microgrids in the Midwest right now, and how do you see it changing?

My view is it is growing. Power is cheap in the Midwest, but with the advent of less expensive solar, less expensive storage and more repeatable systems, people are starting to accelerate projects.

Q: Is the market for behind-the-meter microgrids stronger than for utility-scale microgrids in the Midwest?

I think it definitely is. In Illinois, they’re really trying to incentivize — in 2016 they had the Future Energy Jobs Act — that his helping to provide more microgrid pilots. In Ohio, with PowerForward, that is going to provide a framework to incent utilities to explore microgrids. It’s making it easier for interconnections to occur. You can’t stop technology. You can’t legislate technology, you can’t slow it down. It is going to happen and be deployed where it’s needed. And businesses are saying that they’re not waiting for the utility to say: here’s your microgrid.

There is a gap between what the public utilities commission charters say — you know, to provide for everyone — when a utility wants to put in a microgrid. The utility says: I want to make it a capital investment for one customer. The commission says what? You want spend 10 million dollars for the customer x, y, z when you’re supposed to make the grid more resilient? I think the public-private partnerships that are starting to develop will help fund infrastructure investments. Whether be at college campuses, process industries, or big manufacturing plants — larger users of energy are going to take control over their spending. They’re going to become active prosumers and they’re going to integrate with the grid in general. But the dynamic is starting to change.

Q: I wouldn’t call it robust, but the commercial and industrial sector for microgrids is getting stronger in the Midwest.

Q: More than a few years ago?

Oh my gosh, yes. The economic factors are very important. The costs of storage are going down, the costs of solar are almost a commodity, now. The balance of plant is becoming more repeatable. Once you do a couple of microgrids and say here’s how I can optimize it — it’s becoming more cost effective.

Q: Are you working on non-wired alternatives? What’s the potential for microgrids?

We don’t currently have a contract that I could point to. But I have had several conversations with utilities on non-wired alternatives. We have one in the Midwest where there’s poor service to a growing area and the decision was: let’s put in a new transmission line. And the community doesn’t want that. They’re saying I don’t want the towers in my backyard. I’m concerned about the cost. They said, we want to be more sustainable. We’re talking to the utility about it. I’m saying: here’s a great example of putting in a non-wired alternative. Let’s save you the cost of putting in a new transmission line and fighting with the community. Rather let’s work with the community, work with the utility, work with the technology to provide a non-wired alternative and everybody can win.