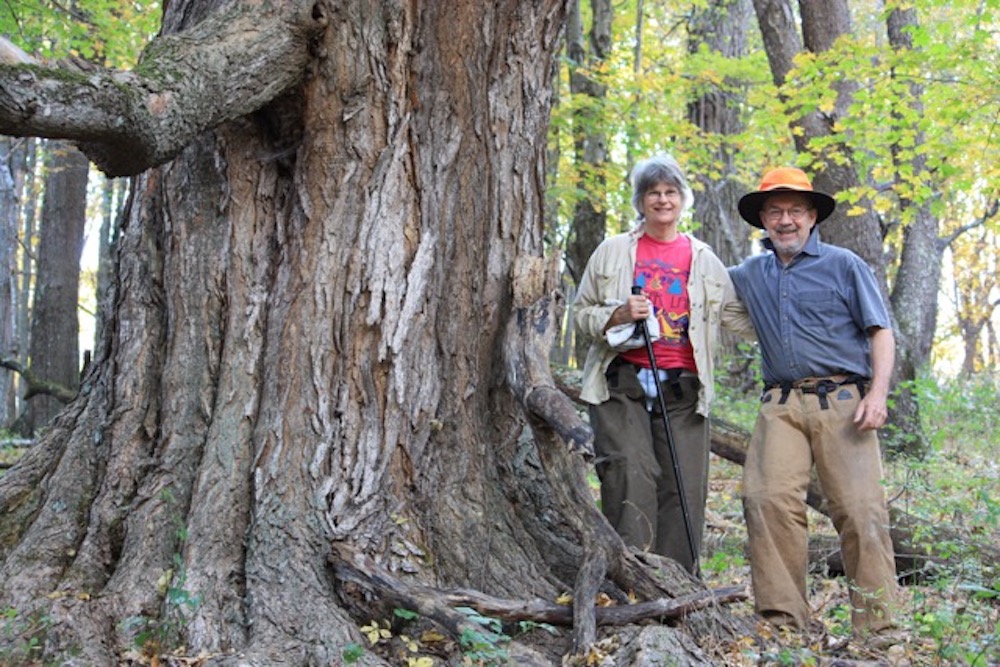 Lynn and Bill Limpert stand next to a centuries-old tree on their Appalachian Mountain property, which is slated to be crossed by the Atlantic Coast Pipeline.

When Lynn and Bill Limpert bought 120 pristine acres in Virginia’s Appalachian Mountains in 2009, the only construction project they expected to handle was building their retirement home.

That changed Feb. 12, 2016, when the couple opened a letter from Dominion Energy asking to purchase a right-of-way for its Atlantic Coast Pipeline.

The pipeline would bisect Virginia for roughly 300 of its 600 miles to move hydraulically fractured natural gas from West Virginia to eastern North Carolina. It is one of the pipelines that has became a target for opponents dedicated to keeping fossil fuels in the ground.

Most pipeline construction is delayed in Virginia, but in full swing in North Carolina and West Virginia. Dominion and other investors plan to open the partially completed pipeline next year and say the cost could reach $6.5 billion.

This summer, the Limperts’ land in rural Bath County, west of Charlottesville on the West Virginia border, was the site of an encampment for activists practicing grassroots pipeline resistance. It was coordinated by the nonprofit Chesapeake Climate Action Network.

Several hundred Virginia students, conservationists, social justice activists made the pilgrimage, of sorts, to walk under ancient trees and learn how the pipeline will alter the fragile landscape.

The activists’ months-long effort will culminate Friday with an interfaith ceremony on that same property that includes songs, blessings and prayers.

The Limperts have dedicated their retirement years to educating the public about pipelines. Bill, 71, worked as a regulator for the Maryland Department of Environment and Lynn, 63, as a graphic artist.

Bill talked with the Energy News Network about their journey.

Q: The Friday event is officially called the “Ona Commemoration Celebration.” Why?

Ona is our name for a giant sugar maple on Miracle Ridge. She is close to 300 years old and at least 15 feet around. Ona is at the edge of the construction corridor so we would lose her for sure if the pipeline remains in its current location.

Lynn and I get our spiritual sustenance from the natural world. Long before we had an inkling of a pipeline coming through our property, we named Miracle Ride and Cathedral Hollow. They reflect the feeling we get walking under these ancient trees, one similar to being among the redwoods.

We’re really appreciative that so many spiritual leaders are coming out here. It’s an outpouring of love and grace for us in what have been a few dark years.

Q: Can you briefly describe your land?

We’re on a very steep series of ridges and hollows. Our house is at 3,000 feet elevation and our property goes up to 3,600 feet. Three to four acres are in meadow, but most is an old growth forest of sugar maples and numerous types of oaks and hickories.

Q: The pipeline requires a 125-foot construction corridor. How would that affect your property?

Miracle Ridge would be left with a pile of rock rubble 125 feet wide and 3,000 feet long—all visible from our front porch. And, we would lose about 300 large trees that are older than this country.

Construction would require decapitating almost three-quarters of a mile of ridgetop on Little Mountain, which is visible from our property. They are blowing smoke when they say they will restore that contour.

Also, steep slopes would require an even wider corridor, according to filings with the Federal Energy Regulatory Commission.

No. The original route went through two national forests, George Washington and Monongahela, where there were concerns with the endangered cow knob salamander and the Cheat Mountain salamander. It couldn’t get permits.

We didn’t get much sleep the night we got the letter from Dominion in February and it’s been difficult to get a good night’s sleep ever since.

I had heard about the pipeline in 2014 and was opposed to it. But when we found out when it was aimed right at us, we jumped back into the fight full steam ahead.

Q: On average, the 42-inch diameter pipeline would be buried 10 feet deep. What are your concerns with your land’s steep slopes and limestone terrain?

I worry about landslides exposing the pipeline and leading to an explosion. We’ve had several landslides within several hundred feet of the pipeline route. One of the largest, about a half-mile away was 500 feet long, 30 feet wide and seven feet deep.

In a karst terrain, fragile limestone channels run underground and there’s rapid interaction between groundwater and streams and other surface water. Construction blasting could collapse those channels.

Any pollution from construction, such as diesel fuel, lubricants or sediment runoff could knock out the well we rely on for drinking water.

The plans I’ve seen for this project are the worst I’ve ever seen for a large construction site. They’re shockingly bad, and I have looked at hundreds of sediment and erosion control plans in my professional career.

(Editor’s Note: The pipeline project still lacks a state water quality permit in Virginia, which is contingent on the approval of erosion, sediment and stormwater control plans. Also, Virginia’s State Water Control Board has approved a permit request from the Army Corps of Engineers that allows federal regulatory oversight of stream crossings. That is being challenged in court.)

Q: If you don’t agree to sell the right-of-way to Dominion, can the company deploy eminent domain?

We’re not going to sign an easement agreement and we’ve been offered two of them. We feel like this is theft of our property by a corporation. Day by day, we’re waiting to see if we get eminent domain papers. It’s like approaching the guillotine here.

Q: For multiple complex reasons, Dominion rejected your idea of co-locating the pipeline with a nearby power cut. Have you talked with Dominion representatives?

Matt Strickler, the state Secretary of Natural Resources, arranged for Dominion representatives to visit our property on June 7. We walked the pipeline route and they told us they didn’t anticipate any problems building there and that it was too late to change the route.

I followed up with Strickler and Dominion, but never heard back. Our hope of them moving the route away from us is dimming.

Q: Now that Virginia is on the cusp of advancing solar and wind via the Legislature’s recent Grid Modernization and Transmission Act and Gov. Ralph Northam’s new Energy Plan, where does natural gas fit in?

Bring on the renewables on and stop the fossil fuels, it’s as simple as that. The cost of natural gas pipelines is going up and the cost of renewables is dropping, so it’s a no-brainer to transition, especially when the demand for energy is flattening.

Q: The abundance of hydraulically fractured natural gas opened the door to exports. Isn’t a sign of progress for the United States to export energy?

We have a glut of energy. Some people are going to make a profit getting that gas out of the ground, but it’s a loss for everyone else because we’re all going to suffer the negative impacts of climate change. It’s a train coming and we’re pretty much in the tunnel and can’t get out of the way.

Q: You still own your home near Camp David in Maryland’s Catoctin Mountains. Why not move back there permanently and let this go?

It is our civic duty to stand up and fight for this land. We are not going to relent, regardless of the outcome.

Natural gas is heralded as a solution to climate change because its carbon emissions are about half that of coal, but what often gets lost in that conversation is how much more potent a gas methane is compared to carbon dioxide.

All of that trapped heat is leading to more flooding, higher temperatures, bigger hurricanes, agricultural failures and acidification of the ocean.

Maybe we can escape climate change, maybe not, but it’s mankind’s biggest challenge and it makes all other pollution issues pale in comparison.

Q: This has been a serious ordeal. Has there been any heartening news?

During the summer encampment, we were encouraged that so many people are like-minded about preserving our natural world.

After seeing the government at all levels let us down, we had a boost when scientists from the state Department of Conservation and Recreation visited Miracle Ridge last year and told us we had one of the finest oak and hickory forests they had ever seen. We thought maybe we had something at that point that could help to stop the pipeline.