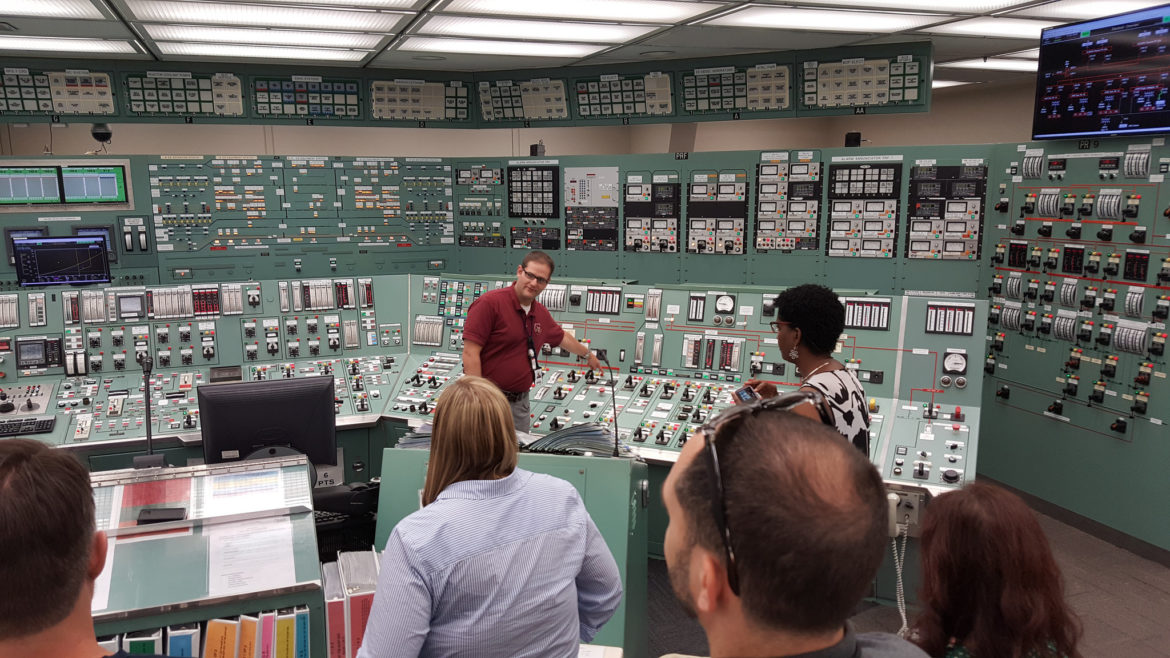 An NRC inspector gives a tour of a control room simulator at the Three Mile Island nuclear plant in Pennsylvania.

As other states move to rescue their uneconomic nuclear power plants, Pennsylvania is still weighing whether to take action.

Fueled by concerns over climate change, grid reliability, and job retention, states including Illinois and New York have recently given billions of dollars to support nuclear energy by essentially broadening their definitions of clean power. In May, New Jersey approved $300 million annually to help support its nuclear fleet. A similar push is underway to persuade Ohio lawmakers to rescue two facilities there.

Two of Pennsylvania’s five nuclear generation facilities face early closure — Exelon’s Three Mile Island plant outside Harrisburg and FirstEnergy Solutions Beaver Valley plant near Pittsburgh. At the moment, there appears to be little urgency at the state level to keep them open, although a report expected to be released next month will lay out possible options.

Like the coal industry, nuclear plants around the U.S. have struggled amid slowing demand for electricity and competition from natural gas and renewable energy, such as wind and solar. Now federal help appears less likely. Politico reported this week that a nearly year-long effort by Energy Secretary Rick Perry to aide ailing coal and nuclear plants has been shelved by the White House.

Three Mile Island’s Unit 2 reactor was mothballed after it partially melted down in 1979 during the nation’s worst nuclear accident, which stalled the industry’s development in the U.S.

Exelon, which owns its still-operational Unit 1 reactor, has been trying to make the case to state lawmakers that the facility needs help to stay open to protect jobs and prevent carbon emissions. It employs about 675 people and has been unprofitable for the past six years, according to the company.

In 2017, Pennsylvania legislators formed a bipartisan Nuclear Energy Caucus to start discussing the issue. They’ve held nine hearings and are preparing to issue a 60-page report next month, enumerating potential options the state could pursue. So far, they have not moved any legislation.

Jake Smeltz is chief of staff to state Sen. Ryan Aument, the Republican chair of the caucus. Smeltz says the group has been focused on how to reconcile the state’s long-term energy goals with the wholesale power market and federal rules.

“I hope we can be forward-thinking and it can be about more than just the bottom line today.” said Smeltz. “It’s the worst of all public policy issues — it’s timely, irreversible, multi-jurisdictional and it comes at a cost. The caucus wanted to walk through all that very thoughtfully.”

‘It’s the worst of all public policy issues — it’s timely, irreversible, multi-jurisdictional and it comes at a cost’

After Pennsylvania deregulated its electric power market more than 20 years ago, Smeltz said, “we really turned the keys to the car over to [the regional grid operator] PJM and the federal government. So we are in that car, but are we headed in the right direction?”

He said the caucus’ forthcoming report will not have recommendations. Instead, it will list options for Pennsylvania, including doing nothing. But he expects that if there is a push for legislation, something would have to happen before June — the annual state budget deadline, when legislators hash out many major issues.

“If there is progress that indicated there would be actual passage of legislation, we’d try to see if there was an expedited way to order fuel and keep the plant operating,” said Fein. “We’ve been clear with the legislators. We’re going to do everything we can do to push for some action, to allow for a reversal of our plans.”

Supporters of states’ nuclear bailouts argue the current system does not value the broader environmental benefits the plants bring to the table — including fuel security, reliability and carbon-free emissions. They say the market design is too simplistic — designed solely around how to deliver the cheapest megawatt-hour of electricity in the short term.

A dire report this month from the United Nations Intergovernmental Panel on Climate Change has added new urgency to nuclear supporters’ calls to keep plants online. Its authors warned of a world in crisis within decades, without sharp reductions in greenhouse gas emissions. In September, the MIT Energy Initiative issued a report that said nuclear power should remain a meaningful part of the mix of energy resources, if the world is to seriously address the threats posed by the warming climate.

That’s not been a priority for everyone in Pennsylvania’s Republican-controlled legislature, but Fein says he does think it appeals to Gov. Tom Wolf, a Democrat.

“Obviously there are certain people who that resonates more with than others,” he said. “I think Gov. Wolf is very concerned. Concerns about climate seem to be increasing, not decreasing.”

‘A winnowing of the nuclear herd’

Although the nuclear industry has significantly ramped up its lobbying efforts at the state capitol recently, its opponents include some heavy hitters, like the state’s booming natural gas industry, the AARP, and manufacturers, who argue subsides would be unfair and lead to higher energy bills for consumers.

“It’s not the end of nuclear power. It’s a winnowing of the herd. Three Mile Island is an uneconomic reactor, and it should be allowed to shut down and go to pasture.”

He said over the years, the nuclear power industry has continually moved the goal posts.

“They’re always going to cry the sky is falling. We’re used to this,” said Epstein. “We’re told without nuclear, we’d dependent on foreign oil. We were told nuclear power is green. We should be focused on cleaning up the site.”