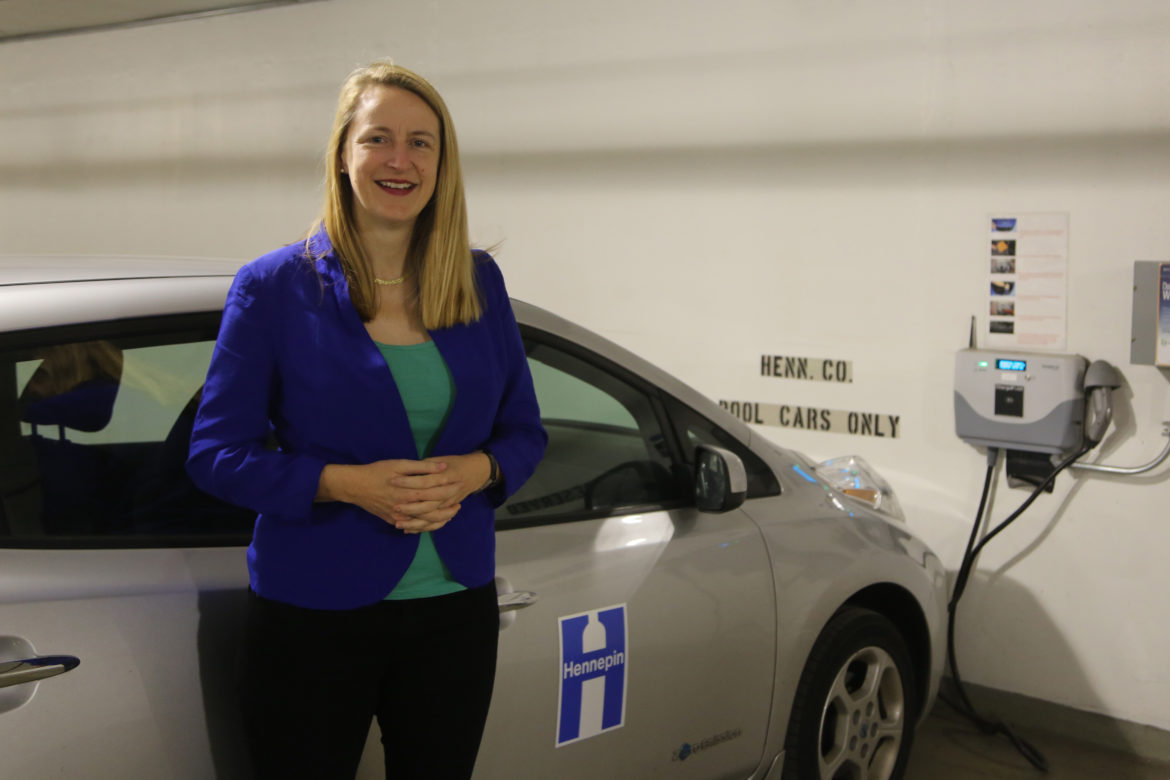 A report says Hennepin County can cut emissions and save money by transitioning to a electric cars.

Minnesota’s most populous county could reduce emissions and save money by downsizing and electrifying its light-duty vehicle fleet, according to a recent report.

Hennepin County, home to Minneapolis and several inner-ring suburbs, owns a fleet of 144 light-duty vehicles, from sedans to squad cars. The county hired the University of Minnesota’s Institute on the Environment last year to look at costs and strategies for replacing those cars and trucks with electric vehicles.

The first part of the study is complete and looked at how the county uses its fleet, as well as potential costs, operational impacts and partnership opportunities. The second part, due next year, will offer strategies and challenges for implementing electric vehicles.

The good news for the county is it probably has more vehicles than it actually needs, which means an all-electric fleet could be smaller than its existing one, the report concluded. The average Hennepin County vehicle is driven less than 6,000 miles annually, which is fewer than most local government fleets, including the city of Minneapolis.

“Hennepin County doesn’t put as many miles as other regional or national fleets,” said Jeff Standish, manager of Corporate Sustainability at the Institute on the Environment.

Since the county pays more per mile to operate its underutilized fleet, buying fewer vehicles will save money and create more efficiencies, he said. By going from 28 gas-fueled sedans to 14 electric cars, as proposed in his report, Standish said the county could save $314,000 over a “business as usual” approach.

“By both downsizing and replacing electric vehicles you are going to be, in the long run, saving money,” Standish said.

The report couple electric vehicles with car-sharing or ride-hailing partnerships with services such as HourCar, Lyft, or Uber. And since part of the county’s mission is to reduce emissions, Standish said officials should consider whether potential partners offer electric vehicles.

Hennepin County has a goal of reducing carbon emissions 80 percent from its 2005 level by 2050. Transportation is the largest source of greenhouse gases in Minnesota, and several local governments are looking to electric vehicles as a way to reduce emissions and lower fuel and maintenance costs.

“I think what’s happening is great,” said Noa Shavit-Lonstein, organizing lead for the Coalition for Clean Transportation, a new organization advocating for zero emission vehicles, including in government and private industry fleets. “Our local governments can start leading the way and using their purchasing power to lead to a clean transportation future.”

Fresh Energy, which publishes the Energy News Network, is a founding member of the Coalition for Clean Transportation.

While decisions are on hold until the second part of the report is complete, replacing aging sedans with electric vehicles could start in the next few years, Baldwin said. For trucks and other heavier duty vehicles, the transition might take longer because few or no all-electric options exist yet.

Ford, for example, will offer police vehicle hybrids in 2020 and Tesla has been testing a heavy-duty semi. He dismisses compressed natural gas vehicles as uneconomical and believes electric vehicles will be offered in all vehicle classes, even tandems, which have four back wheels.

The county plans to reduce gas and diesel use in the meantime while transitioning to an electric fleet. Greater enforcement of a rule against allowing county trucks to idle begins Nov. 1, Baldwin said. Plans to add telematic and GPS positioning that creates the most efficient routes and information on speed, idling, distance, driving habits and other engine data. “We’ll have much better data on driving with this technology,” he said.

Both Baldwin and County Commissioner Marion Greene, who requested the study, say the major challenges are building out a charging infrastructure and getting employees to accept EVs. At some point the only option will be electric, so staff will have to accept them, Baldwin said.

“We’re already taking baby steps in this direction,” Greene said. Currently the county has two chargers and will be looking at the potential for adding more of them through money Minnesota receives for the Volkswagen settlement, she added.

Greene said the public has to realize the county will be saving money and cut emissions with a smaller, electric fleet. As EVs grow in the consumer market the wisdom of the county’s investment will look become more apparent, she said.

Change may happen fast. “The first step is building a charging infrastructure,” she said. “We have two forces at work to content with, the retirement of our current fleet and our recognition that we probably need fewer cars…the whole process will take five to 10 years.”