Photo By
UK Dept. of Energy and Climate Change 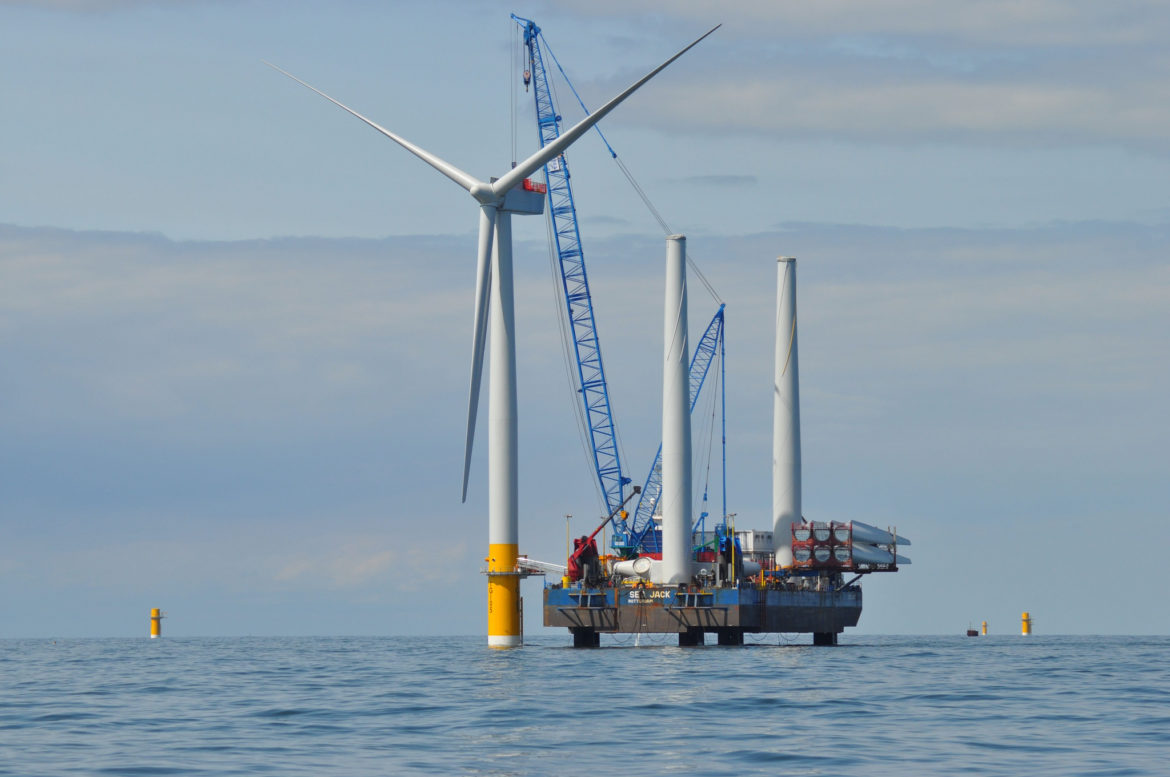 Construction of an offshore wind turbine in England.

The retired Navy SEAL is aiming to construct the premier safety training facility for workers charged with installing and maintaining turbines destined for the East Coast — and beyond.

As early as next year, he’s hoping to break ground on 25 acres near Virginia Beach, a region with the potential to be the jobs, training and manufacturing wheelhouse of Virginia’s nascent offshore wind industry. The training niche he wants to fill is just one piece of the larger puzzle of how to build out the state’s wind workforce.

“We want to be the company that is the go-to globally for offshore energy safety training,” he says about the $20 million to $30 million enterprise he and a business partner have been fine-tuning for about four years.

The centerpiece of what they have named BEI Maritime will be an indoor, L-shaped pool with enough water to fill two Olympic-size swimming pools. . Model wind towers equipped with blades and generating components, boats, cranes and catwalks are among the equipment that will allow workers to gain expertise moving from a small boat to a tower, escaping from a flipped supply vessel, practicing high-angle rescues and tool transfers, and rehearsing how to lower injured workers from high above.

Trainees will also be able to learn how to evacuate from a submerged helicopter. A separate outside facility will be designed to teach them firefighting skills.

“It’s Hollywood in a box,” he says about the pool’s waves, water currents, rain, wind, light, fog, sound and other simulated atmospheric effects. “It’s a systems engineering challenge, but we’ll have the whole nine yards. We’ll be able to provide everything from a sunny day with flat seas to a night with four-foot waves.”

Chierepko has traveled to Europe with businessman Jeff Keever, the former chairman of the Virginia Offshore Wind Coalition, to study safety training in that continent’s booming offshore wind industry. There, training is done outdoors without atmospheric effects.

“Scott is a hard charger and he’s going into this with his eyes wide open,” Keever says. “He’s on track. Having access to his first-class facility will help to put Virginia on the map as a leader with this type of initiative.”

Beyond the 30 megawatt Block Island Wind Farm roughly four miles off the coast of Rhode Island, the United States has so little experience with offshore wind that a specific safety training regimen hasn’t yet been established, Keever says.

Therefore, he says, it’s sensible that Chierepko is designing his program to evolve with the industry and its ensuing regulations.

In Norfolk, Old Dominion University (ODU) professor George Hagerman has promoted possibilities for offshore wind for more than a decade.

To him, Chierepko’s initiative is an innovative start to growing an offshore wind supply chain. He is intent on linking graduate students enrolled in ODU’s upcoming offshore wind courses with parts of that safety training.

“The ocean is unpredictable and they should be prepared  for the unexpected,” says Hagerman, senior project scientist with ODU’s Center for Coastal Physical Oceanography. “We want them to be safe.”

Ideally, he says, students will learn valuable lessons from Dominion Energy’s long-delayed offshore wind test project, now expected to come online in 2020. The energy giant has partnered with a Danish company, Orsted Energy, to build two 6 MW wind turbines 27 miles off the coast of Virginia Beach on 2,135-acres leased by the state.

In addition, beginning next fall, ODU students will be able to earn a professional certificate in offshore wind site assessment planning by taking classes in coastal meteorology, oceanography, continental shelf geology and mid-Atlantic environmental issues. Graduates would be eligible for jobs with the private companies that design site assessment plans and the state and federal agencies that review them.

“Eventually we will need welders and other shipyard trades, but right now the jobs are in planning,” Hagerman says. “We have a real-world, locally relevant example to use throughout our certificate coursework.”

The example he’s referring to is Dominion’s lease of 112,800 federal acres offshore Virginia from the U.S. Interior Department’s Bureau of Ocean Energy Management. It’s one of two site assessment plans approved thus far by federal regulators. Four others have been submitted.

“Planning accounts for only a slice of the offshore wind jobs, but why can’t we give Virginians an edge?”

Eventually, ODU will offer a second certificate in construction and operation planning.

“This is not how to design a turbine blade, it’s the next step in planning,” Hagerman says. “Like site planning, these are jobs for white-collar workers. It’s everything that has to be done before steel goes in the water.”

Building a wind economy is complicated

Ross Tyler, a co-founder of the Business Network for Offshore Wind, says ODU’s focus on planning instead of the design, installation and maintenance of actual turbines is sensible “because you don’t want to create a program and interest in it, and then there isn’t a place to employ those who come out if it.”

The network, which has also collaborated with other East Coast states, focuses on beefing up the U.S. supply chain. Tyler and others are now working in tandem with the Sierra Club and the state Department of Mines, Minerals and Energy to tout wind’s benefits to Virginia’s economy.

Studies have confirmed that the Norfolk region could be a prime offshore wind industry hub because of its open shipping channels, navigational flexibility, port infrastructure and existing maritime workforce.

That transformation will require community colleges, universities, defense contractors, businesses, government agencies and others to synchronize training for varying skill sets with market growth and demand at the local, regional and national level, Tyler says.

“There’s no one easy answer,” he emphasizes. “You don’t have a single light bulb go off and say, ‘Oh yes, this is how it starts.’ It requires a long-term vision.”

Diverse customer base is key

Wind advocates say Dominion’s Coastal Virginia Offshore Wind demonstration project could be the gateway to big wind in the Southeast, just as Block Island has opened up the Northeast.

A new state law spells out that it is in the public interest for utilities to install 5,000 MW of wind and solar by 2028. The Sierra Club and others are calling for at least 2,000 of those MW to be in offshore wind.

“To play a really significant role in the national arena of offshore wind, Virginia has to start somewhere,” Tyler says. “Focusing on those two turbines is a start. But there needs to be a push for that 2,000 megawatts because it will take time to get that approved.”

Keever, active in Virginia’s wind community for a decade, fears that aggressive plans by coastal states to the north will overshadow Virginia’s promise.

“The reality of it is so-so and iffy,” he says. “The movers and shakers are up there in the Northeast. Here, we peaked too early and lost a lot of momentum.”

But that doesn’t faze Chierepko, a Massachusetts native who has spent much of his career in Virginia since joining the Navy in 1988. He’s building BEI Maritime in phases to serve a broad spectrum of clients.

“Let’s face it, offshore wind is not here yet, not like it is in Europe,” he says. “But we’re not putting the cart before the horse. We are growing our facility almost at the same pace that offshore wind is growing in the United States.”

As wind ramps up, Chierepko says he can sustain the business with revenue streams from training programs for the Department of Defense and other government agencies, merchant mariners and the oil and gas industry.

“We are confident in our plan because of our diverse customer base,” he says.

From SEAL to entrepreneur

After retiring in 2011, Chierepko took his Navy SEAL know-how to a company that was exploring how to test submersible vehicles in giant cement tanks for the Department of Defense.

That idea never came to fruition there, but he continued to pursue it, perfect it and attract investors as he formed Brotherhood Enterprises International (BEI) in 2015 as a defense contracting business in Virginia Beach.

After discovering that the few training facilities in the United States had outdated equipment, his research led him to a safety training pool in Nova Scotia that Survival Systems Training Limited built about four years ago. He has drawn on that facility as a model and the Canadians have offered guidance and support.

Chierepko slimmed down his initial plan for four pools when investors balked at the $40 million-$50 million price tag because of the specialized nature of his business. He says he is confident his investors, who he didn’t want to name, will fund the single-pool concept.

As of now, he says, he has selected a contractor, lined up architects and builders, and the land deal is “95 percent completed.”

Longtime boosters are hopeful that Chierepko’s initiative combined with classes at Old Dominion University and Dominion’s demonstration project are signs that offshore wind is on the rise in Virginia.

Businesses and offshore wind enthusiasts have had their expectations deflated once or twice because of its herky-jerky history, Tyler says.

“We want to bring those groups back to the table and restore their faith,” he concludes. “Some of those businesses have been bruised and they need some healing.”