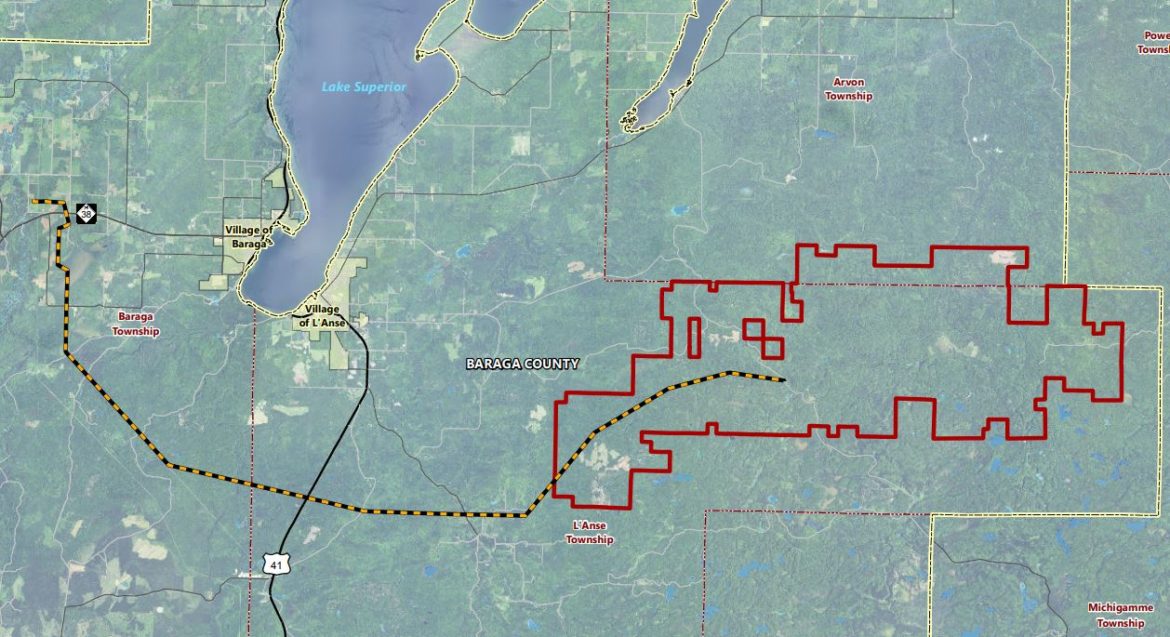 The proposed location of the Summit Lake wind project in Michigan's Upper Peninsula.

While wind energy is seeing pushback in other parts of Michigan, a project in the Upper Peninsula — largely benefiting a single landowner — could prove even more challenging.

Supporters say the 130 megawatt project near Lake Superior could bring badly needed tax revenue to the rural area, while opponents — including the Keweenaw Bay Indian Community — say it threatens the local wilderness.

The Summit Lake Wind Project being developed by global developer Renewable Energy Systems is unique for Michigan. It would be sited on forested property owned mostly by one property owner: Weyerhaeuser Co., one of the world’s largest private owner of timberlands.

Most wind development in Michigan is sited on agricultural land with lease payments spread among dozens of landowners.

Researchers say these two distinctions are unique for wind energy in Michigan and likely will impact local attitudes toward the project.

“If you have contiguous land, it makes it much more straightforward for the developer,” said Sarah Mills, senior project manager for the University of Michigan’s Center for Local, State, and Urban Policy. “But instead of payments going to maybe 100 landowners, it’s only going to one. It just changes the narrative a little bit. I’m not saying that landowner isn’t worthy of receiving that money, but it’s a more difficult case to make than a whole bunch of people benefiting.”

In addition to Weyerhaeuser, RES is working on leases with two other landowners with commercial forest property, a company spokesperson said.

“One is this is largely undeveloped, pristine U.P. wilderness that is really part of the region’s sense of place. There’s a lot of good habitat here,” he said. “Another is this is commercial timberland — a resource that in modern history has always been utilized and harvested to support the timber and paper industry.”

Additionally, the project is located on state Commercial Forest Land in L’Anse Township and territory ceded by the Keweenaw Bay Indian Community. Though private property, the public can access the land for hunting and fishing. The KBIC Tribal Council earlier this year signaled its opposition the project.

‘Instead of payments going to maybe 100 landowners, it’s only going to one. It just changes the narrative a little bit.

“We have no better hunting, fishing and gathering than on this chunk of land,” said Jeffery Loman, a KBIC member and member of Friends of the Huron Mountains, which opposes the project. He says the proposed site is unlike any other wind project in Michigan.

“Among the opposition, everyone understands that the industrialization of those forest lands are the beginning of the end of economic possibilities associated with tourism,” he said. “It’s an anomaly, for sure. The U.P. wouldn’t be the first place I’d look” for wind energy.

The 130 MW project calls for 49 turbines spread over thousands of acres near the McCormick Wilderness area of the Ottawa National Forest. The project includes plans for a 25-mile distribution line to connect with the area transmission grid.

Road improvements would also be made to allow for big trucks, “which is not necessarily seen as a good thing,” Neumann said. “It would improve access to what a lot of locals see as real remote wilderness that should be kept that way.”

RES spokesperson Alicia Rivera said the site was chosen for the area’s wind availability, “available capacity on the existing electrical grid, its distance from residences, and for its compatible use of timberland.”

The company is completing wetland surveys and preparing an application to the township for a special land use permit. It hopes to start construction in summer 2019 and complete the project by the end of 2020.

Rivera said the land in and around the project would remain accessible under Commercial Forest Land status and “any historical tribal rights, as it is today.” Improving roads as the project progresses will allow “better use by residents and tourists,” Rivera added.

She said the company has had “ongoing conversations” with the community and tribal members since September 2017.

“We have received input from various stakeholders and continue to evaluate those in concert with other project requirements, such as compliance with federal, state, and local requirements,” Rivera said.

Weyerhaeuser owns and manages more than 560,000 acres of timberlands in Michigan to support the state’s logging industry.

“Identifying new revenue streams on our timberlands helps to ensure it remains a working forest,” said spokesperson Chris Fife, referring to wind energy leases. “One of the reasons we favor wind projects is that they are very compatible with our land with limited impact on our operations, and recreation.”

‘Identifying new revenue streams on our timberlands helps to ensure it remains a working forest.’

He added that the “small footprint” of the project represents less than half of 1 percent of the company’s property in Baraga County.

Meanwhile, critics have maintained formal opposition to the project. In August, Friends of the Huron Mountains filed an injunction challenging meteorological towers that were installed. In late October, members of the group began collecting signatures for a referendum on local ordinance changes that would allow the project. The plan is to hold a vote in May 2019 to abandon the zoning changes.

L’Anse Township Supervisor Peter Magaraggia said there has been confusion among local officials over zoning rules and special land use permits needed for the project. He declined to give his personal opinion on the project, but supports the referendum.

“Let the people decide. This is a huge issue,” he said.

Baraga County officials approved a resolution to support the project based in part on the opportunity for new tax revenue. However, Magaraggia says there are lingering questions about wildlife impacts, eventually decommissioning the turbines and whether the project could co-exist with the forestry industry.

“There are people fighting this like crazy both ways,” he said.

Mills, of the University of Michigan, has traveled the state researching local attitudes toward wind energy development, including a contentious project in the U.P.’s Garden Peninsula, which has faced multiple legal challenges from nearby landowners.

The perception of wind energy in the U.P. is nuanced and not roundly opposed, Mills said. The region has a history of using land resources through mining and foresting, but there is also a “decent amount of conflict” over conservation and impacts on wildlife.

“Do we value land for its scenic value or productive value?” Mills said. “This could be an opportunity for economic development in places with not a lot of options, but also people with a real connection to the landscape makes wind a tough sell.”

“The issue is place identity,” Neumann said. “In siting wind in a more wild environment, that place identity is threatened to a greater extent to many community members. We’re not talking about NIMBYism here — it’s something more significant than ‘Not In My Back Yard.’”

Siting wind and large-scale solar projects will be an ongoing issue in Michigan, clean energy advocates say. Utilities like Consumers Energy are calling for a large-scale buildout of solar in the coming decades, which comes as communities in eastern Michigan are increasingly skeptical of wind development.

“Wind development in Michigan is a hard sell right now,” Mills said. “Just based on community reaction in Michigan generally, I think solar might be more likely.”

Margrethe Kearney, staff attorney for the Environmental Law and Policy Center, spoke at a conference in Grand Rapids in October about siting challenges.

“We have to focus on the next issue (for clean energy), which is where it’s going to be sited,” Kearney said. “We have been protesting against dirty fossil fuel plants that have local impacts. Now we have to go out and explain why this is a substitute that benefits local communities. On a basic level, we need to start working through this problem together.”