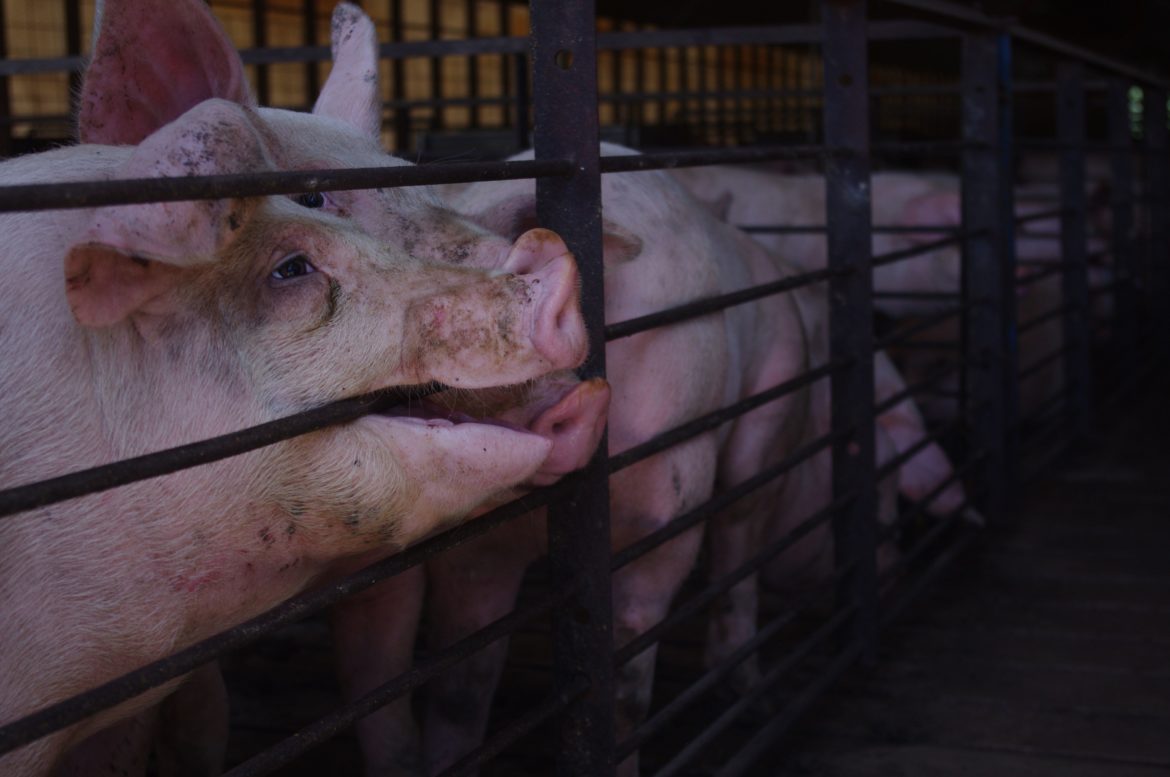 Hogs at Butler Farms, one of a handful in North Carolina producing biogas.

When Smithfield Foods announced a plan last week to cover and capture gas from thousands of its hog manure pits, most news reports linked it to mounting lawsuits from neighbors fed up with odor and other nuisances caused by the company’s factory-scale farms.

Yet Smithfield, the world’s largest pork producer, says its massive biogas venture in North Carolina, Missouri and Utah is driven not by growing legal pressure, but by a commitment to reduce its climate footprint and create a new stream of revenue.

“We’re really focused on reducing our greenhouse gas emissions [and] providing financial return back to our business and our contract growers,” said Kraig Westerbeek, senior director of Smithfield’s renewables arm. “That’s really our main focus in doing this.”

Indeed, the company’s announcement has done little to quiet critics who point out hog operations cause problems beyond global warming pollution, and who worry the plan will foreclose the complete overhaul in swine waste treatment they believe is necessary.

But most observers agree the company’s 10-year strategy will  deliver on its intended climate goals, causing the largest change in waste management since the modern American pork business was born and an immense kickstart to the nation’s biogas industry.

“It’s a big step forward. It’s important from a methane perspective, which is a really potent near-term greenhouse gas,” said Maggie Monast with the advocacy group Environmental Defense Fund, who worked with Smithfield to develop the plan. But, she acknowledged, “it’s not a total solution, and there’s still work to be done.”

A years-long path to an industry turning point

Smithfield Foods is based in Virginia and owned by a Chinese entity, but it has extended ties to North Carolina. The company opened the world’s largest hog slaughterhouse in Bladen County in 1992 and acquired Duplin County’s Murphy Family Farms in 2000, then the nation’s largest pork producer.

Today, Smithfield controls roughly 90 percent of North Carolina’s hog farms, the vast majority through contract farming. The company supplies food and pays farmers to nurse its animals through different phases of their lives. Each contractor raises thousands or even tens of thousands of swine at a time, shuttered in long barns.

Nearly all of the state’s 2,100 hog farms store manure in open, earthen lagoons, then periodically spray their liquid onto nearly crop fields for fertilizer. This “lagoon and spray field” approach was banned two decades ago for new farms, but existing operations, concentrated in the state’s southeastern corner, are still a flashpoint.

Neighbors allege the stench and airborne pathogens are tormenting and sickening them. Scientists have linked hog waste to pollution in nearby waterways. Hurricanes and heavy rains can cause waste pits to flood, break, or overflow. Decomposing pits of manure release methane, contributing to global warming.

Under the contract farming system, the farmer or “grower” is responsible for solving these problems. But few have had the extra capital on hand or willingness to act on their own, and politicians have been hesitant to make them.

Smithfield is an easier target. Over 500 neighbors have filed over two dozen nuisance suits naming Smithfield, not its contract farmers, as the defendant. Three juries this year have sided with the plaintiffs, ordering the company to pay hundreds of millions in damages. More suits are in the offing, including a trial scheduled this month.

Smithfield has aggressively defended itself in court and in public statements. But even before the litigation began, said Westerbeek, the company had begun researching what happens to be a partial solution.

“We started doing manure-to-energy, renewable energy projects years ago,” Westerbeek said, “and really trying to understand and get to the point we are today.”

The concept of biogas dates back centuries, but advocates of the technology say it’s a perfect match for modern, factory-scale farming. Covering pits and capturing gas reduces some odor and creates another income source for farmers, who can sell it as fuel to create electricity. Along the way, the resource displaces fossil fuels and curbs emissions of a potent greenhouse gas.

North Carolina is home to 11 operating manure-to-energy projects, most of which burn gas onsite to create electricity. The outlier, which produces renewable natural gas, is the model on which Smithfield’s pledge rests.

Launched in March, Optima KV in Kenansville draws on waste from five Smithfield-contracted farms, which collect gas in lined, covered pits, called anaerobic digesters. Four and half miles of underground pipes send the gas to a central cleaning station on land owned by Smithfield, where it is purified and then injected into an existing distribution pipeline.

“They’ve been very supportive,” Mark Maloney, co-founder of Optima Bio, the company who built both projects, said of Smithfield. “We have a great relationship with them.”

Producing renewable natural gas can pose fewer logistical hurdles than burning gas onsite. Because it can be used in power plants or converted to liquid fuel, it also offers more opportunities for economic payback. But the technology requires a huge upfront outlay for facilities to transport, clean and inject the gas.

“The infrastructure for these projects is pretty expensive,” said Westerbeek, “so even larger farms sometimes struggle with the economics if they do it by themselves.”

Smithfield’s plan is designed to help farmers overcome those economics hurdles, while also creating more earnings for the company.

Its focus is on “finishing farms,” which raise hogs in their final weeks before slaughter and create the most manure. The company predicts size, location and density will preclude about 10 percent of them from capturing gas, leaving roughly 945 farms in North Carolina producing renewable natural gas within 10 years.

Smithfield will invest in digesters and the infrastructure needed to clean and deliver the gas to a pipeline for the farms it owns. For those it doesn’t, the company will invest in piping and cleaning facilities, and offer to buy unpurified gas from its contract farmers.

“We feel like there’s an opportunity for grower, the farmer, to invest in the digester, and get a good rate of return on that digester, and be part of the project,” said Westerbeek. “That would be our first choice.”

If farmers can’t or won’t invest in their own digesters, Smithfield is prepared to build them itself in order to meet its pledge, he said. “The intent is to create an economic model that’s in the best interest of the farmer,” Westerbeek said.

In all cases, Smithfield plans to sell the purified gas at a premium, thanks to the national carbon offset market combined with either the federal renewable fuel standard or a state requirement for swine-waste-to-energy.

The most significant impact of Smithfield’s plan will be less climate-warming pollution. The company has promised to cut greenhouse gases 25 percent by 2025, and methane from manure is its largest source of emissions.

Smithfield will market the gas nationwide, but it will almost certainly sell enough in North Carolina to allow utilities to exceed their mandate to get .2 percent of their electricity from swine gas, part of a larger clean energy law designed to reduce fossil fuel use.

Other environmental improvements are less certain. Covering lagoons or building new enclosed digesters reduces some odor, and farmers who’ve installed the systems say they get many fewer complaints from neighbors. But barns and spray fields will keep smelling.

Anaerobic digesters reduce the volume of the waste overall, and covered pits are much less likely to burst or overflow. But liquid potentially richer in nitrogen will continue to be sprayed onto nearby crop fields.

“Those are areas where we’re going continue to try to measure the impacts of this big transition in the system,” said Monast, “and push Smithfield to make continued improvements.”

“Digesters are a very big down payment on a more comprehensive waste management solution,” Vujic said. “I’m looking at this very ‘glass half full.’”

Critics of the Smithfield plan aren’t so sure. With the industry under pressure from nuisance suits, they say now is the time for the company to deliver a full loaf, not just a quarter.

“It’s time to take a look at this whole question. It’s not just methane,” said Derb Carter, director of North Carolina offices for the Southern Environmental Law Center. “We’re raising our hand and saying that’s just one problem that needs to be addressed. What about all the rest?”

Carter allows that Smithfield is making a huge investment. But that heightens his worry that the company will lock in a reliance on what he sees as inherently flawed lagoon-and-spray field technology.

“We’re investing further, deeper, into fundamentally that same system,” Carter said, “and on top of that potentially creating a revenue stream, without looking at the bigger picture to determine if can we do better.”

Smithfield faces skeptics beyond the state’s environmental community. The utilities commission must approve all new injection points into the pipeline infrastructure. Over the objection of the state’s pork council, in October it reaffirmed a three-year pilot program to study the technology, putting on hold most new renewable natural gas projects.

Smithfield was aware of the challenge posed by the pilot when it rolled out its pledge, Westerbeek said, but, “clearly we would hope to overcome it.”

As for improvements to the company’s waste management strategy beyond capturing methane, he was more circumspect.

“We’ve always taken a public stance that we would embrace technology that would move the curve or push us ahead on environmental performance,” he said, “but is also economically feasible.”