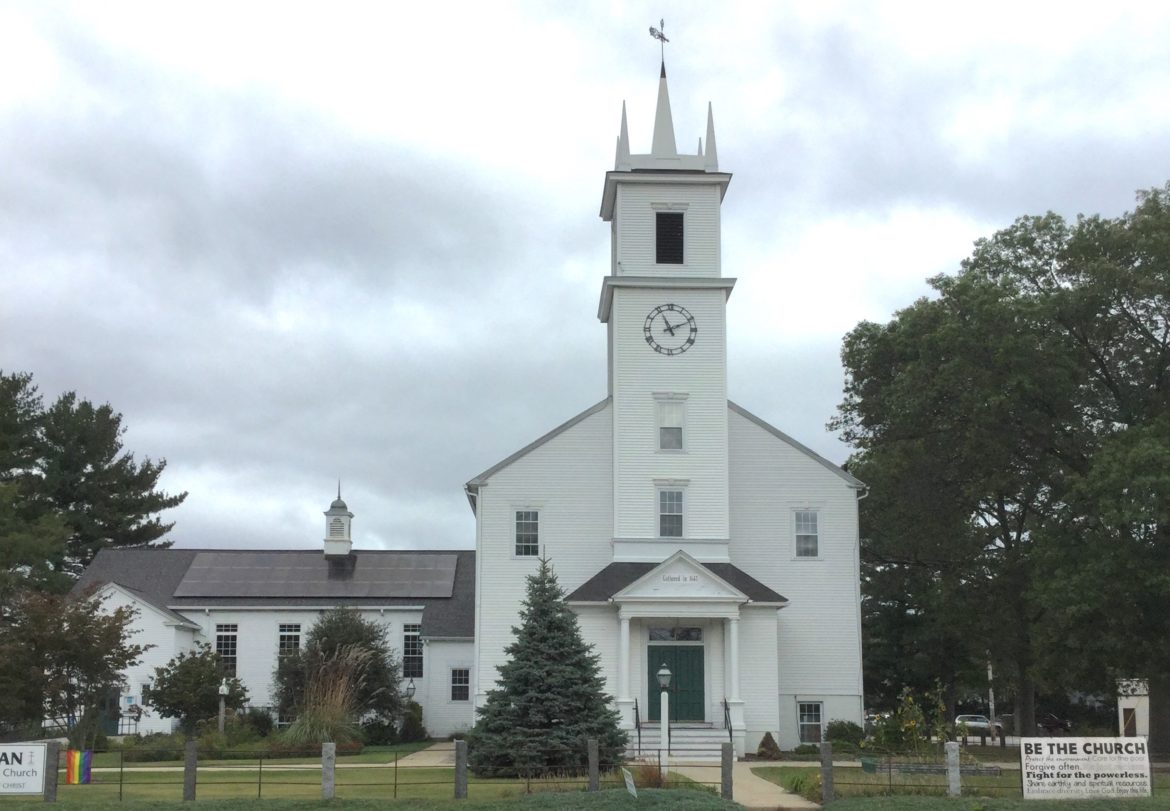 The Newman Congregational Church in East Providence, Rhode Island, installed an array of solar panels on its rooftop in 2016.

For a growing number of houses of worship, investing in renewable energy is a focus of “creation care.”

The two-century-old Newman Congregational Church looks like a piece of history, standing on a grassy lawn in the Rumford neighborhood of East Providence. The white, wood-framed structure has a modern accent, though: an array of solar panels on its rooftop.

Newman is one of Rhode Island’s first faith communities to embrace solar power and is part of a growing national trend. Across the United States, houses of worship are adding solar panels to their rooftops as a way to lower energy costs and make a statement about stewardship.

It’s one of the most tangible and visible ways religious institutions like Newman practice what they call “creation care,” a spiritual effort to mitigate environmental destruction.

“In the beginning of the Book of Genesis, it’s written that God created the sun and the moon as luminaries in the sky to bring light to the earth,” said Rabbi Yonatan Neril, founder and executive director of the nonprofit Interfaith Center for Sustainable Development. Solar panels literally harness that light.

The Newman Congregational Church took its first steps toward energy efficiency in 2007 with weatherization, insulation, and lighting inspections. With help from its utility, National Grid, Newman made improvements in each of those areas and passed along the knowledge to its members. At the time, solar panels were too expensive.

A few years later, the church devised a plan to finance solar with the help of the state’s chapter of Interfaith Power & Light (IPL), a faith-based clean energy advocacy organization. Newman raised half of the funds from members of its congregation, with individual donations ranging from $25 to $5,000. The second half came from the church’s internal funds.

“We wanted this to be something the whole congregation could be involved in,” said Ray Frackelton, head of the church’s green team initiative.

‘The bottom line is we have a strong moral obligation regardless of our faith to take care of creation and live sustainably.’

Getting approval for the installation was initially a challenge. The church is a historic building, so any changes needed an OK from the city’s historic district board. Frackelton went before the board to make the case, and the panels were eventually installed in 2016.

The panels have a 10 MW capacity per year and save the church more than $3,000 per year on its electricity bill, Frackelton said.

At least 430 other religious institutions nationwide have installed solar panels or participated in community solar, according to Kari Chinn, the national IPL’s community engagement and programs manager. It’s an estimate because it’s based on self-reporting; IPL is trying to gather more comprehensive data on the trend.

Christine Muller, a religious educator and former board member of the Rhode Island chapter of the IPL, said renewable energy is gaining traction in the state. RI-IPL has partnered with groups like Smart Power and Solarize Rhode Island to translate education into practical outcomes. For example, RI-IPL was able to link houses of worship with people who could advise them on solar energy or conduct energy audits.

For Newman, and other churches, the primary motivation behind the decision isn’t financial. “The bottom line is we have a strong moral obligation regardless of our faith to take care of creation and live sustainably,” Frackelton said. Installing panels is the church’s way of chipping away at the state’s carbon footprint, no matter how small the contribution may be.

And they’re able to see how they’re making a difference every day. The church linked the solar panel’s activity to its website, so leaders and parishioners can monitor cost savings, energy use, and environmental benefits in real time. So far, the panels have saved more than 35,000 pounds of carbon dioxide from being emitted.

Going solar has also been an effective way to spread the gospel of environmental stewardship in the wider community. According to Frackelton, a half-dozen families followed the church’s lead and put panels on their own homes. Neighborhood residents took other energy-saving measures, too. Some had energy audits; others replaced light bulbs in their homes. One parishioner still shows Frackelton her electric bill every month with a smile on her face.

“Faith leaders are respected by their congregations,” Muller said. “If the faith leaders say or do something, they will notice it and think more about it and take it more seriously than if they see it on TV.”

Still, switching to solar is not without its challenges. Some congregations may not have the financial means, like Newman at first. And since churches are nonprofits, they can’t take advantage of the same tax breaks individuals and commercial businesses are offered in most states.

Many faith leaders also don’t have the information they need to make the decision. Without education, Muller said there is a paralysis of will within the faith community. Some don’t grasp the urgency of the situation; climate change is still so abstract, and more concrete priorities, like running a food pantry, take precedence over going solar.

“People don’t see the reality of the world we live in,” she said. “You can be a person of faith, but if you’re not informed about climate change, then even your best intentions will not save the planet.”

At Newman Congregational Church, renewable energy has become a priority. For Frackelton and others, creation care — in the form of solar energy — is a critical part of their everyday reality. “We want to ensure the best possible future for our children, grandchildren, and subsequent generations.”