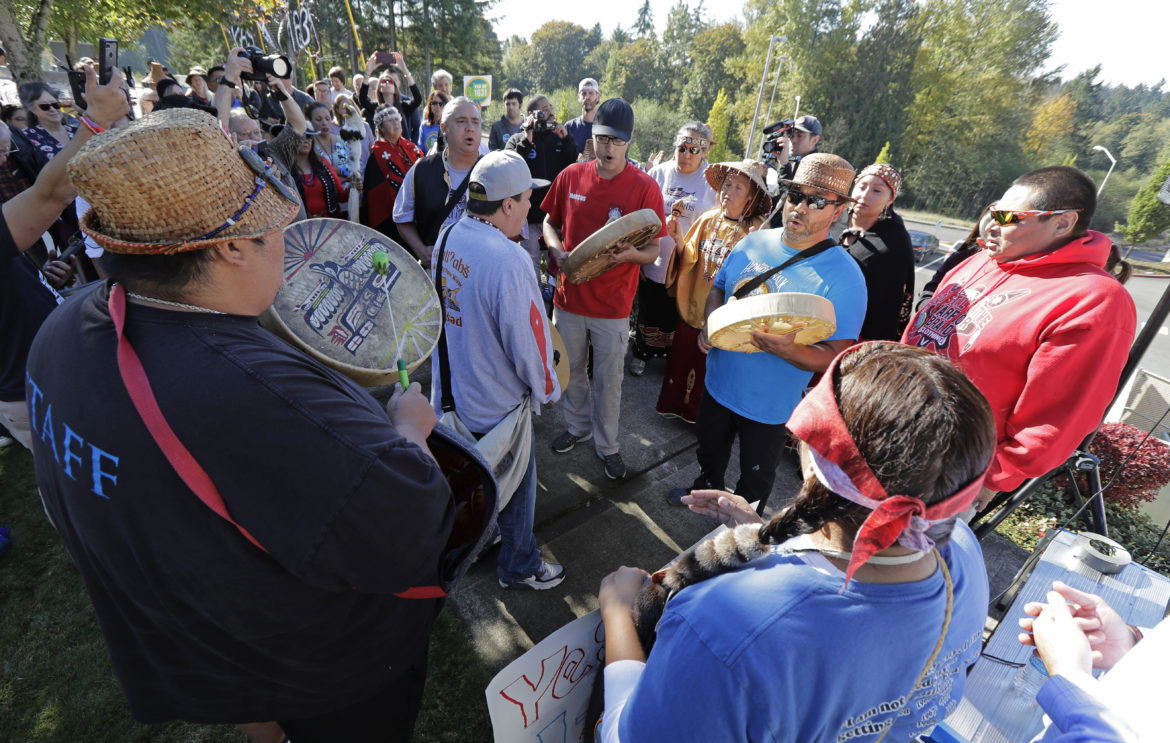 Tribal drummers sing a song, Wednesday, Oct. 17, 2018, at a rally supporting Initiative 1631, a November ballot measure in Washington state that would charge a fee on carbon emissions from fossil fuels. Voters defeated the measure on Nov. 6.

From today’s U.S. Energy News daily email digest, here is a rundown of key races and energy-related ballot measures around the country.

MIDTERMS:
• Voters in several Western states reject ballot measures that would have moved them away from fossil fuels and toward clean energy. (Washington Post)
• The outcome of several gubernatorial races could have implications for clean energy development. (E&E News, subscription)
• Nearly one fourth of the Republican members of the House Climate Solutions caucus were defeated, but the impact is unclear. (Greentech Media)

ALASKA: Alaska voters strike down an initiative extending new protections to the state’s salmon, an effort hotly opposed by the oil and gas and mining industries. (KTOO)

ARIZONA: Arizona voters overwhelmingly reject a ballot measure that would have required the state to get half of its energy from renewable sources by 2030. (Arizona Republic)

COLORADO:
• Colorado voters soundly reject a ballot measure that would have increased drilling setbacks, a move industry officials say would have gutted the state’s lucrative oil and gas sector. (Denver Post)
• Voters in Boulder and Lafayette, Colorado pass a levy on oil and gas operations in the city limits even though it’s been a decade since a company filed a permit to drill. (Boulder Daily Camera)

GEORGIA: Republican incumbents were on track to hold off challengers for two seats on the Georgia Public Service Commission. (Marietta Daily Journal)

NEVADA:
• Nevada voters approve a proposed constitutional amendment that would require the state to get half of its energy from renewable sources by 2030. (Las Vegas Review-Journal)
• In another expensive race, Nevada’s largest utility will retain its monopoly in the state after voters reject a ballot measure to restructure the energy market and open it to competition. (Nevada Independent)

NORTH DAKOTA: The defeat of Sen. Heidi Heitkamp may jeopardize the future of “clean coal” and carbon capture and sequestration. (Politico)

OREGON: Portland voters overwhelmingly approve a tax on large retailers in the city to fund clean energy and efficiency programs. (The Oregonian)

WASHINGTON:
• A ballot measure to create the nation’s first carbon tax was poised to fail, though the campaign was not ready to concede. (Reuters)
• Voters’ rejection of the carbon tax suggests one of the nation’s most progressive states still struggles to pass muscular climate policy. (The Atlantic)
• Proponents of Washington’s carbon tax campaign said they are already thinking ahead on how to push the issue through legislation. (Seattle Times)