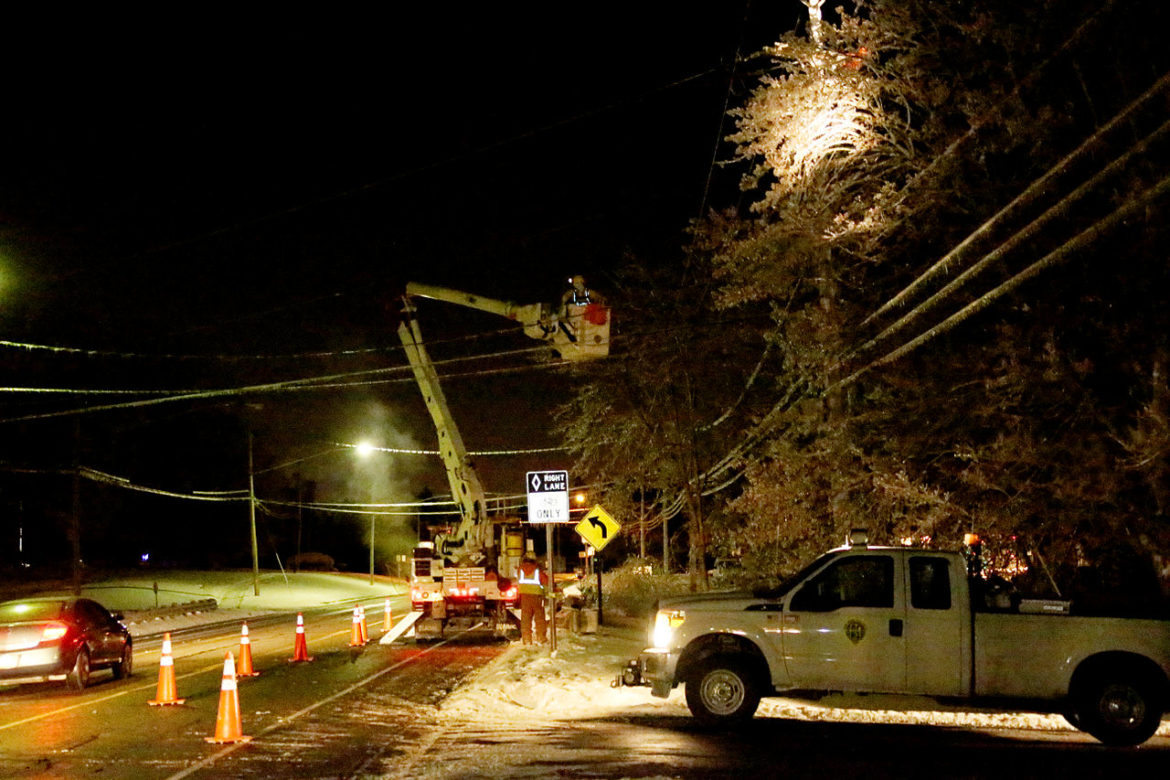 A Consumers Energy crew works to restore power in Flint, Michigan, after an ice storm in December 2013.

Michigan’s two largest utilities plan to spend $7.2 billion over the next five years to improve electric reliability while preparing for more electric vehicles and distributed generation.

Clean energy groups, however, have raised concerns about the cost-effectiveness of the proposed plans and the extent to which DTE Energy and Consumers Energy are truly preparing a grid of the future instead of just updating old equipment.

“For quite a while the commission and the utilities have paid relatively little attention to distribution investments,” said Douglas Jester, partner at 5 Lakes Energy, a Lansing-based clean energy consulting firm.

The Michigan Public Service Commission required five-year grid modernization plans from Consumers and DTE based on the companies’ anticipated spending on increasingly out-of-date distribution assets. While upgrading equipment and tree-trimming are among the utilities’ top priorities, regulators also want to see a roadmap that accounts for more advanced grid interaction.

“We’re going to need a significant rebuild of the existing electric distribution system,” Michigan Public Service Commissioner Norm Saari said at a conference in Grand Rapids last month. “We’re talking about a significant financial resource that comes from only one place: customers’ bills.”

Until now, most distribution investments have been reactionary, like adding substations to meet new loads. The growth of electric vehicles and distributed generation are forcing utilities to be more proactive. Utilities are also looking more to distribution projects as a revenue source since demand for generation has flattened in much of the country due to increased energy efficiency.

“Particularly with distributed generation, it’s definitely at the forefront of our thinking about what we have to do in the future,” said Tim Sparks, Consumers’ vice president of electric grid integration.

In its 20-year integrated resource plan, Consumers is calling for at least 5,000 megawatts of new solar throughout its distribution system.

“We have to get that distribution in place where it can accept that resource,” such as allowing for two-way power flows, Sparks said. “The infrastructure and technology it takes to do that is certainly top of mind. We have got to change how the system operates.”

Six years ago, Gov. Rick Snyder first identified electric reliability as a key infrastructure priority. While Michigan ranks in the second quartile for the number of power outages, outages tend to last longer than in most other states.

“We’re seeing increased costs with these failures that are occurring,” he said. “We’re expecting that through these investments we will bend the curve in terms of the increase we see in reactive maintenance costs.”

Bruzzano said Michigan’s aging electric infrastructure — approaching 75 years old in some areas — is driving the state’s poor reliability rating. This includes substations and critical assets inside them, transformers and breakers, distribution poles and wires, and underground cables beyond their useful life.

“Where population grew in other parts of the country, their infrastructure is newer than ours. Because of the trends here, utilities were not able to justify the investments,” Bruzzano said. “We’ve been trying to extend the life of the assets as long as possible.”

However, the trend is beginning to shift. Bruzzano and Sparks said Michigan’s economic rebound since 2008 is increasing the number of connection requests.

“A big part of [new investments] is to serve the new load,” Bruzzano said.

Sparks said the next five years will be “fairly heavily weighted” toward replacing equipment like poles and wires at the end of their useful life.

“At the same time we’re trying to mix in some new technology,” he said, including remote-sensing equipment and automation that is able to transfer circuits and recover power faster.

These investments will be included in future rate cases. While clean energy advocates say it’s early in the process, they hope the utilities will be more forward-thinking.

‘[Utilities] need to continue to think about employing technology in order to help decrease future costs and increase resilience and reliability.’

“A decent chunk of the recommendations still gives us a little bit of pause,” Eichler Clark said of the utilities’ plans. “They need to continue to think about employing technology in order to help decrease future costs and increase resilience and reliability.”

Public service commission staff recommends requirements for dynamic system load forecasting, or predicting how power demand is going to change in the coming years, as well as utilities’ capacity to host distributed generation and how they’re communicating that with generators.

Ric O’Connell, executive director of GridLab and an expert on emerging grid issues, wrote this month that it’s important for utilities to spend on non-wire alternatives to avoid crowding out spending for distributed resources.

“‘Dumb’ distribution spending that only focuses on reliability or resilience can crowd out spending on infrastructure to support a grid transition to a cleaner, more affordable and more reliable grid,” he wrote.

While Michigan utilities are beginning to talk about grid modernization, Jester said short-term plans through 2021 still favor traditional equipment replacement to address the frequency of outages rather than technology that could reduce the duration of outages.

Indeed, Jester said, the utilities are already seeking rate increases to pay for these “first generation” investments despite what he calls a lack of accountability over their cost-effectiveness. The short-term proposals are in rate cases before the commission.

“There’s no accountability about whether the spending produces the outcomes that were proposed,” Jester said. “Real homework needs to be done on that before the commission endorses substantial investments.”

Utilities are required to invest annually in their distribution systems. Jester said the five-year plans are “more or less a permanent increase in that rate of spending.”

Jester’s concern is that Michigan utilities will continue to do relatively well in the number of outages but poorly in outage length.

“They have not gone as fast on some of the investments in smart grid software to manage outages as some of their peer utilities have,” he said. “When we’re already in the top half of the country in frequency of outages, but among the worst in time to restoration, that suggests we need to pay more attention” to outage length.

Consumers has also faced criticism for attempts to lower the amount of taxes they pay on transmission and distribution equipment. The company has lobbied lawmakers to shield the company from higher tax payments that would be owed on new infrastructure — amounts that would be directed to school districts and local governments. The legislation, introduced by Republican Sen. John Proos, has stalled in committee since June.

Meanwhile, Jester says part of the problem is that utilities have spent less on their distribution system than what has been approved in rate cases.

Sparks said this is mostly due to higher-than-anticipated connections for new loads, which ends up shifting distribution spending elsewhere.

“We have seen in the past few years a large increase in the amount of spending we’ve had to make on new customers connecting to the system,” Sparks said.

Public service commission staff agrees that there could be improved transparency on costs. The five-year plans “could benefit from more openness and transparency for regulators and stakeholders to independently analyze the reasonableness, prudence and cost-effectiveness of the distribution plans,” staff said in its September report.

The report adds that the plans “lack proposed investments in customer-facing programs and technologies that provide customers with the information to make informed energy decisions in the near term.”

A key driver of the utilities’ plans is more anticipated distributed generation. Grid infrastructure was designed decades ago for centralized power plants sending power on a one-way flow away from the plant.

Distributed generation is not just rooftop solar, for example, but also the broader build-out of modular solar projects and combined heat and power plants.

“We know distributed generation is going to grow in the state,” Bruzzano said. “We’re not 100 percent sure of the pace, but we need to be ready for them.”

“The planning exercise revealed there are aspects of the distribution system that they were underinvesting in in fairly significant ways,” he said. “Those are going to have to be addressed.”

Michigan joins states like Minnesota, Illinois and Ohio that have also started grid modernization projects, which include in-depth planning across a wide section of stakeholders.

“Michigan has been phenomenal, sort of under the radar,” Eichler Clark said. “It’s been a real collaborative process.”

As the plans move forward, advocates want to ensure utilities are making investments that will prevent reactive measures in the future.

“There’s lots of discussions across the nation and the state on the utility of the future,” Eichler Clark said. “The only thing I would say is: You can’t predict the future, you have to enable it.”