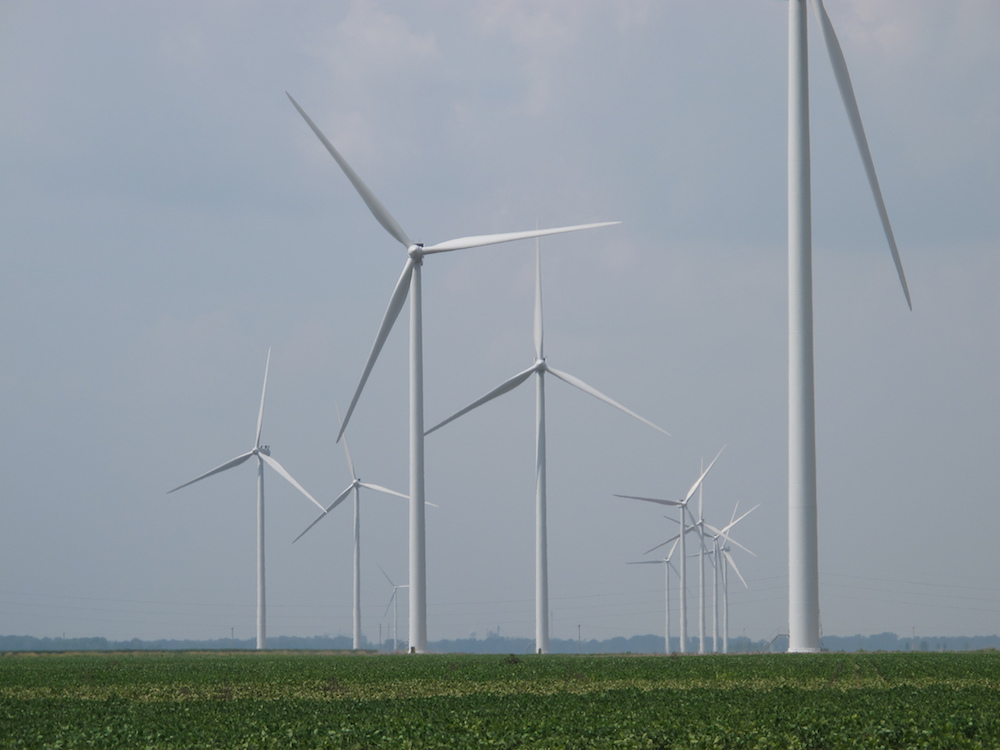 The eleventh-hour add-on to a 2014 state budget bill didn’t allow stakeholders to respond to proposal, a complaint says.

A lawsuit filed this week over Ohio’s wind turbine setbacks centers on whether landowners, developers and others had a chance to be heard before the stricter terms were adopted as part of an eleventh-hour budget bill amendment in 2014.

“We’ve been trying to get this fixed legislatively for the past couple of years, but to no avail,” said Bruce Burcat, executive director of the Mid-Atlantic Renewable Energy Coalition. “And therefore we felt we had to resort to litigation.”

House Bill 483’s property line setbacks became part of a massive 2014 budget bill less than 24 hours before its passage by the Ohio Senate. Barely 10 minutes of discussion on the provisions took place on the Senate floor.

In that short time, then-Sen. Bill Seitz, R-Cincinnati, railed against potential nuisance issues from wind turbines and claimed the new provisions would make wind turbines “play by the same rules that everybody else plays by.”

“Seitz failed to note that the law already contained a separate setback from a property line equal to 1.1 times the turbine height,” the complaint says. “Transparent public discussion of this amendment, including landowner and wind industry input, could have easily averted this apparent confusion.”

State Sen. Mike Skindell, D-Lakewood, warned at the time that adding that any stricter setbacks should be “debated [in] a reasonable manner, not just tucked away without any public discussion in a bill.” Yet the bill passed with the new provisions, and Gov. John Kasich signed it into law.

That “tucked away” issue forms the basis for the plaintiffs’ constitutional challenge now. The relevant part of the Ohio Constitution says “[n]o bill shall contain more than one subject, which shall be clearly expressed in its title.”

The parties suing the state allege that the law “is a classic example of ‘logrolling.’” That kind of horse-trading practice typically combines unrelated proposals to get support from lawmakers who might trade support for one part of the bill if another part includes something to their advantage.

“It is apparent that the General Assembly tactically combined the provisions in H.B. 483 in order to assure their passage where none might have passed individually, especially a functional wind energy moratorium,” the complaint says.

Ohio lawmakers had considered other, more comprehensive energy bills that same term. One of those other bills signed into law within days of HB 483 weakened Ohio’s clean energy standards and then froze them for two years.

And while HB 483 contains a wide range of provisions that deal with other subjects besides budgeting, “this is different,” Burcat said. Provisions about museum operations, cybersecurity, prevention of child abuse, and other topics had some tangential link to appropriations, he said. In contrast, the wind setback terms were “unrelated to the budgeting and appropriations aspects of the bill,” he noted.

“The impact of this provision in the budget bill has been very hurtful for Ohio, and especially Paulding County, where we filed the suit,” Burcat said.

Projects prevented by the 2014 law could have brought more than $4.2 billion in investments into the state, creating more than 13,000 jobs, the complaint alleges.

And landowners who want to lease part of their farmland for wind turbines are missing out on a “cash crop,” Burcat said. Rural landowners often earn as much as $15,000 per wind turbine each year, the complaint says.

The Ohio Environmental Council is not a party to the lawsuit, but Trish Demeter, the organization’s vice president for energy policy, agreed that the stricter setbacks have “stifled” industry growth and hurt communities.

Ohio farmers, landowners and school districts have been missing out on economic and environmental benefits they could have enjoyed but for the “draconian wind siting requirements that the Ohio General Assembly imposed on wind energy companies over four years ago,” Demeter said.

Several bills have endeavored to reform the 2014 setback provisions. One bill would have let county commissioners decide whether to revert to the pre-2014 standards. Other bills offered a compromise of slight increases over the pre-2014 property line setbacks.

The current Senate version of HB 114 would provide a rollback along the lines of those bills, but only with further weakening of the renewable energy and energy efficiency standards. Even if the bill passed in the lame-duck session, the Ohio House need not necessarily accept the rollback in any conference committee.

Indeed, the Ohio Senate included a rollback of the property line setbacks in a budget bill last year. At that time, the Ohio House refused to accept the rollback, with Seitz stating that it “had no place in a budget bill.”

“Our office is reviewing the lawsuit,” said spokesperson Kate Hanson at the Office of Ohio Attorney General Mike DeWine.

The state’s response could take the form of an Answer, admitting or denying various allegations. Or the state could file a motion, asking the court to rule on the constitutional claim as a matter of law.

In general, Ohio courts have construed the constitution’s single-subject rule broadly, taking a liberal approach to what the “subject” of a law is. But that doesn’t mean anything goes under the state constitutional provision, especially where stealth may have been involved.

“The plaintiffs have a strong case,” in Demeter’s view. “The amendment was passed in a rushed process that was not entirely above-board.” As a result, new, non-grandfathered projects in wind energy were, for the most part, “frozen out of the state, and that’s just not right.”

If the court ultimately agrees with the plaintiffs, its ruling could invalidate the 2014 property line setbacks, leaving them to revert to the prior levels. Nonetheless, years can pass between the filing of a lawsuit and a decision by the court, followed by resolution of likely appeals.

“We would have preferred to work through the legislative process,” Burcat said. “We’ve tried. But unfortunately, we have not had any real traction to get this issue fixed or addressed.”