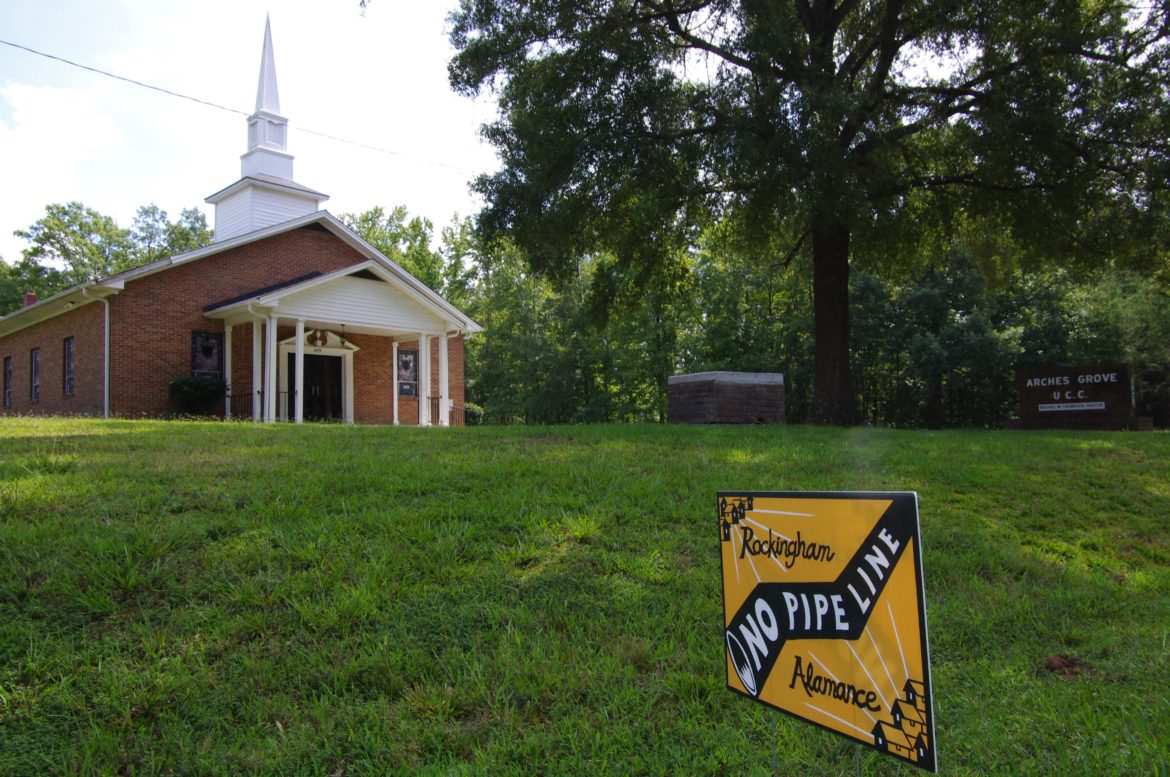 Arches Grove United Church of Christ, along the proposed path of the Mountain Valley Pipeline extension in Burlington, North Carolina.

Still confronting backlash for its role in approving one interstate gas pipeline, the administration of North Carolina Gov. Roy Cooper is taking a different tack with a second project on the horizon.

In a letter this month to federal pipeline authorities, a top Cooper environmental official sharply questioned the need for Southgate, a proposed extension of the Mountain Valley Pipeline from Virginia into Rockingham and Alamance counties.

“After examining filings … and conducting research and outreach to better inform our understanding,” wrote Sheila Holman, assistant secretary for the state’s Department of Environmental Quality, “we remain unconvinced that this Southgate Project is necessary.”

The much longer Atlantic Coast Pipeline, whose backers applied for federal approval more than a year before Cooper took office, clearly informed the administration’s actions on the most recent pipeline proposal.

The letter marks the second time this year state officials have written the feds expressing concern about the need for more pipeline infrastructure, citing insufficient demand, the threat of climate change, and other critiques that match those raised by pipeline foes.

North Carolina has limited authority to stop interstate gas projects once the Federal Energy Regulatory Commission has deemed them in the public interest. Since the commission has yet to make that determination for Southgate, the letter may be the state’s best opportunity to influence the project.

‘We’re confined to the law’

The Federal Energy Regulatory Commission last year green-lighted the 600-mile Atlantic Coast Pipeline, designed to carry fossil gas from the Marcellus Shale through the Virginias and into eastern North Carolina, ending in Robeson County near the South Carolina border.

Backed by Duke Energy and Dominion Resources, the pipeline is regulated by a thicket of state and federal laws. But the commission’s approval was the most pivotal, largely leaving state regulators to determine not whether the project could be built, but how.

Section 401 of the Clean Water Act requires states to certify that pipelines won’t irrevocably harm rivers and streams. New York and Connecticut have denied such permits for three projects in recent years, and activists had pushed the Cooper administration to do the same for Atlantic.

But such an outright rejection under North Carolina rules is exceedingly rare. Since 1984, the state has failed to grant just 150 certifications out of more than 43,500 requests.

Applicants typically confer with regulators early in the process to circumvent some impacts and minimize others. Duke and Dominion began those consultations with Cooper’s predecessor Pat McCrory, an unabashed advocate for fossil fuel infrastructure.

Though the DEQ under Cooper repeatedly asked Duke and Dominion for more information about Atlantic’s impacts on water quality, officials ultimately concluded they were on firmer legal ground by granting the certification than rejecting it.

(On the same January day the department granted the 401 permit, Cooper announced a $58 million environmental mitigation fund to be financed by Duke and Dominion. Some pipeline opponents decried it as an apparent pay-to-play scheme, while pro-pipeline Republican lawmakers said it looked like extortion. Cooper has denied both assertions, but the controversy continues nearly a year later, with a legislative panel voting last week to hire an outside investigator.)

“Irrespective of how we may feel personally or professionally,” Regan responded, “we are confined to the law.”

Still, anti-pipeline activists have been unrelenting in their criticism of Cooper’s approval of the project, staging continued protests urging the governor to halt construction, continuing to press for public records, and pointing out the project conflicts with Cooper’s October executive order committing North Carolina to the Paris Climate Accord.

The federal commission approved the original 300-mile Mountain Valley Pipeline last year along with the Atlantic Coast Pipeline. But the pipeline company applied this month for federal permission for its Southgate extension, intended to serve mostly residential customers of the gas utility PSNC.

That gives DEQ the opportunity to weigh in with the commission before it makes its crucial determination of need. Holman, the assistant secretary, stopped short of opposing the extension in the Nov. 5 letter, but she made her department’s skepticism of the project clear.

“We question whether the project satisfies the criteria for the Commission to deem it in the public interest, and whether it is essential to ensure future growth and prosperity for the residents of the state,” Holman wrote.

Holman argues the pipeline company’s own filings indicate there’s a sufficient supply of natural gas in the area to satisfy current and future projected demand. Combined with the Atlantic pipeline, she said, Southgate would even create an excess of gas. Finally, she points out in the letter, the 26-inch wide, 70-mile long pipeline doesn’t have sufficient customers lined up.

“The Southgate project is not fully subscribed to warrant a large footprint in North Carolina,” Holman wrote.

FERC has rarely deemed pipelines unwarranted, rejecting only two applications in the last 30 years out of hundreds received. Yet as investors have proposed a spate of new projects in the wake of the fracking boom, critics have repeatedly called on the commission to reexamine its process for greenlighting more infrastructure.

The commission relented, and that examination is now underway, giving DEQ a chance to critique the process by which the feds approves pipeline infrastructure in general.

The agency in July sent FERC a nine-page letter replete with footnotes and recommendations. DEQ urged the commission to redo its method for determining whether a pipeline is necessary, warning that ratepayers could get saddled with stranded assets after clean energy and battery storage becomes cheaper than fossil gas. The agency criticized the commission’s track record of allowing pipeline investors to justify need by putting themselves up as customers.

“FERC currently relies on precedent shipping agreements as a proxy for future energy demand, agreements and contracts that are too often made between and amongst pipeline affiliates,” Holman wrote.

“We have concerns about the Commission’s current approach to reviewing natural gas projects that are sited in and directly affect our State, our citizens, and our environment and natural resources,” Holman said.

‘They’re asking all the right questions’

But the commission’s three other members were appointed by President Donald Trump, who early in his tenure pledged to streamline the approval process for new gas infrastructure and has waffled on his acceptance of climate science. Commission Chairman Neil Chatterjee is a former energy policy advisor for Senate Majority Leader Mitch McConnell, a long-time champion of fossil fuels.

Still, said Sierra Club’s Walker, “FERC is on the hook to address those issues in the regular course of reviewing a pipeline project like this. That’s what their jobs is: to ask those same questions and look at all the same evidence as DEQ has in this [Nov. 5] letter.”

Pipeline foes like Vick, meanwhile, welcome DEQ’s statements but say they don’t make up for its approval of the Atlantic pipeline, which she maintains should have been rejected because of its impact on water quality.

“It’s all in his wheelhouse,” Vick said of Cooper.

In the end, the fate of the pipelines in the region could come down to the courts, who have struck down a string of environmental permits for both projects. Last month, one of Mountain Valley’s Virginia clean water permits, under legal challenge in the 4th U.S. Circuit Court of Appeals, was suspended. This month, the same court invalidated Atlantic’s permission to bore through streams and rivers in the Allegheny Highlands of West Virginia.

Asked about DEQ’s motivation for its two letters, spokeswoman Bridget Munger provided little additional context, saying only that the agency had already received questions about the need for the Southgate project.

“This is information that should be shared with FERC at the front end of the review process,” Munger said, “while FERC is making the decision on whether there is need for an additional pipeline.”

For now, Walker said, that was about all her group could ask of DEQ.

“They’re asking all the right questions and really looking out for North Carolinians,” she said. “That is as strong as I could expect them to be.”