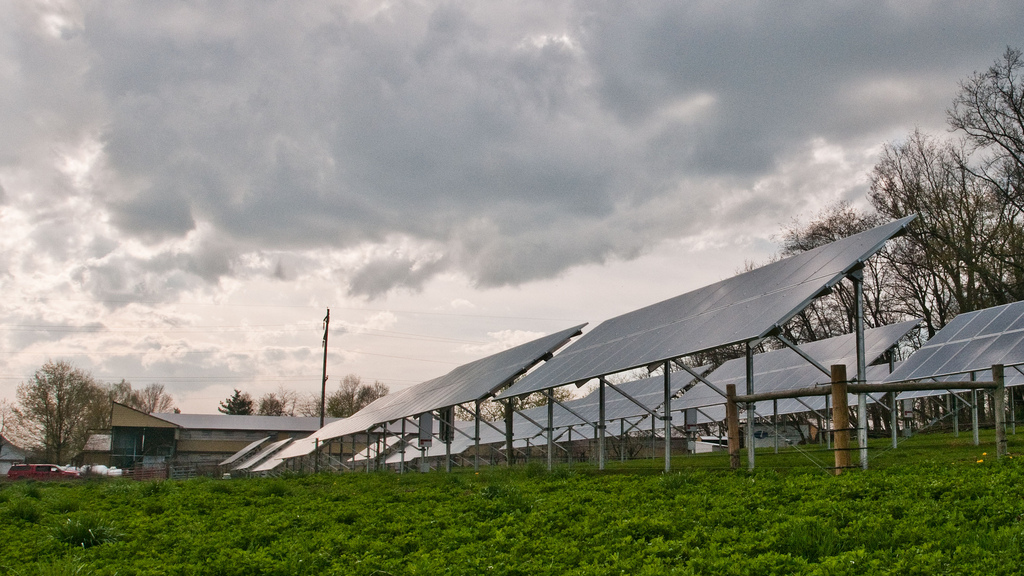 Solar panels at a Pennsylvania farm.

Pennsylvania environmental regulators are shining a light on ways the state could sharply increase its reliance on solar energy — potentially creating thousands of new jobs and cutting emissions in the process.

About one percent of the electricity currently generated in Pennsylvania comes from renewables. A fraction of that — only .1 percent — comes from solar. A new report called Finding Pennsylvania’s Solar Future outlines 15 ways the state could grow the industry to 10 percent of electricity generation by 2030.

‘We’ve seen a lot of states leapfrog past us’

Patrick McDonnell heads Pennsylvania’s Department of Environmental Protection and called it a win-win, because it would create new jobs and lower greenhouse gas emissions.

“It’s an aspirational target,” McDonell said. “The governor’s been really clear about wanting to take advantage of all the resources we have.”

Under a 14-year-old law, known as the Alternative Energy Portfolio Standard, Pennsylvania utilities are required to purchase .5 percent of electricity from solar sources by 2021. It’s far less than the targets set by other Northeastern states, such as Massachusetts of New Jersey, which require 8.5 percent and 3.8 percent respectively.

“When we passed the [portfolio standard] in 2004, that was a very forward-looking goal,” said McDonnell. “A lot has changed since then. The installed cost of solar has come down significantly. We’ve seen a lot of states leapfrog past us.”

Depending on how solar continues to develop in Pennsylvania, either with larger grid-scale projects, or smaller distributed generation (like rooftop panels), the report found that achieving the 10 percent goal could create between 60,000 to 100,000 new jobs and lower emissions from the state’s electricity generation sector by 9.3 percent.

The state would need to add about 11 gigawatts of solar to get to the 10 percent goal by 2030, according to the report. It calls for sustaining the growth of distributed systems and accelerating the development of grid-scale solar.

The plan is the outcome of a $550,000 grant from the U.S. Department of Energy. Over the past year the initiative brought together leaders from industry, government, local communities and academia to weigh in on how to expand the state’s reliance on solar power.

Gov. Tom Wolf, a Democrat, was just re-elected to a second term, and he’s expressed interest in joining the Regional Greenhouse Gas Initiative — a market-based system among northeastern states for lowering emissions, but it’s unclear how much support he’d have from the Republican-controlled legislature.

Rob Altenburg is with PennFuture, an environmental group that was a contractor working for the Department of Environmental Protection on the solar report.

“We realized we needed some marker that was beyond business-as-usual but still within the realm of possibility,” he said. “We picked 10 percent because we think it’s in that range.”

He added that the report deliberately does not rank the recommendations in terms of importance.

“The way we’re trying to position the report in general, is to say okay, ‘Here are all the things we need to do.’ Assuming lawmakers decide they want to expand solar in the state, these are the different things that are worth considering.”

The report calls on lawmakers to increase the carve-out for solar in the Alternative Energy Portfolio Standard to four to eight percent by 2030.

If Pennsylvania legislators decide to expand the Alternative Energy Portfolio Standard anytime soon, Altenburg expects it would be wrapped up in a bigger package to bail out the state’s nuclear power industry, which is struggling to stay afloat amid flatlining electricity demand and competition from natural gas and renewable energy. Other states, like New York and Illinois, have recently taken similar steps.

“If they’re going to be moving a bill on nukes, we certainly want to have [the power standard] at least on the table and part of the discussion,” Altenburg said.

Over the past decade, he said, Pennsylvania’s drilling boom has prompted a buildout of natural gas-fired power plants while disrupting coal and nuclear generation. He believes renewables, like solar, have been a casualty of the ongoing “fuel wars.”

“It’s my sense that the elections a couple weeks ago are bringing in to the legislature a lot of members who care more about renewables,” Szybist said. “But at the same time, the General Assembly is now more polarized than it was before, because a lot of the moderate Republicans from southeastern Pennsylvania who lost are some of the Republicans who are the most sympathetic to renewable energy.”

It’s unclear how much interest lawmakers have for the recommendations in the report. A spokesman for the House Republicans said he has not yet had time to review it, while noting that his caucus has shifted further to the right in the wake of the midterm elections.