A 13.5-kilowatt solar PV installation powered Bill Bailey and Gayle Chatfield's wholesale greenhouse operation before they retired. The Wisconsin couple were among the forces behind a wildly successful solar group buy carried out this year.

“It was a unique situation,” an energy company official said — an all-volunteer citizens nonprofit group led the charge.

Correction: Danielle Kelly is lead sales consultant for Next Energy Solution. A previous version of this story misreported her position.

But Bill Bailey and his wife Gayle Chatfield have been able to do just that, using almost entirely renewable energy, for the past five years. In 2013 they installed 13.5 kilowatts of solar PV to power their commercial greenhouse operation; a few years earlier they had gotten solar thermal units for the greenhouses.

The solar installations along with two biomass boilers met nearly the entire power needs of their business, “saving us hundreds of dollars in electricity and 16,000 gallons of propane each month,” Bailey said. “It was an eye-opener about how well this stuff worked and how it was such a good business decision.” 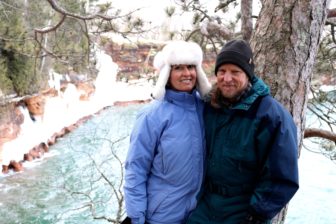 Bailey and Chatfield were among the forces behind a wildly successful solar group buy carried out this year in partnership with the energy company Next Energy Solution. With 78 installations totaling 470 kW, it broke the record to become the state’s largest solar group buy ever.

While group buys are often arranged by municipalities, such as Milwaukee, in this case the all-volunteer citizens nonprofit group Cheq Bay Renewables spearheaded the effort and worked with Next Energy Solution to arrange the buy. There’s already a waiting list for another group buy they hope to carry out next year.

“It was a unique situation with Cheq Bay Renewables, to really go out on their own and accomplish something like this,” said Danielle Kelly, lead sales consultant for Next Energy Solution, which is based about a two-hour drive away in Shell Lake, Wisconsin.

“It was great working with them, keeping it very local to the area. They really educated a lot of people before we even started playing a role — about price, about payback, about how these systems work, which was key to making this a very successful program. When you do that, all your local community members really put trust” in the project.

A group buy in Sauk County organized by the Midwest Renewable Energy Association was the second largest in the state in 2018, totaling 448 kW, according to a tally by RENEW Wisconsin policy director Michael Vickerman. In 2017, the largest group buy was a 335 kW one in central Wisconsin.

“Cheq Bay Renewables is quite the powerhouse,” Vickerman said. “Having a solar group purchase program in one’s locality substantially lowers the economic and psychological barriers that can stop a solar supporter from pulling the trigger on a new PV system. Especially in their first year or two of operation, solar group buys have boosted the number of solar installations in a given area 10 times or more.” 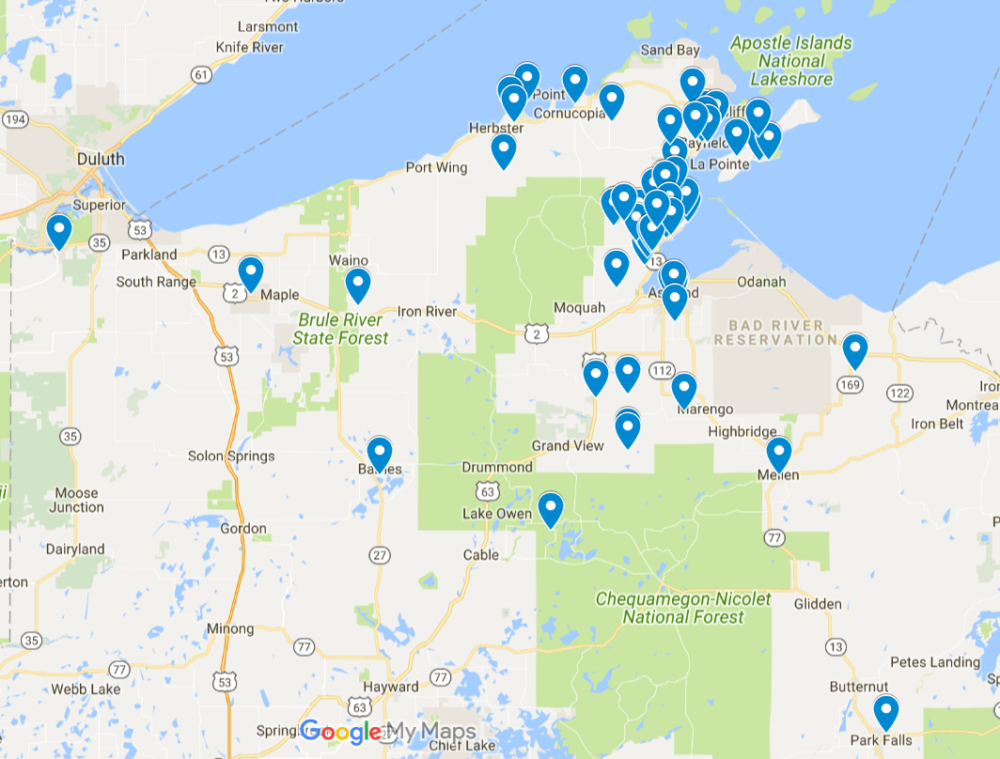 Next Energy Solution offers three tiers of cost for group buys, depending on how many customers are involved. Since the Cheq Bay group passed the 400-kW threshold for planned installations, everyone got the most affordable offering. Full installations cost about $2.45 per watt, Kelly said, and about 40 percent of the customers opted for a ready-to-install kit the company offers that costs less than $2 a watt.

‘It was a unique situation with Cheq Bay Renewables, to really go out on their own and accomplish something like this.’

Installations bought under the program ranged from 1.9 kW to 14.8 kW, including 66 residences, nine businesses and three municipal buildings — a garage, forestry building and town hall.

In a relatively remote region where many residents have a self-sufficient spirit, the popularity of the ready-to-install option was not surprising. “This community up here is quite different,” said Kelly, who met with residents weekly during the group buy process. “The savings may drive [most] people to do something like this, but for them it’s a lot about clean energy and the resilience of the community up there. It’s quite amazing.”

Some customers are on Madeline Island in Lake Superior, and others on the coast facing the Apostle Islands, about a 90-minute drive east of Duluth. Bailey, who is president of Cheq Bay Renewables, noted that local residents tend to be very environmentally conscious. Many are graduates of or otherwise affiliated with Northland College in Ashland, known for its environmental studies programs.

“This area is very green, or blue, whatever you want to call it — environmentally sensitive,” said Bailey, adding that Cheq Bay Renewables project manager Amber Vadnais also played a lead role in the group buy. “A lot of people have moved here because of concern about the environment.” 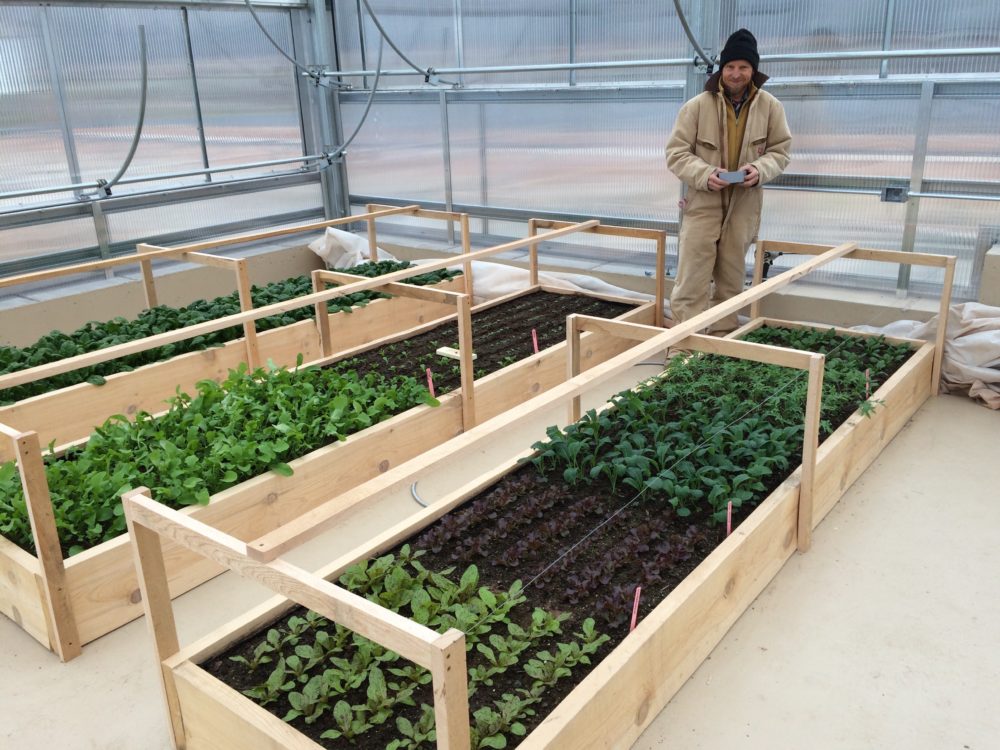 Aside from environmental motivations, Bailey said solar is clearly a good financial decision for residents. His and Chatfield’s ground-mounted PV installation was paid back with energy savings in seven years, and under the group buy and with current solar prices, the payback time would be shorter, he said.

Kelly said the local utility Xcel and Bayfield Electric Cooperative were both very helpful with interconnection and otherwise facilitating the project. Some customers were able to access rebates through Xcel as part of the state’s Focus on Energy conservation and efficiency program. The federal production tax credit also made the installations more affordable. 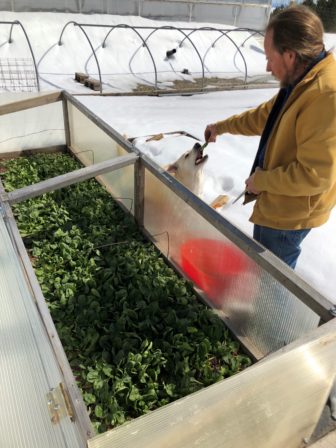 In late winter, Bill Bailey harvests spinach, which is grown outside in a cold frame with no added heat.

Along with the group buy, Cheq Bay Renewables is also pushing for solar on other fronts. The group is working with three local school districts in hopes of getting funding for installations totaling 635 kW, in part through the U.S. Department of Energy’s Solar in Your Community Challenge for underserved communities. Prizes they’ve already gotten through that program have paid for engineering and feasibility studies for the planned projects, Bailey said, and this fall the project was awarded a Wisconsin Energy Innovation grant.

About two years ago Bailey and Chatfield sold their commercial greenhouse business, which supplied retailers with perennials, herbs and produce. They kept their ground-mounted solar installation to power a smaller greenhouse where they grow their own food all year.

The buyer of one of their greenhouses, a five-generation family-owned orchard business, recently purchased their own 20-kW solar installation, Bailey said.