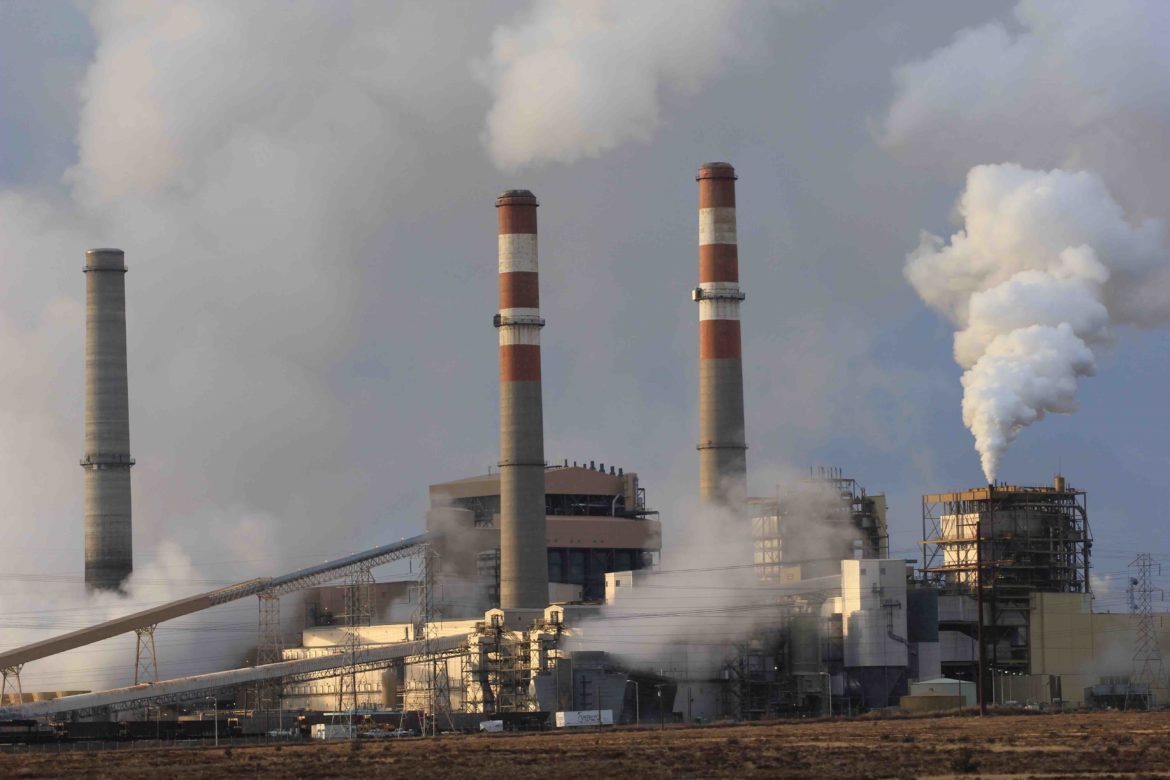 The Comanche 3 smokestack, far left, at the Comanche Generating Station near Pueblo, Colorado.

As Xcel Energy executives announced their vision of delivering zero-carbon electricity by 2050 in Denver on Tuesday, they may have also revived a long debate over the viability of carbon capture technology.

Xcel, which in 2004 fought a 10 percent renewable energy mandate in Colorado, says it now sees a pathway using existing technology to achieve 80 percent carbon-free energy by 2030 in Colorado and the seven other Midwestern states in which it operates.

Falling prices and improved technology have allowed the utility to incorporate vastly more renewable energy onto the grid than was once thought possible. Early last Saturday afternoon, Xcel set a new record of 72.2 percent of load being served to its Colorado customers by renewable generation. For the day, renewables were 65.3 percent.

And while renewables will continue to be a major part of the conversation, Ben Fowke, Xcel’s president and CEO, stressed that to fully decarbonize the grid, all tools need to remain available — including, possibly, carbon capture and sequestration (CCS).

“It could be carbon capture,” he said, noting several existing power plants in Colorado and Minnesota that he doesn’t want “retired prematurely.” But the technology, he said, “has a long ways to go.”

CCS technologies could be applied to both coal and natural gas burning plants. He conceded costly and repeated overruns at carbon capture projects underwritten by the federal Department of Energy, but insisted that the idea itself should not be ruled out.

“You don’t want to give up on things because of the early days,” he said.

When Comanche 3 went online in 2010, company officials said that it had been designed to be adaptable to carbon capture and sequestration. A 2007 Department of Energy study found considerable capacity to absorb carbon emissions in that area as well as several others in Colorado.

‘Many details to work out’

Alice Jackson, the chief executive of Xcel subsidiary Public Service Co. of Colorado, stressed the company’s ambitions to have partnerships and collaborations. She did not identify specifically what partnership Xcel hopes to forge, but the speakers who were chosen for the announcement, held at the Denver Museum of Nature and Science, may offer some clues.

First came Colorado Gov.-elect Jared Polis, who ran on a platform of 100 percent renewables by 2040, and then Denver Mayor Michael Hancock, whose city has embraced an 80 percent goal. Also speaking was Rich Powell, the executive director of ClearPath, a Washington D.C.-based organization that advocates for “developing and advancing conservative policies that accelerate clean energy innovation.”

He spoke of the need for baseload generation, “which will probably be part of this picture,” as well as “real clean fossil fuels.” Later, in an interview, he said that the answer may lie in “amazing new batteries or maybe CCS or nuclear. Maybe it’s other things we don’t even know now.”

What is needed, Powell said, are public policies that “first and foremost support research and development.” His group wants incentives for “anything that is low- or zero-carbon that comes onto the grid.”

He also mentioned barriers to technologies, including CCS under Clean Air Act regulations. “CCS needs to be part of the solution,” he said.

An August 2018 Congressional Research Service report said Congress since 2010 has provided more than $5 billion total for CCS-related activities. The Petra Nova plant in Texas is the only power plant in the U.S. capturing carbon dioxide in large quantities — over a million tons a year, according to the report.

“There are many, many details to work out, as Ben [Fowke] alluded to, but the most important first step has been taken, which is to set the right goals,” said Jon Goldin-Dubois, president of Western Resource Advocates, a Colorado-based nonprofit that is influential in environmental politics of the Southwest.

WRA’s Erin Overturf, deputy director of the group’s clean energy program, supported Xcel’s approach. “I would not write off any particular tools that we may have,” she said.

But Leslie Glustrom, a biochemist and founding member of Clean Energy Action and long an adversary of Xcel in proceedings before the Public Utilities Commission, urged her followers to be “very, very wary of the ‘carbon capture’ research and design part of Xcel’s proposal. It’s not likely to work at any price or scale that matters. The laws of chemistry and physics make that clear.”

‘We stand on their shoulders’

Bryan Hannegan, chief executive of Holy Cross Energy, a cooperative that serves the Vail and Aspen areas and owns 8 percent of Comanche 3, pointed to interest by Congress in furthering CCS research. A federal tax credit of $35 to $50 per ton of carbon “provides a healthy economic boost to CCS,” he said.

“The question that anyone with a fossil fuel plant has to ask is what are the comparative economics of the CCS versus all the other ways you might be able to reduce greenhouse gas emissions. That is a calculation that all of us who own fossil fuel plants have to do. The other alternative is to close those fossil assets premature, before their useful lives have ended.”

Holy Cross in September announced a goal of 70 percent renewables by 2030 and comparable greenhouse gas reductions goals. It gets a substantial amount of its electricity from Xcel. As such, he said Xcel’s goal will allow Holy Cross to elevate its own goals. “We stand on their shoulders and if the shoulders get higher, we can reach higher ourselves,” said Hannegan.

“Self-styled climate advocates will ask utilities what they can do to create programs and policies in support of renewable energy and other goals,” he said. “I would encourage them to think more holistically about the energy system. A key challenge will be moving decarbonization to other parts of the economy, including transportation and buildings.”

Others will question why there needs to be government involved when Xcel and other utilities are making major advanced on their own. But government, he believes, needs to play a role in development of new technology. Energy solutions, he said, must transcend typical divides or rural vs. urban, liberal and conservative, and other divisions that now cleave the nation.

Both in his remarks to reporters and then to a high-level audience at the museum, Fowke stressed the urgency of addressing climate change and the role of Xcel as being an innovator. But he also stressed the rapid pace of change that he believes will enable utilities to do their part.

“Just look at what we have done in the last 10 years,” he said. “Wind and solar are now 70 to 80 percent less expensive than they were just a decade ago,” he said. “Do you think the technology will be there by 2050? I think so.”

“What Xcel is trying to do,” he said, is “keep the eye on the prize, which is the carbon reduction at the lowest cost possible.” Xcel’s aim is to create the model that “will be replicated by every other utility in the United States. That’s the way that capital works.”

Note to readers: An earlier version of this story incorrectly stated that Bryan Hannegan worked for the Obama administration.