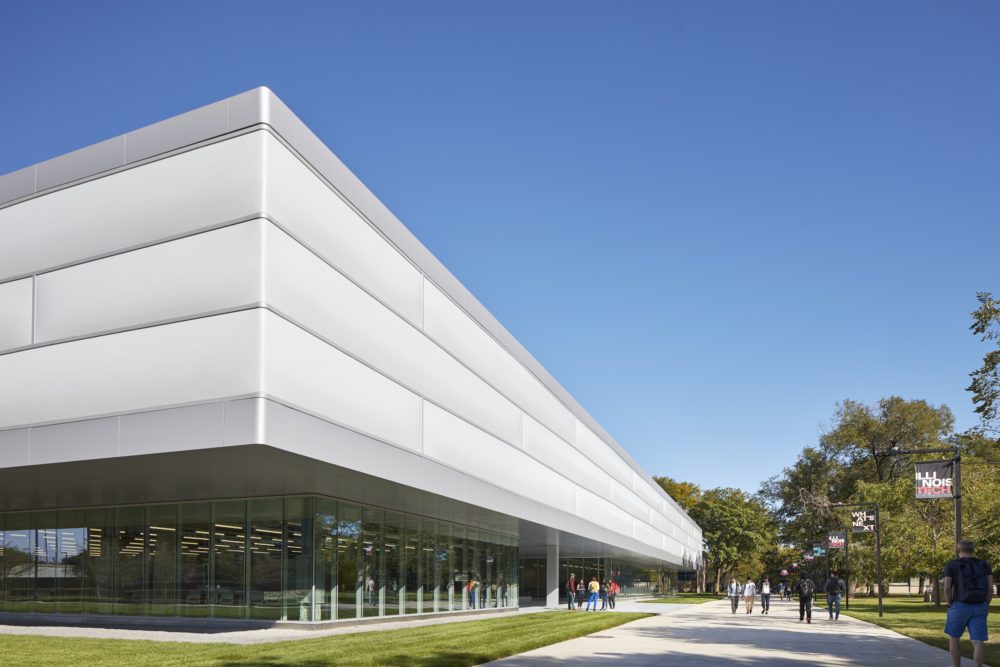 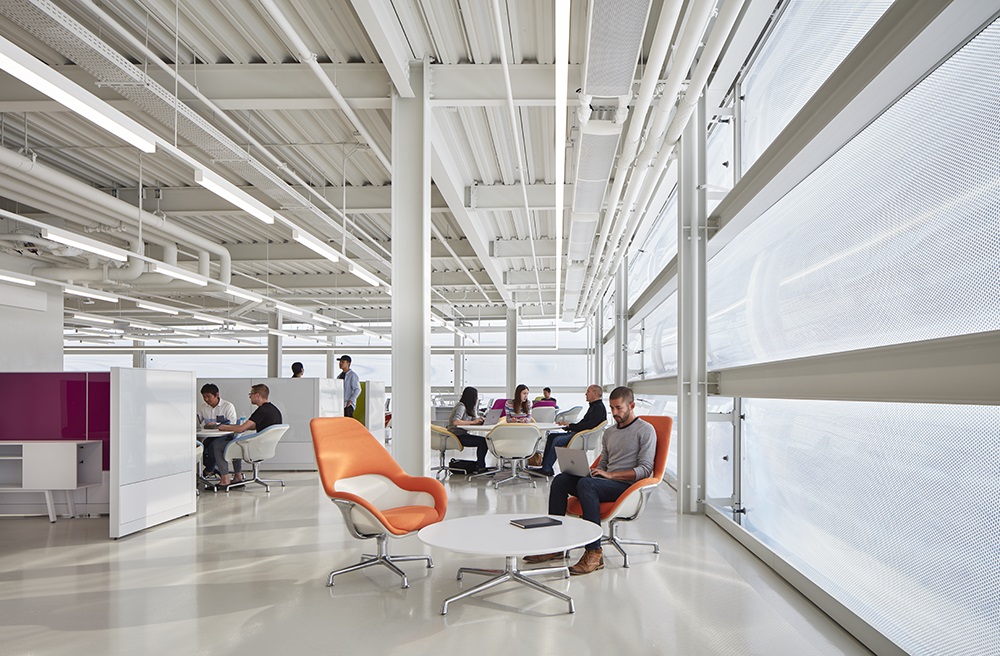 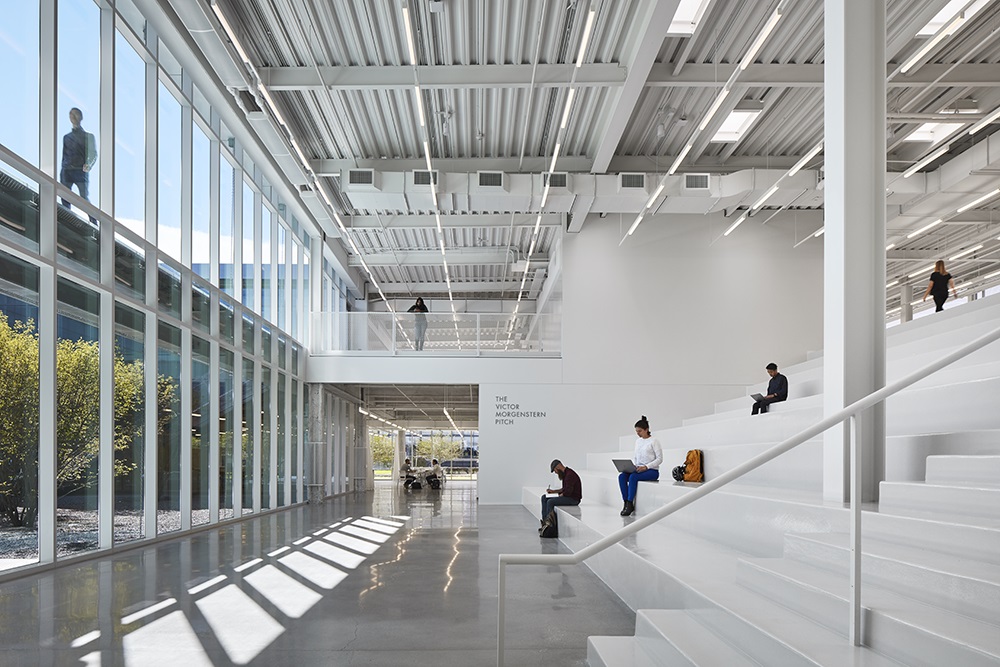 “We think that this center is a place to generate new ideas in the energy field and combine the students, the faculty, and industry,” said Kaplan Institute Executive Director Howard Tullman. 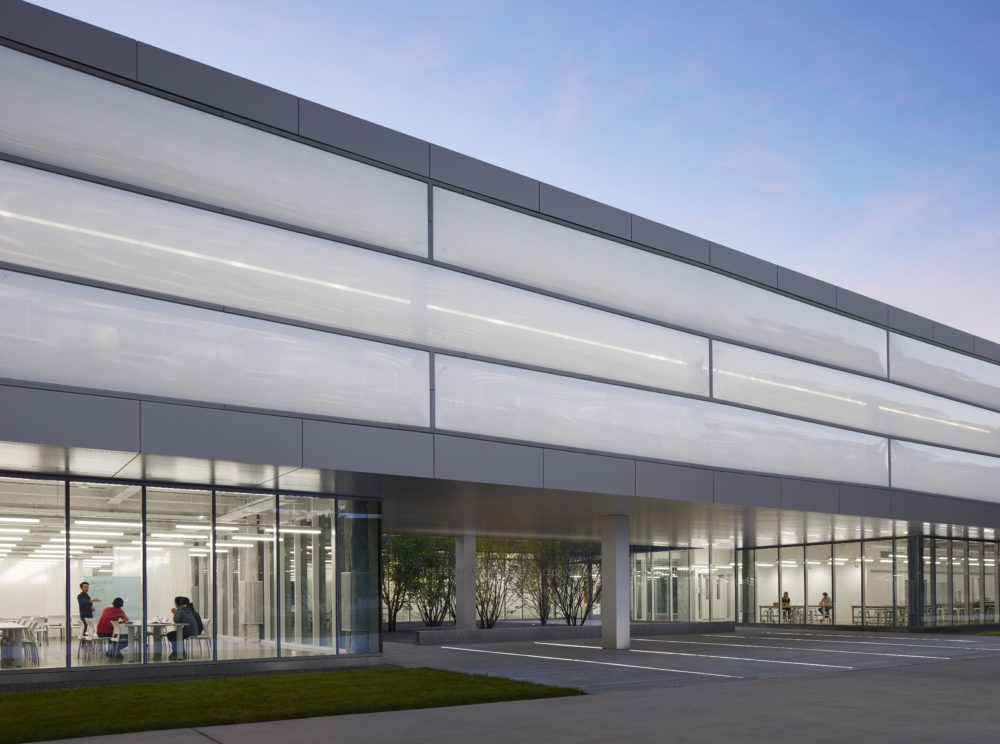 The futuristic building is wrapped in several layers of an innovative material that help control how much energy is used and manage sunlight into the center.

With a collaborative approach, the center’s leader aims to foster the development of ambitious clean energy solutions.

Illinois Institute of Technology opened the doors to a 70,000-square-foot, $37 million innovation center last month that will be home to ambitious industrial collaborations, where engineering students will partner with faculty and businesses to collaborate on big-picture ideas — from electric cars and grid management to the internet of things.

Leading the project is Howard Tullman, Chicago’s serial entrepreneur and longtime leader of 1871, another innovation center. He said that some of the highest priorities for the collaborative projects will be around the development of clean energy technology.

“We think that this center is a place to generate new ideas in the energy field and combine the students, the faculty, and industry,” Tullman said. “We think that the desire to support some of these things is out there in industry.”

‘We think that this center is a place to generate new ideas in the energy field and combine the students, the faculty, and industry.’

The Ed Kaplan Family Institute for Innovation and Tech Entrepreneurship is a futuristic building wrapped in several layers of an innovative material that help control how much energy is used and manage sunlight into the center.

In the past, Tullman has said that the school will be training people for careers that don’t yet exist, using technology that will be invented on the new campus. But what are some of the problems keyed up to solve?

Tullman said one is finding a clean solution for the so-called last-mile problem — the short trip from the subway or bus station to the pharmacy or grocery store. Tullman is looking for “a zero-carbon footprint to move people to hospital appointments and back, and to do all these last-mile things,” he said.

It’s a local problem for IIT and the surrounding community. In August, the Chicago Transit Authority announced that it was ending a bus pilot along 31st Street, a route that serviced a small group of students and seniors. Tullman believes that 31st Street could be an ideal testing area for autonomous electric vans.

“They would serve our students and our campus and connect the Metra and the CTA to larger parts of the Bronzeville community,” he said. “My interest is in these transportation solutions. But separately, we’re also looking at how do we generate and share excess capacity that we will have on campus with the rest of the Bronzeville grid.”

Tullman also wants to continue to develop solar generation around campus. IIT has solar panels on campus already, and Tullman said solar production will continue to grow.  “The whole Kaplan roof, which is flat — I am lobbying for deployment of additional solar panels up there.”

IIT, a private university focused on technology, has long been considered a top school for engineering, design, and science training — but it hasn’t built a new academic building in about 40 years. So why now?

One reason: money and resources are being quickly spent on a clean energy renaissance in Illinois. In 2016, the legislature passed the Future Energy Jobs Act with the goal of procuring 666 megawatts of community and distributed solar. In April, the Illinois Power Agency detailed a plan to acquire 25 percent of state energy from renewables by 2025.

These targets signal that Illinois is fertile ground for innovative startups, and Tullman wants Kaplan students to be leading these companies. IIT students will now be trained in executive-level management skills on top of the technical and engineering skills. “There’s no central venue where students come to be instructed in tomorrow skills — whether it’s iteration, problem-solving, the process of design thinking — and we want that to be Kaplan’s signature, a place where these interdisciplinary problems can also be addressed,” Tullman said.

The goal of instruction at Kaplan is to train students to innovate and to become leading entrepreneurs. “We’re not going to solve a lot of the problems that have accumulated by doing things the same way we always have,” Tullman said.

‘We’re not going to solve a lot of the problems that have accumulated by doing things the same way we always have.’

The school is pumping a lot of oxygen into its professional partnerships, a key component of new academic programming meant to train the next generation of leaders; many who will be focused on developing a cleaner and smarter energy grid.

Alumni over the past decade have left IIT earning more than graduates of comparable schools in the region like Northwestern University and Notre Dame. “But years out, they cap out because they’re not seen as executive-level talent,” Tullman said. “They’re seen as great coders, great scientists, or whatever. But if you look at the world history of business, the single most prominent sort of undergraduate degree of CEOs across the country is in engineering. We’re sort of missing out on something which means we aren’t giving our graduates the total package that lets them aspire to these executive jobs.”

The business community is already working with Kaplan students on interdisciplinary projects, which Tullman said are filling a need for long-term, off-balance sheet research and development.

Typically, research and development project managers must report quarterly to a company’s leadership team, and the pressure to make money can be a deterrent to working on big problems that aren’t easily solved. Engineering new technology will be at the heart of solving these problems — to a much greater extent than it has been in the past, he said.

Location helps too: IIT is located in Bronzeville, a neighborhood on Chicago’s Southside that is home to a burgeoning clean technology hub. Here, clean energy projects are abundant, including the first utility-scale clustered microgrid, which is being developed by IIT and ComEd, the largest utility in Illinois; and a sun-tracking “smartflower” at the Renaissance Collaborative, an affordable housing center.

“Companies don’t have an appetite for hiring people to pursue some of these things,” Tullman said. “But the projects here aren’t under such intense profit and loss pressure. I think that you’re going to see a lot of projects spawned in this environment, which is a little more hospitable to the kinds of time frames that these solutions are going to take. Every 90 days somebody isn’t saying: ‘have we struck gold yet?’”

Already, 100 graduate students are working from the Kaplan Center; the graduate design program moved in last month. Tullman said the interdisciplinary projects are beginning. The building will be fully operational in January.

Inside the Kaplan Institute

The new innovation hub at Illinois Tech promises to be a place where “students learn to be the creators, inventors, and entrepreneurs of the future.”