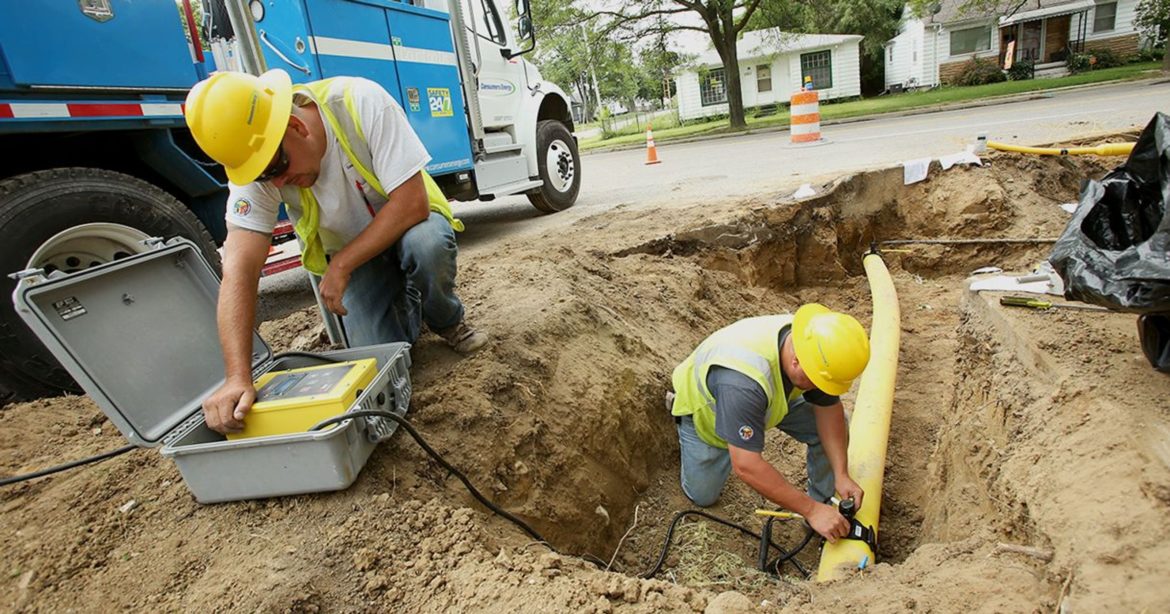 Michigan utilities are ramping up spending on replacing aging gas infrastructure that will cost billions in the coming years.

Thousands of additional miles of these decades-old bare steel and cast iron gas distribution networks are in need of upgrades, state regulators say — a time-consuming and costly endeavor for the state’s two major energy companies, DTE Energy and Consumers Energy.

Over the past five to seven years, the utilities have been ramping up spending on gas infrastructure replacement that will cost billions in the coming years, reflecting a national trend. It comes alongside the companies’ multi-billion-dollar plans to modernize the electric grid, meaning Michigan’s energy infrastructure is in the midst of a major overhaul.

“This is just an indication of the long-term infrastructure modernization that is underway but many years until it’s successfully completed,” said Michigan Public Service Commissioner Norm Saari.

He added that the gas programs “aren’t a matter of just putting in new pipes.” Significant engineering and planning go into deciding which areas to fix, while Michigan’s construction season is limited due to weather.

“The other thing is: it is expensive,” Saari said. “At approximately $1 million a mile for replacement, that’s an impact on gas rates for utilities in this state.”

A series of factors are driving the investments across the U.S., including low gas prices. However, safety and preventing leaks or explosions top the list.

Speaking on the issue at a conference in October, Saari said: “This is a significant infrastructure issue that’s out of sight but should not be out of mind.”

DTE’s replacement program started in 2011, and spending is scheduled to ramp up in the coming years, said Renee Tomina, DTE’s executive director of gas operations.

DTE still has about 35 miles of pipeline and mains in Detroit and Grand Rapids that were installed pre-1900, which represents about 0.2 percent of its 19,500-mile network.

The old lines are being replaced with new plastic-like material that are less susceptible to weather damage. The 6-inch main lines typically run below streets and sidewalks while smaller service lines reach customers’ structures, delivering gas from transmission hubs.

Consumers is in the sixth year of its “enhanced infrastructure improvement plan,” which set out to replace 2,200 miles of its 28,000-mile gas distribution network, said Charles Crews, Consumers’ vice president for gas operations. The roughly 25-year project covers 75 to 100 miles and costs about $75 million a year. Another $50 million is for services that connect directly to homes. Consumers has the largest gas network in the state.

“We wanted to take control of our investment and have more predictability in cost for customers and predictability for workers,” Crews said, adding that gas infrastructure upgrades are about half of Consumers’ $10 billion capital investment plan.

The 75-year cycle was “frankly too long for us,” Crews said. “For us to modernize our infrastructure, what were were doing pre-2012 was just insufficient.”

Port Huron-based SEMCO Energy Gas Co. began its main replacement program in 2011. Over the next two years it plans to replace about 40 miles of gas mains at about $10.5 million each year.

Driving these investments nearly 10 years ago was a combination of federal policy and declining natural gas prices.

In 2011, former U.S. Department of Transportation Secretary Ray LaHood issued a “call to action” for gas companies to ramp up their infrastructure investments a few months after deadly explosions in Pennsylvania and California.

“Utilities have always replaced pipes. This was sort of a more accelerated way of doing it,” said Jake Rubin, spokesperson for the American Gas Association.

This was also a period of declining natural gas prices, allowing utilities to increase infrastructure projects without a major impact on customers. Projects are subject to state regulatory commission approval, which must balance safety needs with rate impacts.

“If you went to a utility commission in 2007, 2008 or 2009 saying you want to add money to people’s bills to update infrastructure, it would have been a different financial atmosphere,” Rubin said.

Rubin said 42 states and Washington D.C. have accelerated pipeline replacement programs, which are prioritized based on safety risk and vary by state.

In Michigan, the main hurdles for replacement are cost, a limited construction season due to cold weather, and coordinating with municipalities on which areas to target. Excavation to replace gas lines is burdensome to residents, particularly areas that may have had recent road repairs. Utilities use modeling software to prioritize and determine which replacements are next.

“State commissions play an important role in these replacement programs by designing and approving rate structures that allow companies to make these overdue improvements, while not allowing the pipeline companies that have put off such improvement to saddle the consumers with unneeded costs and profits,” Weimer said.

The Michigan Environmental Council, which advocates on behalf of residential ratepayers at the MPSC, supports the utilities’ gas replacement programs. Additionally, the programs can help reduce methane leaks from the system.

“The reality here in Michigan and many Midwestern states is we have an incredibly old infrastructure of gas pipelines,” said Charlotte Jameson, MEC’s energy policy and legislative affairs director. “It poses a huge public safety risk.”

However, Jameson said efforts that add to Michigan’s natural gas network — including new gas plants and new lines in construction projects — are concerning from a climate change perspective. Utilities and state officials should be pushing for more electrification, she added.

“There’s a big movement around trying to electrify homes and businesses,” Jameson said. “Eventually we need to get to a place where we’re doing that in Michigan, but I think we’re 10, 20 years off from doing that.”

A deadly explosion in September near Boston renewed the industry’s focus on aging gas distribution networks. Massachusetts advocates have called on Gov. Charlie Baker to require studies on health and safety danger before new infrastructure is added.

Though most gas distribution incidents are caused by excavation damage and other outside forces, utilities say safety and preventative measures are still the key drivers of infrastructure upgrades.

“Certainly it’s a question that has made its rounds with every company in the nation,” Crews said of the Massachusetts explosion, which was caused by over-pressurization. “When it happens to one company, it happens to the industry.”

Crews said Consumers monitors for preventing medium and high-pressure from entering the system. When over-pressurization occurs, the gas is automatically vented. DTE also has a “very robust distribution integrity program” to identify risks in advance and control over-pressurization, Tomina said.

Late last month, the American Gas Association released a report on best practices to prevent over-pressurization as a result of the Massachusetts incident.

“Undoubtedly over the coming years there will be a lot more learning done from this incident,” Rubin said.

Within the past two years, Consumers and DTE have had two notable explosions along their gas distribution and transmission networks, though not due to aging infrastructure, officials say. Both occurred in metro Detroit as a result of third parties.

In DTE’s territory, a vacant home exploded in September after someone attempted to steal its furnace and left an open fuel line, Tomina said.

Data on gas distribution and transmission incidents are reported to both the Michigan Public Service Commission and the federal Pipeline and Hazardous Material Safety Administration (PHMSA).

In Michigan over the past 20 years, 118 gas distribution incidents resulting in 17 fatalities, 48 injuries and $27.5 million in damages were reported to PHMSA. Six incidents have been reported this year.

Incidents reported to the MPSC have a lower threshold than those to PHMSA, said MPSC spokesperson Nick Assendelft. MPSC requirements include anything that would be reported to PHMSA and events that cause property damage beyond $10,000, release more than 1 million cubic feet and more than 100 customers are affected.

Since 2011, Michigan has averaged 138 incidents a year (1,100 total) initially reported before being investigated further, Assendelft said.

Lubbers said SEMCO hasn’t had “significant or life-threatening” incidents due to aging infrastructure, while the number of reported leaks associated with corrosion dropped from about 500 in 2011 to about 170 in 2017.

While utilities and regulators are taking advantage of new technology and low gas prices to tackle long-term infrastructure projects, safety remains at the forefront.

“Much of this is preventative,” Saari said. “We’re encouraging them, and the federal government encourages them.”