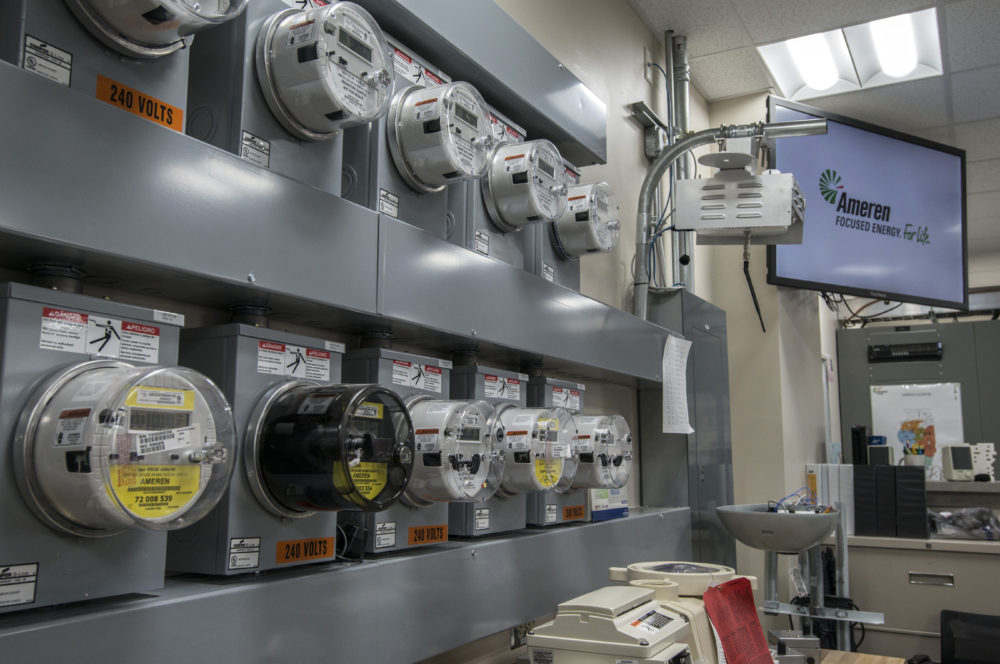 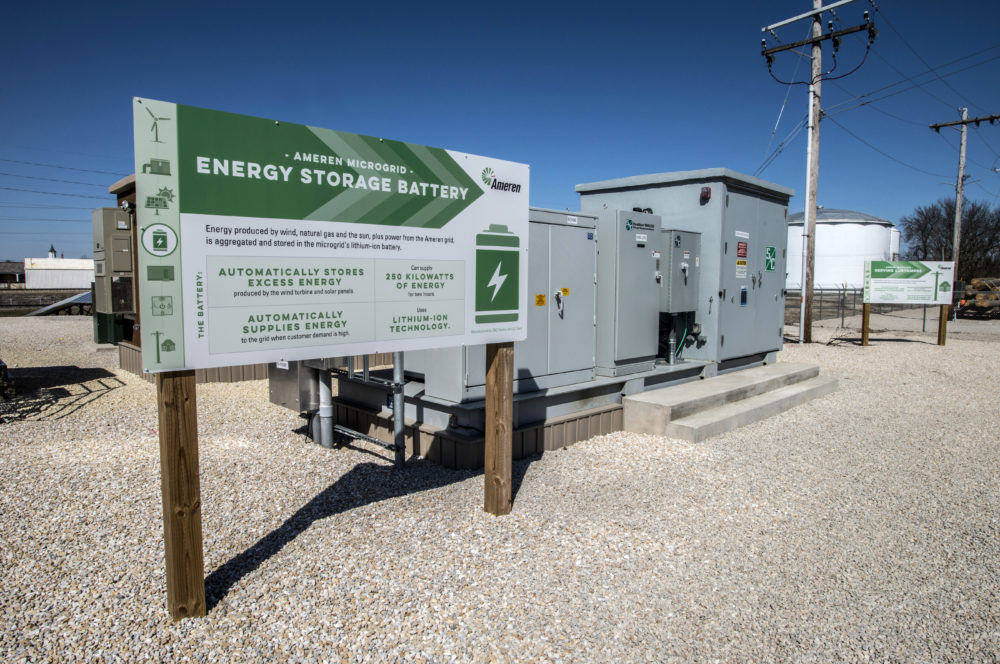 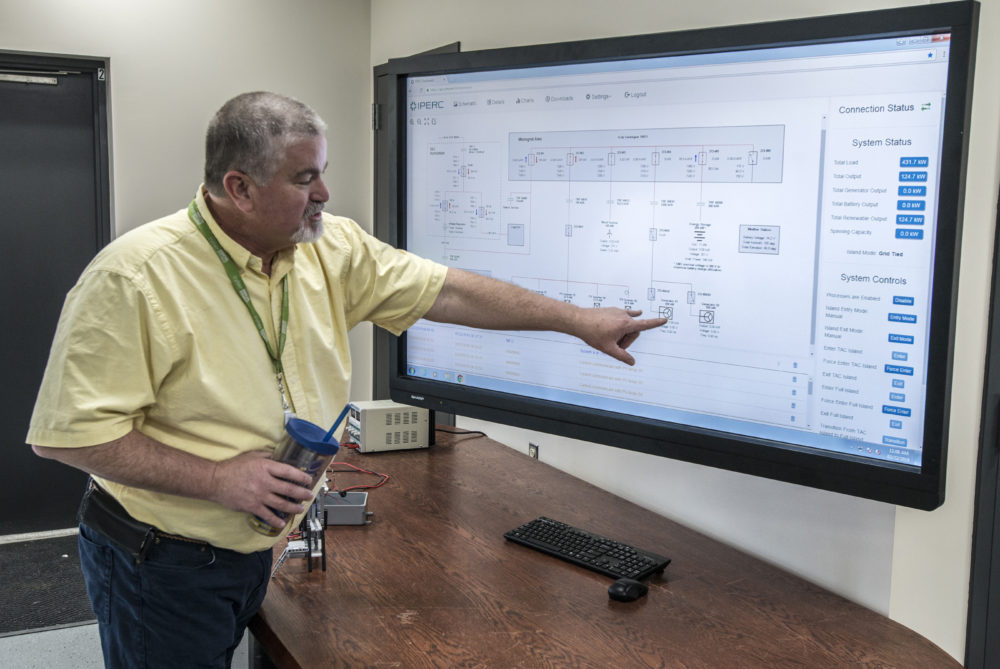 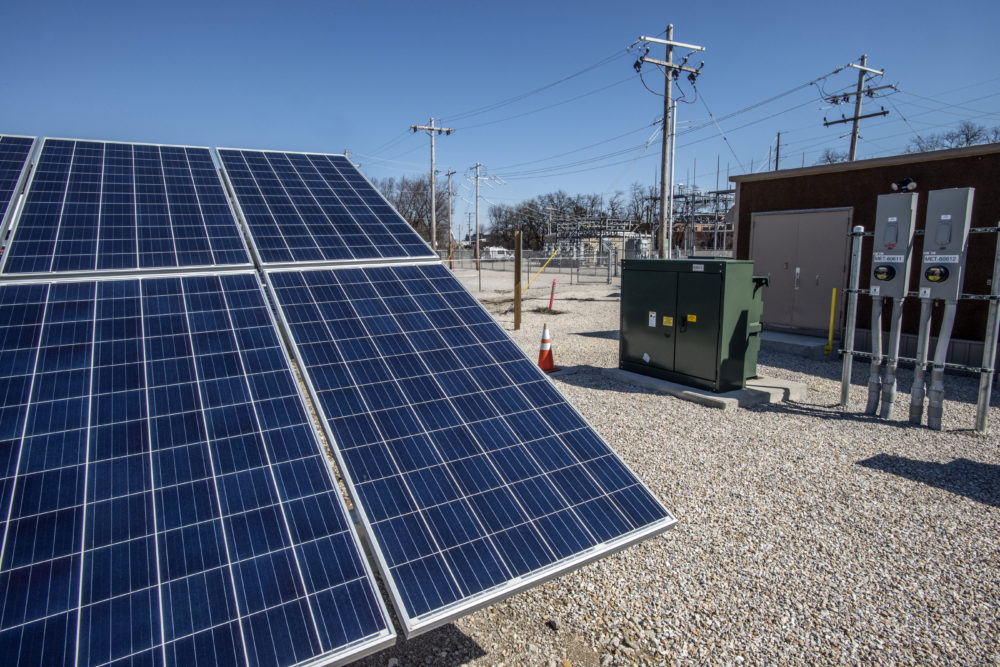 A solar panel at Ameren's 1.5-megawatt microgrid in Champaign, Illinois, one of the most advanced distributed-energy resource facilities in the country.

Microgrid advocates have long touted the systems’ potential to help customers withstand extreme weather, a selling point that’s been stronger outside the Midwest in hurricane-prone areas along the East Coast.

Climate change could be changing that, though, as the risk of disruptive storms rises in the region alongside global temperatures. The shift is gradually improving the resilience case for microgrids in the Midwest.

During the first weekend of December, 29 tornadoes ripped across Illinois, leaving thousands without power. A week before, 340,000 people in northern Illinois lost power during a punishing blizzard, which set single-day snowfall accumulation records.

What a day! Chased a storm around Beardstown and Havana and saw a total of 5 tornadoes. @NWSLincolnIL #ilwx pic.twitter.com/zX8KKl5qZp

Tornado at Beardstown as seen from north of Jacksonville with a photogenic cell immediately following that did not produce. Later scenes after the Taylorville event along IL48 looking northward towards Blue Mound #ilwx pic.twitter.com/20XzBFAmDb

“Microgrids are a way to help improve resiliency of the grid due to severe weather, whether it be from ice storms or tornadoes,” said Chris Evanich, S&C Electric Companies manager of microgrid business development. “Any event really that causes such a major outage — that’s not something that’s going to take a couple seconds or even minutes to repair, but hours, days, sometimes weeks.”

S&C Electric Company, an electric power systems company based in Chicago, has built microgrids across the region, including a utility-scale microgrid at Ameren’s Technology Application Center in Champaign near where several of the tornadoes formed. “For us with the tornadoes, the one that was closest was the Ameren microgrid,” Evanich said. “But Chicago’s western suburbs were hit pretty hard.”

Ameren said the microgrid did fine — the tornadoes weren’t close enough to Champaign to create any problems — but the town of Taylorville, about 70 miles to the southwest, saw more than 20 people injured, 100 power poles destroyed, and damage to 500 buildings. Gov. Bruce Rauner declared it a disaster area, and thousands of people in the area lost power.

Rows of powerlines down on top of houses in Taylorville, IL tornado. #cILwx pic.twitter.com/0F1IJInbwd

Evanich said the freak early winter weather reminded him of a similar situation of ice storms and tornadoes that the company faced in Ontario, with the town of North Bay. “They’ve had major ice storms over the last decade and in 2014, they had significant tornadoes that knocked out power to the community and it took them a week to get back online,” he said.

In response to the outages, the North Bay Hydro Services decided to build a resiliency hub in the center of the community, which will be powered by a microgrid outfitted with solar panels, battery energy storage, and a co-generator. The generated energy will provide heat and power to a park, a large gym, and the YMCA, Evanich said, and it will be a community shelter in case of future weather emergencies that knock out power to the broader community.

This kind of disruptive weather with greater precipitation will be increasingly common in Illinois as climate change pushes weather to the extremes all over the Midwest, according to the recently released Fourth National Climate Assessment.

Related: How batteries could replace the need for some backup transmission lines

How can microgrids help? If there is an outage, a microgrid can island from the larger grid, keeping power flowing from onsite generation. Some advanced microgrids use software to ensure that any critical buildings — a hospital, for example — remain online while less important buildings do not; while others, like Ameren’s in Champaign, can rely on renewable energy from wind, solar, battery storage, or others forms of generation.

Microgrids should be considered anytime you are looking to build resilience into the grid, according to Ryan Katofsky, vice president of industry analysis at Advanced Energy Economy, a clean energy business group.

“During Hurricane Sandy, there were some great examples of hospital campuses, university campuses, even housing complexes that had their own microgrids, mostly in the form of combined heat and power plants,” Katofsky said. “The microgrids are normally operating in parallel to the larger grid. They’re providing electricity, heating, and cooling but they can island and disconnect and continue to operate. There were several examples where they islanded and those microgrids ran for days. I think you take the same the same approach anywhere that you want more resiliency.”