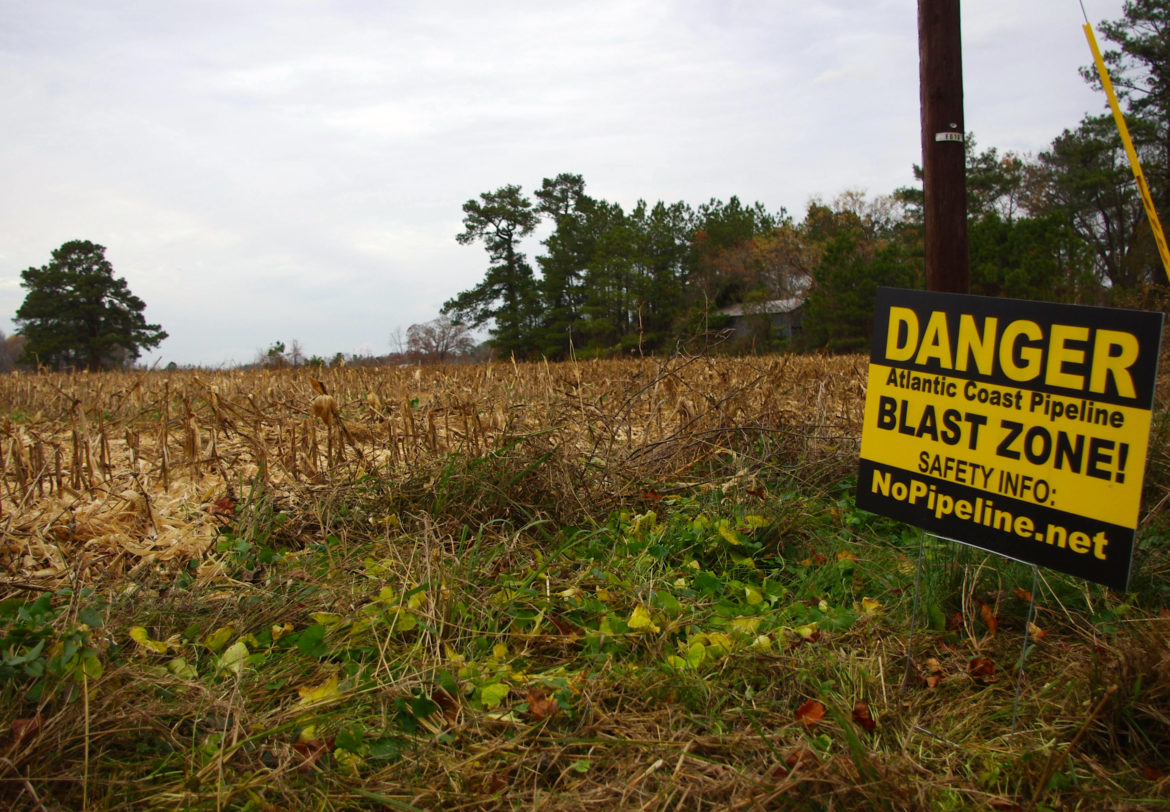 An anti-pipeline sign on property in the path of the Atlantic Coast Pipeline in North Carolina.

Dominion Energy has lashed out at environmental advocacy organizations for linking its controversial Atlantic Coast Pipeline to an order from state regulators that Virginia’s largest utility redo its long-term energy plan.

Spokespeople from Dominion told reporters in an e-mail distributed Tuesday evening that both the Sierra Club and the Southern Environmental Law Center (SELC) “took a footnote from the State Corporation Commission’s (SCC) order out of context, distorting facts to confuse and misinform the public.”

The footnote in question, No. 14, does not mention the pipeline. It directs Dominion to correct its 2018 Integrated Resource Plan by including “a reasonable estimate of fuel transportation costs … associated with all natural gas generation facilities.”

On Friday, commissioners told Dominion it had 90 days to “re-run and re-file” the corrected results of its plan.

Dominion’s 231-page plan, submitted to the commission in May, covered details such as customer base and power-supply build-out from 2019 to 2033. Commissioners said that version was neither reasonable nor in the public interest.

The commission’s order made no factual findings with regard to the Atlantic Coast Pipeline, Dominion’s statement to reporters said.

“Instead of supporting Dominion Energy and policymaker’s (sic) push for carbon-free generation, [the Sierra Club and SELC] are distorting the SCC’s official order to pander to their donor base without regard for the truth,” the statement said.

Dominion spokesman David Botkins responded to a request for further comment on Wednesday by saying, “We think the statement speaks for itself.”

SELC staff attorney Will Cleveland, who was quoted in the Energy News Network’s article published Monday, agreed that the footnote on page 5 of the SCC’s 10-page decision does not mention the pipeline.

He also said the footnote had nothing to do with his comments to news organizations connecting the natural gas pipeline to Dominion’s plan being rejected.

“You could take footnote 14 out of the order and I would have said the exact same thing,” he said in a Wednesday interview.

The big picture, Cleveland explained, is that Dominion has claimed that it needs the Atlantic Coast Pipeline as part of the infrastructure required to generate enough electricity for its customer base. And now that the commission has thrown out Dominion’s plan and its electricity load forecasts, “how credible is their claim that they need the pipeline for power generation?”

Dominion has temporarily halted construction on the pipeline because of a court order. If completed, it would bisect Virginia on its 600-mile path from West Virginia to North Carolina.

The utility has vowed to make the required commission-ordered changes by the deadline.

“We are in uncharted territory,” Cleveland said. “The SCC has never thrown out an IRP. All of us are wondering how this will shake out.”