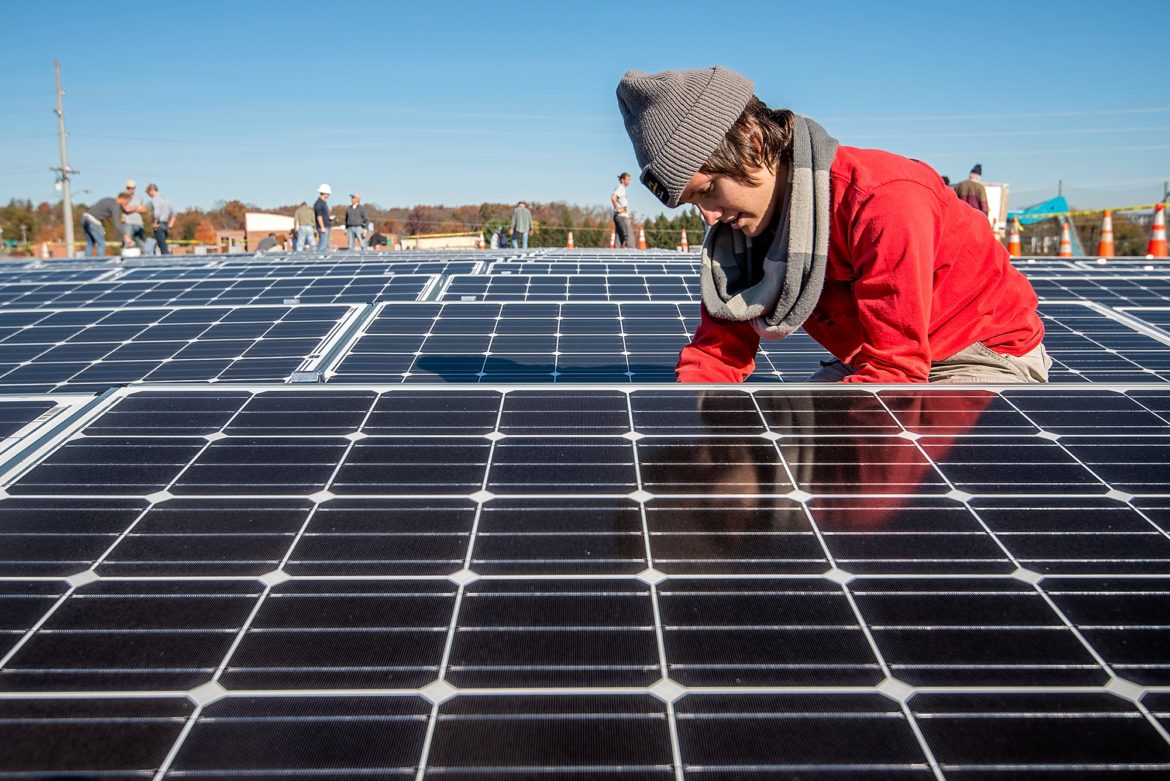 An effort to remove legal barriers to landfill solar projects is gaining support ahead of the 2019 legislative session.

Turning dormant landfills into solar farms appeals to planners and developers because such “recycling” adds value to otherwise undesirable space.

In Virginia, though, state law limits solar arrays to serving contiguous properties. That puts landfill solar out of reach for any customers not located next door.

Fairfax County officials in northern Virginia have their fingers crossed that the Virginia Legislature will knock down that and other barriers to landfill solar in its next session, which begins in early January.

“Maybe this is the year we get something done,” said Jeffrey McKay, D-Lee, a Fairfax County Board supervisor. “We can at least start with giving local governments flexibility. I don’t think most people understand the shackles that the state has put on localities trying to use solar for the public’s benefit.”

For years, legal hurdles have stymied Fairfax County’s effort to provide green power to its municipal facilities by adding a solar farm to a long-closed landfill.

The concept has long had the support of environmental organizations, but now it also has backing from the influential Virginia Association of Counties, and perhaps even the state’s dominant utility, Dominion Energy. In a November report, the energy behemoth stated that landfills and other brownfields would have to be folded into the land mix to meet ever-growing proposals for utility-scale solar projects. 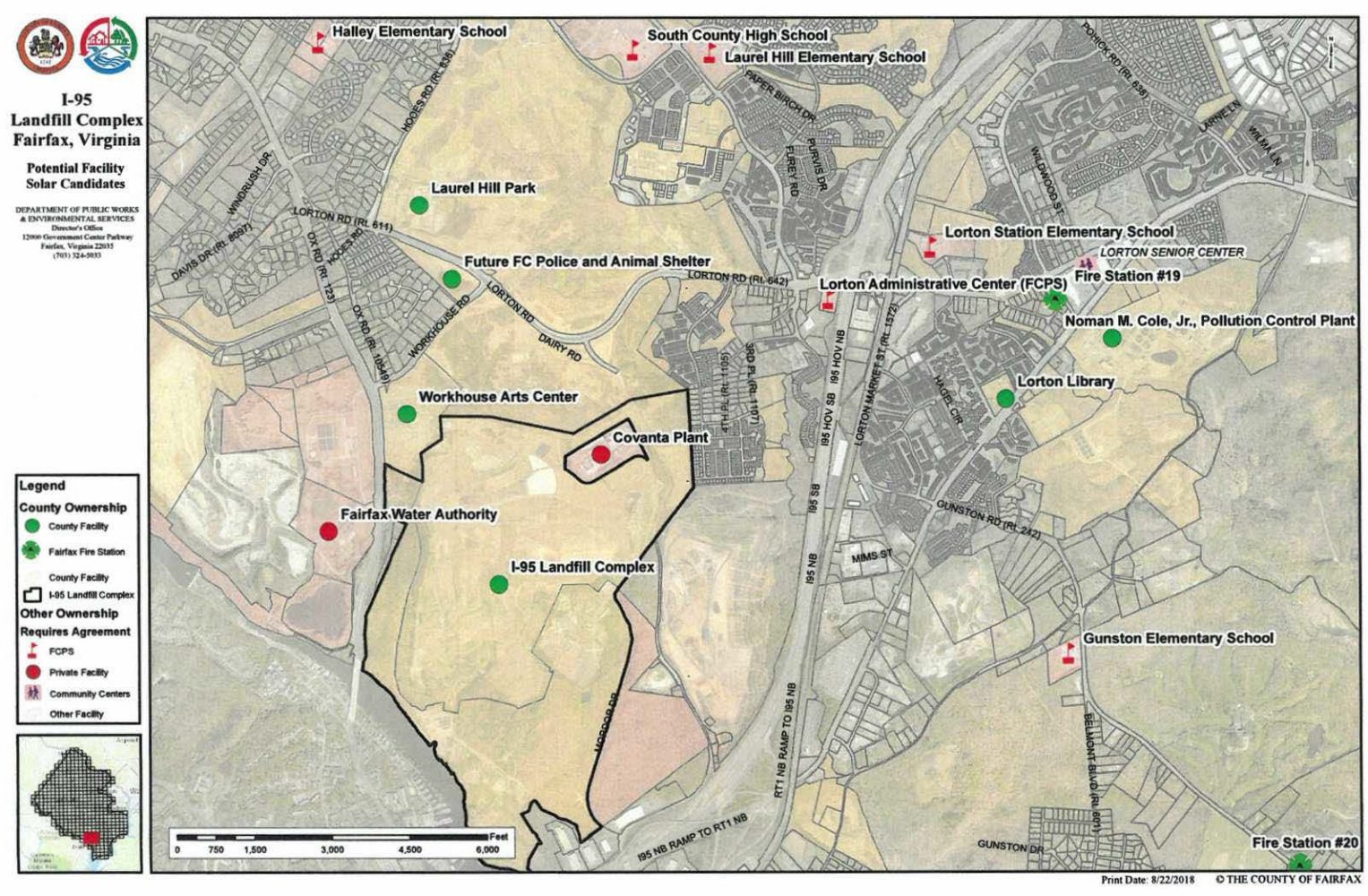 Fairfax County’s goal is to build at least five megawatts of solar on the part of the 300-acre Interstate 95 landfill complex that was closed in 1992.

Officials envision providing electricity for a suite of county buildings, including a government center, library, community center, and police and fire stations. Those facilities are on the opposite side of I-95, however, and connecting them to power generated at the landfill is currently prohibited.

Other barriers include a cap on the size of arrays built under power purchase agreements and the lack of so-called virtual net metering. That practice allows the energy generated at one site — in this case, a landfill — to be credited to energy used by that same owner at another site at the same retail rate.

“We’ve looked at going forward with this project numerous times,” said James Patteson, director of the county’s Department of Public Works. “But it’s the legislation as it stands that kind of kills the economics of it.

“Rooftop solar can only get us so far. We want to remove barriers so we can do the right thing with ground-mounted solar.”

‘Rooftop solar can only get us so far. We want to remove barriers so we can do the right thing with ground-mounted solar.’

Updating the laws would allow the county to serve customers on non-contiguous land, receive a fair price for the power it generates at the landfill, and sign a power purchase agreement with an array-building partner.

Such agreements are crucial to making the investment economical, Patteson said. It would allow for a larger array, as well as access to federal tax credits and private capital.

“We’re a case study,” Patteson said. “The potential across the state is huge.”

Brownfields for solar is common ground

Advocacy organizations such as the Sierra Club fully support Virginia’s recent solar surge. But the club’s Virginia Chapter wants to update outdated state laws by helping to shepherd a solar-siting policy into existence.

One priority would be cutting red tape so large expanses such as idle landfills, brownfields, former mine lands, and other commercial sites could be creatively covered with solar farms. They also want more rooftops and parking garages to be part of that mix.

“Removing legal hurdles and barriers frees up this other less desirable land to move the renewable energy revolution along,” said Corrina Beall, the chapter’s legislative and political director. “These kinds of parcels should be used before pristine forestlands or farmlands are developed. The idea is to maximize the benefits of solar by minimizing the environmental impact.”

Solar on brownfields is where environmental organizations share common ground with Dominion.

The utility laid out impediments to solar siting as part of a Nov. 1 report filed with Gov. Ralph Northam, state utility regulators, and the leaders of the state House and Senate Committees on Commerce and Labor.

Utilities were required to release a solar update as part of the state’s sweeping Grid Transformation and Security Act, which took effect on July 1. The measure declares utilities’ investments in 5,000 MW of renewable energy over the next decade to be in the public interest.

Siting utility-scale solar, projects at or above 5 megawatts, will become tougher if farmland and forests are the only options, the report states. Each megawatt needs eight to 10 open acres, meaning a 20-megawatt project requires 160 to 200 acres.

“And, it can’t be just any land,” the report states. “Generally, usable land should not exceed 8 percent slope, and it should require only minimal grading. Further, there needs to be good road and highway access to the site, with minimal additional road building required.”

Dominion emphasizes that conflict with communities is likely to grow as it seeks more solar capacity.

“Solar farms are beginning to face many of the objections and concerns long encountered by more traditional forms of energy production and transportation,” the report notes. 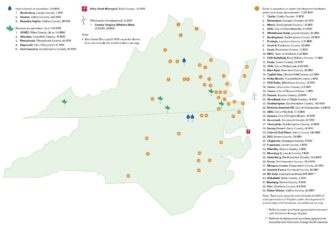 Orange dots show Dominion Energy solar projects in operation or under development in Virginia and North Carolina. (click to enlarge)

In 2015, Dominion’s entire solar portfolio consisted of four projects producing 1 megawatt in Virginia. That has expanded to 824 MW operational or under development from 30-plus solar facilities, according to the report.

Plus, the company’s recent Integrated Resource Plan projects that it could add 4,720 MW (1.18 million homes) of additional solar capacity by 2033 and another 7,200 MW (1.8 million homes) by 2043. Last week, state utility regulators ruled the entire plan to be insufficient and ordered Dominion to submit a new version within 90 days.

Rooftops and brownfields could be a significant part of making that volume of solar realistic, the report states, but it didn’t spell out any particulars.

“These are the kinds of locations that should receive more attention going forward,” the report states. “This will be a major conversation in the years ahead.”

An incubator for the entire state

What happens with utility-scale solar in Fairfax County is significant because it is home to so many data centers and other large electricity users who are pleading for access to renewable energy. It’s also next door to Arlington, the Virginia county recently selected as one of two locations for Amazon’s second headquarters, nicknamed HQ2.

Fairfax County officials have been at the forefront of using their properties to showcase the region’s commitment to environmentally friendly technology. For instance, the landfill complex where solar is planned already hosts a methane gas-to-energy plant.

McKay, the county supervisor, said the landfill solar project should be a welcome green addition.

“Why wouldn’t legislators want to save money, set an example and do the right environmental thing for the taxpayers we represent together?” he asked rhetorically. “Local governments are a good incubator for testing these things.”