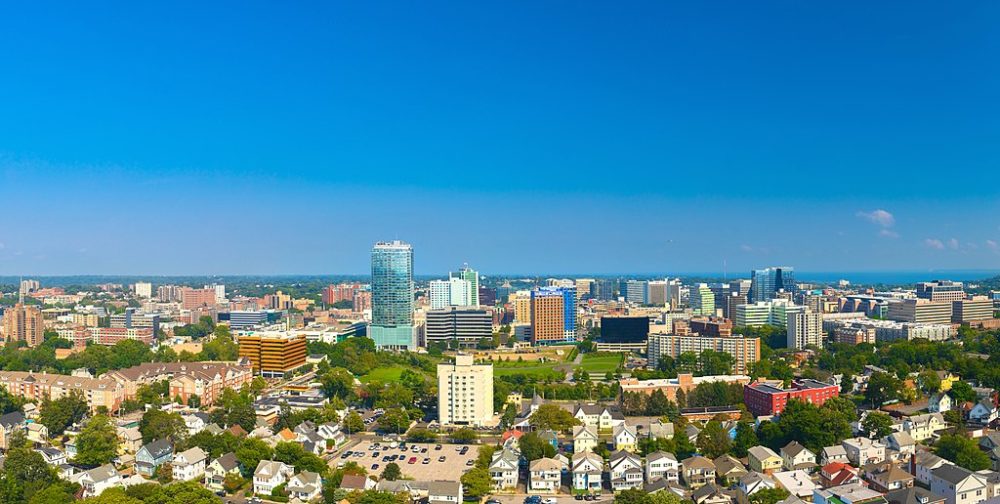 The Stamford 2030 District has had success with large properties, but small buildings offer new challenges.

A commercial building efficiency program in Connecticut is turning its focus to smaller buildings, hoping to build on its progress with larger properties.

For nearly five years, the Stamford 2030 District has worked to reduce energy use, water consumption, and transportation emissions in the city of Stamford by 50 percent by 2030. Like many of the state’s cities, Stamford has grappled with how to sustainably and efficiently develop as new companies flock to the burgeoning business hub.

Poor energy performance is not unique to Stamford; the whole state is grappling with energy efficiency. Connecticut continues to have some of the highest energy costs in the country. Though Connecticut has made progress over the last two decades — primarily through its Conservation and Load Management energy efficiency program — it now risks falling behind other states in New England. According to the Acadia Center, a nonprofit advocating for a clean energy future, Connecticut invests in cost-effective electric efficiency at “roughly half the levels pursued in Massachusetts and Rhode Island.”

To address this growing need, the Business Council of Fairfield County, in partnership with Connecticut Fund for the Environment, proposed in October 2014 that Stamford join the 2030 District movement, making it the sixth in the nation.

The 2030 District model is the brainchild of Architecture 2030, a nonprofit focused on reducing greenhouse gas emissions from buildings. Today, there are 20 districts across the United States and Canada — including Seattle, Philadelphia, and Toronto — with more than 990 organizations and 1600 buildings committed to the challenge.

For the 2030 District to be successful, buy-in from the private sector was critical. Don Strait, the former executive director of CT Fund for the Environment, wasn’t sure how motivated businesses would be to join the effort. The city didn’t require companies to report energy use as in other 2030 cities like Seattle. “In the absence of benchmark reporting laws, what is the motivation for companies to join us and do the work in Stamford?” he said.

Turns out, that wasn’t a problem. Emily Gordon, the district’s program manager, said it now includes more than 40 members and 100 buildings. The Stamford 2030 District is comprised of Stamford business leaders, property owners, and community partners, like First County Bank, Stamford Hospital, and Starwood Hotels and Resort. In total, it covers more than 12 million square feet and continues to grow.

The Stamford 2030 District provides members with free benchmarking services and other resources that allow them to record energy and water use; that data is then shared with the district.

“Most buildings don’t know where to start or who to trust,” Gordon said.

Aging building stock was and continues to be a challenge. Old infrastructure means unnecessary energy consumption, more expensive energy systems, and increased emissions, as well as vulnerability to rising sea levels. “Technology and code standards were very different 20 years ago, or 50 years ago,” Gordon said.

Once members have a good grasp on their energy use, the district coordinates a walk-through of their buildings so they’re aware of the opportunities for improvement. They also connect them with potential service providers for those improvements, whether it’s replacing boilers or upgrading an HVAC system.

The district has also facilitated peer-to-peer communication. That includes everything from touring each other’s properties to sharing best practices. “It’s especially important to provide them with new opportunities they haven’t thought of but within the realm of possibility,” Gordon said. “Expanding their thinking of how they can solve problems within their own buildings.”

After its first year, the district’s members performed about 24 percent more efficiently than the national median. Its latest annual report, from 2016, shows the district overall performing 7 percent better than the baseline, with its member buildings performing 21 percent better. According to Gordon, they’re still reviewing the data over the last three years, but so far the district has shown a notable decrease in aggregated energy usage year over year.

Starting out, the Stamford 2030 District primarily engaged building owners and managers of large commercial properties in Stamford. “Since larger building owners tend to have larger costs associated with energy use, they have typically been more incentivized to improve the efficiency of their buildings,” Gordon said.

This past year, the Stamford 2030 District expanded to include the entire city of Stamford, not just its city center and the immediate surrounding area. They also made a decision to focus on small-to-medium buildings in the range of 40 to 150 square feet.

“A lot of them don’t know the path,” Gordon said.

Smaller buildings provide tremendous opportunity and overwhelming workload, according to Gordon. Owners often require more information about opportunities. They also don’t have the same level of staffing as their larger peers.

“While it is rare that we meet with building owners and managers who disagree that energy efficiency and reliability are priorities, lack of staff and resources is a continuous challenge,” Gordon said. Many cities’ efficiency programs struggle to gain traction with smaller buildings. The Stamford 2030 District hopes to work around that by continuing to assist building owners one-on-one and providing them with resources, while also keeping their larger goals in focus.

So far, they’re having the most success with owners who are familiar with their work and other initiatives of the Business Council of Fairfield County. The district has already benchmarked energy use of about 1 million square feet of small buildings — the first time energy usage in these buildings had been evaluated.

An introduction to 2030 Districts

“Across the United States, 2030 Districts are being formed to meet the energy, water and vehicle emissions targets called for by Architecture 2030 in the 2030 Challenge for Planning.

“Through unique public/private partnerships, property owners and managers are coming together with local governments, businesses, and community stakeholders to provide a business model for urban sustainability through collaboration, leveraged financing, and shared resources. Together, they are developing and implementing creative strategies, best practices, and verification methods for measuring progress towards a common goal.”