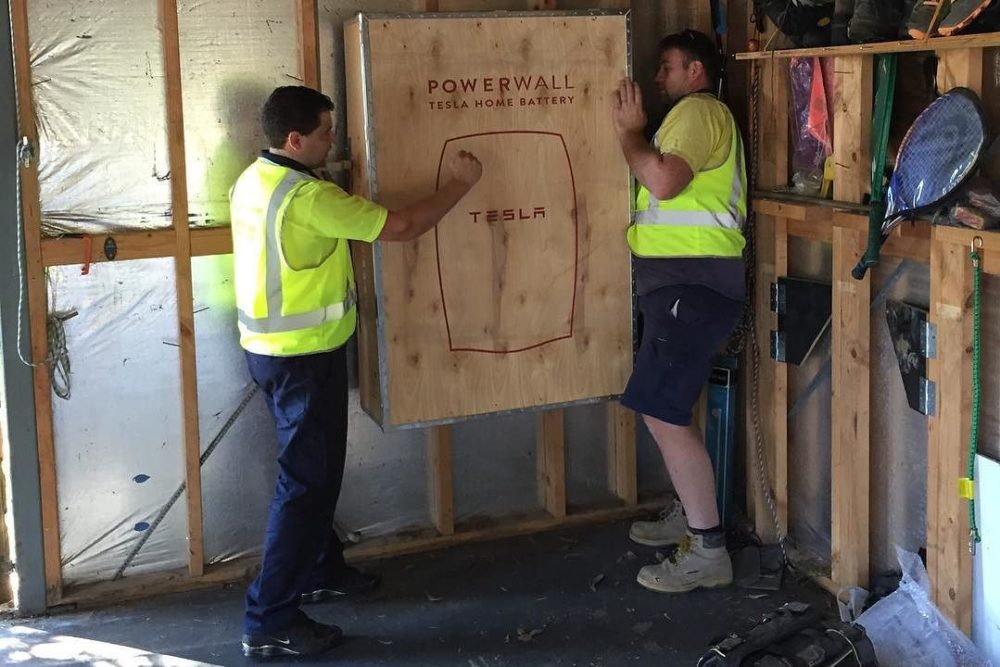 In this file photo, a crew installs a Tesla Powerwall battery.

Liberty Utilities’ proposed program would include a “bring your own device” option for customers during its second phase.

Liberty Utilities, which serves about 285,000 electric customers in New Hampshire and California, plans to recruit participants for phase one of the program by early 2019, pending final approval from utility regulators.

The company will install 200 Tesla Powerwall batteries and then have 12 months to show it can accurately manage the system to reduce its peak loads at no added cost to customers. The program would be the first of its kind in the U.S. to use a three-tiered time-of-use rate structure.

After that, a second phase would add another 300 participants with a “bring your own device” option that has drawn the interest of energy storage companies, some of which had hoped to be involved in the program sooner.

“We’re pleased that Liberty came forward with what we see as an innovative proposal that will incorporate both energy storage and time-of-use rates,” said Madeleine Mineau, executive director of New Hampshire Sustainable Energy Association. “We think storage is important in grid integration and for greater deployment of distributed energy resources.”

Reducing peak load has been a priority for New England’s utilities for several years. New Hampshire has the fourth-highest retail electricity rates in the continental U.S., with other New England states holding the top three spots. And according to data from ISO New England, peak wholesale electricity prices in New Hampshire can be up to 50 percent higher than off-peak.

‘We think storage is important in grid integration and for greater deployment of distributed energy resources.’

Liberty Utilities reached an agreement with state regulatory staff, the city of Lebanon, consumer advocates and environmental stakeholders in November after about a year of negotiations. The settlement is awaiting final approval by the state’s Public Utilities Commission, where a date has not been set.

The pilot program would use time-of-use rates in three classes: mid-peak, critical-peak and off-peak. The batteries would be charged overnight during off-peak times, and that power will be used in the daytime during critical-peak periods. Off-peak is expected to be more than 10 cents lower per kilowatt-hour during the summer months compared to regular residential rates.

Customers would pay $2,433 per system upfront to participate in the 10-year program, or spend $25 per battery per month, with each customer required to use two batteries. The installation, service and maintenance will be covered by the utility. Liberty expects to complete customer signups in the first quarter of 2019.

Customers would be able to use the batteries as they choose, except when Liberty anticipates a peak event and gives 24-hour notice. The utility would then charge the batteries overnight and discharge them the next day to reduce the amount of power it needs from grid operator ISO New England.

Liberty has to show that it is accurately dispatching the battery power during periods of peak demand at least 75 percent of the time before it can begin phase two. A cost-benefit analysis must also show that cost savings match projections.

“Some of the key metrics for success include the transmission cost savings for customers and increased customer engagement in energy usage,” said Heather Tebbetts, senior rates and regulatory affairs analyst for Liberty. “We expect that initial performance metrics from the pilot will be available after year one of the pilot, and the metrics are expected to be reviewed annually.”

After phase one is deemed to be successful, the next phase would expand to work in parallel with aggregators of third-party-owned storage batteries.

Companies like Sunrun and ReVision Energy wanted third-party storage providers to have a chance to participate earlier and get time-of-use rates for their customers. While the companies did not sign on to last month’s settlement, they also did not oppose it and endorsed many of its key components.

“Working with a small utility in a small state, we thought we could work with these stakeholders to get this program right,” said Chris Rauscher, director of policy and storage market strategy at solar and storage developer Sunrun.

The proposed settlement creates a working group to propose stakeholder meetings and analysis that will run concurrent to the implementation of phase one.

“The ownership model is something Liberty got backwards. We think the program should’ve started with third-party ownership first because you’re not outlaying any ratepayer capital,” Rauscher said.

Competitive solicitations will seek battery aggregators to provide an additional 2.5 megawatts of battery capacity, which is equivalent to approximately 500 batteries.

“We had concerns about utility ownership of the batteries, but we’re pleased about BYOD, though we thought it could’ve been a little more robust or come a little earlier,” Mineau said. “It’s going to take a good amount of education, about not only for energy storage, but in time-of-use rates to incentivize a change in customer behavior.”

Tebbetts said that Liberty proposed the program to reduce peak demand and offer customers a chance to get directly involved in energy management. The utility benefits indirectly, even for those not participating in the pilot, from lower peak demand, which improves system operations and reduces expensive wholesale power purchases.

Liberty is putting together a plan for customer engagement, outreach and education, and final details were not yet available.