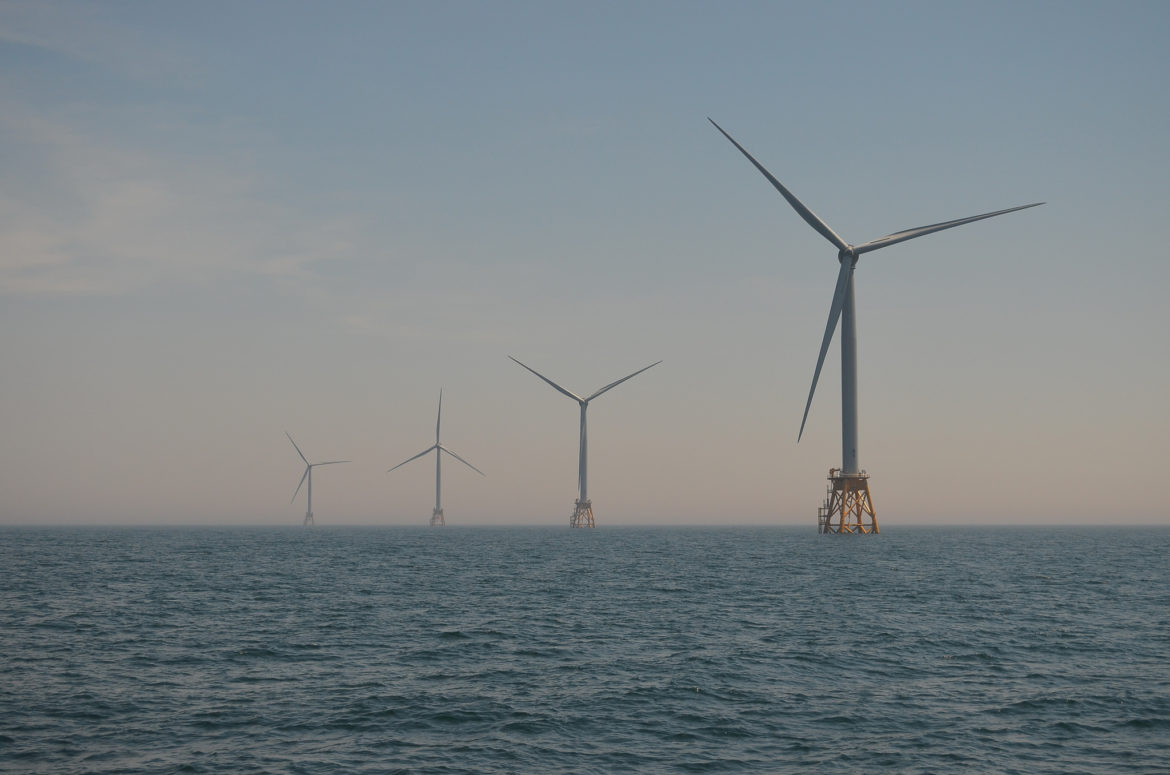 As president of the Southeastern Wind Coalition, she also fully understands why the endorsement was granted so begrudgingly. Virginia’s State Corporation Commission in its approval blasted the 12-megawatt, $300 million experiment as too risky and pricey for ratepayers.

“The SCC’s hesitant approval makes sense because this is not the cheapest way to generate 12 megawatts of electricity,” Kollins said. “And it’s not intended to be. This is a demonstration project that will make a larger deployment off the Virginia coast cost-competitive.”

Dominion Energy, the state’s biggest utility, has partnered with Orsted, a Danish company that purchased Rhode Island-based Deepwater Wind in October, to build test turbines 27 miles off the coast of Virginia Beach.

What’s called the Coastal Virginia Offshore Wind project — a pair of 6-megawatt turbines — is scheduled to be operating by December 2020 on 2,135 marine acres leased by the state. Orsted recently selected Siemens Gamesa to supply the turbine blades.

‘… This is not the cheapest way to generate 12 megawatts of electricity. And it’s not intended to be.’

The project is a laboratory of sorts for 112,800 nearby acres that Dominion has leased from the federal Bureau of Ocean Energy Management.

The Sierra Club and other Virginia wind advocates view that expanse as prime waters for at least 2,000 MW of wind they want developed over the next decade. Dominion has said a larger project could be operating as early as 2024.

“Things have to start somewhere,” said Dominion spokesman David Botkins, defending the utility’s small-to-large approach. He said Dominion has a “good plan in place” and linked with Orsted because company experts “know what they are doing.”

Orsted, the world’s wind leader, expects to expand its offshore capacity to 7.45 gigawatts by 2020.

In issuing its backhanded OK of Dominion’s prudency petition for the pilot wind project, commissioners placed blame squarely on the shoulders of the Virginia Legislature.

The Coastal Virginia Offshore Wind project “would not be deemed prudent as that term has been applied by this Commission in its long history of utility regulation or under any common application of the term,” the SCC wrote in its 20-page order on Nov. 2.

However, commissioners stated that those factual findings no longer mattered because of recent changes to state law.

“Unlike prior generating facility cases, the Commission’s standard analysis of prudency as a purely factual matter must be subordinated in large measure to the public policy established by the General Assembly,” they wrote.

Commissioners were referring to the landmark Grid Transformation and Security Act. It declares 5,000 megawatts of solar and wind energy to be in the public interest and recognizes the offshore wind project as part of that transformation.

Under the law, which took effect July 1, Dominion can direct excess earnings to renewable energy investments.

That law isn’t the only commitment to renewables. An energy plan released in October by the Department of Mines, Minerals and Energy recommends that Gov. Ralph Northam commit to 2,000 MW of offshore wind by 2028. It also calls for the state to create an Office of Offshore Wind.

The same report predicts that more than 14,000 jobs can be created in the offshore wind manufacturing, installation, service and supply industries as the demand for renewable energy increases in Virginia.

Wind experts close to the Coastal Virginia Offshore Wind project pointed out that it was unfair for the SCC to directly compare the pilot’s price per kilowatt hour to existing utility rates or to larger offshore wind farms in the Northeast.

For instance, commissioners said they discovered CVOW wind would cost nine times as much as an 800-megawatt offshore wind project developed by Vineyard Wind in coastal Massachusetts.

“This is an apples-to-oranges comparison,” said Liz Burdock, president and CEO of the Business Network for Offshore Wind.

“It’s important to understand the context here,” said Framme, a Virginia-based government relations and communications manager. “A least-cost project would be a combined-cycle natural gas plant or solar. That was never the idea with this smaller project.”

‘The SCC is not used to demonstration projects. Offshore wind is not in their wheelhouse. Even solar is new in Virginia.’

The Coastal Virginia Offshore Wind project is a test to confirm that offshore wind is the right fit for Virginia, a market with low electricity rates, less robust resources than the Northeast and a brief history with renewable energy, they said.

Commissioners made their skepticism clear when they wrote: “The economic benefits specific to CVOW are speculative, whereas the risks and excessive costs are definite and will be borne by Dominion’s customers.”

Beyond that, the SCC also criticized Dominion for neither conducting a competitive bidding process for the demonstration project nor seeking a purchase power agreement. In general, a developer signing such an agreement absorbs much, if not all, of the risk.

Framme countered those criticisms, explaining that Dominion put out two competitive requests for proposals in 2015-2016, but rejected bids received because they came in over $300 million, with no cap on costs.

A cost cap is now in place. To recover costs beyond $300 million on the offshore wind project, Dominion must receive a separate approval from regulators.

CVOW supporters agree that investing in a pilot project with a higher per-kilowatt-hour cost but lower overall capital expenditures could lead to more rapid development of larger, less expensive offshore wind farms in the Southeast.

Indeed, costs have dropped significantly over the last several years mainly due to the scaling up of the industry in Europe and better management of project development risk.

Kollins, who has led the wind coalition for three of its six years, said the cost of projects on this side of the Atlantic is greatly dependent on the supply chain expanding from Europe.

Virginia’s journey to putting steel in the water has been an education for all, noted Kollins, based in Chapel Hill, N.C.

“The SCC is not used to demonstration projects,” she said. “Offshore wind is not in their wheelhouse. Even solar is new in Virginia.”

It’s a tribute to the diligence of non-governmental organizations, the governor, legislators and universities that renewables have a foothold in Virginia, she continued.

“People have continued to make their voices heard. When people are passionate about something and they continue to support an issue, it can create change.”