Photo By
Michael McCluskey / for the Energy News Network 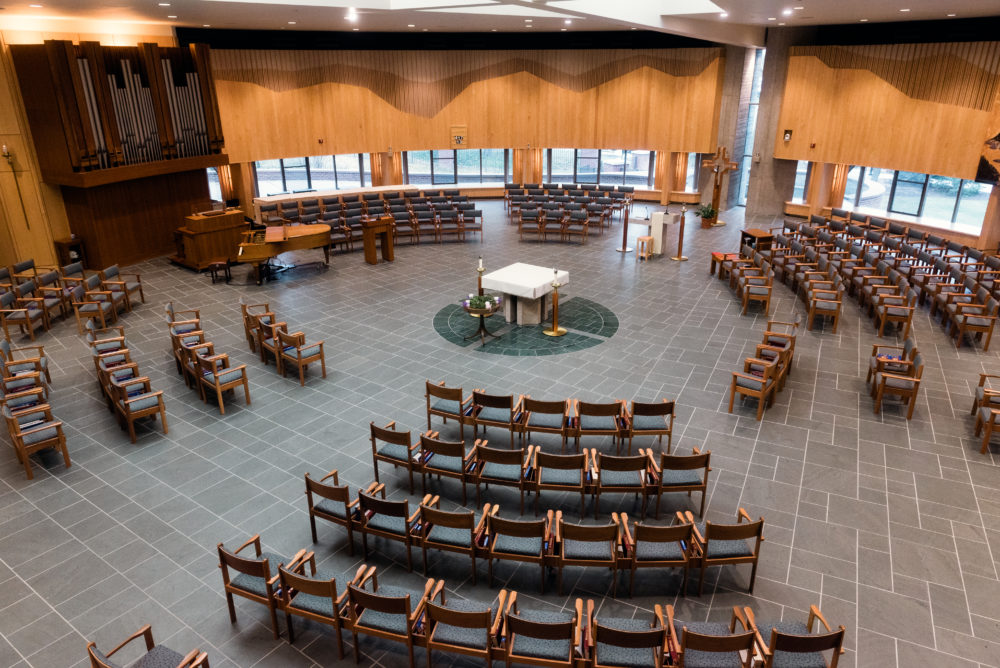 The Adrian Dominican Sisters' campus in southeastern Michigan. The congregation has invested tens of thousands of dollars in clean energy equipment to reduce energy usage. 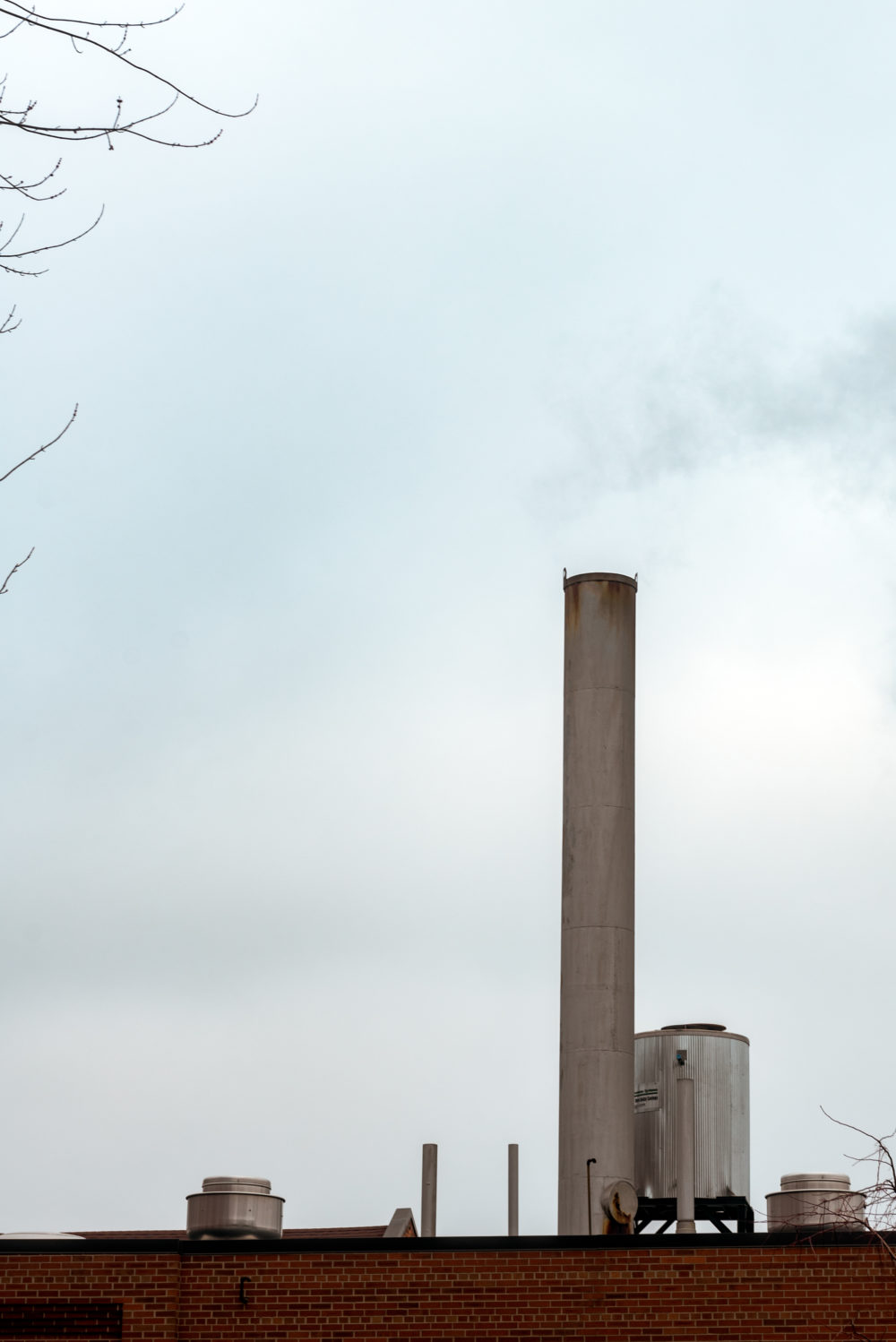 An exhaust gas stack economizer was installed at the Adrian Dominican Sisters’ campus earlier this year to capture excess heat from boilers and heat water and then campus buildings. 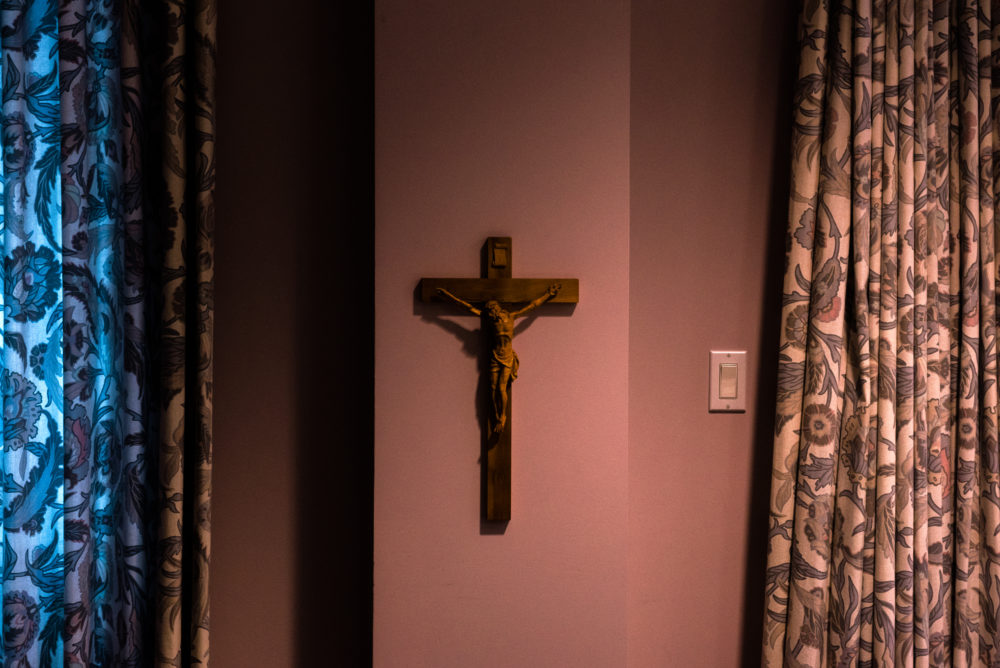 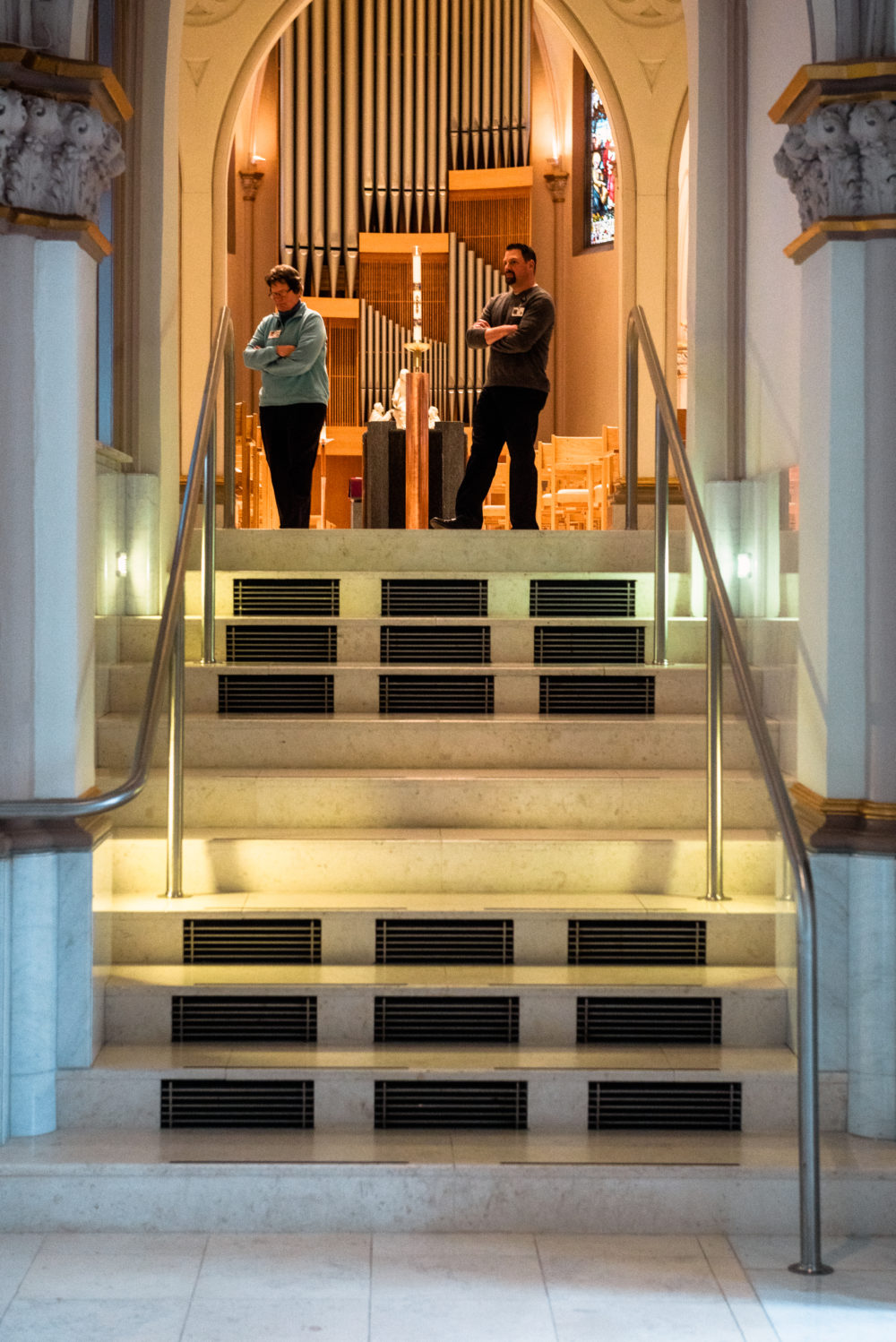 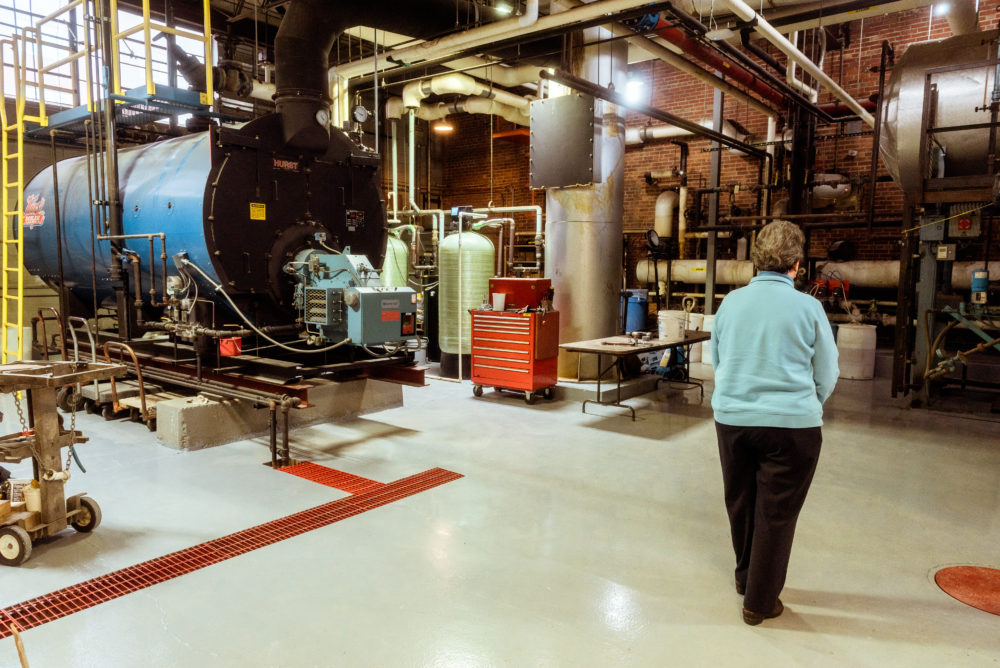 Sister Corinne Sanders inside the boiler room at the Adrian Dominican Sisters' campus. 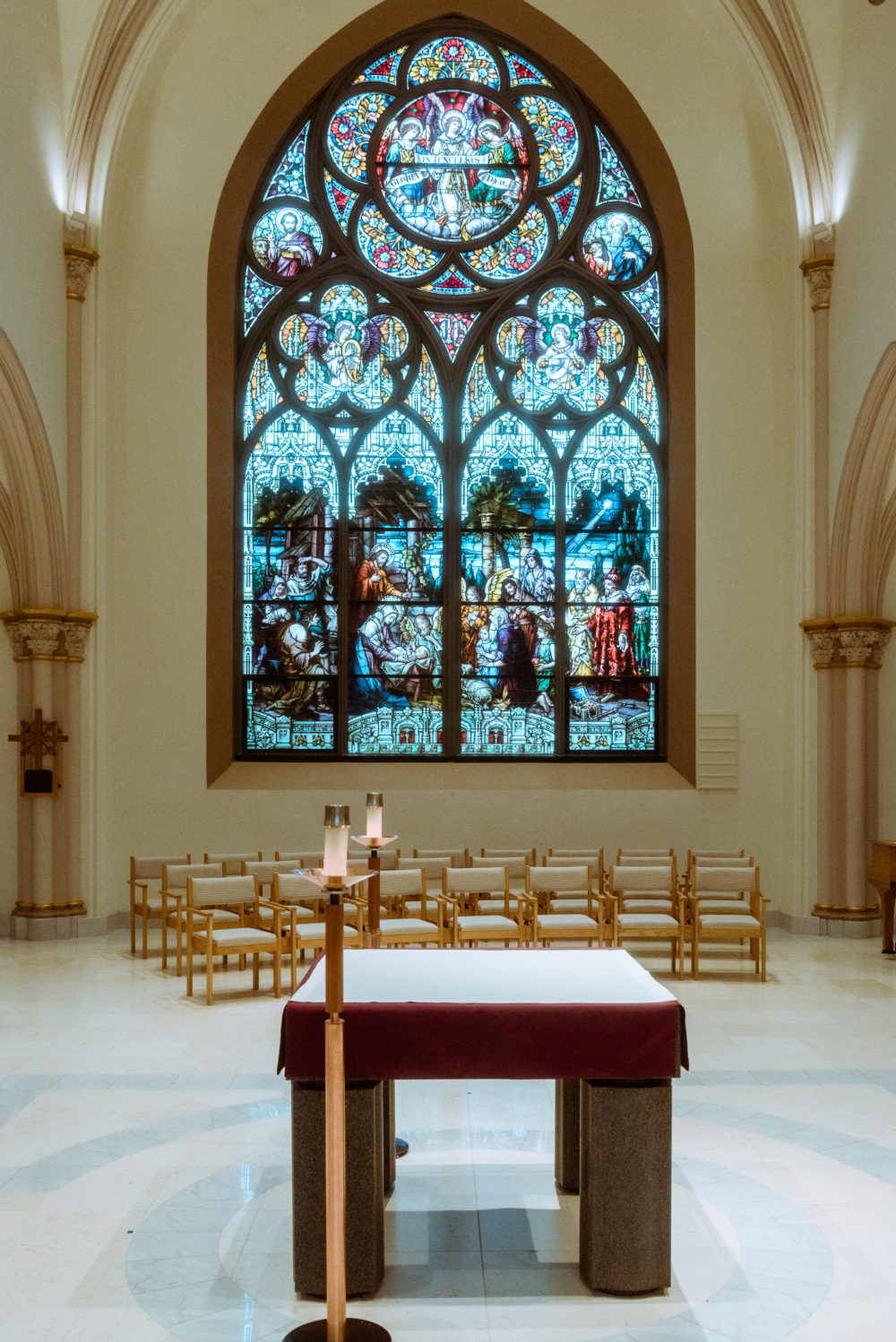 “We need to sacrifice to mitigate climate change”: The Adrian Dominican Sisters have poured efficiency savings into renewable energy.

“Sacrifice” is not a word Sister Corinne Sanders takes lightly.

It’s taken on additional meaning the past two years as the Adrian Dominican Sisters have worked to fight climate change.

The southeastern Michigan congregation in 2016 approved a sustainability enactment that says violence against the planet puts it in “dire jeopardy and worsens suffering of people on the margins, future generations, and all creation.” 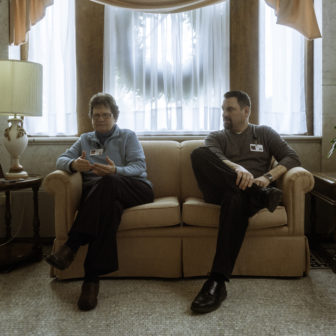 Since 2016, the Adrian Dominican Sisters’ campus about 70 miles southwest of Detroit has invested tens of thousands of dollars in clean energy.

Along the way, that “sacrifice” led to savings.

The energy efficiency and demand response savings have allowed the group to enroll in Consumers Energy’s Green Generation program to offset 100 percent of its energy use with renewable generation in Michigan. Consumers says the campus is among Michigan International Speedway and the city of Grand Rapids as the largest participants of the program, which includes nearly 20,000 homes and businesses.

“This has been a long-standing goal of theirs. We were just pleased we were able to find a program to meet their needs and do it in a cost-effective way,” said Phil Walsh, a corporate account manager for Consumers.

“That’s wasted energy — money left on the table,” Joel Henricks, director of facilities and grounds, said of LED replacements. “I have pallets of lights in the garage. We’re trying to get them all installed.” 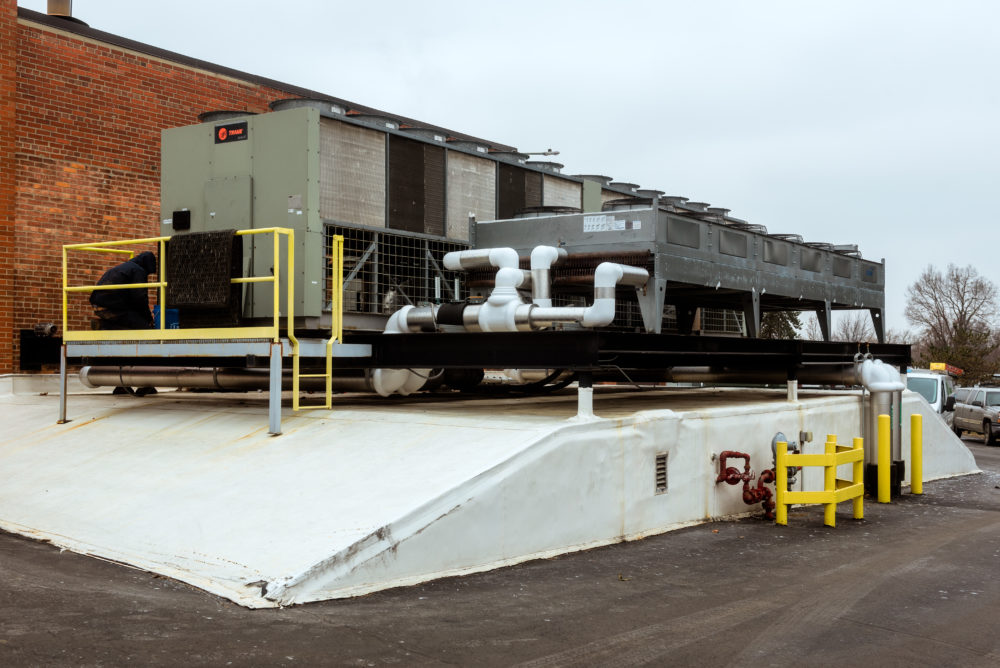 A dry cooler installed earlier this year cools buildings with water chilled by ice made during off-peak hours, when electricity is cheaper.

Instead of financing the improvements, Henricks said it’s easier to pay for them upfront and receive rebates and savings to offset the budget.

Of the campus’ nearly $3.2 million budget last fiscal year, about $92,000 was spent on “climate control” and sustainability, according to an annual report. Henricks said energy usage has dropped 21 percent since 2013 while electric bills are 15 to 20 percent lower on a monthly basis, saving about $50,000 a year.

Shifting energy usage and behavior away from peak times through time-of-use rates has added to the savings. The campus also participates in Consumers’ demand response program, agreeing to scale back usage during high demand periods.

“The congregation is open to some pretty progressive things,” Henricks said of the energy investments. “Financial savings weren’t necessarily our goal, but it’s been a positive byproduct. The importance of that is underestimated. Companies may not be concerned about climate change, but they certainly are over their bottom line.” 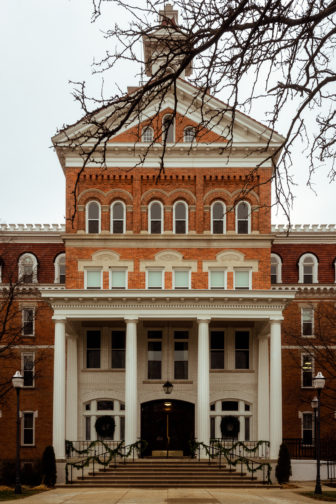 Healthcare centers and residences on the 106-acre property need steady temperatures throughout the year. The campus also includes a conference center, central offices and two full-size chapels, totaling about 500,000 square feet of building space. Of nearly 600 vowed women in the congregation, nearly half live at the Adrian campus.

Energy and transportation are two of six areas the group focuses on sustainability. The campus aims to replace its vehicle fleet with less-emitting vehicles as it can while reducing its fossil fuel usage 30 percent by 2022.

“Solar installation is certainly a major move we’re seeing [at congregations] across the U.S.,” Sanders said.

‘A sense of hope’ for climate action

Sanders wrote earlier this year that sacrificing to mitigate climate change is “a confession of faults of a group of women who understand their personal and communal role in the current state of our home, Earth. We recognize our lifestyles, personally and communally, have contributed to the hardship brought to Earth through living out of balance with creation. The statement also is a commitment to change.”

Every six years at governance meetings, Sanders said the congregation voices “what we believe are the pressing needs at the time.” Recognizing the need to address climate change “moved us in a more intentional way” after adopting the enactment on Earth community.

The move also aligns with Pope Francis’ Laudato Si encyclical in 2015, which “puts forward the idea of integral ecology, which suggests how we treat creation affects how we treat our fellow human beings,” according to the Adrian Dominican Sisters.

“I get hopeful and positive,” she said. “Despite the headlines, many businesses and corporations have a commitment to climate change. Even the energy sector realizes it can’t just keep doing life as we have been. There is a sense of hope in that.”