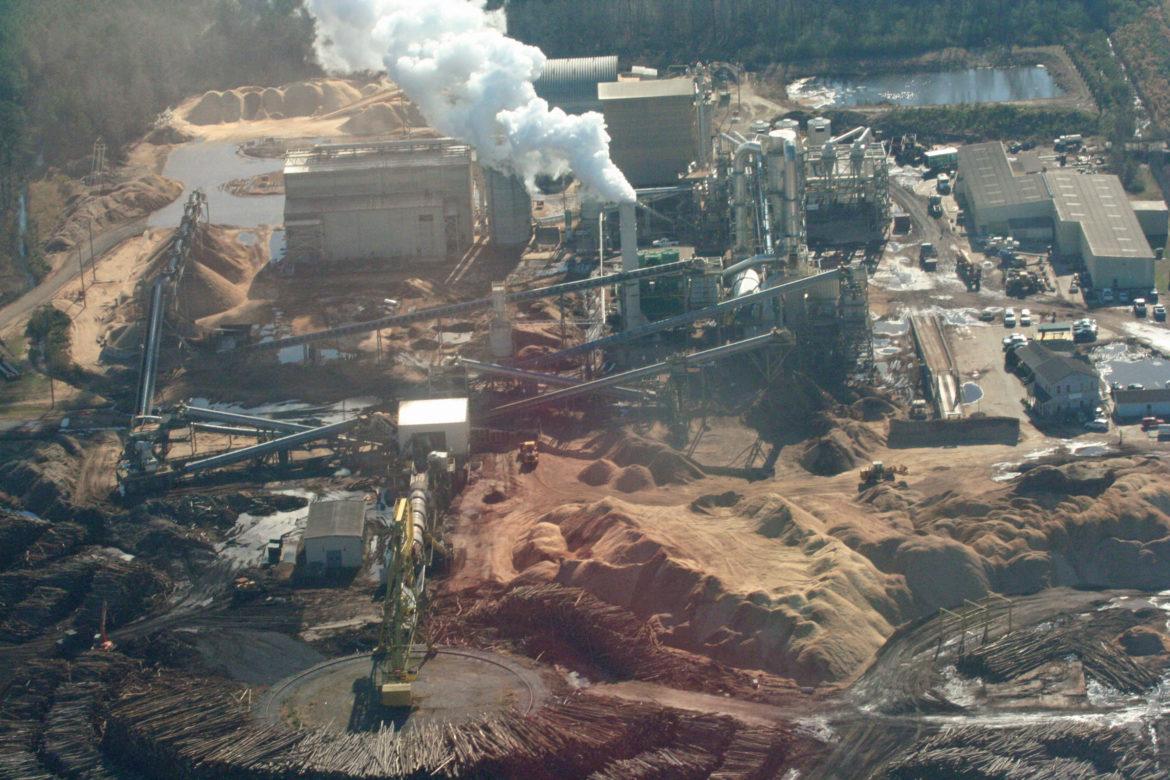 Enviva’s Ahoskie, North Carolina, facility produces wood pellets, many of which are shipped to international utility customers in Europe, where they are a popular coal substitute.

Critics hope an analysis of the pellet industry’s effects on carbon sinks and emissions could influence the biomass debate.

For years, environmental advocates and many scientists here have fought toxic air pollution from pellet mills and tried to rebut claims that wood pellets are carbon neutral — both with limited success.

But just as an international report warns that time is running out to avoid the worst impacts of global warming, advocates say a recent executive order on climate change by Gov. Roy Cooper, a Democrat, gives them new leverage to push back against Enviva’s proposed expansion.

“It’s time to put the brakes on this runaway train,” Danna Smith, executive director of the advocacy group Dogwood Alliance, said at a public hearing over Enviva’s bid to increase production in tiny Hamlet, halfway between Charlotte and Wilmington near the South Carolina border.

“At a time when we need to let forests grow so as much carbon can come back into the land as humanly possible,” she said, “cutting them down and burning them is dangerous and irresponsible.”

Smith’s immediate focus, she said in a later interview, is getting regulators to document how the pellet industry impacts forest cover as part of the governor’s climate order. Even this simple step could send a signal worldwide much different than the one being broadcast now.

A rapid rise with limited oversight 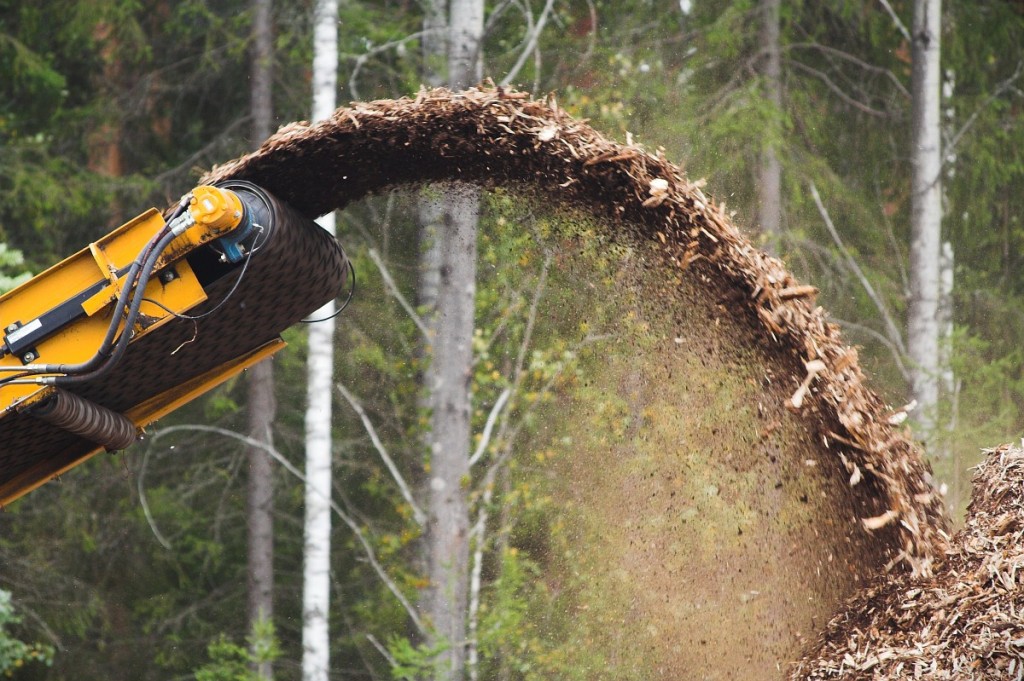 There’s no question that wood creates carbon dioxide pollution when it’s burned, typically more than coal per unit of electricity produced. Yet biomass is considered carbon neutral on the theory this pollution will later be absorbed by replanted trees.

Europe has seized on this rationale to meet its global warming pollution reduction goals, with the United Kingdom and other nations subsidizing power companies to burn wood pellets in their plants instead of coal. Biomass now makes up most of what’s considered renewable energy across the European Union, and analysts say Asia is not far behind.

The U.S. South, led by Maryland-based Enviva, has fast become the world’s largest supplier of these pellets. With easy access to ports in Wilmington and Norfolk, Virginia, eastern North Carolina is home to three operating Enviva plants and a fourth under construction in Hamlet.

Enviva now seeks to increase its output in Hamlet, in Northampton County near the Virginia state line, and in Sampson County about an hour north of Wilmington. If the plant increases totaling 450,000 tons per year become reality, the state will surpass Georgia as the country’s largest pellet exporter, sending 2.5 million tons per year overseas — nearly half of what the U.S. exported in 2017.

The industry’s rapid rise has alarmed environmental advocates and growing numbers of scientists, who contend wood pellets are far from green, since carbon dioxide released from burning pellets isn’t completely absorbed by replanted trees for many decades — if ever. Producing and shipping the pellets across the Atlantic also creates pollution. And pellet mills increase the incentive for logging, they claim, reducing forest stock that can absorb carbon.

North Carolina has no laws limiting climate pollution, and virtually no authority to police which forests are harvested and whether they are replanted. So advocates have concentrated on getting the Department of Environmental Quality to maximize the power it does have: issuing licenses that limit toxic air pollution from pellet plants. 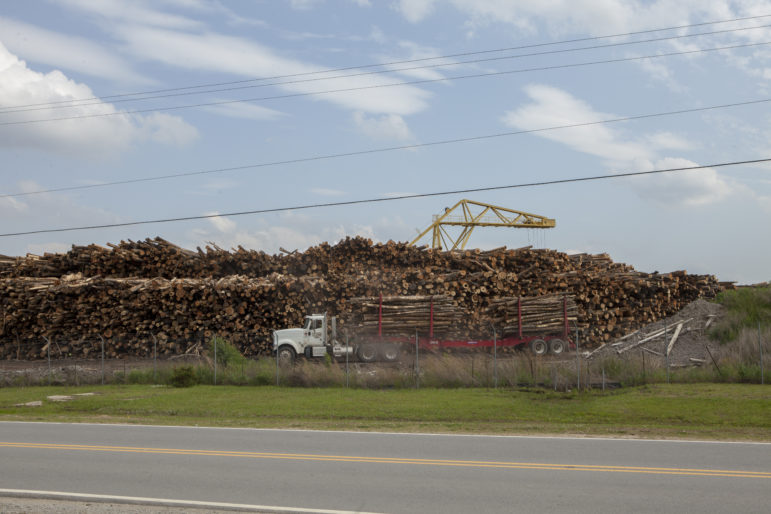 Quantifying the impact on forestlands

As Enviva seeks updated permits for its expansion, tighter air pollution controls may be in reach. But in Cooper’s executive order pledging a 40 percent cut in greenhouse gas emissions by 2025, advocates also see an opening to get the Department of Environmental Quality to examine the wood pellet industry’s impact on global warming.

The best tool DEQ has to evaluate wood pellet mills is its greenhouse gas registry, an inventory of all the state’s sources of climate-warming emissions, such as cars and power plants, and “sinks” such as forests, which suck carbon from the air and store it.

An analysis of how the pellet industry affects sinks and emissions could be highly influential as some European nations reconsider subsidies for biomass, and it could lay the groundwork for policy change in the U.S.

A detailed registry could also help settle some of the most heated arguments between the wood pellet industry and its foes. One key source of contention: how pellet-making influences the acreage and types of forests in the state.

DEQ’s draft registry now shows forests absorb about 4 percent more carbon compared to 1990. Advocates say more detail is needed to know whether that figure would be higher and by how much if not for the state’s pellet mills.

Enviva downplays its role in the size of the state’s forests, saying it doesn’t rely on whole stands of trees — instead using tree tops and limbs, young or diseased trees, or other wood unsuitable for lumber. Explaining the company’s tract-by-tract sourcing data, company spokeswoman Maria Moreno said in an email, “‘percent to Enviva’ is not an acreage number at all but is something quite different.”

“Since Enviva only sources the lowest-grade wood,” she said, “we typically only receive a percentage of the wood from a given harvest; the rest of the wood is sent to other users of wood in the forest products industry.”

‘You get a double carbon benefit when you leave trees standing.’

An exploration of the interactive map, however, shows it’s not unusual for the company to use more than 50 percent of the volume from a final harvest, and it doesn’t take long to find two clear-cuts reaped entirely for the company’s Northampton plant.

Investigations by advocates and media outlets have also documented whole trees being trucked from forest clear-cuts to Enviva mills, and critics doubt the company could meet its production goals with only low-grade wood.

The company’s expansion plans alone in North Carolina and Virginia would require 10,000 acres of mostly North Carolina forests per year, according to an analysis by the Chapel Hill-based Southern Environmental Law Center.

In any case, Enviva says it only takes wood from land that will be replanted, and cites statistics that more forests are being planted in North Carolina each year than harvested.

All forests aren’t equal, however. An acre of land is considered a forest if just 10 percent of it contains live trees that are at least 4.5 feet tall, according to U.S. Forest Service guidelines. Even when it is mature, studies show a so-called pine plantation stores less carbon than a natural hardwood forest.

“There is no assurance that the replacement forest will actually reach parity with the original one,” said Bill Moomaw, professor of international environmental policy at Tufts University.

It’s just one of several serious flaws in the “regrowth argument,” Moomaw said by email. Another is timing.

“The time required for a replacement forest to grow depends upon the age of the forest that was cut,” he said. “The benefit occurs little by little over the regrowth period, and is not complete until the end of the regrowth period.”

The forests that have supplied Enviva since 2011 were an average of 36 years old, according to its website. Climate scientists say carbon needs to be reabsorbed in a third of that time.

“Based on the most recent [U.N. Climate] report we’ve got 12 years to avoid the worst impacts of climate change,” said Heather Hillaker, an associate attorney with the Southern Environmental Law Center. “The way we should be looking at this industry is what can be done in that time period.” 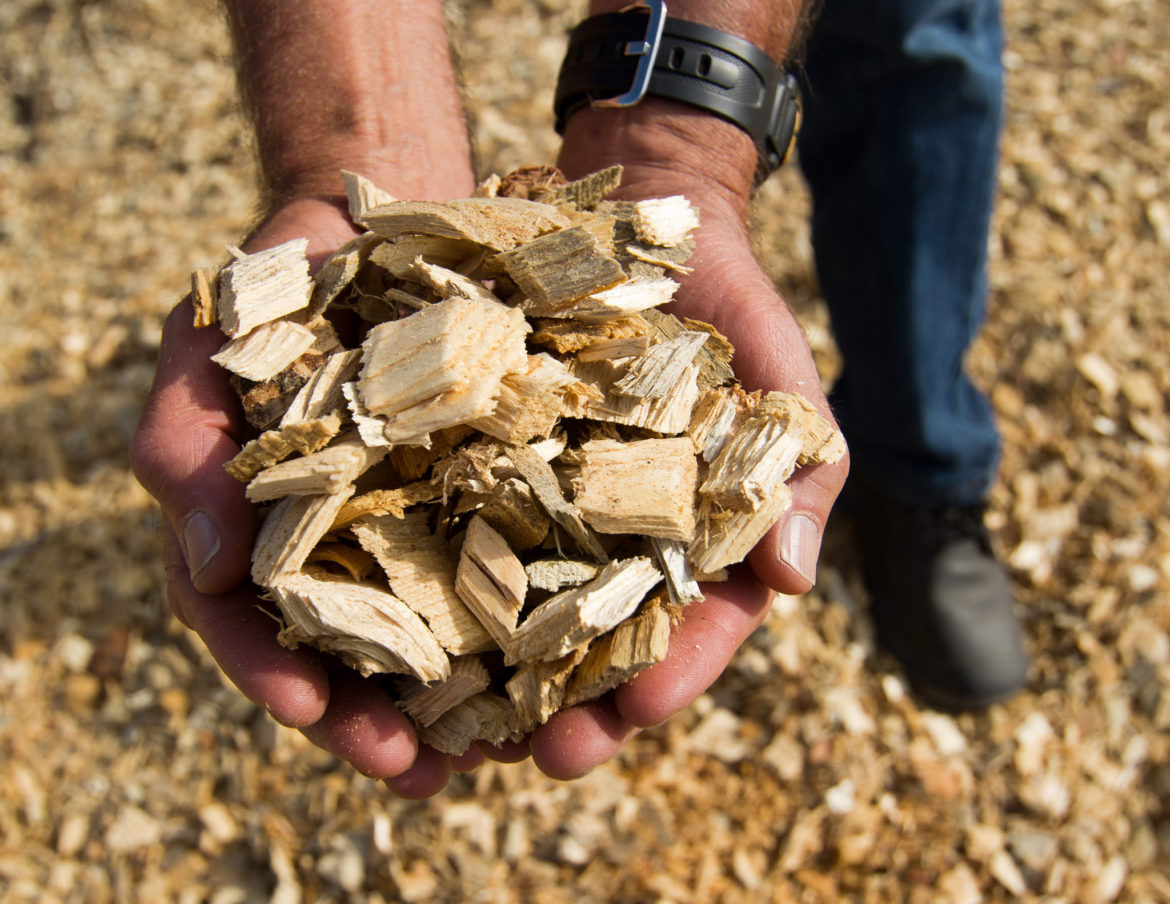 Logging affects not just forest stocks in the state, but emissions as well. Timber harvesting causes an instantaneous burst of carbon dioxide, largely due to respiration from microbes in the soil.

“You get a double carbon benefit when you leave trees standing,” said Smith. “You get more carbon getting pulled out of the atmosphere and you avoid emissions.”

While the draft North Carolina registry now shows carbon losses from soil, the causes are not specified. U.S. Forest Service data has shown that harvesting — not development or natural disasters — is the leading cause of carbon emissions from forests, contributing 69 percent over a four-year period.

That’s part of why, said Smith, “we need to transparently report and understand how much of that harvesting in North Carolina is being driven by the wood pellet industry.”

Lastly, advocates say the inventory should reflect the carbon dioxide released into the atmosphere when North Carolina’s wood pellets are burned. Right now, it doesn’t.

Martin also acknowledged that in the inventory, “the wood pellet industry is not specified in a line item.”

Enviva spokeswoman Moreno didn’t respond directly when asked if the company would support more detail in the state’s greenhouse gas registry. But she pointed to the company’s source tracking data, which she said validated that their fiber material was sourced sustainably.

“We are proud to be an industry leader on transparency in our sourcing practices,” Moreno said.

Publicly, the company appears to be honing on another outgrowth of Cooper’s climate order: a clean energy plan designed to increase the use of renewables in the public and private sectors, scheduled to be completed October 2019.

Reminding the state’s new climate council that many nations view biomass as carbon neutral, Jennifer Jenkins, Enviva’s vice president and chief sustainability officer, said at a meeting last month, “we would like to see biomass energy included explicitly as one of the options in that clean energy plan.” 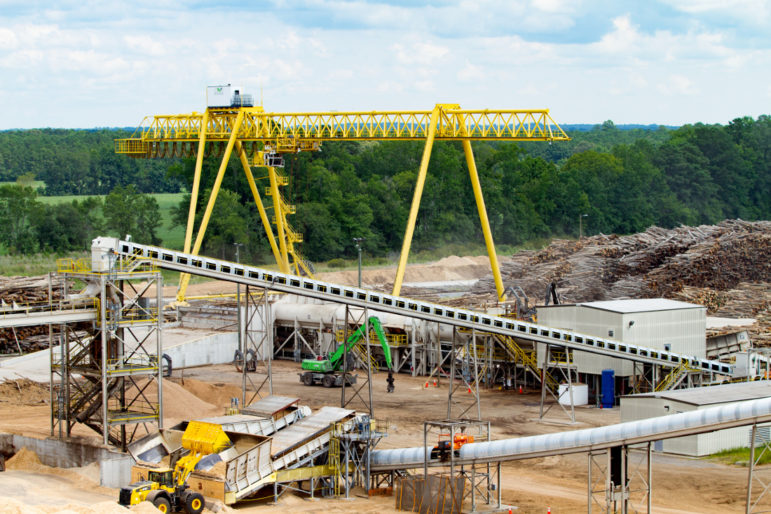 An Enviva mill in Virginia manufactures wood pellets to export to Europe.

‘We need that data’

Environmental advocates plan to fight that suggestion, but their near-term focus is the registry, due to be published at the end of January.

Yet even if wood pellet mills’ impacts are accurately documented, their foes will continue to face an entrenched and well-organized forest-products industry.

The Hamlet permit hearing was a case in point: Loggers, forestry consultants, local politicians, and Enviva-supported charities came out in force to support the expansion of the pellet mill.

Perhaps the most prevalent refrain was “to save the forest, you have to work the forest.” Wood pellets make it more economically attractive for a landowner to keep growing trees, the theory goes, and a pine plantation is better than a parking lot.

In a growing state where 85 percent of forests are privately owned — mostly by families rather than corporations — the narrative is a powerful one.

But Smith of the Dogwood Alliance says a complete realignment of financial incentives could also keep forests standing.

“There’s a whole suite of policies, new incentives, new regulation, that can move us in the direction of keeping more trees in the ground. I believe we can get there,” she said.

“But we don’t get there if we’re not willing to be transparent about what’s really going on with carbon stocks and what’s driving forest carbon loss. We need that data.”