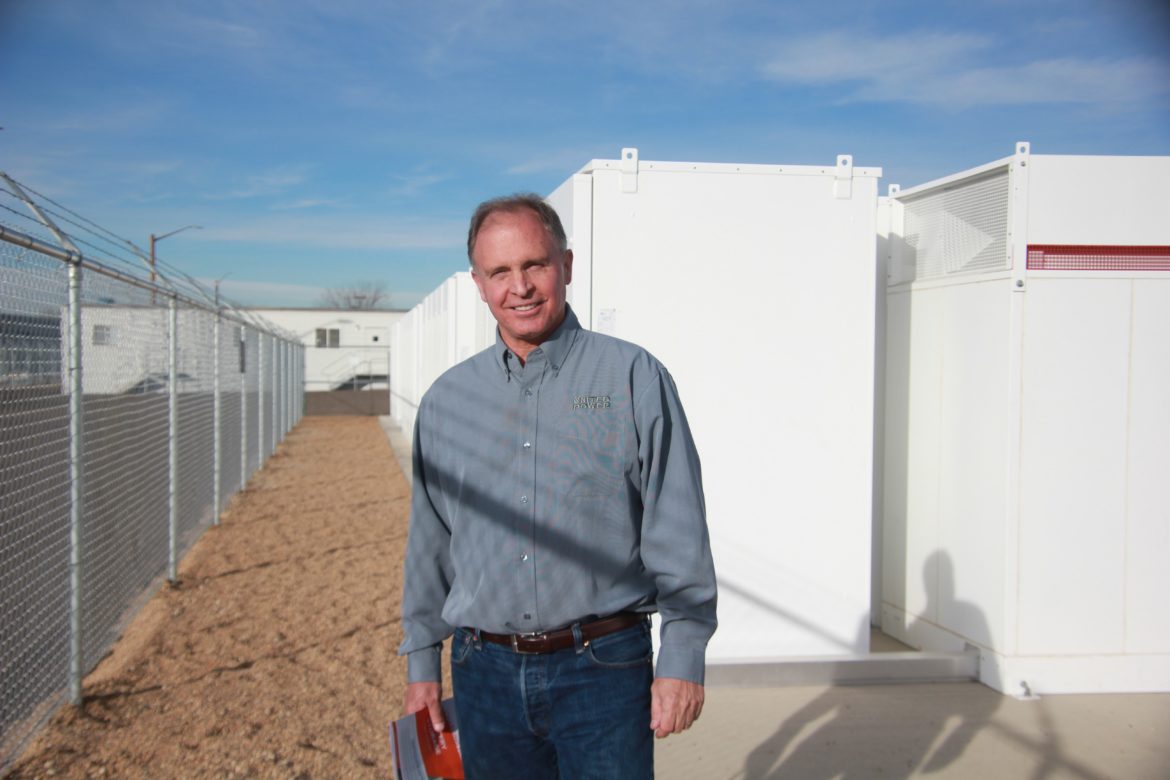 Jerry Marizza likes to think the Colorado electric cooperative he works at learned a lesson with solar power.

“We had the attitude that it was too expensive — nobody would do it except the rich greenies,” said Marizza, coordinator for United Power Cooperative’s new energy program. “Well, we were dead wrong.”

And so Marizza spoke with a sense of humility but also determination as he led visitors on a tour of the co-op’s new battery storage project about 30 miles north of downtown Denver. The 16 lithium-ion batteries total 4 megawatts and 16 hours of storage, making the project the largest in the state. It will likely remain so until Xcel Energy completes installation of 275 megawatts of battery storage by late 2022.

“If we don’t do this stuff, our members will, and we will need to learn after the fact about all this,” Marizza went on.

United Power sees the Tesla PowerPack ESS batteries as the sort of low-risk gamble that it is well-positioned to take and should take. The co-op has 87,000 metered members, from homes in the foothills to fast-growing towns and cities north and east of Denver. The oil and gas industry is responsible for a third of the co-op’s load and most of the growth, a 50 percent increase in eight years.

The electrical distribution cooperative’s embrace of batteries, though, has been stoking tensions with its power supplier, Tri-State Generation and Transmission Association, which adopted a policy last summer capping the amount of battery storage members are allowed to have on their systems.

A sign inside the chain-link fence surrounding United’s project contains an inside joke directed at the wholesale provider: “Battery Storage Project Serial #0001.” Tri-State, the joke goes, would never have a new technology project with serial No. 0001. Its chief executive, Mike McInnes, didn’t disagree when confronted with that statement at the Colorado Rural Electric Association conference in October.

“I hate to be a trendsetter. It’s just not in my DNA,” he said. Tri-State’s strategy, he added, was to “enjoy the benefits, but not the bruises” by waiting until the industry has “worked out the wiggles” of batteries. “If we go slow, we can provide a much better product and much less volatility as far as the rates go, and much less risk for our members.” 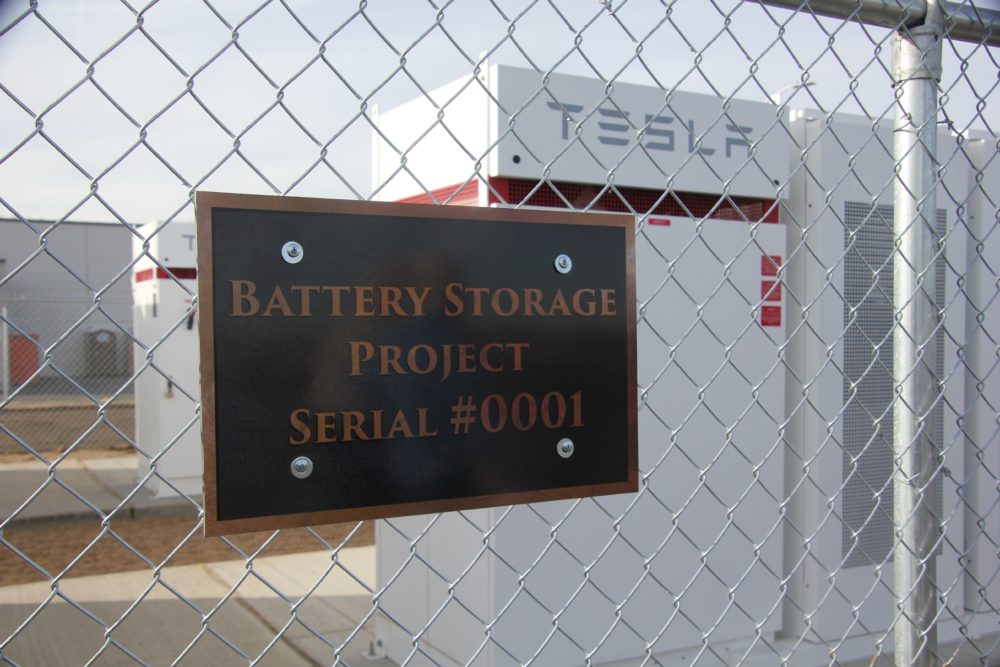 United, despite its early skepticism, wasn’t caught entirely flat-footed on solar. In 2009, the cooperative launched the first community solar project in the nation, allowing customers to buy solar capacity in lieu of rooftop solar. The co-op plans a similar “community battery” storage, allowing users to purchase a share of the battery system’s output to directly reduce demand charges.

The serial number sign is also a subtle declaration of United’s philosophy and intent. The role of battery storage isn’t entirely clear yet, but the cooperative is determined to stay engaged with the technology long enough to find out.

Marizza and United Power began investigating battery storage three years ago, got board approval two years ago, and signed a contract with Tesla in late 2017. Crucial was Tesla’s warranty that the batteries will remain at 100 percent capacity for 10 years. Marizza expects they will decline to 70 percent capacity after 20 years. With savings of $100,000 a month, United expects full payback within eight years on the cost of $7 million to $8 million.

United intends to initially use the batteries solely for peak shaving, four or five times a month, a maximum of 60 times a year, draining them completely during the co-op’s peak demand between 3 p.m. and 9 p.m. The co-op has 500 megawatts of peak demand in summer, 300 megawatts in winter. The warranty allows up to 150 “events” per year. Recharging will occur at night, when the wholesale rate charged by Tri-State is 4 cents per kilowatt-hour; the co-op’s retail rate is around 10 cents.

‘We are trying to become a cliché: ‘the utility of the future.’’

In time, United Power expects to learn new uses for the battery. “We really consider this project to be a laboratory,” said CEO John Parker. He points to work in Hawaii by the Kauai Island Utility Cooperative. “They are using them in ways they didn’t even consider,” he said moments before the ribbon was symbolically snipped.

United believes battery installations could be used in more remote locations, such as to provide voltage regulation for its customers in the foothills of the Rocky Mountains or perhaps even for spinning reserves, as generation capacity that can respond within 10 minutes to compensate for outrages is called.

This first battery outlay sits near a substation, on a concrete pad about the size of a tennis court. Storage is most useful in the middle of a load center, Mazria said.

The location also reflects United’s vision of the future in which electricity production is more decentralized. Most storage will also occur at the distribution level, Marizza predicted, as cooperatives and other utilities become more like middlemen between buyers and sellers, kind of like Amazon.

But again, the co-op and Tri-State disagree. Tri-State members are limited under their contracts to generating no more than 5 percent of their own loads. Directors representing the 43 member co-ops in June 2018 adopted a policy that expanded the limit to include “energy devices, such as batteries.” The policy urged by Tri-State officials was a direct response to United’s storage plans.

Batteries do not displace the need for transmission, says Tri-State. “Batteries may be discharged to serve load at certain times, but the transmission system must always be available to serve the full load requirement,” said spokesman Lee Boughey. “Consistent with [Federal Energy Regulatory Commission] regulations, the use of batteries does not reduce transmission demand charges.”

Storage, if still largely unproven, also remains critical to 100 percent renewable goals. In Colorado, directors of Platte River Power Authority approved that goal for 2030 for the four member cities of Fort Collins, Loveland, Longmont and Estes Park. It is planning a 1- or 2-megawatt storage project near a solar field. Xcel Energy in December announced a goal of 80 percent by 2030 and 100 percent “carbon-free” energy by 2050. The later goal allows burning coal but without emissions.

“We think that this battery and others like it will be one of the things that has to happen to have that carbon-free future happen,” said Parker, the United chief executive. 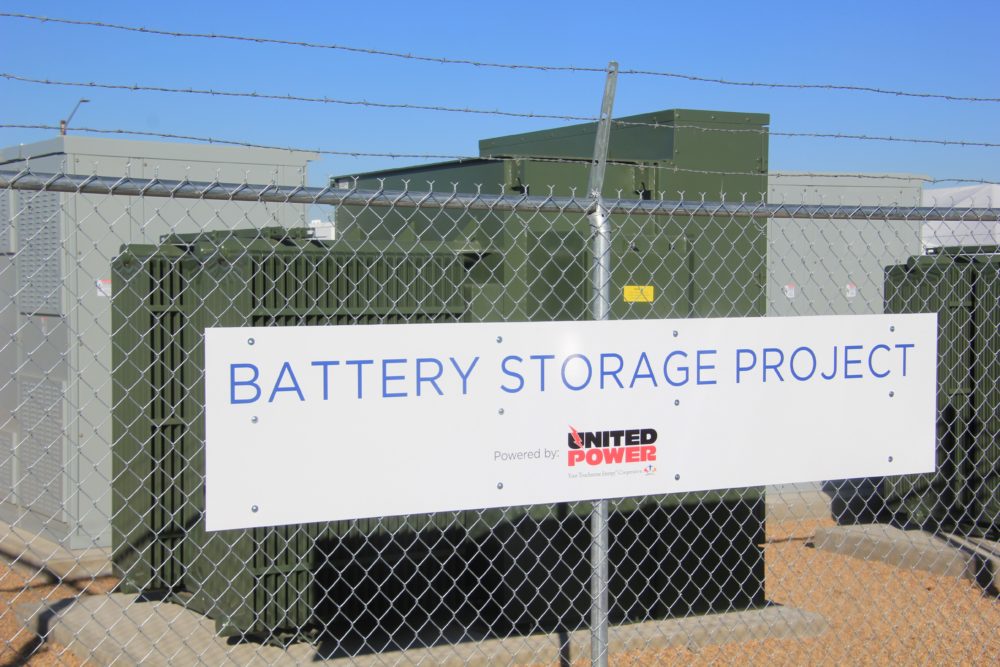 Dan Borneo, engineering project manager at Sandia National Laboratories in Albuquerque, said batteries have become a much bigger thing. “To go back 12 years ago, there really wasn’t much going on,” he said. Now, with battery storage costs dropping by half in the last three to four years, it’s being shown that battery storage can replace peaker plants and cost-effectively.

In California, Anaza Electric has been looking to battery storage as a way of improving its resilience. It depends entirely upon outside generation to serve 10,000 co-op members in the high desert east of San Diego and Los Angeles. A study 10 years ago found a second transmission line would cost $35 million to $50 million, more than the co-op’s total value. A wildfire this summer severed power for 10 days in the hottest week of summer. That searing experience sent Anza, with aid of Sandia Laboratory, studying the possibility of a microgrid built around battery storage.

Colorado-based Rocky Mountain Institute has been helping smaller electrical providers in procuring lower-cost solar projects through bundling of demand. In 2018, it began doing the same with solar-plus-storage. One such call for proposals described up to 13.25 megawatts of distribution-scale and storage in Texas for a co-op and other electrical providers in northern Texas.

Because of its size, Xcel Energy can get super big projects, “but small co-ops can get good prices too if they are smart about it,” RMI principal Mark Dyson said.

Guzman Energy’s Jeff Heit said every utility has unique demands. A co-op or small town in New Mexico will have different needs than Xcel Energy. What would make batteries more valuable would be an organized electrical market, unlike the bilateral markets that characterize the West. “In bilateral markets, when you put in battery storage, it has to be for a specific use,” said the Denver-based Heit, managing director of the full-service energy company.

The United States now has about 760 megawatts of battery storage, the vast majority of it in California, said Kevin Phelan, chief marketing officer for Engie Distributed Solar. The firm oversaw engineering, procurement and construction of United Power’s battery project. Phelan said 600 to 700 megawatts of new battery installations will be completed in the next couple of years, among them a 300-megawatt project in Monterrey, California. That will be the largest in the world. “This just shows you how the market is looking to advance over the next couple of years,” he said.

Phelan said Colorado should be seen as being “toward the front end of that pack” in the nation’s interior.

At United Power, Marizza confesses he’s not entirely sure of what his new batteries will do. He doesn’t see them as the end-all, be-all answer. They represent just one piece of the puzzle. But he’s eager to figure out where they fit in.