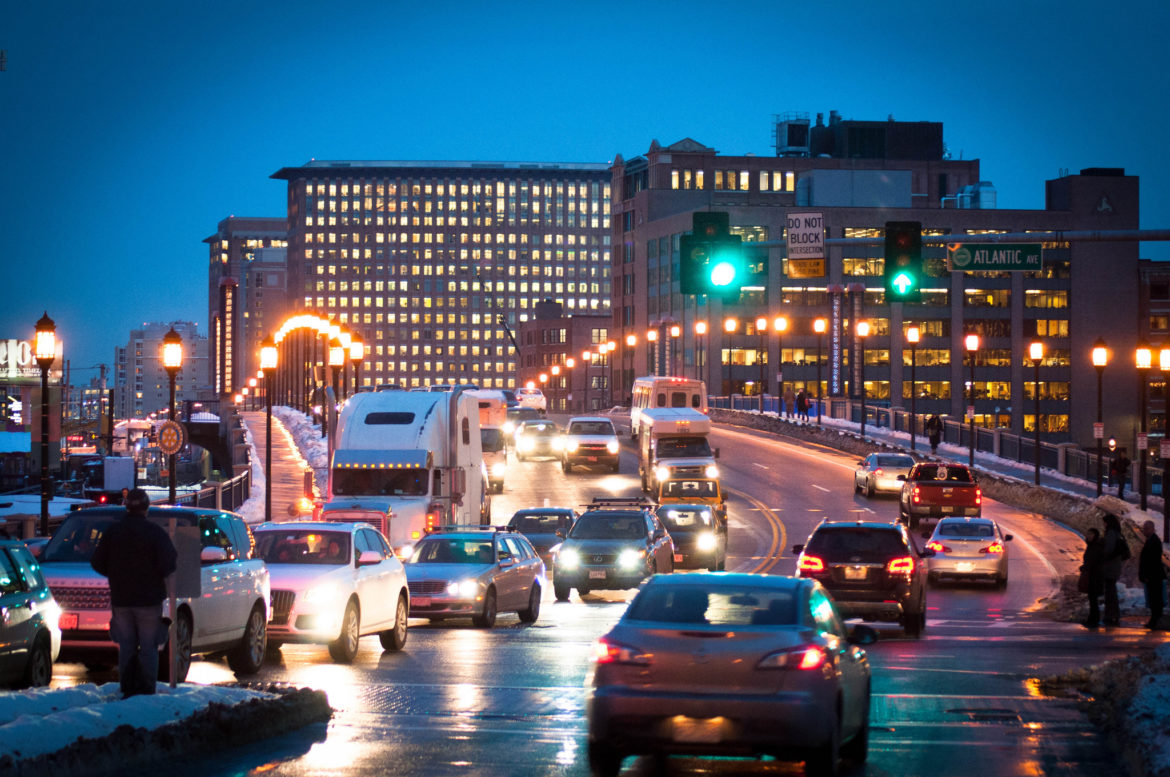 Traffic moves along a snow-lined roadway in Boston, Massachusetts.

State lawmakers aren’t waiting for a multi-state partnership to put a price on carbon emissions from cars and trucks.

As Massachusetts legislators start their new year, bills calling for carbon fees for transportation are gaining momentum, with many lawmakers and advocates optimistic that a measure could make it to the governor’s desk this session.

“This issue is now up on everybody’s radar screen,” said state Sen. Mike Barrett, a longtime advocate of carbon pricing. “Let the debate about fair and effective design begin.”

Some form of carbon pricing — an added charge on the use of carbon-emitting fuels — has been proposed in every Massachusetts legislative session since 2013. The goal of such measures is generally to encourage lower use of polluting fuels while raising money that can be used to combat the effects of climate change.

Electricity customers already pay a carbon fee: Massachusetts is a member of the Regional Greenhouse Gas Initiative (RGGI), a nine-state system that caps carbon emissions from power plants and requires generators to pay for their share of the allowed pollution. However, there is no charge on transportation emissions, which make up 43 percent of the state’s carbon pollution, or on other fossil fuel use, such as home heating.

“The power sector only accounts for about 20 percent of the state’s overall greenhouse gas emissions,” said Jordan Stutt, director of the carbon program at the Acadia Center, a Boston nonprofit that promotes clean energy solutions. “If we’re serious about acting on climate we need to do more than address just one-fifth of the problem.”

Massachusetts has joined an eight-state coalition that intends to develop a market-based system to reduce transportation emissions, but that initiative is in the early planning stages.

While this effort develops, legislators continue to tackle the transportation and building sectors. None of the carbon pricing proposals made in the state thus far has ever made it into law, but the idea is gaining traction as concerns about climate change are rising among policymakers and the public.

In the last session, which ended on July 31, 2018, the Senate unanimously passed an omnibus energy bill that included a requirement for a market-based mechanism to reduce emissions from transportation sources. A House bill sponsored by Rep. Jennifer Benson that called for a fee on all fossil fuel use was supported by 70 of the 160 House members.

Neither measure made it into the final energy bill that became law in August, but legislators are undeterred.

With a Jan. 18 deadline to file legislation looming, Benson plans to re-submit her bill with only small tweaks. Sen. Marc Pacheco, chair of the Senate Committee on Global Warming and Climate Change in the last legislative session, intends to file a broad-based climate change bill that again includes the requirement for a market-based carbon reduction program. Barrett, who chaired the Telecommunications, Utilities and Energy Committee, also expects to again propose carbon-pricing measures.

‘If we’re serious about acting on climate we need to do more than address just one-fifth of the problem.’

Benson’s bill would impose a fee — initially $20 — on every metric ton of carbon dioxide emissions created by burning fossil fuels. Of the revenue generated, 80 percent would be rebated to consumers and businesses, with low-income residents getting a heftier share. The remaining 20 percent would be invested in green infrastructure, again with low-income communities receiving more funding.

She estimates that her bill will have about 80 co-sponsors in the House, giving the measure majority backing. She has also been gathering support from a diverse coalition of student groups, faith-based organizations, environmental justice advocates, business associations, academics, and economists.

Pacheco’s more comprehensive bill would require the state to create or join a market-based system, such as a RGGI-style cap-and-trade program. If the multi-state effort to reduce transportation emissions comes to fruition, it would likely meet this requirement.

Pacheco’s bill will also include provisions that would lift the state’s net metering cap, increase procurement offshore wind, and increase requirements for energy suppliers to obtain electricity from renewable sources. This session, Pacheco has partnered with state representatives who will file his bill in the House as well, helping bridge the divide between the two chambers, he said.

Barrett did not delve into the details of his planned bill, but said he will be focused on making sure any carbon price starts at a minimum of $15 per metric ton; any lower, he said, would be inadequate. He also wants to make sure the state moves forward with carbon pricing in a timely way even if the multi-state transportation effort falls short.

“I envision a bill that reinforces the Senate’s interest in deadlines,” Barrett said.

Massachusetts is part of a national trend as at least 15 states are set to consider carbon pricing legislation this year, said Michael Green, executive director of Climate XChange, a Boston-based group that advocates for carbon pricing. After a decade of setting bold goals for reducing emissions, he said, states are starting to get serious about measures to achieve those targets.

“It’s time to implement the policies that are really going to get us to those goals,” he said. “That has really opened the door to carbon pricing.”

A major business group in the state, Associated Industries of Massachusetts (AIM), opposed the last round of carbon pricing proposals and is likely to do so again this session. The group has outlined its own proposal that would cover all carbon-emitting sectors in one system, pull Massachusetts out of RGGI, and eliminate existing ratepayer-funded renewable energy and efficiency programs, said AIM’s executive vice president Christopher Geehern. The revenue created would then be distributed to programs that would compete to prove their effectiveness at fighting climate change.

The host of competing visions for a carbon pricing system creates some uncertainty about the future of the idea. But a growing sense of urgency around climate change, a greater understanding of the benefits of carbon pricing, and an influx of new legislators all have advocates feeling cautiously optimistic about the session ahead.

“There’s a growing recognition of the need to actually act on this problem and not just talk about it anymore,” Stutt said.