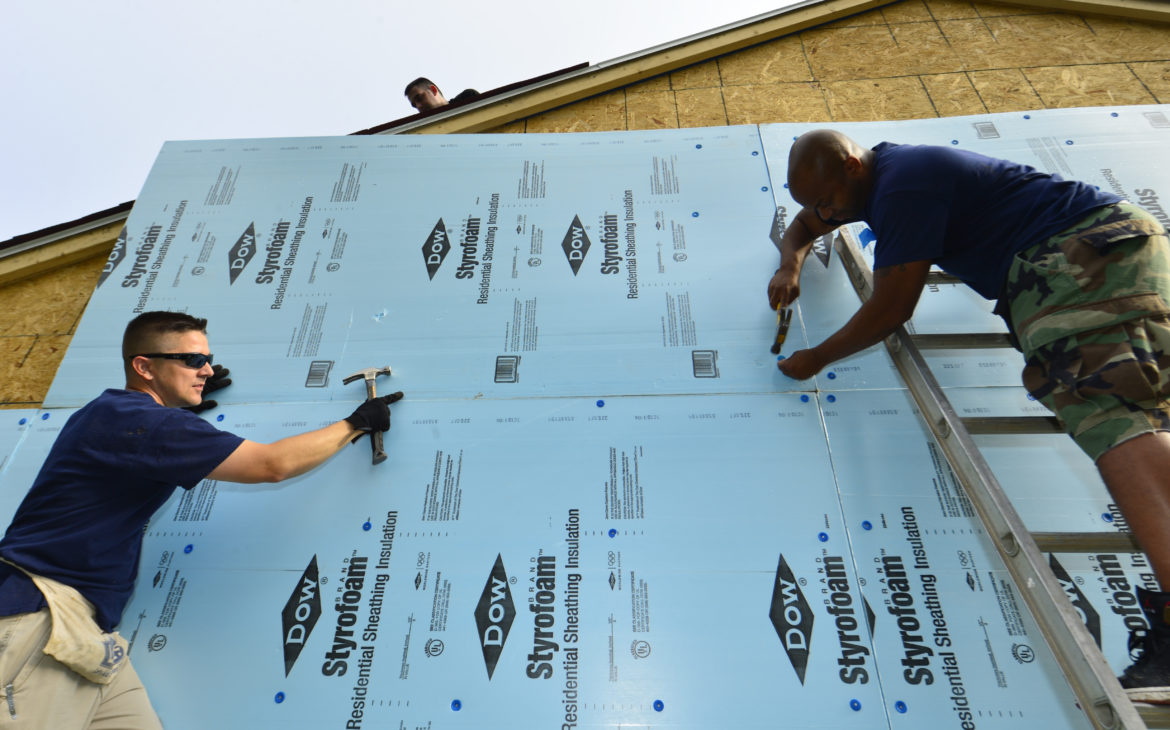 Air Force airmen attach insulation to a Habitat for Humanity house under construction on July 12, 2014.

Efficiency Maine said in its latest annual report that funding for the fiscal year ending in June 2018 topped $49.2 million, up from $44.8 million in the prior year. The money is spent on initiatives including weatherization, low-income assistance, and retrofits in the commercial and industrial sectors.

A major component of its funding is the Regional Greenhouse Gas Initiative (RGGI), an 11-year-old program of nine Northeastern states to incentivize lower emissions from the power sector. Member states’ electric utilities must bid for a limited number of carbon allowances to match power plant emissions. Its quarterly auctions have raised more than $3 billion that has been returned to New England and Mid-Atlantic member states. The vast majority of that money has been used to fund statewide energy efficiency programs. Maine’s share has totaled nearly $101 million.

Those restored funds allowed Efficiency Maine to revive programs that were deprived support. Weatherization through the Home Energy Savings Program was one of the important programs that was cut and then restored during the year when more funds became available.

Other efficiency funds come from utility ratepayers, and various funds, settlements and contracts with distribution utilities, the federal government and the regional power grid operator.

Aside from the funding issues, Stoddard said fundamental changes in the marketplace have institutionalized the efficiency ethic, which allows for a reallocation of resources.

An example is that LED lighting is now part of the original design of commercial and industrial buildings and no longer is a feature that has to be incentivized. This allows the organization to focus exclusively on building retrofits.

“We are assuming when a commercial building is newly constructed, LED lighting is something that would’ve been selected regardless of any efficiency program, so we concluded they no longer need a financial boost from our program. So that ends up conserving our funds,” Stoddard said. “That’s pretty wonky, but that represents a significant shift.”

Another shift is that contractors and appliance suppliers are recommending more efficient units, like water heaters. “That’s a much larger price point [than for a light bulb], so we’re seeing significantly better results by shifting the point of intervention upstream to the contractor,” he said.

Another change unrelated to program funding is the amount of activity in finding savings for residential natural gas customers. With lower natural gas prices and more efficient heating and boilers, the amount of savings has diminished and payback times for customer investment have gotten longer, making those programs less popular.

“There’s a disproportionately high number of low-income customers with electric resistance water heaters, so using heat pumps could prevent them from going into arrears,” Stoddard said.

Other highlights from the annual report include: