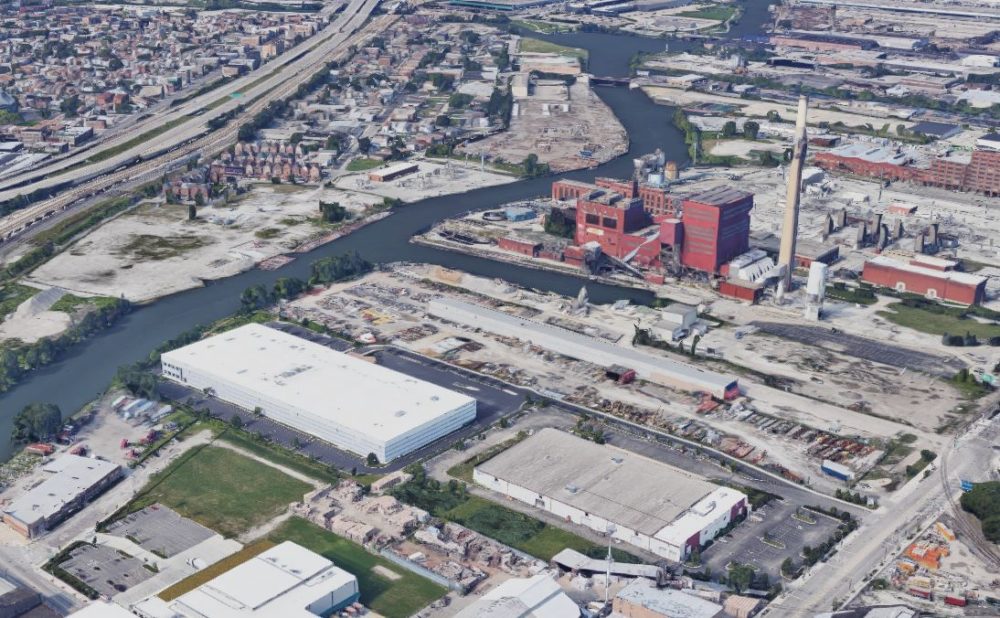 The former Fisk coal plant closed in 2012, but a fight over redevelopment plans continues.

The property owner acknowledged that diesel-fired peaker plants could continue operating on the site even after redevelopment.

More than six years after the celebrated closure of the Fisk coal plant in Chicago, residents are unhappy with plans for the site that include a logistics hub and the possibility of diesel-fired peaker plants continuing to operate there.

NRG Energy, which acquired the site from previous owner Midwest Generation after the plant closed, has sold it to a real estate company specializing in logistics, the office of local alderman Danny Solis told the media outlet Block Club Chicago.

The company has an agreement with Hilco Redevelopment Partners to “explore the potential for redevelopment of the Fisk site,” NRG spokesman David Knox told the Energy News Network, and he said the peakers could continue to operate even if the site is redeveloped.

Hilco last year purchased the site of the other shuttered Chicago coal plant, Crawford, in the nearby Little Village neighborhood. Plans are moving forward for a 1 million-square-foot warehouse and distribution center there, and the Chicago City Council is considering tax incentives for the project. Locals have stridently opposed the idea because of fears of diesel pollution, which is linked to higher rates of cancer, respiratory disease and other illnesses.

“Pilsen as an environmental justice community is supposed to be treated with extra attention or special care,” said Joshi Radin, a member of the Pilsen Environmental Rights and Reform Organization (PERRO), the grassroots group that helped lead the fight to close the coal plants. “I would like to see there be no fuel combustion at all on the Fisk site” – including diesel from trucks or peakers.

PERRO members say they are frustrated by a lack of transparency and community input regarding the future of the site. After hearing rumors about Hilco, PERRO members asked city planning officials about it at a recent community meeting regarding a proposed new park on another part of the Fisk site.

PERRO leader Troy Hernandez and other attendees described the response as evasive. The city Department of Planning and Development did not return a request for comment for this story. Hernandez said PERRO members feel the city is moving the park plan forward to mollify residents or distract attention from the possibility of a logistics hub on the site.

“You’re going to have a football field-sized park right next to a giant distribution facility – is that where you want to be doing jumping jacks?” Hernandez said. “That’s a terrible place to put a park.”

After the coal plants’ closure, Mayor Rahm Emanuel convened a task force including Pilsen and Little Village residents, architects and the nonprofit Delta Institute to propose new plans for the sites. Task force members conducted hundreds of surveys and produced detailed renderings and reports, with clean energy, green space, light manufacturing and river access listed as priorities. But residents feel like that process has been ignored.

PERRO members are calling on the Illinois EPA to deny the peaker permit request or demand more information, and on city officials to deny permissions that might be needed for a logistics facility. The local alderman has much power over such decisions. Solis is not running for re-election in February, and the candidates vying for his seat include Byron Sigcho-Lopez, executive director of the Pilsen Alliance, another group involved in the coal plant campaign.

Previously the city had announced the Fisk site would be a barn for public transit buses. Many locals were disappointed with that plan, but Hernandez and other PERRO members said they would support an all-electric bus depot with solar charging.

“I would love to see a forward-thinking sustainable energy operation, a solar farm or a park or some other endeavor,” said Radin, an artist with a focus on ecology.  “It seems like the wrong time to persist with dirty energy. It would be great to come up with a use for the site that’s both economically and environmentally friendly. I want to believe those are not antagonistic values.”

The Illinois EPA held a public meeting in Pilsen in early December and accepted public comments on the peaker permit extension request. Illinois EPA representatives who spoke at the meeting said the peaker plants are currently in compliance with regulations, and extended the comment period through Dec. 28 in response to public opposition and questions.

The peakers have a capacity of 34 megawatts, much lower than the 326 megawatt capacity of the closed coal plant, but they can obtain lucrative payments from the PJM grid operator for capacity – the promise to be ready to provide power if needed.

The permit would allow eight peaker fuel turbines to generate up to 20,000 megawatt hours a year, burning ultra-low-sulfur diesel fuel. In 2017, the turbines generated 5,080 megawatt hours. In 2011, while the coal plant was still open, only 261 megawatt hours were generated. However with lower-sulfur fuel being used, NOx emissions were 60 tons in 2017 compared to 1,098 tons in 2011, and carbon dioxide dropped from 1 million to 8,200 tons, according to a presentation by the Illinois EPA. NRG also runs such peakers at its Joliet, Powerton, Will County and Waukegan coal plants in Illinois.

“While the peaker operations may vary from year to year, they operate very infrequently, usually when electric system conditions are stressed,” said Knox. “With the coal plant permanently retired and only the peakers remaining, operating on low sulfur diesel fuel, total annual emissions are significantly lower.”

Rachel Fakhry, a policy advocates with the Natural Resources Defense Council, said that the permit should not be extended unless more analysis is done to show that the peakers are needed to maintain grid reliability, and that there are not more cost-effective ways to meet such needs. She noted that a recent analysis of all Illinois coal plants by the Union of Concerned Scientists found that NRG’s peaker plants in Waukegan about 40 miles away could be closed (along with the entire plant) without jeopardizing the grid. She said this analysis would likely imply that Fisk’s peakers could also be discontinued without causing problems with energy availability in the area.

“PJM has a not-insignificant surplus of capacity,” Fakhry said. “And no one has explored cleaner and cheaper and newer alternatives like storage or demand response, which would be a great alternative (to meeting or reducing peak demand). There’s been no due diligence whatsoever in terms of do we need this and if we do, are there alternatives that could be better for our customers.”

While pollution from the peakers may be relatively insignificant, she said, the permit decision has larger implications.

“If Fisk were to have its permit extended, NRG could get some handsome profits from PJM capacity markets that would give some lifeline to (coal-fired) NRG operations in Illinois,” she said. “Are we willing to impose this inefficient solution on customers just to give a power company a way to keep their foothold in Illinois?”