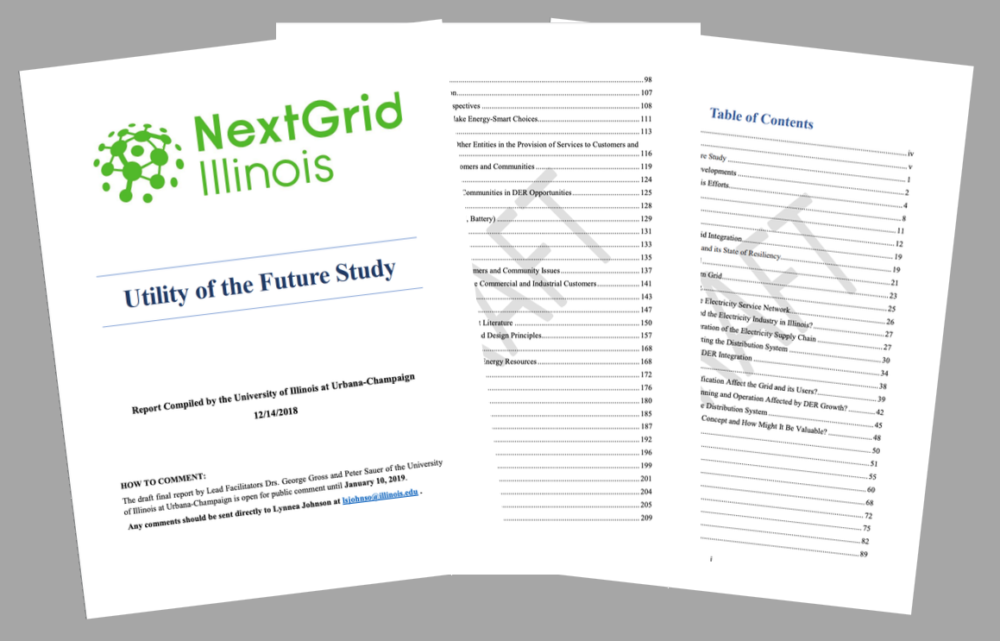 NextGrid could determine the future of the state’s grid policy, but the study’s own future now depends on an open lawsuit.

Illinois’ NextGrid study met its latest hurdle this week, when the Circuit Court of Cook County issued an injunction blocking the release of the final report until a lawsuit filed against the Illinois Commerce Commission in June is resolved.

The report had been expected by January 15 and is intended to guide electric grid policy in Illinois for the next several decades, particularly as technology such as smart meters and renewable energy allow consumers to take a more active role in managing their energy usage.

The study has been led by the ICC and facilitated for the past year and a half by the University of Illinois at Urbana-Champaign. Study participants included advocacy groups such as the Citizens Utility Board, government organizations like the Illinois Attorney General’s Office, private developers like Tesla, and the state’s two main electric utilities, ComEd and Ameren.

The ICC released a draft of the final report in mid-December. However, it’s been the subject of controversy since last summer, leading to this week’s injunction.

Here’s what’s clear now and what remains to be seen:

Beyond that, Illinois PIRG and GlidePath argue that the state’s utility companies have outsize influence on the study, namely by funding project facilitators and having the chance to review study drafts prior to release. “Once published, the utility companies who paid for the report would be able to use NextGrid to lobby the General Assembly and the ICC for favorable regulations,” according to a January 16 news release issued by the plaintiffs’ spokesperson.

The ICC agreed soon after the lawsuit was filed to open meetings to the public, and Illinois PIRG and GlidePath did join additional working groups.

Initially the plaintiffs had argued that all meetings up to that point should have been considered null and void. The ICC did not make that concession.

With that, the lawsuit remains open. After some initial early hearings and pretrial proceedings over the past several months, “the case will proceed, or we can expect some settlement with the commission,” said Abe Scarr, Illinois PIRG’s executive director.

He’s not sure of the timeline on those next steps, but, he said, “my experience so far is that it can take some time.”

What this means for the NextGrid report

For the moment, the injunction simply means the final report awaits release and won’t be available until the case is resolved.

The ultimate future of the report depends on the outcome of the lawsuit, which the parties have little to comment on at this point, awaiting settlement or court.

This could lead, on the one hand, to the final report being released as is — or, on the other hand, to the NextGrid study process beginning again.

“We believe a significant amount of the report was produced in violation of the Open Meetings Act,” Scarr said. “So either that shouldn’t be included or should be redone.”

The plaintiffs have requested that the ICC and Sheahan consider “how they can remedy the problem they created by conducting meetings and drafting sections of the report without following the law, and we are willing to consider any proposals they might make,” Peter Gray, the plaintiffs’ spokesperson, wrote in an email.

“But any conclusion must come with a finding or admission that the Open Meetings Act applies to NextGrid, and that the ICC and Chairman Sheahan violated the Act,” Gray added.

The injunction “does not address the merits of the case, it merely maintains the status quo of the litigation,” Victoria Crawford, the ICC’s senior public information officer, stated in an email. She added: “The ICC respects and appreciates the hard work done by the Lead Facilitators from the University of Illinois, the Working Group Leaders, and the approximately 250 organizations who participated in the NextGrid study. We will continue to defend against this litigation in court.”