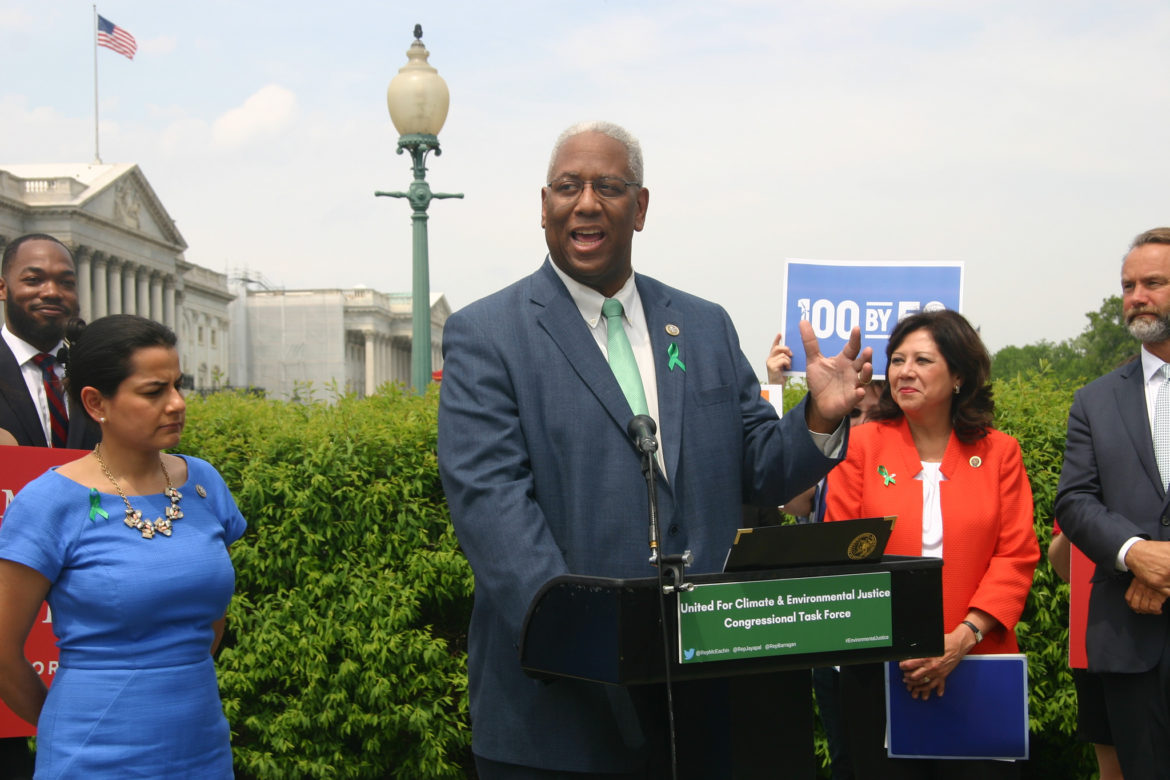 Rep. A. Donald McEachin speaks at an April 2017 event for United for Climate and Environmental Justice

The Virginia legislator who helped pull his home state along on advancing offshore wind is now trying to push the U.S. Congress to keep up with states on the full suite of clean energy.

Former state delegate Donald McEachin began his second term in the U.S. House of Representatives this month by re-introducing bipartisan legislation that would prohibit offshore drilling along the Mid-Atlantic Coastline.

And, the Virginia Democrat is deploying his new assignment on the House Energy and Commerce Committee as a bully pulpit for weaning the country of fossil fuels at an accelerated pace.

Thus, he is a natural fit to partner with the Justice First Campaign this week to speak at several environmental justice and energy events in Washington, D.C. The campaign is focused on trading fossil fuels for renewable energy, creating green-collar jobs that are the backbone of an eco-friendly economy, protecting forests and building a new energy infrastructure.

Campaign organizers view environmental justice and climate change as today’s civil rights issues. They sought to pay tribute to the legacy of the Rev. Martin Luther King Jr., who would have turned 90 on Tuesday.

On Dr. King's 90th birthday, I proudly rededicate myself to one of the most urgent civil rights issues of our time: #climatechange. https://t.co/TKWiUiVgLy

“I don’t know how to explain the fact that the states are in front of the Congress,” McEachin said in an interview with the Energy News Network after delivering prepared remarks Wednesday at the Library of Congress. “Hopefully we can pull ourselves together and supplement what the states are doing.”

He emphasized that while Washington doesn’t need to dictate state energy policy from on high, Congress can be supportive by ensuring states have the funding they need and are using science-based policy solutions.

McEachin, 57, first elected to Congress in 2016, represents a district around the capital, Richmond. As an eight-year member of the state House of Delegates, he advanced legislation that laid the groundwork for the 12-megawatt pilot offshore wind project that Dominion Energy is building with Orsted Energy of Denmark.

He’s proud of how Virginia is now leaping ahead with wind and solar, but admitted that the recent transition has been a long time coming.

Congress could keep the solar and wind boom going in Virginia and beyond by cutting subsidies to fossil fuels, prioritizing energy storage technology and keeping federal tax incentives for solar and wind projects alive. The latter are set to expire soon.

“I really want to champion it all,” he replied when asked what energy and justice issues he wants Congress to own.

McEachin noted that “chasing the bright shiny things” such as solar and wind needs to happen, but that under-the-radar investments in energy efficiency, home weatherization and coal ash cleanup near power plants are especially crucial in low-income and minority communities.

People with less, he said, shouldn’t be burdened with electricity costs they can’t afford.

For instance, Virginia’s largest coal ash pond is in Chesterfield County, in his legislative district.

“The governor has addressed it,” he said about plans presented by Democratic Gov. Ralph Northam. “But the challenge is that the ratepayer will still have a hefty bill to pay to remove that coal ash.”

He wants to act at the federal level to help Virginia and other states with coal-fired power plants that are stuck in the same situation.

“It’s necessary, we absolutely have to remove (the coal ash), but it shouldn’t be borne just by the ratepayers,” he said.

On the natural gas front, McEachin said he was troubled by a unanimous vote earlier this month by the Virginia Air Pollution Control Board. The board green-lighted a construction permit for a pipeline compressor station in Union Hill.

Some opponents have called it an example of environmental racism. The rural Buckingham County community was settled by free blacks and former slaves after the Civil War.

The station would serve as infrastructure for Dominion’s controversial $7 billion Atlantic Coast Pipeline. If built, it would bisect Virginia for roughly 300 of its 600 miles to move hydraulically fractured natural gas from West Virginia to eastern North Carolina.

“When you see a historic community like Union Hill having to deal with issues of that magnitude it does make you feel very empathetic toward them,” McEachin said. “We will continue to be vigilant.”