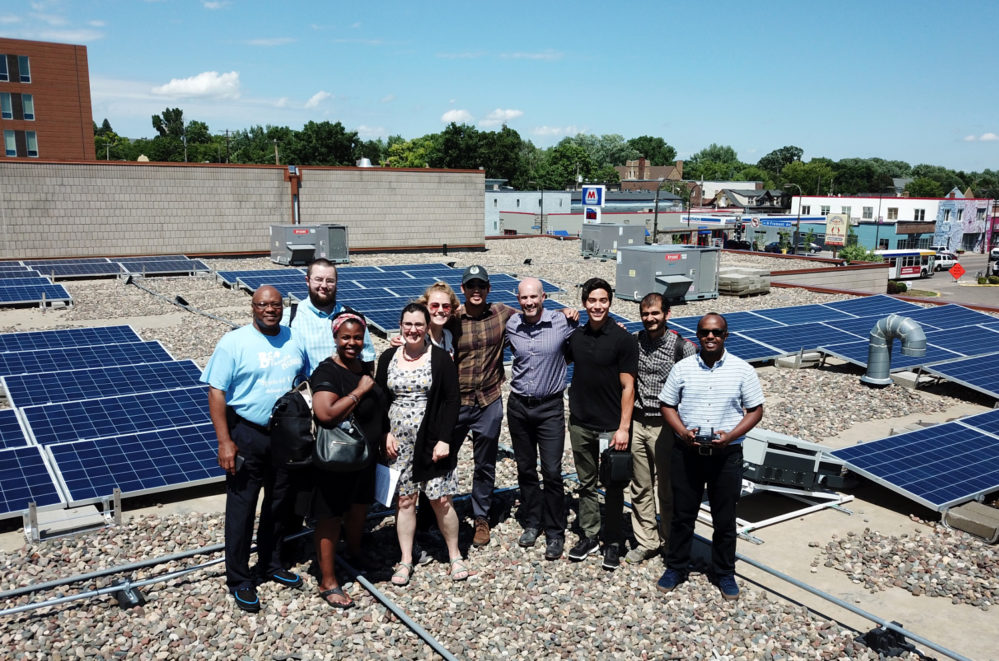 Representatives of the City of Minneapolis, Cooperative Energy Futures, Shiloh Temple, and Neighborhood Hub stand with other community members among rooftop solar panels installed at Shiloh Temple in North Minneapolis. 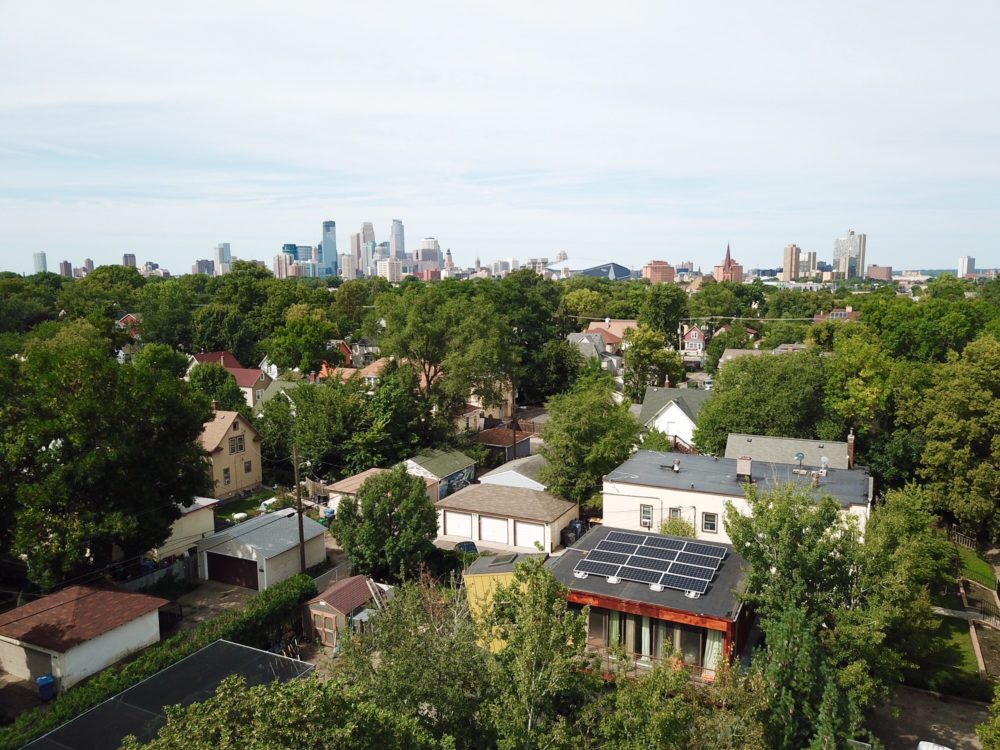 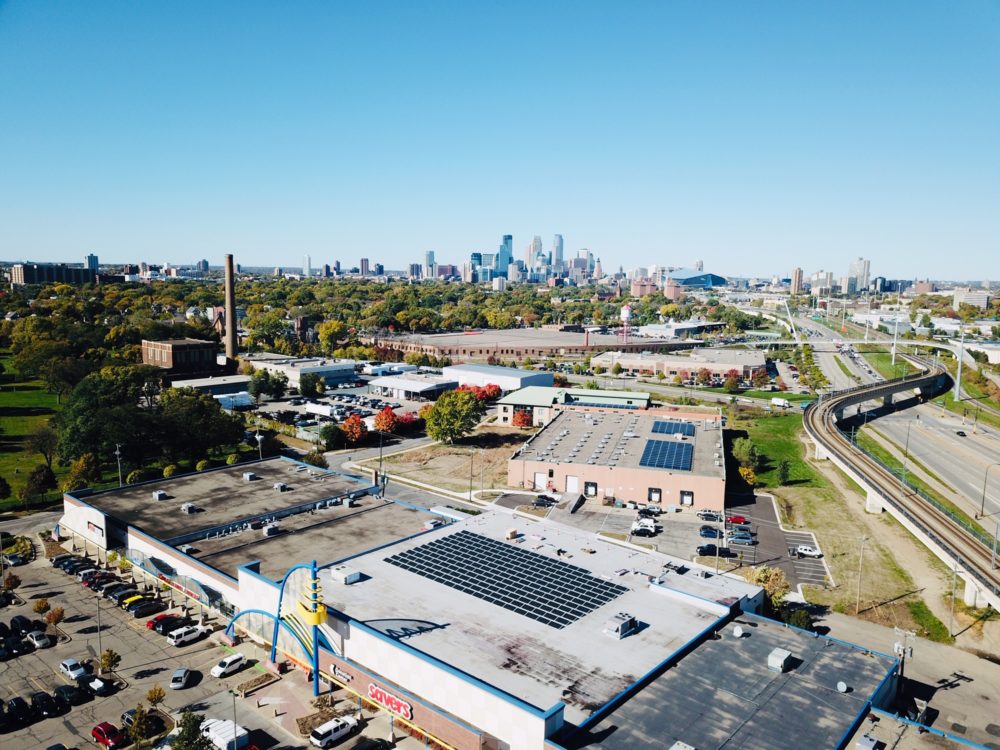 Minneapolis is starting to see an influx of solar installations in economically disadvantaged neighborhoods, an early result of a new program to target investment in those areas without displacing existing residents and businesses.

The city’s “green zones” program — years in the making and now finally taking shape — targets two areas of the city for special incentives intended to spur solar and energy efficiency projects, along with other priorities focused on healthy food and water.

“Our broad goals are promoting equity and preventing gentrification, improving the existing community — and not necessarily for any future residents,” said Kelly Muellman, the city’s sustainability program coordinator. “The focus is on existing businesses and residents.”

While the program is still in its early stages, more than 6 megawatts of solar have already been installed, raising hopes for energy efficiency programs and other measures. 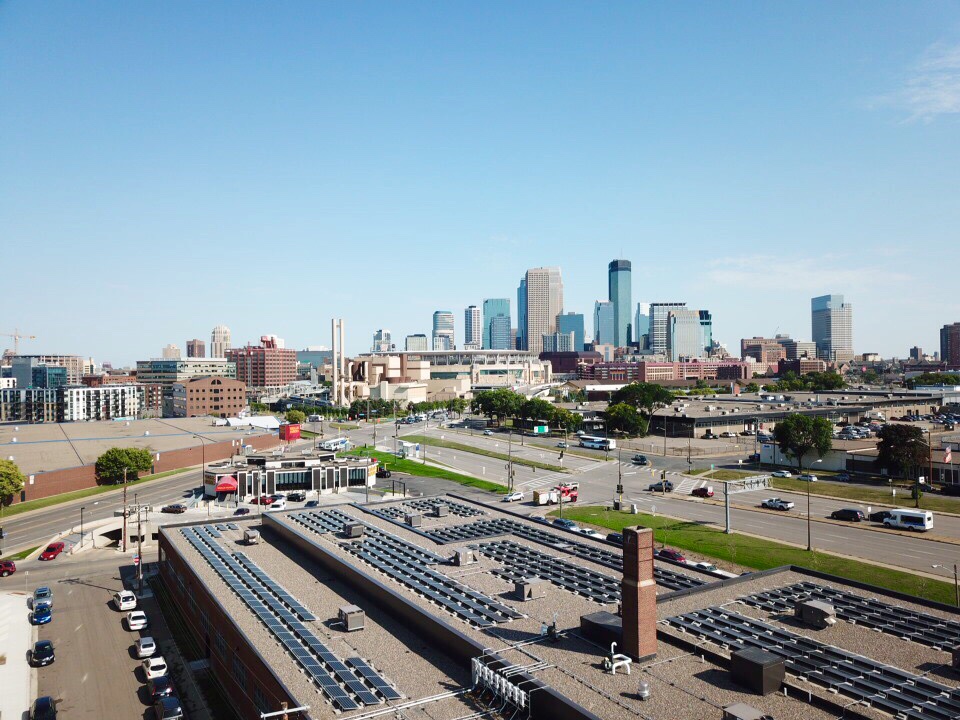 The Prodeo Academy, a public charter school in Minneapolis’ North Loop neighborhood, is among the organizations that have installed solar panels as part of the city’s green zones program.

Green zones were first created in California before spreading to Kansas City, Buffalo and a handful of other cities. The Minneapolis version came out of the city’s Climate Action Plan and was driven by environmental justice advocates. A few years ago, a Minneapolis city task force studied GIS data on air quality, health outcomes, race, soil contamination, employment rates, income levels, renter concentrations, food access, and many factors, Muellman said.

Two neighborhoods — North Minneapolis between Interstate 94 and the Mississippi River and the Phillips and Cedar-Riverside neighborhoods of South Minneapolis — were selected based on an analysis of pollution, health outcomes, income, demographics, and other data. The city recruited task forces in both areas to develop action plans based on what residents want to see done in their communities.

Proponents recognize that barriers are high and wide, requiring a push to overcome decades of discrimination, neglect and disinvestment in poor communities in Minneapolis and other major cities.

Cecilia Martinez, executive director of the Center for Earth, Energy and Democracy, said her organization helped lead the charge to create green zones.

“The challenges are that in terms of the energy planning and energy programming there is a huge gap and disconnect in terms of equity, planning and implementation,” she said. “The problem is we haven’t been able to be as inclusive in energy planning, renewable energy and energy efficiency service delivery to low income and people of color not only in Minneapolis but the rest of the country.”

Reaching those communities is difficult, Martinez said. Beyond the fundamental challenge of affordability, many homes are too poorly maintained to have the “efficiency readiness” for renovations, she said, and most programs require residents share the cost of improvements to participate. Tax subsidies and rebates may not be helpful or accessible to low-income households.

“It’s a multifaceted problem,” she said. 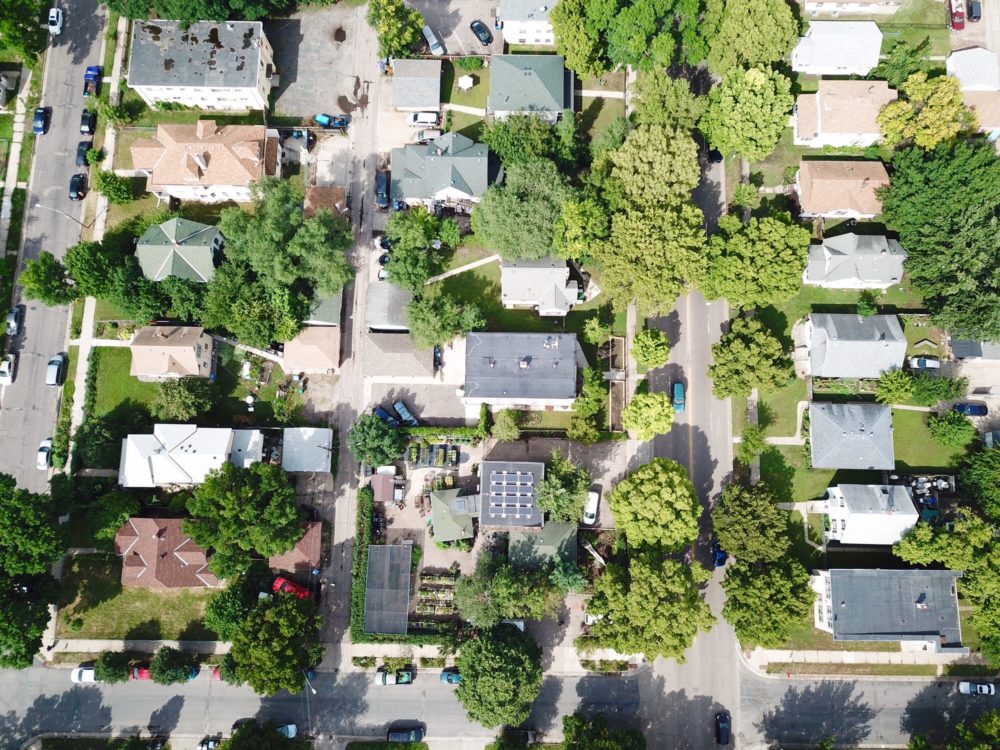 The Phillips neighborhood was one of two South Minneapolis neighborhoods targeted for solar development through the city’s green zones program.

Advocates in both green zones have been convening residents to get a sense of what they would like to see achieved and what concerns they may have as investments began to reshape their neighborhoods.

South Side activist Maryan Abdinur, the food, land and community program lead organizer at Hope Community Land Stewardship Project, said she and her staff reached out to more than 1,000 people over eight months while designing a strategy for the area’s green zone.

“What we learned in our process and listening sessions was the biggest fear was displacement,” Abdinur said. “The beauty of the green zones is that we can adjust them to community needs instead of the community adapting to it.”

What the organization learned is that people want to stay in the neighborhood while housing, parks and access to healthy food improves, she said. New housing, for example, should be required to be affordable to current residents.

“We want to build residents’ health and build their wealth,” she said. “It’s going to take a while.”

‘The beauty of the green zones is that we can adjust them to community needs instead of the community adapting to it.’

The fear of gentrification is legitimate. In Phillips, in the Southside Green Zone, more than 10,000 apartments changed ownership from 2010 to 2015, with unit prices increasing by 50 percent and rents by 11 percent, according to city documents. The North Side, despite issues with gang problems, has several pockets of growth that have led to its listing in on a few “hot neighborhood” lists in the Twin Cities. An industrial area known as the Upper Harbor Terminal is also being eyed for redevelopment.

Roxxanne O’Brien, a community activist in North Minneapolis, wants the city to consider “passing ordinances and laws which protect us from displacement and exploitation.” At the same time, she and other neighbors would like the Upper Harbor Terminal and other parts of the neighborhood to be powered at least in part by clean energy, have buildings certified as energy efficient and have an advanced energy plan.

Solar entrepreneur Jamez Staples is working to create a center in North Minneapolis to train residents for jobs in the solar industry. Profiled last year by the Energy News Network, Staples pointed out that the state’s burgeoning solar industry needs workers and Minneapolis has plenty of unemployed or underemployed residents who could fill those opportunities if offered the appropriate training.

“I think the green zones are a brilliant idea but I’d like to see more coordination around training and local hires,” Staples said. Last December he received a $1.6 million Metropolitan Council grant to help pay for a training center for jobs in clean energy, water and construction. The more residents with jobs, and income, the less likely they will be hurt by neighborhood improvements.

“Jobs help prevent displacement and empower people economically,” Staples said. “That changes the narrative around how you’re treated by the police and everyone else.”

Minneapolis sustainability manager Kim Havey added that the city is focusing existing efficiency programs on the green zones and adding efficiency efforts to non-energy initiatives. A lead abatement program now includes an energy evaluation by the city and an explanation of incentives to help landlords pay for efficiency improvements.

“It’s great to combine these programs together and bring in energy efficiency,” Havey said. “We can use a one-time visit to discuss a number of different things rather than having to schedule disparate meetings on different subjects.” 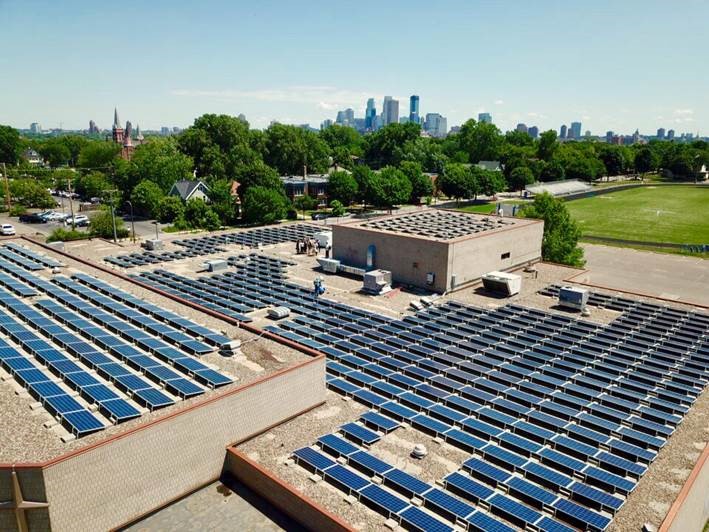 Solar developers and their clients are offering hints that the program may be beginning to work, with efficiency efforts to follow as more initiatives begin to take shape this year. Patrick Hanlon, director of environmental programs in the Minneapolis Health Department, said the two green zones hold only 14 percent of the city’s businesses yet consisted of 43 percent of Minneapolis’ solar installations last year.

“Those are areas where you’d expect to see less investment,” he said.

Businesses and nonprofits installed 6.2 megawatts of solar energy this year at 30 sites. Applications continue to roll in, he said, and solar on homes has become popular as the city has moved to allow developers to submit group purchases as one project. One lined up 19 installations. “I can’t wait to see the amount of solar affected by that policy, but I would guess it’s a fair bit,” he said.

Minneapolis provides solar producers an incentive both citywide and in the green zones. The idea is to use city money collected from utility franchise and pollution control fees to double and triple net metering fees for one year, Hanlon said. Green zone solar projects receive 35 cents per kilowatt-hour; the rest of those in the city get 25 cents per kWh. That’s on top of state and federal incentives.

‘Residents in those neighborhoods want a safe, healthy, livable community, just like anyone.’

Solar project owners receive money from the city immediately after the installation is certified — for a 10-kilowatt project, that brings in $4,200 in a green zone compared to $3,000 for the rest of the city. Solar developers can also pool together residential projects to take advantage of the program.

In both green zones, businesses signed on, along with a mosque, a training center for low-income residents, a shopping center, a landscape design firm and others. This year the city allows multifamily apartment buildings to receive solar subsidies and 18 projects have been lined up so far, with several of them serving low-income residents and veterans.

Wellington Management, Inc., which owns the Hi-Lake Shopping Center in the Southside Green Zone, installed an 80-kilowatt array last year. David Bergstrom, chief operating officer, said the solar will power parking lot lights. The subsidy program “made us say, ‘yeah, let’s go do it.’ It definitely made the project work. We had been playing with the idea of putting solar on the shopping center because we believe we need to do more renewable energy and we thought this was a perfect project.”

What Bergstrom likes is that the arrays are visible to light rail riders traveling on Metro Transit’s Blue Line. It serves as an advertisement for solar, as does another building Wellington owns next to the Blue Line that also has an 80-kilowatt array just a block away. While Wellington considered waiting a year to see if prices fell, Bergstrom worried that many grant programs “don’t always last, which also contributed to our making the commitment to adding solar.”

Multifamily housing owners this year also have an opportunity to receive a 90 percent match from the city for energy efficiency projects if they agree to maintain their affordability for a decade. They also receive similar solar incentives. “This drives down the cost for people living in these buildings by reducing utility costs,” Hanlon said.

The ambitious green zones plan does not now have a great deal of money behind it. Last year the Southside Green Zone Task Force received $75,000 from the city council for outreach and workplan development. The Northside Green Zone has access to a $600,000 settlement with North Metals, a metal shredding firm that has since moved out of the city. But consent decree money is targeted largely at helping residents with asthma and lead mitigation.

Muellman notes that plenty of existing programs are being tapped to help move forward energy efficiency projects. Green zone efforts are about linking current city, utility, state and nonprofit programs to residents within those neighborhoods. The city will know if it is successful if community surveys affirm the zones have broadened access to city services, added clean energy, made more efficient aging homes, offered access to the green economy and created a cleaner environment — all without gentrifying the neighborhoods.

A tall order, for sure. “Residents in those neighborhoods want a safe, healthy, livable community, just like anyone,” she said. “We think green zones can achieve that.”