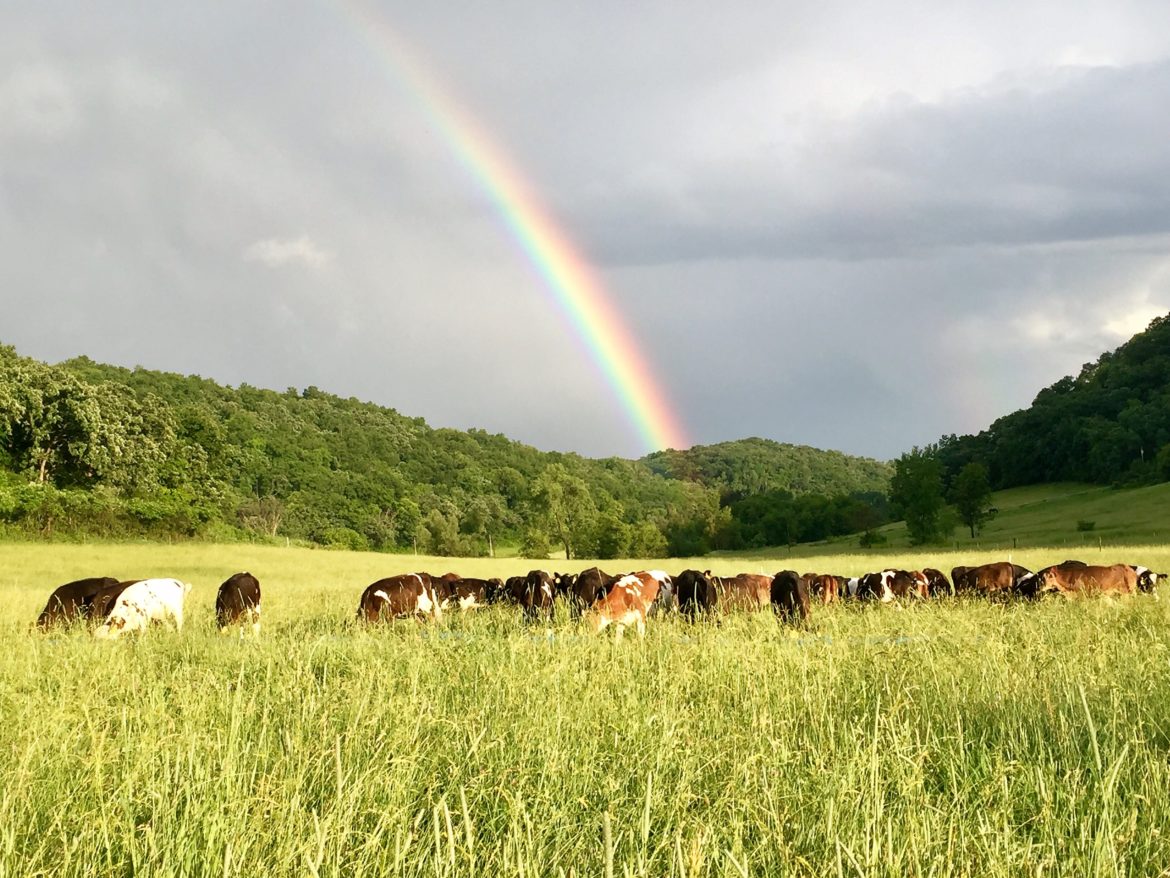 The proposed Cardinal-Hickory Creek line would run through central Wisconsin about a mile from the Cates family's grass-fed cattle operation. Dick Cates is among dozens of residents of the area who oppose the transmission line.

The Wisconsin Public Service Commission will in coming months determine the fate of a proposed 120-mile high-voltage transmission line stretching from Iowa to central Wisconsin, with scores of organizations and individuals preparing to weigh in during a series of public meetings.

Proponents of the proposed 345-kilovolt Cardinal-Hickory Creek line call it a crucial conduit for wind power to reach populated areas and increase grid efficiency; opponents call it an unnecessary and ecologically disruptive project that will benefit companies at the expense of ratepayers and could lengthen the lives of coal plants.

The Cardinal-Hickory Creek line would allow the transmission of an additional 1,300 MW between Iowa and Wisconsin and would provide “an outlet for approximately 25 gigawatts of wind resources in Iowa and areas west of Wisconsin and enable more than a dozen new wind facilities to fully interconnect to the electric system in areas west of Wisconsin,” ATC spokesperson Kaya Freiman said.

‘It’s hard to say yet whether this is a good investment.’

Now the Wisconsin Public Service Commission is tasked with, among other things, deciding whether Wisconsin ratepayers can be billed for the cost of constructing the Cardinal-Hickory Creek line, a decision that could make or break the project. In early January the commission decided to certify dozens of organizations and individuals as intervenors, with the power to cross-examine witnesses, and additional entities could still be added.

Fresh Energy, which publishes the Energy News Network, is an intervenor in support of the project (read our ethics policy here).

Stakeholders weighing in on the debate — the great majority opposed to the transmission line — include farmers, citizens groups, conservation organizations, clean energy advocates, and a number of Amish residents whose barriers to using electronic filing create a unique challenge in the process.

“The legal standard for the Public Service Commission of Wisconsin to approve a new transmission line is that it must be needed,” but the commission has recognized that Wisconsin has a power surplus, said Howard Learner, executive director of the Environmental Law & Policy Center (ELPC), which is representing two groups opposed to the transmission line. “The Cardinal-Hickory Creek transmission line is not needed for viability to keep the lights on in Wisconsin, period.”

The Clean Grid Alliance, whose members include the ELPC, is supporting the proposed line. Alliance executive director Beth Soholt said the group’s analysis shows about 4,000 MW of wind power and some solar is dependent on the proposed line to reach customers at full capacity. (Some of that power reaches customers even without the line.)

“It’s not a wind-only line, it’s an open access line — carrying fossil generating capacity as well as wind power,” Learner said. “If you ask the obvious next question, what is the mix of power — who knows?”

Freiman said that while “on a given day, and even moment-to-moment,” the mix of energy on a line shifts, “the amount of power generated by different sources is changing over time as older coal plants are being retired and more wind generation is being brought online.”

“This changing generation mix is one of the primary reasons the Cardinal-Hickory Creek Project is being proposed,” she said.

Dairyland Power Cooperative, an electric generation and transmission organization with members in Illinois, Iowa, Wisconsin and Minnesota, is a 9 percent owner in the project. “Dairyland has a strong wind and solar portfolio and we have plans to continue expanding our investment in renewable energy resources in the near term,” said spokesperson Katie Thomson. “Cardinal-Hickory Creek will allow significantly better access to new and upcoming cost-effective renewable energy.”

Many clean energy advocates are calling for investment in more localized distributed energy and storage rather than long-distance transmission lines.

With distributed generation “you don’t get the economies of scale, you don’t get the competitive prices, you can’t reduce carbon as quickly,” she said. “So there is a need and a role for these large-scale projects.”

Since the Wisconsin Public Service Commission is meant to regulate how utilities in the state can charge their customers, the Wisconsin Citizens Utility Board (CUB) and others say the main issue should be whether electricity transmitted on the proposed transmission line is needed in Wisconsin.

Since Wisconsin has a surplus of energy, opponents say the additional energy is not needed, and customers shouldn’t be billed for it. Under MISO cost-sharing policies, Wisconsin consumers would be billed for their share of the electricity carried on the line, which would be about 15 percent, according to CUB executive director Tom Content.

CUB has not taken a final position on the issue yet, Content said, and the group is seeking funding from the Public Service Commission to hire an expert to study need and cost.

“Our main concern is just making sure the line is really needed, and what alternatives there could be if you had x millions of dollars to spend,” Content said. “We haven’t had electricity sales growth in a long time. The economy has recovered but electricity sales haven’t gotten back to where they were before. It’s hard to say yet whether this is a good investment.”

Soholt said electricity needs in the state can’t be separated from the larger regional market in which it exists, and Wisconsin utilities are impacted by regional market trends.

“These lines weren’t specifically designed to meet load growth — that was not the only criteria for new transmission” recommended by MISO, she said. “Even though we’re in a state regulatory process, there’s a regional aspect to the market. Things are so fluid and happening all the time, the only trend we’re pretty certain is going to continue is the trend for wanting more clean, renewable energy.”

Freiman pointed to the closures of four coal plants in Iowa and Wisconsin. “Losing those electricity supplies means utilities need access to other sources to reliably meet their electric needs,” she said. “Transmission lines are critical for ensuring that sufficient electric power is available to serve the industries, businesses, schools, hospitals, farms and homes in the region.” 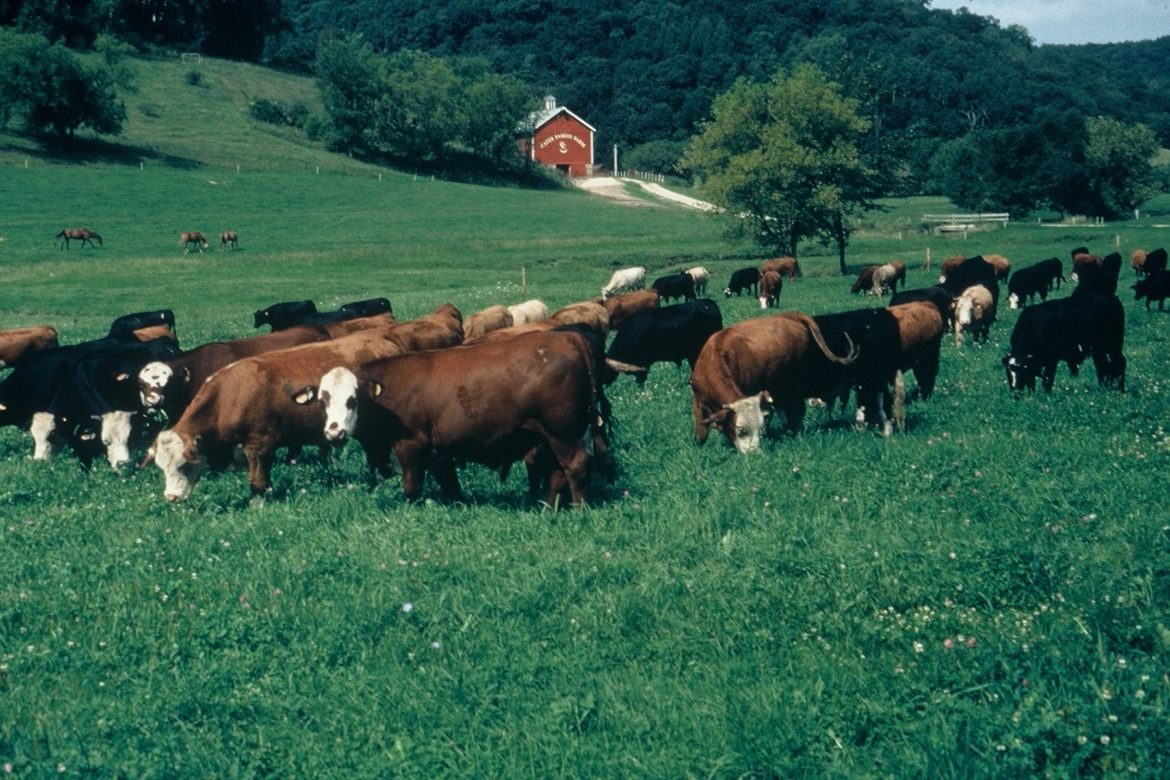 Central Wisconsin resident Dick Cates, whose grass-fed cattle operation sits about a mile from the proposed Cardinal-Hickory Creek line, says his opposition to the transmission project is “not just an in-our-backyard kind of thing.”

Dick Cates’ family has run a grass-fed cattle operation in central Wisconsin for more than a half-century.

Cates and many of his neighbors feel the proposed transmission line would have a serious impact on the ecology, mood and economic prospects of the region, disrupting wildlife and views and potentially deterring tourists.

The line would run about a mile away from Cates’ farm, he said, but “it’s not just an in-our-backyard kind of thing. We really feel that sort of transmission of power through our state is not necessary for the amount of power being used and the environmental impacts it will have.”

Cates and his wife took over the farm from his father three decades ago, and more recently passed it on to their son.

“They have a whole network of young people who are doing innovative things on the farms — making their own cheese, direct marketing their beef or pork products, growing heirloom small grains, B&Bs, wedding venues,” Cates said. “Every one of those enterprises depends on our unique environment, on people wanting to come to our area. Some of those businesses will be directly underneath the line. Not that I’m in any way a Luddite or against development — I just feel in our particular area we have the potential of repopulating our younger generation if we keep the landscape as it is.”

Retired doctor Michael McDermott moved to rural, picturesque Vermont, Wisconsin, after years heading the emergency room at Chicago’s public hospital. He chairs a citizens committee that surveyed almost 300 locals about the transmission line, and found more than 80 percent opposed it. Nearby dairy farms, a beekeeper and a medivac helicopter operation would be among the entities affected by the transmission line in their area, he said.

“It’s an antiquated way of doing business, with no real plan as to how to shift to a different system,” McDermott said. “We know energy efficiency is by far the best bang for the buck. But when you look at the application and draft [environmental impact statement], everything including the examination of alternatives is looked at from the assumption that the high-voltage transmission grid system is the only way.”

Groups including The Nature Conservancy have documented the impact the line could have on ecosystems and wildlife, including in the “driftless area” of Wisconsin where glaciers didn’t scour land flat as in neighboring areas.

“We wouldn’t contemplate doing something like this in the Grand Canyon,” said David Clutter, executive director of the Driftless Area Land Conservancy. “People don’t understand or appreciate the value of this landscape out here. It’s a special place and it needs to be protected.”

Residents say that for long-time farmers like Cates or “ex-pats” escaping cities like McDermott, the line would change what they love about the state. But most stress their opposition is not rooted in NIMBYism.