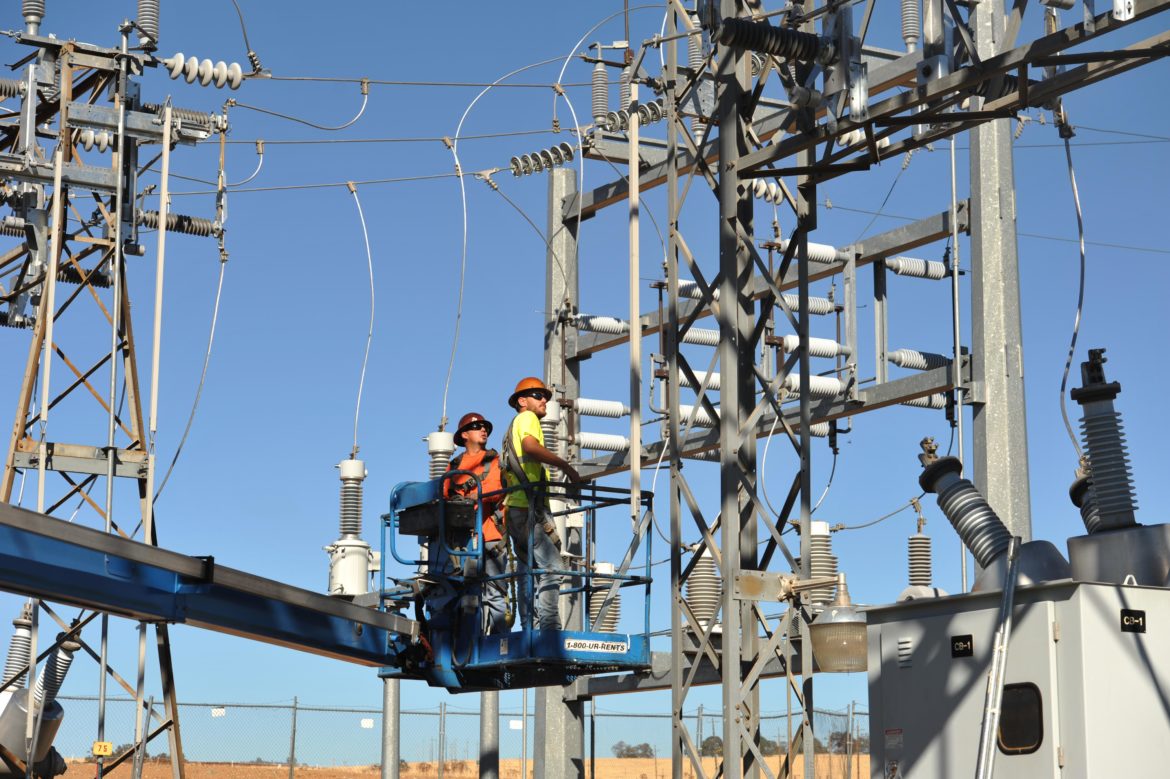 Contractors work on electrical substation renovations at Beale Air Force Base in October 2017.

Smart grid upgrades may offer less risk in some areas, but experts say conventional transmission projects are still needed in others.

Back in 2011, MISO approved plans for a massive 17-line transmission project that spanned from Montana to Ohio. While it reviewed the plan, the regional grid operator, which manages the electric grid in a corridor from the Upper Midwest to the Louisiana Gulf Coast, juggled three separate and thorny issues.

The grid needed strengthening in places, but other areas were congested. Additionally, local and state governments were adopting a range of renewable energy requirements, all of which they needed to be prepared to meet.

“They came up with new transmission lines that serve multiple purposes,” said Beth Soholt, executive director of the Clean Grid Alliance, calling it a “no regrets” solution.

Smart grid upgrades offer less risk and more flexibility than power lines in some circumstances. But for all the promises of microgrids to bolster the electricity grid in certain scenarios, much of the country still has a huge need for conventional transmission projects to advance the clean energy transition.

The MISO project, commonly called the Multi-Value Project Portfolio or MVP, illustrates this need, and it contributed to a growth of renewables too. Wind farms rise alongside it.

“Moving renewables is a primary reason for needing new transmission,” Soholt said. “Sometimes there are circumstances where there is no other alternative. We can’t energy-efficiency our way out of the need for transmission. We can’t microgrid our way out of it. Maybe we’re going to be able to store part of it, but there’s no other solution.”

Different regions call for different approaches, and in some places in the Midwest, experts maintain there’s still a need for transmission expansion to deliver the amount of wind and solar necessary to decarbonize by mid-century.

Different strokes for different regions. In the Midwest we need major transmission expansion to deliver the amount of wind and solar necessary to decarbonize by mid century. NWAs are great for optimization but in no way a replacement for Tx in the Midwest https://t.co/yzmdNdSSmX

“In the Midwest, we have a very good wind and solar resource,” Soholt said. “There is a zone in the Dakotas, Minnesota, Iowa that is really, really rich for renewables and very cost-effective to do projects. The more of that we develop and try to utilize in our regional power grid we’re going to have very cost-effective renewable generated electricity.”

Still, the equation for transmission planning is changing, and there is now a range of options for building transmission infrastructure that can attract investment and ensure the public interest.

“There’s not a utility executive room in this country that isn’t wrangling with this issue,” said Benjamin Stafford, director of policy and public affairs at Clean Energy Economy Minnesota. “They are saying, ‘We used to look at this as a transmission solution, but maybe that’s not the least risky move for operations and finance.’”

Planners are looking at the portfolio of infrastructure options differently. “Where does the microgrid fit?” Stafford said. “Where is a transmission solution necessary? Where might we avoid big, long-term discussions, and how do we evolve to meet the economic and public interest obligations?”

The ideal is to send lots of power from wind or solar farms located in less-populated areas — where projects are cheaper to build and natural resources more abundant — to cities and industrial centers with high power needs.

‘Moving renewables is a primary reason for needing new transmission. Sometimes … there is no other alternative.’

However, building long-distance transmission projects can often be controversial. Transmission lines are permitted at the state and local level, which makes multi-state projects complicated to approve (in contrast, it’s one-stop-shopping with the Federal Energy Regulatory Commission for pipelines).

Utilities largely maintain that even with a growing demand for distributed energy resources, more transmission projects are still needed and can streamline the delivery of power from renewable sources that generate intermittently — during sunny or windy days, for example. More affordable renewables are still constrained by insufficient transmission.

“We still have to get from here to there,” ComEd Executive Vice President Terence Donnelly said during a talk at the University of Chicago last year.

But, in the past, utilities haven’t paid attention to the efficiency of the wires that run from power plants to their customers, according to Dave Bryant, director of technology at CTC Global, which manufactures high-capacity conductors.

In some cases, the costs of lost power are passed onto customers, and with a healthy rate of return on capital projects, utilities might be incentivized to tear down an entire system and replace it with new equipment before making an upgrade (although regulations and competition make this less common today).

Bryant argues for upgrading the grid with modern conductors, which can increase the capacity of already existing transmission lines. His company manufactures high-temperature, low-sag cables which they say can reduce power losses by 25 to 40 percent.

“It’s all leading to a more robust system that will provide more reliable and efficient and clean energy, and one that’s increasingly affordable,” he said.