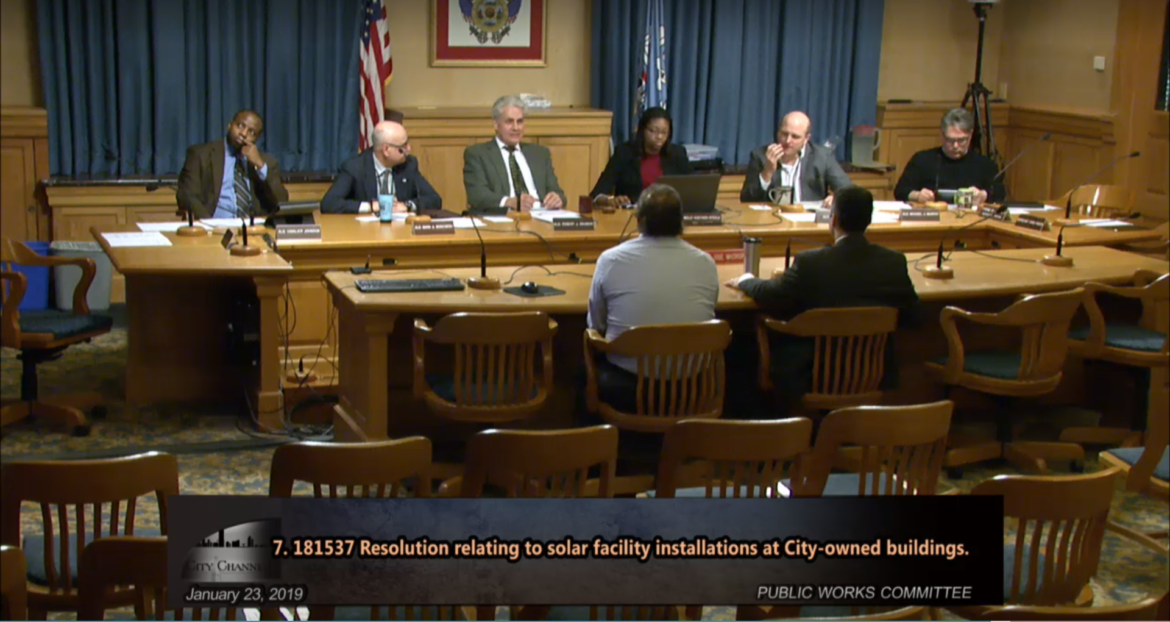 Outspoken members of Milwaukee’s city council appear determined to reject We Energies’ proposal to install solar on six city buildings, saying the utility is misinterpreting state law in trying to prevent it from working with a third-party developer.

“Hell will freeze over before I vote for doing business with We Energies,” said council member Robert Bauman during a Jan. 23 public works meeting.

The city has since 2017 been seeking to develop the 1-megawatt solar project through a third-party ownership agreement with solar developer Eagle Point. In the fall, We Energies told the city that it would consider such an agreement as Eagle Point illegally acting as a public utility.

At the same time, We Energies proposed the city lease space to We Energies for it to develop its own solar, under a pilot program called Solar Now that was recently approved by the state Public Service Commission.

Council members see We Energies as intentionally “misinterpreting the law” — in the words of council member Nik Kovac at the recent meeting — in order to pressure the city into participating in its program. Discussion on Jan. 23 and at a public works meeting on Jan. 3 indicated that council members on the Public Works Committee will not agree to participate in Solar Now. The Public Works Committee would need to pass any such proposal before it goes to a vote before the full council.

Instead, council members on the committee are debating whether to pay upfront for the solar panels — forgoing the 30 percent federal tax credit that the third-party arrangement would have allowed them to reap — or whether to challenge We Energies through the Public Service Commission, and possibly the courts, in hopes of moving forth with the third-party ownership arrangement.

Eagle Point president Barry Shear told the Energy News Network that he may file a lawsuit or otherwise end up in a legal battle with We Energies.

In an Iowa case that went to the state Supreme Court, Eagle Point prevailed in a dispute with Alliant Energy over third-party ownership, with the Supreme Court ruling it was legal.

“Basically I’m going to be doing the same thing as in Iowa, because they’re wrong on the law,” Shear said. “They’re essentially blocking guys like me from doing any business with municipalities. The reason I do power purchase agreements and third-party ownership is not because I want to own [the solar installations], it’s because cities are always strapped for cash” and arrangements that allow them to tap tax credits make solar viable.

In an emailed response to questions, We Energies spokesperson Amy Jahns did not directly address the Eagle Point proposal or council members’ criticism of the utility, but said, “so far neither the Public Works Committee, much less the full council have taken a vote on this. What I can tell you is that we are committed to working with the city of Milwaukee to meet their renewable energy goals in a cost effective manner.”

On Jan. 24, We Energies Executive Vice President Robert Garvin sent a letter to Bauman describing the benefits of the Solar Now program and another solar pilot program being undertaken by the utility, and said the Solar Now program would allow the city to avoid $1.5 million in upfront costs for its planned project.

The letter said, “At both the Jan. 3 and [Jan.] 23 proceedings, the committee held information sessions on this topic. Options ranged from the city financing the purchase of its own solar panels at a cost of over $1.5 million, to the potential of partnering with our company, We Energies, to advance renewable energy investment in the city.” It did not mention third-party ownership as an option.

During the meeting, Bauman criticized the reluctance of some city officials to borrow or otherwise spend money to put the project in motion.

“I guess the message here is we’re all for the Paris Climate Accord unless it costs us something,” Bauman said. “There’s more than just financial costs and benefits to consider, there’s a moral issue — we’re looking at an existential threat and we’re quibbling about costs and benefits.”

There is urgency to the decision, as thousands of solar panels are sitting in a city warehouse “collect[ing] dust,” as Bauman put it. City Director of Environmental Sustainability Erick Shambarger told the council committee that Shear has given them a deadline to resolve the issue or he will move the panels, since he is “losing money” as the panels sit unused.

‘Putting that pelt on the wall’

The debate has underscored calls by Wisconsin clean energy advocates for clarity on the legality of third-party ownership in the state. Third-party ownership arrangements with public entities are moving forward elsewhere in Wisconsin, including in Alliant Energy’s service territory in Sauk County, council members noted.

We Energies has been especially resistant to third-party ownership, trying unsuccessfully in a 2014 rate case to ban such arrangements outright, while also imposing other obstacles on distributed solar development. Council members said We Energies’ recent track record is a reason to refuse to participate in their solar pilot.

Kovac also referenced a controversy stretching from 2013 to 2016 over who would pay to relocate utility lines during construction of streetcar tracks. Kovac said 90 years of Wisconsin case law indicated the utility should pay, but after a new law being passed and a failed court challenge, the city ended up paying.

“The fact they [We Energies] deliberately misinterpreted the law for their own advantage is not a controversial statement, it’s fact,” said Kovac. “They’ve done it before, they’re doing it now. Especially when they sweep in and offer their own deal … There’s a value in putting that pelt on the wall and saying, ‘See, they’re liars again.’

“The idea of challenging them in court is a good plan B or maybe a plan A, but in the meantime they’ve succeeded in preventing solar panels from being installed,” Kovac continued, saying We Energies wants to thwart solar “until their coal plant depreciates, then they will be all for solar.”

The Jan. 23 meeting ended with Public Works Committee members unanimously voting to revisit the issue after the administration considers the costs and benefits of borrowing money, spending available contingency funds or other financial options.

Paying for the solar installation out of the city’s contingency fund would use up about a third of the city’s total contingency budget for the year, members noted. Borrowing would avoid such spending but would involve risk based in part on the uncertainty of energy savings over time, including factors like the price of energy, the city’s energy use, the panels’ performance and the demand charges imposed by We Energies on solar installations.

Bauman said the amount that would need to be borrowed — about $1.6 million — would be minor compared to the city’s total debt load and urged the city to move forward quickly. The total cost of the project is estimated at $1.8 million, and $200,000 in state Focus on Energy funds could be tapped, Shambarger said.

“To have solar panels sit in the warehouse is about the craziest thing I’ve heard,” Bauman said at the hearing. “We’ve been advertising this program, we’ve been touting it, we’ve been out there. [If the project is not built soon], that’s not much of a commitment to climate change.”