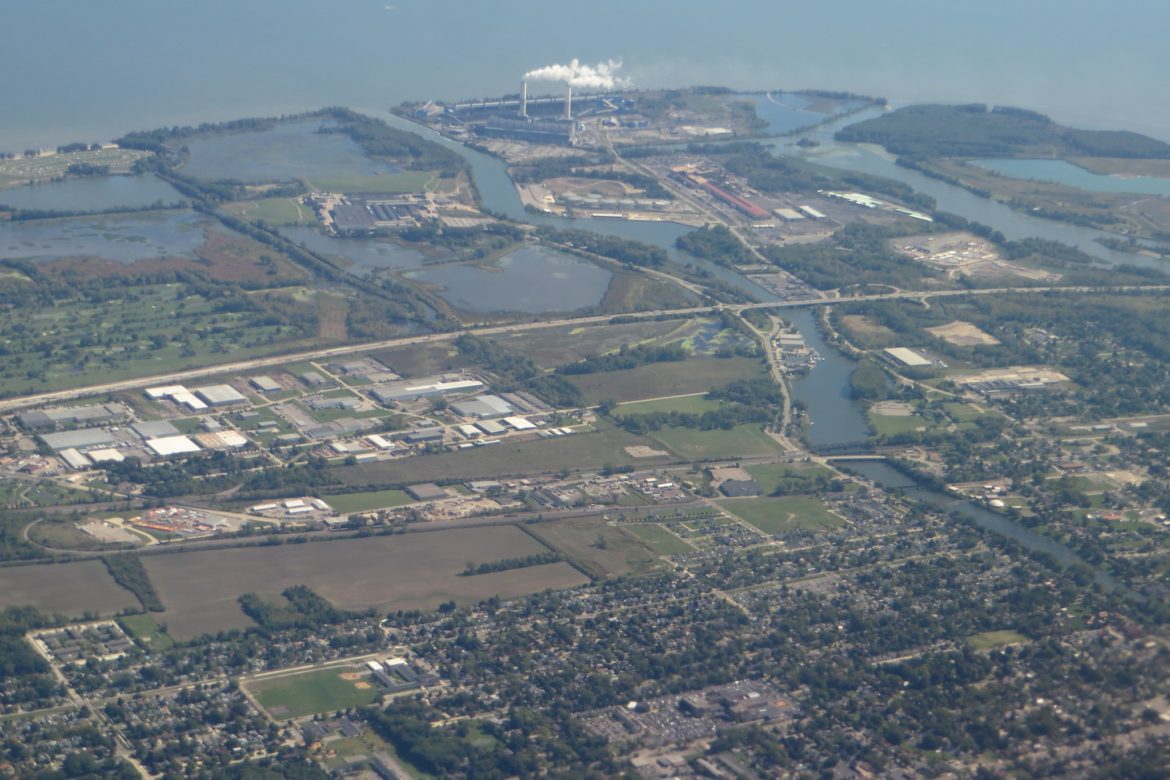 DTE Energy's Monroe Power Plant, located on the western shore of Lake Erie along the River Raisin, generates more than half of Michigan's coal ash waste.

Groundwater contamination has been detected at a majority of the state’s 37 coal ash ponds, some of which are unlined.

Environmental groups opposed an earlier version of the bill they said would have done little to address contamination and was weaker than federal requirements.

Michigan has 29 coal ash waste units that include 37 coal ash ponds, a majority of which show groundwater contamination levels exceeding federal standards for pollution like arsenic and lead, the Michigan Environmental Council reported last year. Major utilities DTE Energy and Consumers Energy are taking steps to close some of these sites.

Meanwhile, the state Department of Environmental Quality has been addressing historical contamination at six coal combustion residuals sites across the state, more than half of which closed in the 1990s.

The environmental group’s findings were based on well monitoring required under a federal law passed in 2015. The DEQ says additional monitoring has started at three sites since then. A second round of testing expected soon will determine utilities’ next course of action on contaminated sites if they’re not in the process of closing already. Ultimately, the coal ash sites could be forced to close if groundwater contamination persists.

“This creates a state program so the DEQ has a role to play in overseeing these toxic sites,” said Charlotte Jameson, the Michigan Environmental Council’s energy policy and legislative affairs director.

The council didn’t fully support the final bill but took a neutral position. Other advocates hope for more localized solutions to contaminated properties, particularly those with an environmental justice component.

A map shows, in orange, the approximate locations of six sites at which Michigan’s Department of Environmental Quality has been addressing historical contamination. The DEQ says additional monitoring has started at three sites, in blue, since then. Click on each site for more details.

The law creates a permitting program — funded by fees on utilities — with requirements for existing and new coal ash facilities. The DEQ estimates the new law would impact 15 existing facilities. The law requires utilities to stop sending coal ash into sites within six months if high levels of toxins like mercury, lead and arsenic are found in the groundwater. It also requires any new coal ash storage sites to have synthetic liners.

Jameson said if Michigan’s program is approved by the U.S. Environmental Protection Agency, the state could have a say in where monitoring wells are located and potentially trigger cleanups.

“We think there’s a lot of room for improvement,” Jameson said.

And if Michigan wants stricter rules than the federal government’s, the state would have to make the case of why it’s necessary based on a lame-duck law signed by Snyder preventing “no-stricter-than-federal” state regulations. Jameson believes “protecting groundwater” would show why it’s necessary.

The environmental law advocacy group Earthjustice has reported at least 70 coal plants in 22 states have excessive levels of groundwater contamination from coal ash, including Michigan.

While Michigan utilities are in the midst of closing most of their coal plants, unlined coal ash sites remain a lingering problem. The Michigan Environmental Council identified multiple sites owned by Consumers Energy that no longer have an operating coal plant but still contain elevated levels of groundwater pollution.

DTE spokesperson Eric Younan said high lead levels were reported at Belle River soon after wells were installed in 2016 and the results were “not repeatable and determined to be not representative of groundwater quality in the aquifer.”

“These exceedances occur directly adjacent to ash ponds, but are within the site property boundaries and are not located near any sources of public drinking water,” he said.

He added that pollution levels at the Karn site “have decreased over time,” and the pond is scheduled to be closed this year.

Wheeler said Consumers is in the process of closing all of its unlined coal ash sites, with the last one closing by 2023. The company no longer sends coal combustion residuals to these sites, instead sending them to concrete tanks and double-lined ponds or landfills, or reusing the waste, he said.

“Consumers has preemptively initiated closure activities for all of its existing bottom ash ponds and will complete response action plans to address groundwater impacts in compliance with the new state permitting program,” Wheeler said.

Younan added that DTE “routinely tests the groundwater around all our clay-lined ash storage units and have not detected any issues or concerns. We also perform regular inspections and third-party professional engineers inspect our sites annually for safety and stability.”

While contamination findings may trigger coal ash site closures, Jameson said several off-ramps are available for utilities to delay that process, such as showing the utility doesn’t have capacity elsewhere for the waste.

“That’s a positive thing we can do with this waste,” she said.

“Other states have no regulation of these facilities,” he said. “We’ll continue to permit these and manage any releases that have occurred, just like we would any other site.”

While state and federal coal ash rules are targeting groundwater contamination, Jameson said a “big question mark” around the rules is how drinking water is being affected.

“We don’t have good data on that,” she said. “We’re hoping this can be a piece of the puzzle, too.”

Detroit: A lesson from petcoke

Detroit environmental justice advocates have been following coal ash contamination for years, saying it’s similar to issues the city faced with fugitive dust from storing petcoke — a byproduct from oil refining — along the Detroit River.

A Detroit City Council member spent more than three years attempting to regulate the bulk storage and transportation of the material, facing industry pushback along the way. After community pressure, the city adopted an ordinance regulating “carbonaceous material.”

Wibke Heymach, policy and program manager with Detroiters Working for Environmental Justice, said coal ash could be dealt with in a similar, localized way.

“In Detroit, the way sites are located means that we not only pollute our most vulnerable neighborhoods but also with the closeness to the river, we pass that on,” Heymach said. “A lot of the time we’re looking at local solutions and working directly with the city when we can’t quite get there on a federal or state level. Petcoke is a really good example of how it worked to solve something locally.”

DTE Energy has five coal plants in southeastern Michigan, including the River Rouge plant in southwest Detroit. Younan, the DTE spokesperson, said the company has detected low levels of arsenic in groundwater at the site.

He added that drinking water is not affected and “there was no public risk. A permanent water management solution that exceeds regulatory requirements was implemented and is capturing groundwater and sending it to a wastewater treatment plant.”

DTE’s Monroe plant, about 40 miles southwest of Detroit, alone generates more than half of the coal ash waste in Michigan. Waste from the plant is sent to a landfill or containment ponds or is reused in cement products, Younan said.

However, DTE does not have a closure date set for the Monroe plant.

“If over half of our waste is coming from one plant we don’t have a closure date on, we’re going to be dealing with coal ash waste for a long time in Michigan,” Jameson said. “Which is really unfortunate.”