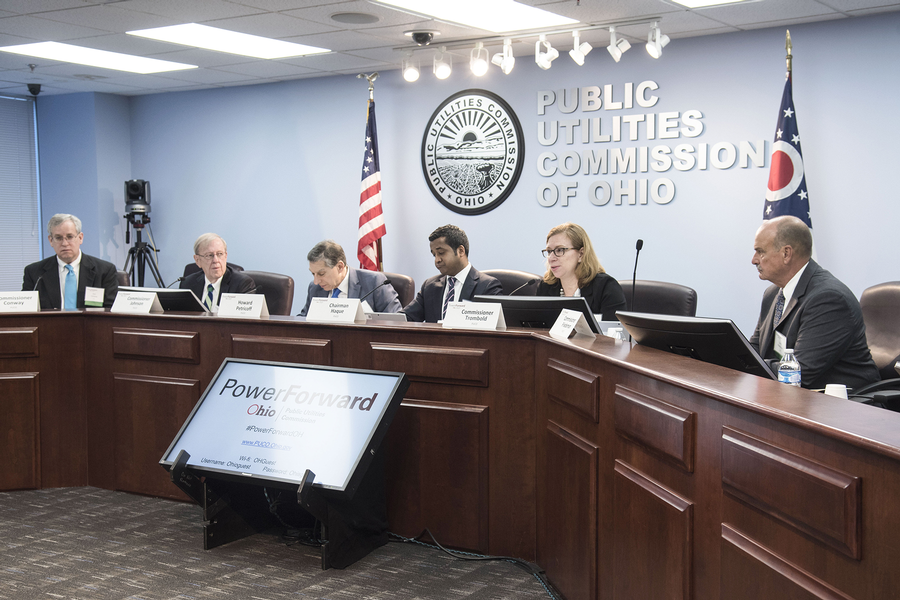 A committee narrowed down a field of candidates for the Public Utilities Commission of Ohio to four finalists.

The four candidates nominated Thursday for a vacancy on Ohio’s Public Utilities Commission include a longtime clean energy critic, two attorneys with consumer advocacy backgrounds, and an appellate court judge.

Gov. Mike DeWine’s choice to fill the seat will have a say in decisions ranging from the cost of electricity in the state to matters affecting the growth of clean energy, energy efficiency and grid infrastructure.

Sam Randazzo has spent more than 25 years as general counsel for Industrial Energy Users-Ohio, an organization that has lobbied to scale back or eliminate clean energy standards in the state.

The organization’s website has characterized the state’s renewable energy and energy efficiency standards as a hidden energy mandate tax on electric bills. Randazzo provided input to the office of Ohio Rep. Bill Seitz, R-Cincinnati, for drafting a 2016 bill to push any additional enforceable requirements under the state’s clean energy standards out for another two or three years. IEU-Ohio has also provided legislative testimony aimed at supporting bills to restrict the state’s clean energy standards.

Randazzo has criticized wind and solar energy for “obvious reliability-related problems.” They “don’t show up for work” and “can’t be made to show up for work,” he wrote in a 2018 IEU-Ohio report.

Outside his work for IEU-Ohio, Randazzo has represented opponents to wind farm turbines before the Ohio Power Siting Board. One case dealt with a specific wind farm. In another proceeding, he urged adoption of rule language that could have applied the state’s current strict setback requirements even more harshly.

Randazzo is not formally affiliated with a political party. Over a 17-year period, however, he gave about two-thirds of roughly $194,000 in campaign donations to Republican candidates, according to FollowTheMoney.org. He did not respond to an email seeking comment on why he wants to be a commissioner and what he hopes to bring to the commission.

Gene Krebs and Bryce McKenney both are Republicans with strong ties to the Office of the Ohio Consumers’ Counsel.

Krebs served as a member and then chair of the Office of Ohio Consumers’ Counsel Governing Board from 2005 through 2017. McKenney has been an attorney at OCC for about a year. Previous positions include a five-year stint as a staff attorney and then hearing examiner at the PUCO.

The OCC generally opposes subsidies for electric generating facilities, which cuts both ways for renewable power companies. For example, the OCC opposes letting American Electric Power charge its Ohio utility customers for a proposed solar farm to be built in Appalachian Ohio.

At the same time, OCC has fought vigorously against “bailout” subsidies to noncompetitive coal and nuclear plants. And it raised questions about what FirstEnergy did with money from a so-called Distribution Modernization Rider that was meant to prop up the company’s credit ratings.

Consistent with those positions, the OCC supported failed House Bill 247, which would have done away with electric security plans and various rider charges and expressly authorize refunds of rate payments that are eventually ruled to be unlawful. The bill would have also prohibited utility ownership of electric generation facilities.

OCC has acknowledged the value of energy efficiency, but has also advocated for a spending caps under the state’s standard. It has criticized various provisions as letting utilities profit from energy efficiency programs at consumers’ expense.

“The next commissioner should be someone who has been a bona fide consumer advocate for the hardworking people of Ohio,” said OCC spokesperson J.P. Blackwood. “Already, two of the five PUCO commissioners are former utility representatives. That is more than enough from the industry.”

“It is our preference for Ohioans that, among other things, their PUCO commissioners be people other than former officials of the utilities [and other industries] that the PUCO regulates,” Blackwood added.

Dennis Deters has served as an appellate court judge for the greater Cincinnati area. Prior to that appointment in 2017, he had been in private law practice and had done a two-year stint as a county commissioner for Hamilton County. His likely positions on specific clean energy issues are unclear. Deters is a registered Republican.

The nominating committee’s announcement of the final four candidates came soon after a series of 20-minute interviews Thursday morning with nine semi-finalists chosen from a field of 23.

“We had a lot of really good applicants this time,” said Chair Mike Koren, serving as the governor’s representative on the committee.

Among the runners-up was economist Noah Dormady, who describes himself as “an expert in auction theory and the design of auction-based markets.” “There are many attorneys but no economists on the commission,” the Ohio State University professor said after the semi-finalists were announced.

Dormady has criticized Ohio’s electric security plans, which he sees as a major factor in the state’s high electricity costs compared to other states. His failure to make the final four likely moots a challenge to his testimony in the AEP solar case as an independent expert for the OCC.

Former Ohio Department of Agriculture Director David Daniels likewise didn’t make the cut. Daniels was replaced in that position by Gov. John Kasich in October 2018, amid speculation about a clash over the governor’s policies to cut down on levels of nutrients washing from farm fields into Lake Erie. Those nutrients are a big driver of harmful algal blooms, such as that which caused a two-day shutdown of Toledo’s water system in 2014.

The new PUCO commissioner chosen by DeWine will start on the job after outgoing commissioner Tom Johnson concludes his term in April.