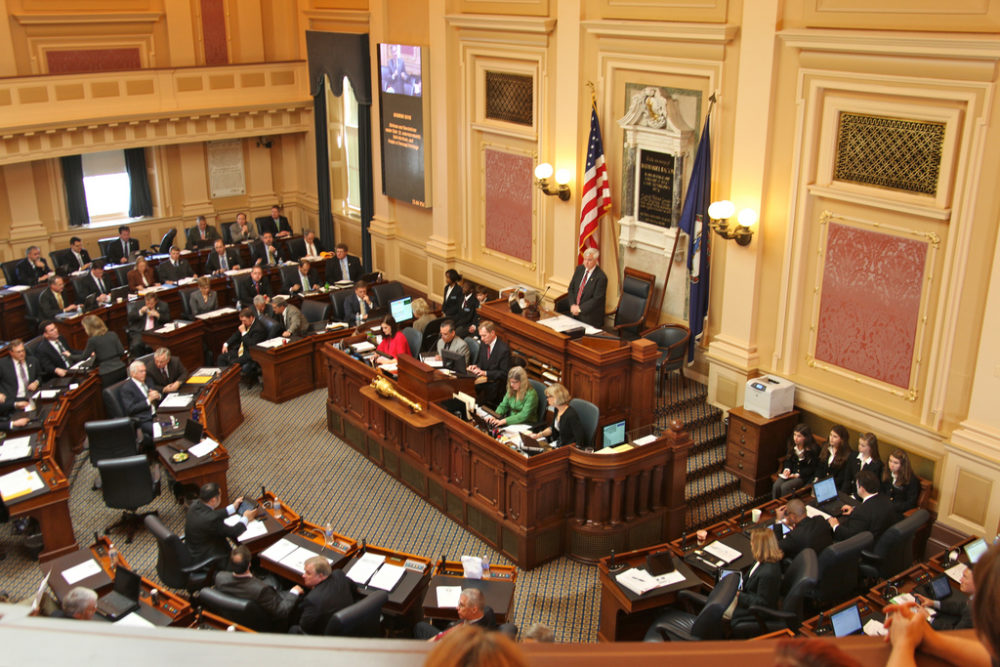 The Virginia House chamber at the State Capitol in Richmond.

An aggressive bill designed to wean Virginia’s electricity sector off of fossil fuels by 2050 failed on a partisan vote in the state House of Delegates late Thursday afternoon. It was defeated 51-48.

Despite the setback, environmental advocates vowed to continue pursuing what they called “a just and equitable pathway to 100 percent clean energy” backed by the state’s Green New Deal coalition.

“Most Virginia voters do not think that solving the climate crisis is a trivial matter or that the topic should be used as a political football,” Harrison Wallace, Virginia director of the Chesapeake Climate Action Network, said after the vote.

He cited a recent poll conducted by Lake Research Partners indicating that 73 percent of the state’s registered voters support an economy built around clean energy.

The fact that such a bill advanced to the full House is evidence that Virginia Democrats, heartened by a recent measure aimed at cleaning up the state’s toxic coal ash ponds, will continue to press Republicans to act on more environmental legislation.

Del. Sam Rasoul, D-Roanoke, reintroduced an amended version of House Bill 1635 this week, optimistic that the changes would attract some Republicans. It had advanced out of the Committee on Commerce and Labor.

If passed, the bill would have shifted the state’s clean energy standard to require 30 percent clean electricity by 2030 and 100 percent by 2050.

Rasoul has introduced multiple green measures during this legislative session. A separate one would require the state to conduct an inventory of its greenhouse gas emissions from all sectors.

Environmental advocates say they have continued to hold out hope, even though they know these types of bills are an uphill climb as long as Republicans cling to narrow majorities in both chambers of the General Assembly.

Before Thursday’s vote, Wallace called Rasoul’s measure “the first real climate policy with teeth that will be heard on the House floor.”

Wallace told the Energy News Network that the proposal was miles ahead of Virginia’s current renewable portfolio standard, a voluntary program aiming for a 15 percent clean power goal by 2025.

He praised the bill for not only aligning with the Green New Deal, but also addressing low-income communities and workers transitioning out of jobs in the fossil fuels industry.

The expansive bill would have required state authorities to prepare a draft climate plan that addresses agriculture, heating, cooling and transportation by March 2020.

It also includes several environmental justice angles that would be especially pertinent to the state’s Hampton Roads region, where sea level rise continues to be a looming issue.

For instance, the measure would have required that one-fifth of all funding allocated to deal with climate change be targeted for low-income and minority communities. Another fifth of that funding would target sea level rise mitigation and flooding adaptation.

Wallace said he was disappointed that Republicans representing Hampton Roads voted against the bill.

“By opposing a compromise amendment,” he said, “coastal Republicans have officially taken ownership of the damage and destruction associated with sea level rise in their districts.”

The legislation also called on state agencies to coordinate a program that extends job training, relocation assistance, education and temporary financial support to assist workers transitioning from the fossil fuel and nuclear power industries to the clean energy sector.

“In the grand scheme of things, this bill is the absolute baseline of what’s needed to address the climate crisis,” Wallace said. “It allows Virginia to begin catching up to our neighboring states … and the rest of the East Coast.”

Rasoul was first elected to the House in a 2014 special election.

Republicans have a 51-49 edge in the House and 21-19 advantage in the Senate. All seats are up for election this November.