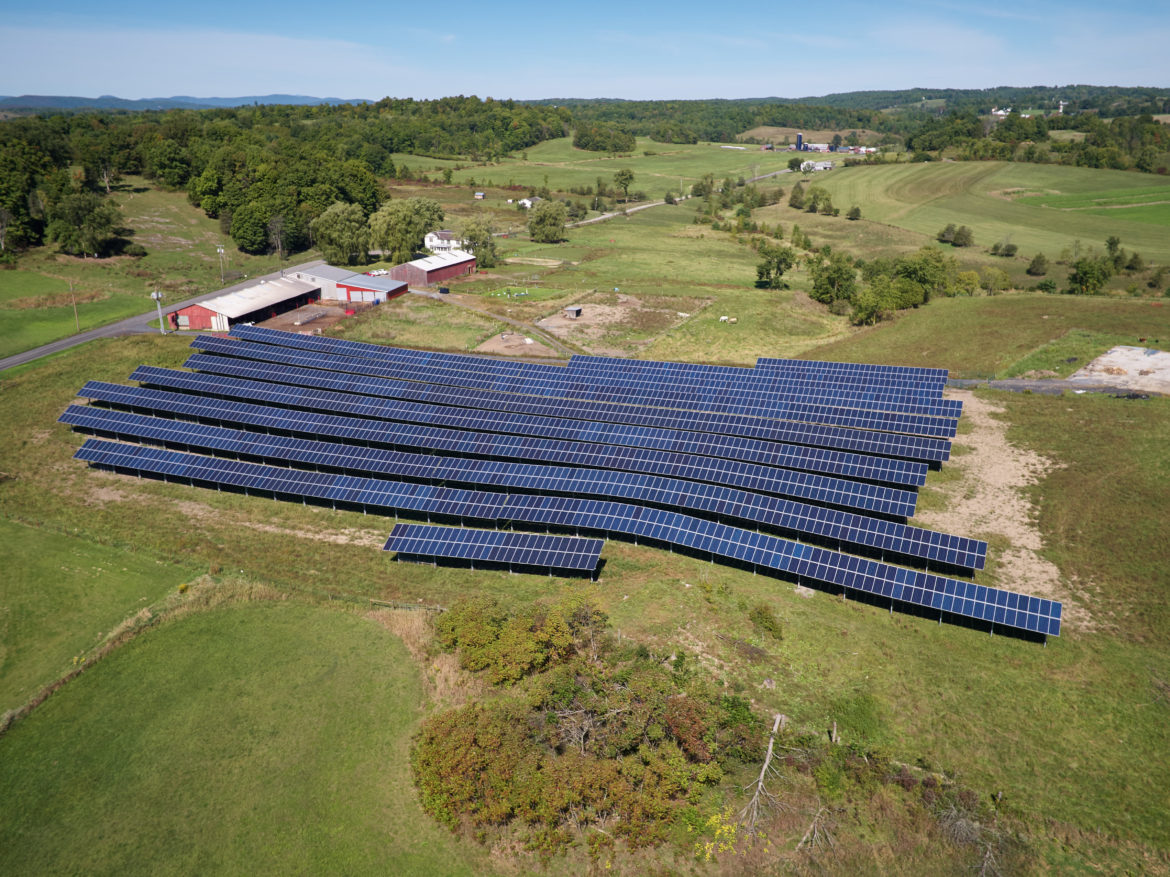 A 500-kilowatt array covering 5 acres of a Benson, Vermont, farm allows cattle to graze in areas shaded by solar panels.

Despite some promising experiments, a new state tax policy could make it harder to pair farming and solar.

When Greg Hathaway took over a 650-acre farm in Benson, Vermont, financially challenging dairy cows were out, and beef cattle with a new slaughterhouse were in. And another new “harvest” was planned, one that required a small land commitment but promised a guaranteed income.

That crop was renewable energy in the form of a 500-kilowatt solar array on 5 acres, and the yield was lease payments for 25 years.

“It was part of my business plan when we bought the place in 2012, so we started to research it,” said Hathaway, the owner of Maple Ridge Meats. “We got a lease and continue to use the land like we did before.”

He partnered with a solar developer to allow development of a small solar array while Hathaway could keep the land in agricultural production. Using that land means having animals intermittently graze in areas shaded by solar panels in the summer or rotating through it as a winter feedlot.

“As far as I can see, it’s a win-win. We do what we can, the cows graze and nobody pays much attention to the panels in their daily routine,” he said.

Pairing renewable energy and agriculture has been an initiative of the Vermont Agency of Agriculture, Food and Markets for several years. The benefits extend beyond helping the state reach its goal of 90 percent clean energy by 2050. Generating electricity on farms can reduce expenses and create steady new income streams.

“We’re glad to make the connections between solar developers and farmers and to find accurate information on contracts and budgets. That’s our role in helping farmers with new enterprises,” said Alex DePillis, senior agricultural development coordinator for the Vermont agency. “We also have a separate role to review any energy project for its impact on farmland, and we provide guidance to project developers on how to build a site so that it can eventually be decommissioned and returned to productive agriculture.”

Farming’s compatibility with solar energy production has been pursued for several years, particularly with livestock grazing. An experimental program with an exotic crop is also underway.

Finding a proper grazing site is one piece, but installation presented a challenge at Hathaway’s farm that was overcome.

“My job as a solar developer is to find acreage of developable land not too far from three-phase electricity lines. Farmers are usually the best source of that land,” said Sam Carlson, director of solar project development for Green Lantern Solar, which owns the array.

One issue is that cattle, often 1,200 pounds or more, could damage an ordinary solar installation. “We weren’t quite sure how the cows would take to it, but they actually like to scratch themselves on the posts,” Carlson said. 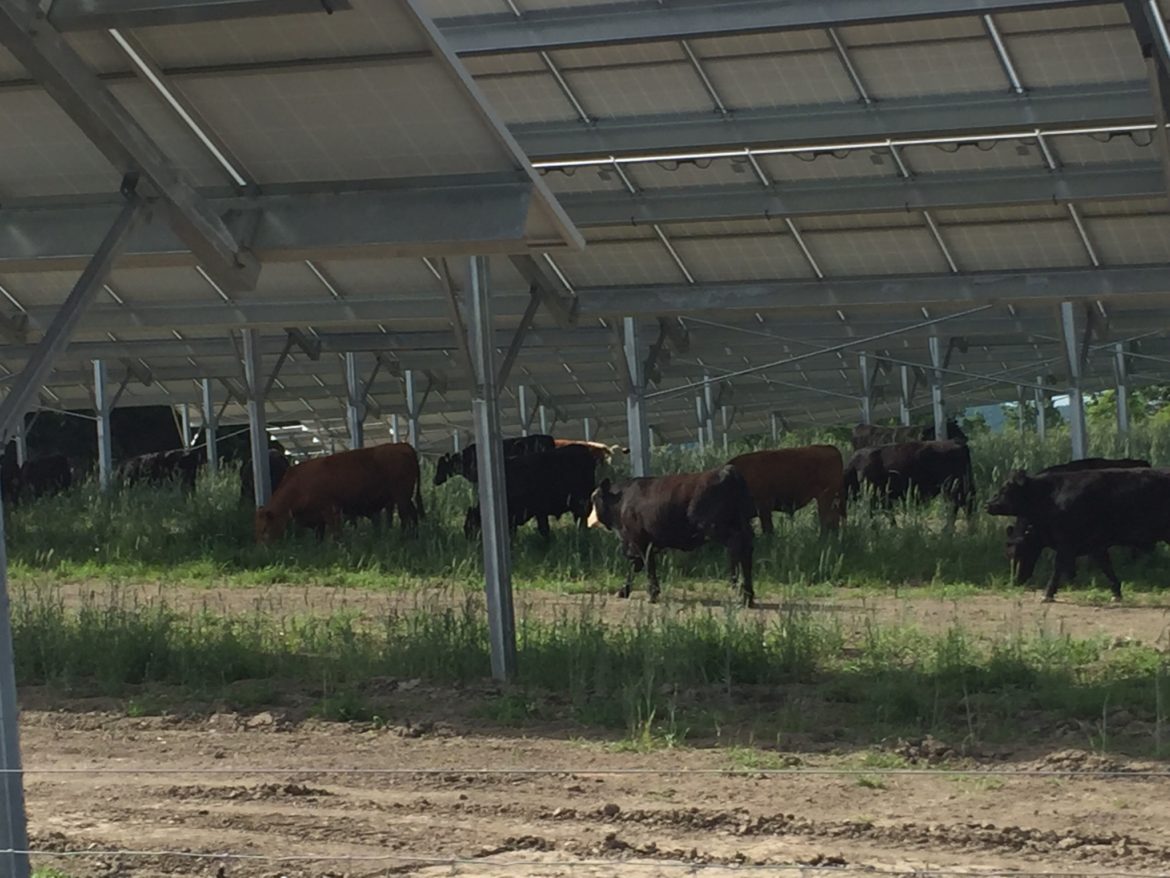 Cattle graze among solar panels on a different farm.

Their size required extra engineering, and costs to the developer, to make solar work on a farm. Support poles must be dug deeper, up to 10 feet into the ground, and panels must be raised an extra 3 feet or more to provide clearance for the animals. Arrays, angled at 30 degrees, are at least 6 feet above ground, instead of 3 feet, and exposure to stronger winds at the higher top ends requires additional support braces.

Although the additional engineering and construction added about $50,000 to the development cost, the project still made sense for Green Lantern.

That additional expense is avoided with installations among smaller ruminants like goats and sheep.

“The question I mainly get is if they are compatible,” said Kimberly Hagen, grazing specialist at the Center for Sustainable Agriculture at the University of Vermont Extension. The answer, she said, is definitely yes. Animals can graze beneath the panels and enjoy shade while eliminating the need to cut the grass using machinery.

“I’ve had three solar owners interested in having sheep graze among their panels, but the bottleneck has been there aren’t that many shepherds around with a flock of sheep they’re willing to truck around,” she added.

Financial issues and logistics are easily solved if the animals are grazing alongside solar panels on their owner’s farm, but challenges exist for grazing at stand-alone solar sites. These include security from predators, available water and the cost of transporting among locations.

One promising project pairs solar energy with the growth of an exotic plant.

Combining solar arrays with plant production is part of an ongoing research project by UVM’s North American Center for Saffron Research & Development. UVM and Peck Solar completed the first year of a three-year trial to test the compatibility of growing saffron under or around solar panels.

Saffron has flavored food and refined perfumes for millennia and is primarily grown in Iran. The research project is determining if the plants could be grown in northern New England. The addition of high-value crops at farms is appealing to agricultural interests and academia as a way to sustain financially struggling operations.

Saffron can command retail prices of $3,000 to $9,000 a pound, and initial results of the trial are promising.

Steve Yates, solar project manager at Peck, which owns the 1-acre test site, said the first trial last year involved plant beds that were placed in front of, underneath and behind the 150-kilowatt solar arrays. The saffron plants, which are late-season flowers harvested in October, thrived under the panels, where late-summer sunlight reached the plants at a lower angle.

Plans for this year, the second year of the trial, include planting the entire acre.

“One of my big goals is to keep the farmer on the land and solar is a great way to do it, by taking a piece of property — one that isn’t usually that productive or valuable — and creating revenue for them,” Yates said.

But changes in tax policy at the state level could upend opportunities for these combinations. In the name of farmland preservation, and to prevent viable agricultural sites being turned into solar fields, sites have lost their agricultural exemptions and are taxed as commercial sites.

“The Legislature has taken a stance regarding green fields installation, that if you put in solar it removes it from agricultural use,” Yates said. “That’s disappointing because there are many ways you can use it even with solar.”