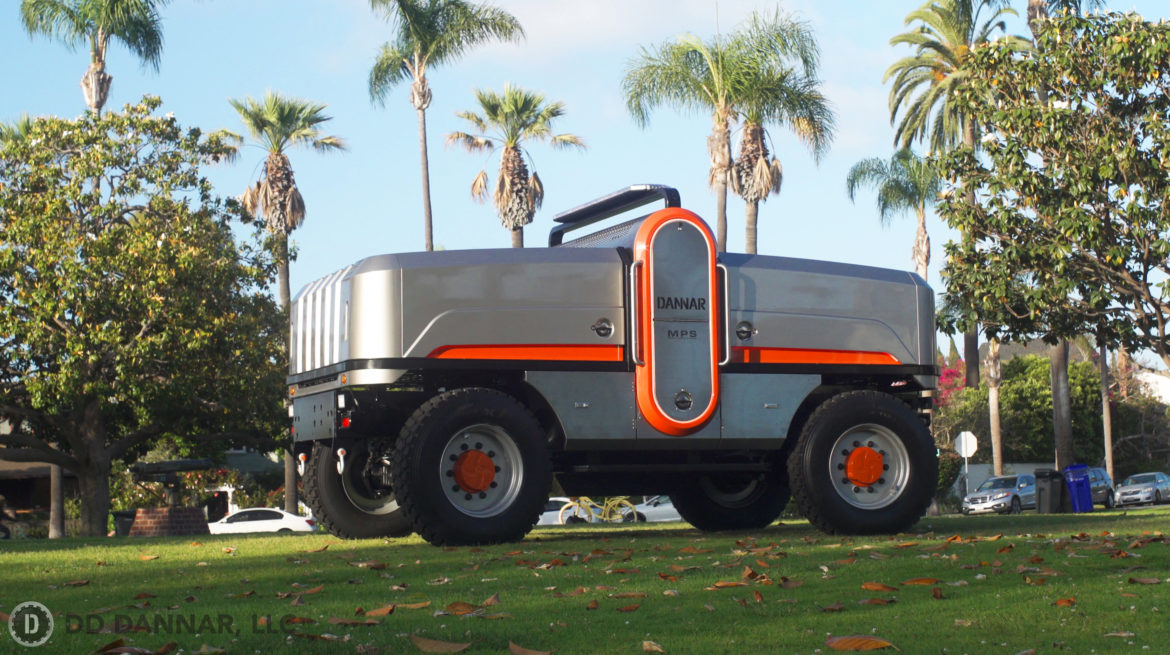 As California leaders grapple with fallout from the Pacific Gas & Electric Company bankruptcy, they are simultaneously debating how to prevent the state’s neglected power grid from sparking more wildfires.

To prevent fires from dragging other utilities into bankruptcy, regulators floated an idea at the end of last year: selectively shutting down power to parts of the grid on hot, dry and windy days when the risk of wildfire is highest.

Such planned outages would create a need for emergency backup power, and an Indiana clean energy technology company thinks it has a novel solution: off-road heavy duty equipment that can be tapped as a mobile battery during an emergency.

Most of the time, Dannar’s mobile power stations operate as electric forklifts, multi-purpose cargo trucks, or other engineering vehicles, which provide an emissions-free alternative for cities that typically rely on diesel equipment. During an emergency outage, they can provide backup power to emergency service operators, community centers, or any other place with critical power needs.

“Grids, in times of emergency disasters, generally go down,” Gary Dannar, founder and CEO, said in an interview. “During wildfires electricity is as important as life support, or as air and water. Emergency firefighters and emergency responders cannot do their job without electricity.”

Further, a city trying to dispatch and distribute generators quickly during an emergency isn’t practical. “It doesn’t work,” Dannar said. “Even standby generators that already are in place many times do not work. … Having your energy on wheels that can be distributed and mobilized is a first and very strong strategy for making sure you can respond to emergencies.”

The company’s equipment is powered by multiple BMW i3 battery packs. The number of batteries depends on the model. The mobile power station maxes out with 12 battery packs that can provide 504 kilowatt-hours of energy. At minimum, the company says it’s enough charge two electric cars or perform a day’s work on a job site. Fully loaded, the company says it can power 17 homes for 24 hours.

California cities are looking at investing in the mobile units to bolster local wildfire resilience. Rachel DiFranco, sustainability manager for the Bay Area city of Fremont, saw a Dannar demo recently. While the city hasn’t made any commitments, DiFranco said the city is interested in the technology.

Fremont recently installed microgrids at three of its fire stations. “The idea of having backup power that could be connected to renewable energy system like solar and then actually be detached and deployed to an emergency site in the event of an emergency could be a key next step.”

Last year, Dannar announced it was partnering with the San Joaquin Valley Air Pollution Control District to pilot its mobile power stations at the Port of Stockton. The two battery-electric, 30,000-pound-capacity forklifts are the first zero-emission mobile power stations in the state. The forklifts charge on DC fast chargers installed by ChargePoint. The California Air Resources Board, or CARB, helped fund the project through the state’s cap-and-trade initiative. Their goal is to accelerate the commercial deployment of electric vehicles.

Maritess Sicat, CARB’s mobile source control division branch chief, said in a statement that the station will reduce costs at the Port while helping to reduce emissions for the community. “This project is a great example of how the Cap-and-Trade program is fighting climate change while improving local air quality and delivering benefits to disadvantaged communities,” she said.

While Dannar executives declined to reveal where the next deployment will be, they’ve been crisscrossing the state in recent months as they make the case for the technology. A key supporting argument is its versatility in day-to-day operations.

“One of the interesting things about the mobile power station is that people in different environments are really selecting what their needs are,” said Donna Marie Bertrand, who has been on the ground here for Dannar and is the company’s director of communications.  “At the Port of Stockton with the forklift … they use it for unloading ships. The city of Denver — we just demonstrated there, and they decided to fix a snowblower to it.”

How widely Dannar’s roving power station will be adopted in California remains to be seen. State leaders, regulators, and the utilities are in agreement that the power grid must be fixed in order to prevent more wildfires and cities need to build resilience. PG&E requested a rate increase of nearly $2 billion from its customers to make improvements, but a lot of that money will be spent on traditional grid upgrades, smart meter deployments, and tree and brush management.

While the plan is still under debate, PG&E’s proposal didn’t include any mention of microgrids, let alone off-roading power stations. Still, Dannar thinks its product, which is waterproof, could be a great solution.