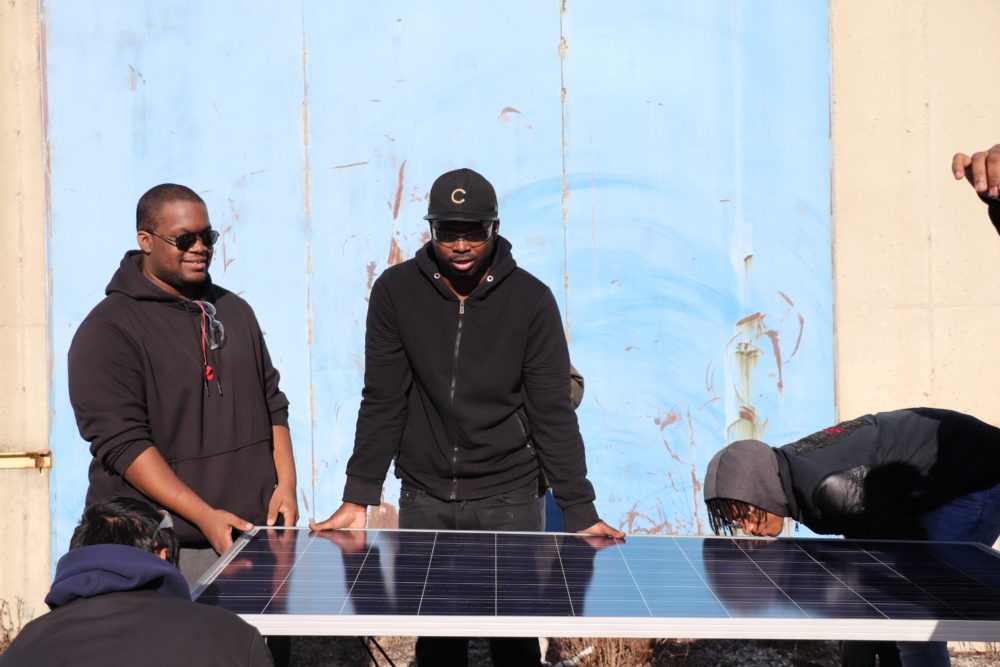 Students Jae’Lyn Ross, Rufus Davidson and Simeyon Smith guide a panel to the base of the array. 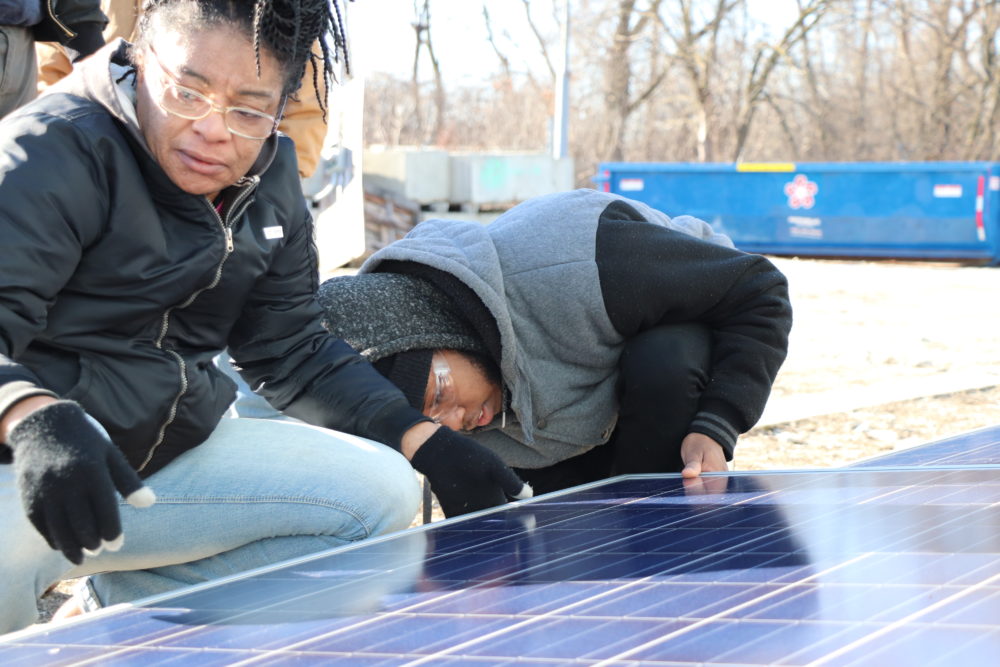 Students Sharon Long, 53, and Tremain Winters, 18, help align a photovoltaic panel with the tub-like base for the solar array. 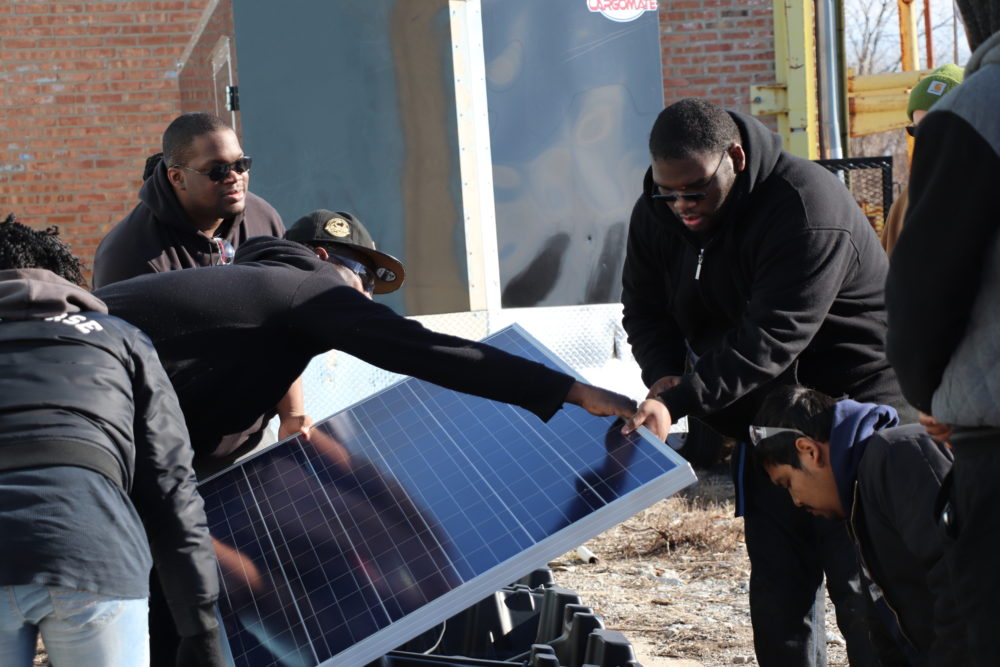 There was an energy about the 11 students gathered on a sunny December Saturday outside a South Side Chicago construction shop.

Today, they’d put on their work gloves and protective glasses and put to the test all that they had learned in the introductory solar-energy course they’d taken at Olive-Harvey Community College. Today, they would construct an eight-panel, self-ballasted array that, if connected to an energy grid, would produce 2.3 kilowatts of power.

“At 2.3, it won’t power someone’s home, but it might be the size of a system that fits on someone’s rooftop or residential house,” said Robert Hattier, a business representative for the International Brotherhood of Electrical Workers Local 134. But this system would both come to life and get broken down in a span of about four hours, when all the parts would be carted back into storage until another round of students is ready to learn the process.

Hattier, along with other IBEW-affiliated electricians, was tasked last semester with teaching one of the first community college-level solar classes funded by the Future Energy Jobs Act. The majority of the students enrolled in the program at Olive-Harvey were recruited by environmental justice group People for Community Recovery and live in Chicago’s Altgeld Gardens public housing complex. Other students learned of the program through Dunbar Vocational Career Academy High School.

Advocates believe the 2016 energy law and dropping prices for solar installations can help make Illinois a leader in solar energy — and that schools are a key place to start. The Illinois Solar Schools program funded by the Illinois Clean Energy Community Foundation introduces K-12 students to solar energy; meanwhile, funding under FEJA has made the training more accessible to a population who could benefit more immediately from the job opportunities: community college students, especially residents of low-income regions like Chicago’s South Side.

“One of the primary missions of the local community college system is to prepare students for both jobs of today and jobs of the future,” said Matt Berry, a spokesman for the Illinois Community College Board, which approves of solar classes that are for academic credit. Because of increasing demand for renewable energy, teaching those trades at the community college level is becoming increasingly important. 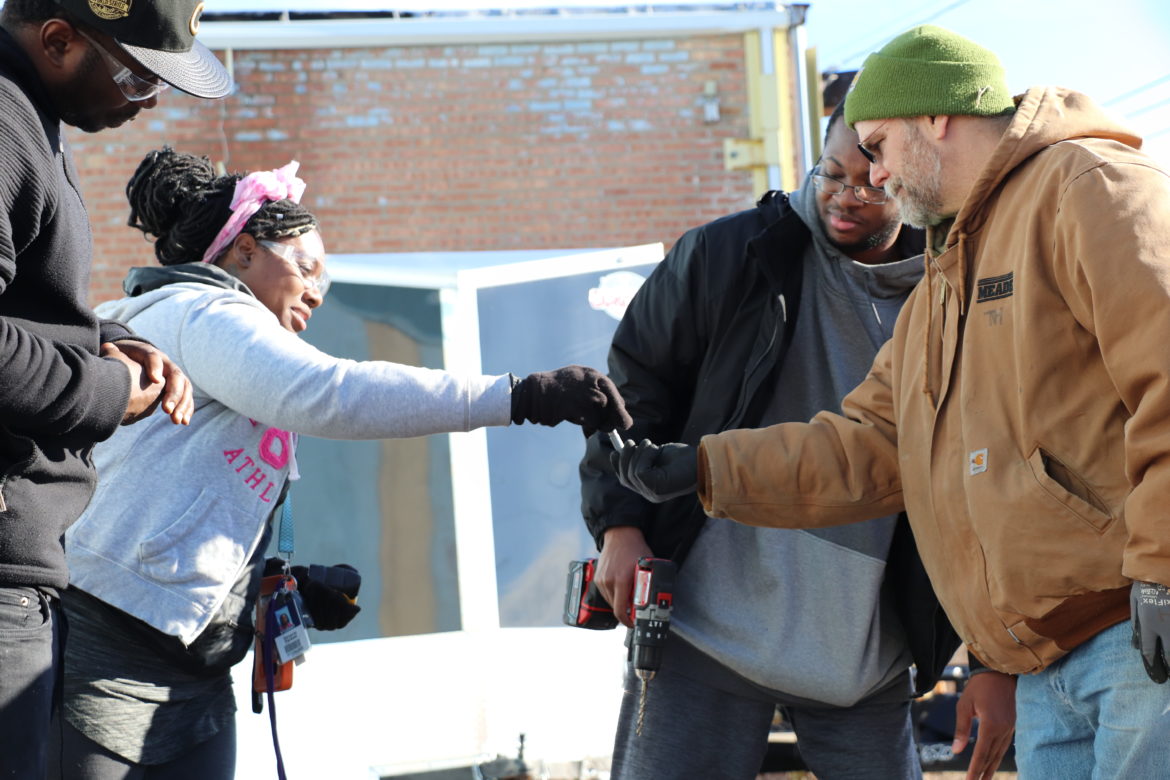 As one of the Olive-Harvey students recruited from Altgeld Gardens, Sanavia Pickett received a stipend that included money for transportation to attend the class. That’s because one of FEJA’s goals is to provide solar jobs and training in low-income areas.

The 31-year-old said she wants to learn about solar energy in order to prepare herself to work abroad somewhere in Africa, likely Nigeria, where she said she wants “to help build.”

“It’s like seeing your family, from a distance, struggle. And you’re over here, living good, right? You see that, and you want to help,” Pickett said of her plan to learn more about solar energy, study nursing and then apply those skills abroad.

Pickett and other students said they were especially excited about building the array. “I’ve been begging for it,” Pickett said, a smile cracking across her face.

On build day, several of the students expressed similar glee as Hattier and Tracy Hall, a retired electrician and IBEW 134 member who co-taught the class, delegated responsibilities.

“Help out, young man, help out!” 39-year-old student Rufus Davidson said playfully, while a few of his classmates guided one of the panels to the base of the array.

Many of the students said they wanted to pursue a career in solar energy, or at least apply to the IBEW’s pre-apprenticeship program and see where that went.

“It’s interesting because it’s something I want to do in the future,” 22-year-old Jae’Lyn Ross, hovering over a stack of PV panels, said of the opportunity to put together an array.

Solar energy made its way into Illinois classrooms years ago. Through programs like Illinois Solar Schools, begun in 2006 by ComEd’s Illinois Clean Energy Community Foundation, hundreds of K-12 institutions have installed solar panels for the purpose of getting youths excited about science, technology, engineering and math — and about renewable energy.

‘One of the primary missions of the local community college system is to prepare students for both jobs of today and jobs of the future.’

“The whole point, really, is that the kids can see the technology,” said Gabriela Martin, the foundation’s energy program director.

But at community colleges, the demand for solar education is more urgent because those students tend to be seeking jobs. Thus, even prior to FEJA’s passage, several community colleges across Illinois have taken up the mission.

The College of Lake County in Grayslake has earned accolades for its eco-friendly offerings; its science building, said sustainability manager David Husemoller, boasts 187 photovoltaic panels that can supply 56.1 kW of power — and the community college plans to install more. The point, Husemoller said, is not just erecting the panels. “We’re helping students to think about the world in terms of sustainability.”

He said the College of Lake County’s solar system serves as a lesson in green energy for people outside of the school, as well.

“[Schools with solar programs] are teaching the students, and they’re teaching their parents,” he said, adding that when institutions like schools are outfitted with solar panels, community leaders and voters also can benefit from the knowledge of renewable energy’s advantages. “When we hear the bad news about climate change, we don’t need to get all upset about it; we can say, ‘hey, let’s do something about it.’”

There are three Illinois community colleges currently offering course credit in solar technology and through which the students earn certificates, according to the Illinois Community College Board. Meanwhile, there are seven that have programs in “renewable/sustainable energy technology.”

The College of Lake County, for instance, offers an alternative energy technologies certificate — which, according to the school’s website, is intended for students seeking “entry-level positions as technicians working on installation of solar, wind or geothermal energy technologies.”

That school, plus 38 others, are members of the Illinois Green Economy Network, which advocates that community colleges teach all sources of renewable energy. It sees community colleges as paving the way for cities to adapt to a changing climate and energy market.

Community colleges are providing “renewable energy education for multiple stakeholders to update the workforce and advance [the] deployment of innovative technologies,” the group says on its website. That means schools like Kankakee Community College, which offers a solar-photovoltaic certificate and specialization track, are adding programs to help train that workforce. 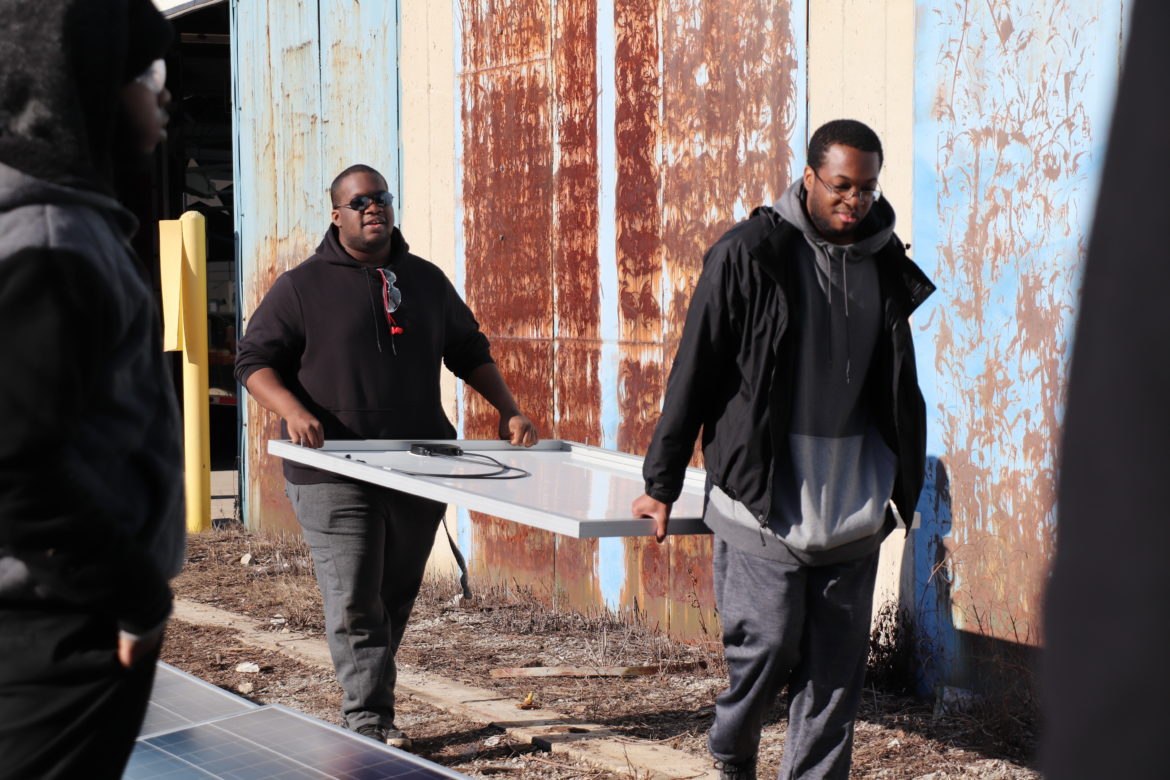 Jae’Lyn Ross and Nicolas Ross bring their classmates a panel to mount to the array.

In Olive-Harvey’s case, funding for an introductory solar course was a result of a wave of investment in solar energy thanks to FEJA’s Solar Craft Apprenticeship Program. The class at Olive-Harvey was the first of its kind for the program.

The program, which received $3 million in 2017 and will receive another $3 million in 2021 and again in 2025, aims to encourage people from low-income and diverse communities to pursue careers in solar through the IBEW’s pre-apprenticeship program.

To get into the pre-apprenticeship program, the students will still have to undergo the application process, Hattier said. But the class will give interested students a “leg up.”

The Olive-Harvey program hasn’t come without kinks. Two days before the students made their way to Calumet Park to build the solar array, IBEW Renewable Energy Fund chief Harry Ohde pleaded with the students during their final on-campus class to get their driver’s licenses so that they could apply for the pre-apprenticeship program, for which registration officially began Dec. 17.

After pulling some strings, Ohde told the class, he was able to get a five-month extension for students without a driver’s license to get one and then apply for the program. Electricians must have a license because their work typically requires contracting across a broad geographical area, Hattier told the class.

“I know it seems like a big hurdle here, but that’s something that’s going to be universal in all the building trades,” he said.

Students said in interviews that the class hadn’t been informed that they needed a driver’s license to apply for the pre-apprenticeship until days earlier.

Reduced access to driver’s licenses is a common barrier to employment in low-income communities and communities of color, according to research from the Employment and Training Institute at the University of Wisconsin-Milwaukee. There are a number of reasons for this, including a cycle of ticket debt and license suspension and reduced state funding for driver’s education courses offered in high school.

Despite the driver’s license complication, many of the Olive-Harvey students said they would apply for the pre-apprenticeship, either on Dec. 17 or at a later date.

On the last day of on-campus instruction, Hattier told the students that going into solar would pay off because of how quickly the industry was growing. Illinois would see an influx of solar jobs at the start of 2019, he said. “It’s going to be thousands of jobs.”

Editor’s note: An earlier version of this story incorrectly identified the funder of the Illinois Solar Schools program.