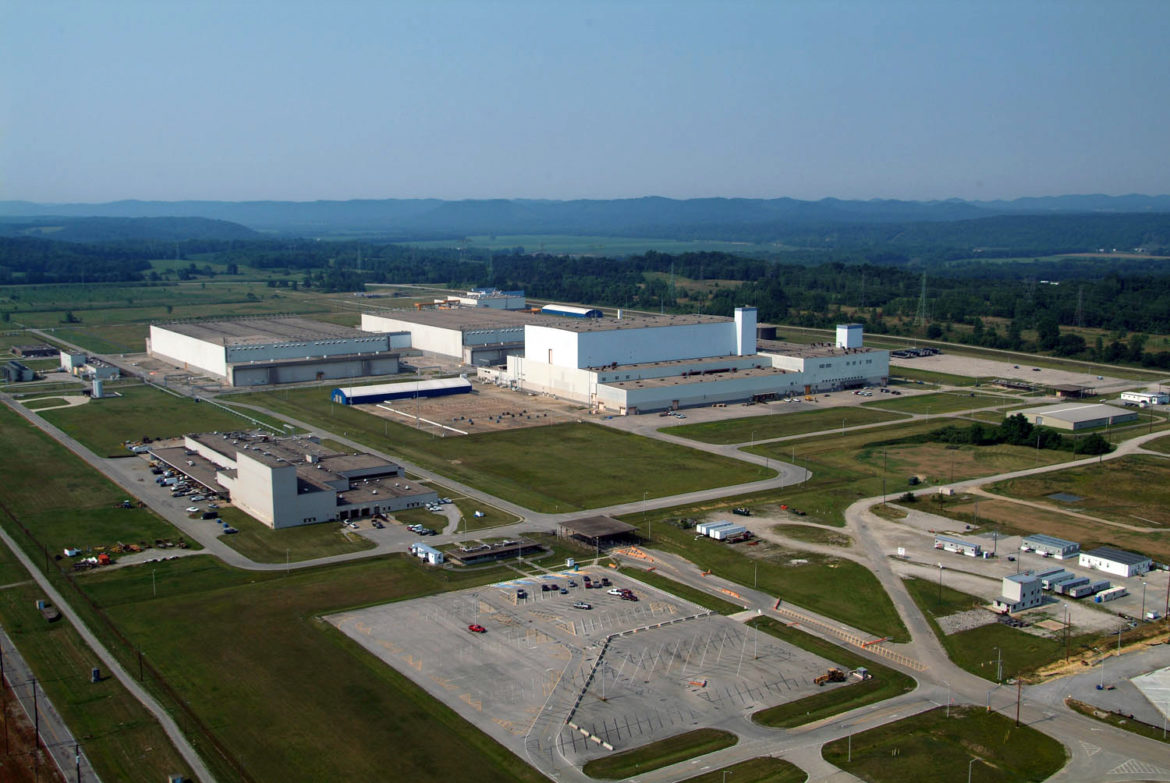 A planned nuclear fuel plant in Ohio could help enable the nation’s next wave of carbon-free electricity, a fleet of small reactors providing continuous power to the grid.

The U.S. Department of Energy fuel facility would be unique in part because it could also produce material for use in nuclear weapons. That crosses a potentially dangerous line, nuclear watchdog groups say — one that could undercut efforts to prevent the spread of nuclear weapons.

The new project would likely resemble an earlier pilot program there that ended in 2015, but with various updates and technical fixes. It would also require U.S.-only sources, in lieu of some foreign components and technology.

DOE is proposing the company as the sole source for the work, and the agency’s notice suggests the demonstration project’s fuel could be used for both civilian and military purposes.

On the civilian side, the project’s fuel would be used for research and development of next-generation nuclear reactors. Designs for those smaller reactors call for fuel known as HALEU, which stands for high assay low-enriched uranium.

HALEU can have between 5 and 20 percent of uranium’s U-235 isotope. That’s the form that undergoes fission readily. In contrast, most U.S. commercial reactors use fuel with 3 to 5 percent U-235. Natural uranium is about 99 percent U-238.

On the defense side, HALEU could be used for small mobile reactors to power on-the-go military operations. Beyond that, DOE’s requirement for U.S.-only technology could also let the plant’s fuel be used to make tritium. That radioactive isotope of hydrogen is used in nuclear weapons.

The possible crossover uses for the Piketon plant’s fuel could conflict with the country’s positions on nuclear nonproliferation.

The United States signed the Nuclear Non-Proliferation Treaty in 1968 in hopes of curbing the risk of global nuclear war. The treaty recognizes the rights of countries to use nuclear power for peaceful purposes but forbids countries that didn’t already have nuclear weapons from building or obtaining them. Supplemental treaties apply to transfers of goods and technology and other matters.

Those treaties account for the “U.S.-only” requirement for any facility or technology that would produce nuclear fuel that could be used for the country’s nuclear weapons program. But critics see a problem in blurring the lines of civilian and military uses of Piketon’s fuel.

“Our entire nonproliferation endeavor where our reactors are concerned has been to prevent our civilian programs from being used in support of military bomb-making programs,” said Peter Bradford, a former member of the Nuclear Regulatory Commission who later taught at Vermont Law School. “One of the pillars of that undertaking has been to keep them separate in the U.S.”

An exception has been the irradiation of rods in a light-water reactor at the Tennessee Valley Authority, using “U.S.-only” fuel. Tritium is then extracted from those rods at DOE’s Savannah River Site.

A dual use for the Piketon plant would expand the fuel supply for those or similar operations. But it would also add another site blending civilian and military uses of nuclear technology.

Meanwhile, the U.S. government has voiced concerns about whether Iran is using civilian nuclear technology as a way to develop or expand nuclear military capabilities, noted Tim Judson, executive director of the Nuclear Information and Resource Service. Yet, he said, “that seems to be exactly what they’re trying to do with this proposal.”

In a similar vein, Assistant Secretary Christopher Ford of the Department of State’s Bureau of International Security and Nonproliferation recently voiced concern about China’s “military-civilian fusion.” Under that policy, the private sector plays a role in helping the country build up its conventional and nuclear military capabilities.

DOE’s plans for Piketon could be read to promote a similar blending of purposes and an intent to step up the U.S. nuclear weapons program.

“Conceptually, I think that is a very bad image for the U.S. to project at this point when the U.S. is trying to dissuade other countries from building their own facilities,” said Edwin Lyman, acting director of the Union of Concerned Scientists’ Nuclear Safety Project. 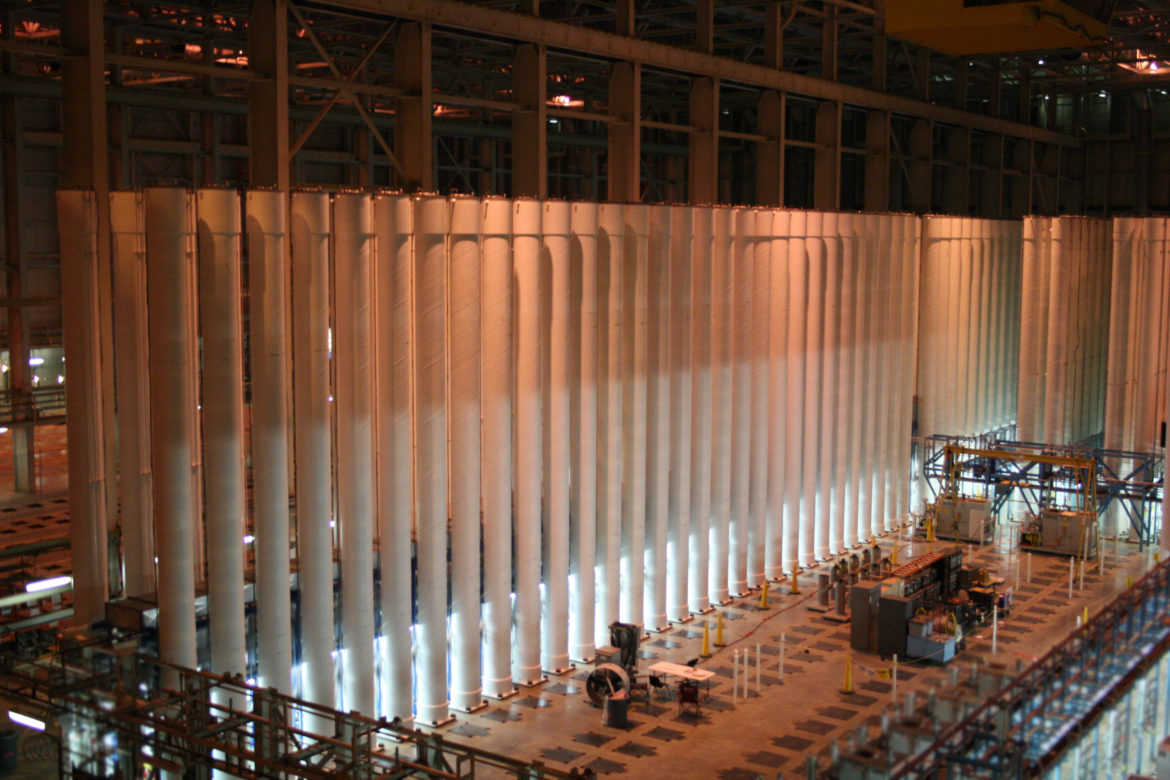 A cascade of centrifuge machines at the American Centrifuge Plant in Piketon, Ohio. The former pilot plant, built and operated by Centrus, was used to show how the technology could be used to enrich uranium. The Department of Energy ended funding for the project in 2015.

One argument for the dual use potential could be to get more bang for the buck from the Piketon project. Because of the nature of HALEU, the same material that could help make tritium to update the nation’s nuclear arsenal could also fuel next-generation nuclear reactors in development.

The project could certainly be good for jobs in the small village of about 2,200 people. Piketon sits on the Scioto River. About one in five people in rural Pike County live in poverty, according to the U.S. Census Bureau. Employment there fell about 10 percent from 2015 to 2016.

Centrus previously built and operated an American Centrifuge pilot plant at Piketon to show how its centrifuge technology could be used to enrich uranium. That project did not require U.S.-only technology, and DOE ended its funding in 2015. At the time, the DOE noted the project had provided useful data and solutions for some technical complications, but it saw “limited remaining value” in further federal support.

Before that, from 1954 until 2001, another part of the Piketon site made low-enriched uranium fuel. That generally has from 3 to 5 percent U-235 and is the form currently used in U.S. commercial nuclear reactors. Cleanup of contamination at the legacy site is ongoing.

Sens. Sherrod Brown, a Democrat, and Rob Portman, a Republican, both applauded the DOE’s announcement last month, stressing that it would help bring jobs back to skilled workers in the area.

“The proposed demonstration is very good news for the entire U.S. nuclear industry,” said Centrus Energy spokesperson Jeremy Derryberry. “If America wants to be competitive in supplying the next generation of nuclear reactors around the world, we need an assured, American source of high-assay low-enriched uranium to power those reactors. We stand ready to work with the department to get the proposed project underway as quickly as possible.” The Nuclear Energy Institute likewise hailed the news.

Kudos also came from the Consumer Energy Alliance. “We continue to believe nuclear will be part of [the U.S. energy] fuel mix, and we don’t ever want to see it completely taken off the table,” said spokesperson Emily Haggstrom. The organization describes itself as a national consumer advocate, although its member list includes dozens of fossil fuel companies and industry organizations.

However, Piketon isn’t the only option for supplying smaller, new nuclear reactors. “There is actually an enrichment facility in the United States in New Mexico that would be capable of supplying any civilian nuclear power plant,” said Lyman at the Union of Concerned Scientists.

Some equipment at Urenco’s site there can already produce HALEU. And on Feb. 5, the company said it is considering construction of a dedicated HALEU facility. HALEU production is also being considered for Idaho National Laboratory.

Centrus Energy, politicians, and local people in the Piketon area are waiting for the DOE’s proposal to be finalized. No other bidders are being considered, so if the project goes ahead, it goes to Piketon.

That “midnight-hour resurrection” of production at Piketon raises “a lot of questions about not only the viability of the project, but the need for it, and the consequences of getting it restarted at this point after this has been shut down for three years,” Lyman said.

“The plan and the intent have been to clean the Piketon plant up and to deal with all the radioactive contamination there,” Judson said. “This is a step in the wrong direction.”