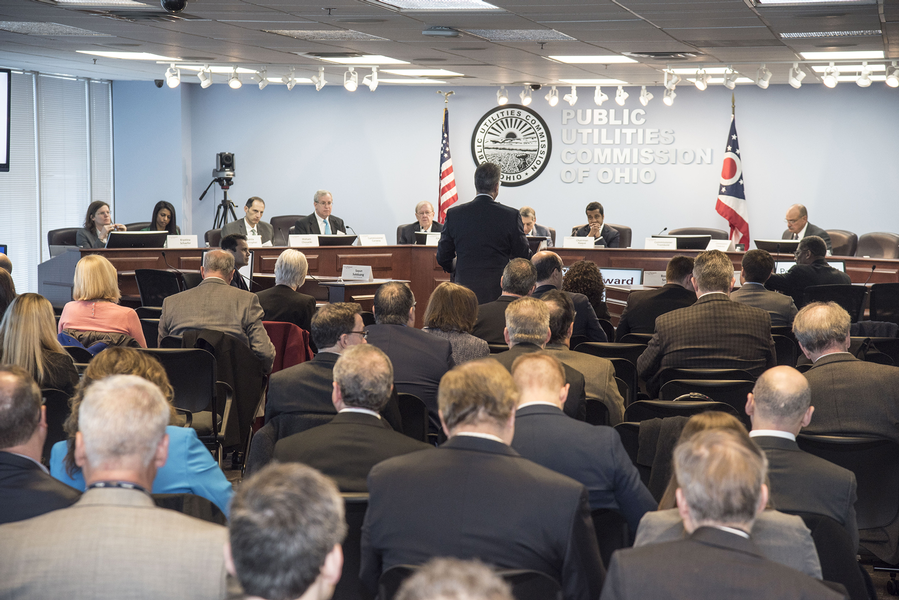 Members of the Public Utilities Commission of Ohio meet in March 2018.

Industry group lobbyist Sam Randazzo has represented several groups before the regulatory board.

The lawyer appointed to chair Ohio’s Public Utilities Commission would face frequent requests to recuse himself from matters involving positions he took on behalf of his past clients, which include large industrial companies and anti-wind energy activists.

Clean energy groups said they would seek to hold Sam Randazzo accountable for potential conflicts of interests if lawmakers confirm his appointment. As PUCO’s chair, Randazzo would also chair the Ohio Power Siting Board, which decides wind farm cases.

“Randazzo has shown a clear bias against renewable energy sources that most Ohioans support, and energy efficiency programs that help consumers save money,” said Dave Anderson, policy and communications manager for the Energy and Policy Institute.

Randazzo, who did not return a phone call or two follow-up emails seeking comment, is the longtime general counsel for Industrial Energy Users-Ohio. He has also represented Marathon Petroleum and wind farm opponents.

“Mr. Randazzo carries with him extreme bias and a long history of working earnestly against cost-effective, clean and efficient energy resources on multiple fronts,” said Trish Demeter, vice president for energy policy at the Ohio Environmental Council. “He has a long history of advocating against clean energy, working in alignment for many causes with electric utilities.”

Randazzo himself raised the question of recusals when he opposed Democrat Howard Petricoff for a seat on the PUCO in 2016. Petricoff had represented wind industry clients, as well as some companies that favor a shift to renewable energy.

That sentiment was echoed by Bill Seitz, R-Cincinnati, who was then chair of the Ohio Senate’s Public Utilities Committee and is now Majority Floor Leader in the House of Representatives.

“Risking 2-2 ties on the commission for lack of a fifth deciding member is something to think about. It’s certainly nothing personal,” Seitz said about Petricoff’s nomination by Gov. John Kasich.

Keith Faber, then serving as Senate president, likewise expressed concern about Petricoff’s “impartiality and the potential for recusal from important cases due to numerous conflicts of interest.” The Senate Public Utilities Committee wound up voting against confirmation of Petricoff, despite his assurances that his prior cases were “all things in the past.”

The issue is broader in Randazzo’s case. As PUCO chair, he would have both a vote and a leadership role in setting the commission’s agenda. Ohio law would also make Randazzo chair of the Ohio Power Siting Board, giving him a say in which renewable energy projects can be built.

Now notices filed last month with the PUCO list more than four dozen matters in which Randazzo has withdrawn as counsel of record for Industrial Energy Users-Ohio.

Similar notices in additional cases reflect recent representation of companies such as U.S. Steel, Timken, Cleveland Thermal and more. Some of those cases are “reasonable arrangement” cases that seek regulators’ blessing for special deals for large industrial customers. Such deals can shift more utility costs to consumers.

“It’s fair to expect Randazzo to at a minimum recuse himself from matters before the PUCO involving former clients like IEU-Ohio and Marathon Petroleum,” Anderson said. “Randazzo should also recuse himself from matters before the [Power Siting Board] involving wind power, given his record of fighting new wind farms and clear bias against this source of renewable energy.”

In one of those matters, Randazzo pushed for adoption of rules that could make Ohio’s current strict setback requirements even more restrictive. Wind industry supporters have suggested those proposals would be “fundamentally unfair” and potentially unconstitutional.

PUCO members have from time to time recused themselves from matters. For example, Commissioner Lawrence Friedman recused himself in a case in which challengers opposed FirstEnergy utilities’ credit support rider. Friedman had previously worked for one of the parties opposed to the charge.

In a judicial context, Seneca County Common Pleas Judge Michael Kelbley recently stepped aside in a case in which landowners are allegedly refusing to honor terms of leases they signed with Seneca Wind, LLC. Kelbley reportedly refused a lease offer years ago and also had a staffer who opposed the project.

Yet even in courts, it’s unclear how broad any recusal requirement would reach. As a general matter, prior statements and positions can be grounds to question whether a judge would be impartial in a case. Yet the Ohio Supreme Court has deferred to judge’s assurances that they would be impartial, even in some cases where it acknowledged reasonable grounds to suspect prejudice against a party or its position.

As in Petricoff’s case, Randazzo can expect to start serving on the PUCO pending a decision on confirmation by the Ohio Senate.

Spokesperson J.P. Blackwood at the Office of the Ohio Consumers’ Counsel congratulated Randazzo on his nomination but also recommended changes to the PUCO nominating process that would include increased transparency and a requirement for at least one of the PUCO commissioners to have been a residential consumer representative.

The PUCO began seeking applications for a second PUCO vacancy on Feb. 11. The deadline for those applications is Feb. 28, and the PUCO nominating committee will meet to interview some of those candidates on March 14.

“The PUCO needs fair and balanced commissioners with open, forward-thinking minds, not biased and entrenched anti-clean energy operatives, former lobbyists, etc.,” said Demeter at the Ohio Environmental Council. “Stacking the commission with extreme points of view housed within individuals does not really create the space for true collaboration and practical solutions that are essential for getting Ohio moving forward again on energy policy.”